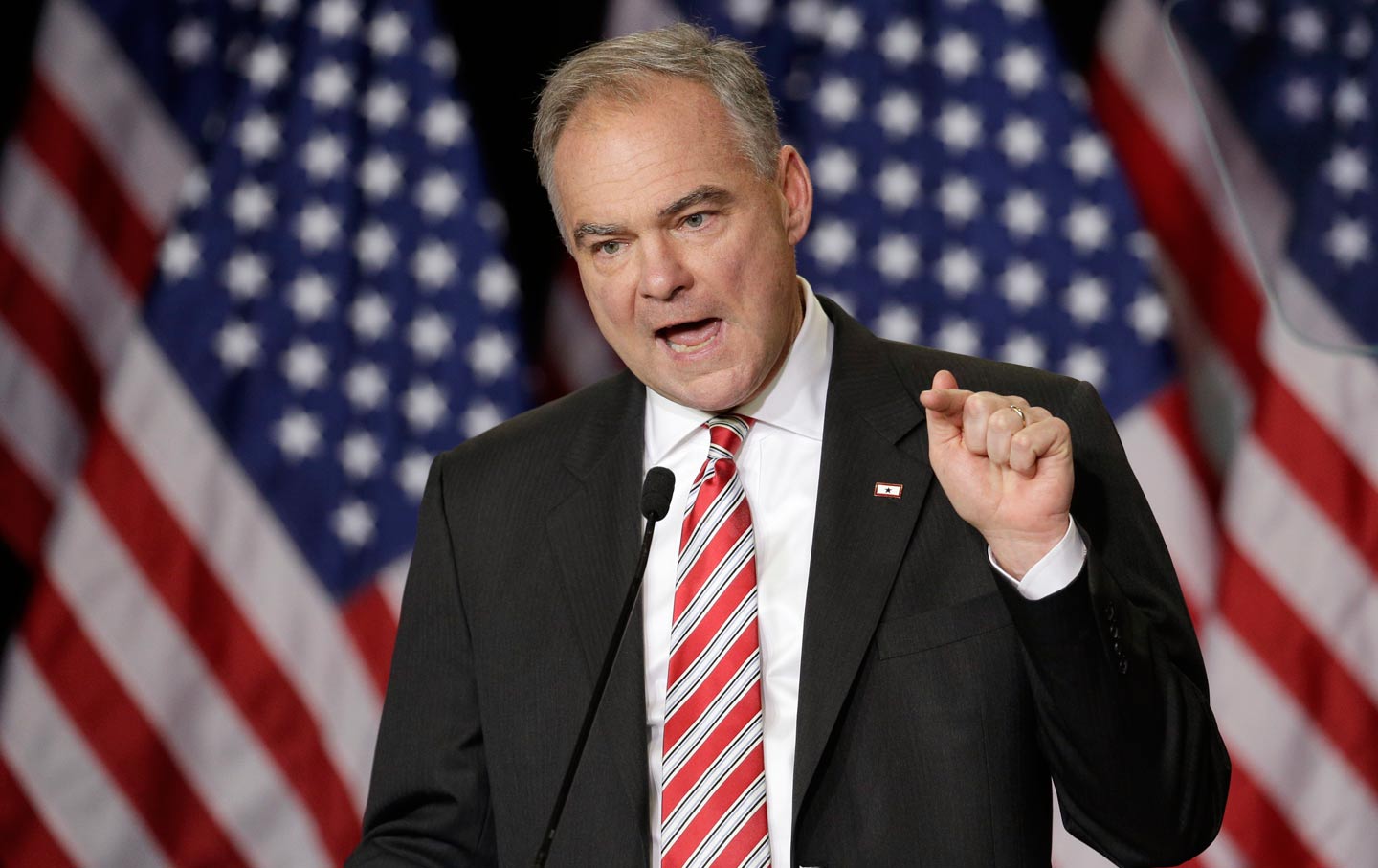 Vice-presidential debates do not generally rank as critical junctures of the campaign trail. But Tuesday night’s debate could be consequential—if Democratic vice-presidential nominee Tim Kaine decides to rip into the Republican party for continuing to practice the sort of “Willie Horton-style” politics that for decades has been recognized as racist.

Republican National Committee communications director Sean Spicer set Kaine up to do just that with one of the most bizarre moves of this most bizarre campaign.

Spicer was so excited about a video produced by Republicans to attack Kaine that the GOP strategist gleefully tweeted out a link to an article headlined: “Exclusive: Republicans Launch Willie Horton-style Attack.”

That headline provided a fair description of the video, which savages Kaine for his work as a defense lawyer, for his thoughtful expressions of concern regarding capital punishment and for deciding when he served as governor of Virginia to commute the sentence of a death-row inmate because of the inmate’s lack of mental competence.

The Capitol Hill newspaper Roll Call observed that the anti-Kaine video “recalls the Willie Horton attack on the 1988 Democratic presidential nominee Michael Dukakis.” In that distant campaign, television ads attacking Dukakis, the well-regarded governor of Massachusetts, sought to discredit the nominee by recounting the story of how some Massachusetts prisoners who participated in a weekend furlough program had committed crimes.

The crudest of the ads, produced by a supposedly independent group, was called “Weekend Passes.” It featured what was referred to as a “menacing” image of Horton, an African-American prisoner from Massachusetts who did not return from a weekend furlough and eventually was charged with committing assault, armed robbery, and rape.

Tim Kaine should scold Republicans for playing ugly political games with matters of life and death.

A parallel ad, produced by the campaign of Republican presidential nominee George H. W. Bush and called “Revolving Door,” featured images of convicts (actually actors) casually passing in and out of prison. The ad did not feature an image of Horton, but it reinforced the message of the previous ad with a script that announced: “As Governor Michael Dukakis vetoed mandatory sentences for drug dealers he vetoed the death penalty. His revolving door prison policy gave weekend furloughs to first degree murderers not eligible for parole. While out, many committed other crimes like kidnapping and rape…”

Crude in its character and content, the ad was decried at the time; but it was also credited with helping to renew Bush’s candidacy. As NBC News has noted, “The ad played into racial fears and is credited with costing Dukakis the election. But it was also widely condemned and Lee Atwater, the former chair of the Republican National Committee who approved the ad, later apologized for it.”

In fact, Atwater acknowledged the “naked cruelty” of his approach and admitted that his statements made him “sound racist.” While Atwater denied that he was a racist, the term “Willie Horton ad” has since 1988 served as a shorthand description for campaigning that exploits racial fears and stereotypes.

No one who is involved with politics is unfamiliar with the reference.

Yet Spicer encouraged Americans to follow the “Republicans Launch Willie Horton–style Attack” link without apology, complaint or a hint of irony. Only after getting hit with fierce criticism—and a good deal of mocking—did a sheepish Spicer delete his tweet.

Spicer was still spinning Monday afternoon: ripping into Roll Call for choosing a headline and analysis that he had been circulating just hours earlier. And he was still pushing the attack on Kaine, as if nothing happened.

“My faith teaches that life is sacred. That's why I personally oppose the death penalty.” —Tim Kaine

This is not just about Spicer’s tweet. This is about the anti-Kaine video, which seeks to renew the discredited politics of 1988 on behalf of the Trump-Pence ticket.

The old anti-Dukakis ad highlighted the fact the the Massachusetts governor “vetoed the death penalty.” The new anti-Kaine ad turns up the volume on the death-penalty demagoguery—claiming that the former governor and current senator from Virginia “consistently protected the worst kind of people” from state-sponsored executions.

After prominently featuring the images of death-row inmates, including the young African-American man whose sentence Kaine commuted because of his “lack of mental competence,” the Republican video concludes: “Tim Kaine—he has a passion for defending the wrong people…”

The anti-Kaine video was released by the RNC with an eye toward getting Tuesday’s debate focused on criminal-justice issues. But the criminal-justice debate has changed a lot since 1988. The Republican National Committee may not have evolved, but America has.

“Support for the death penalty for convicted murderers is the lowest it’s been since President Richard Nixon was in office, according to a new report from the Pew Research Center,” U.S. News & World Report reported this week. “Just under half of Americans—49 percent—favor the death penalty for those convicted of murder, while 42 percent oppose it. Support has dropped 7 percent since March 2015. Support for capital punishment peaked in the mid-1990s, when 80 percent of people were in favor and only 16 percent opposed it.”

The shift in attitude has a lot to do with the recognition of what the the Death Penalty Information Center has described as “the continuing injustice of racism in the application of the death penalty.”

Amnesty International reviewed the data from study after study and determined that, “holding all other factors constant, the single most reliable predictor of whether someone will be sentenced to death is the race of the victim.”

The data led then–US Senator Russ Feingold to say a decade ago, “We simply cannot say we live in a country that offers equal justice to all Americans when racial disparities plague the system by which our society imposes the ultimate punishment.”

Tim Kaine has spoken thoughtfully about racial disparities in our criminal justice system, pointing out that “African-Americans are more likely to be convicted and sentenced to longer prison sentences than white Americans for the same crimes.” And Tim Kaine has a long record of speaking thoughtfully about the death penalty; arguing that, while he enforced the law as governor of a state that permitted capital punishment, “My faith teaches that life is sacred. That’s why I personally oppose the death penalty.”

If the vice-presidential debate turns to issues of capital punishment and criminal justice, Tim Kaine should embrace the challenge—and the opportunity to speak to America about the need for a new and better politics. He should scold Sean Spicer and the Republicans for playing ugly political games with matters of life and death. But Kaine should not stop there. He should speak in detail about his own experience and what he knows. And he should not hesitate to say that, in to move forward, Americans of all partisanships and all ideologies must put an end to “Willie Horton–style” politics.