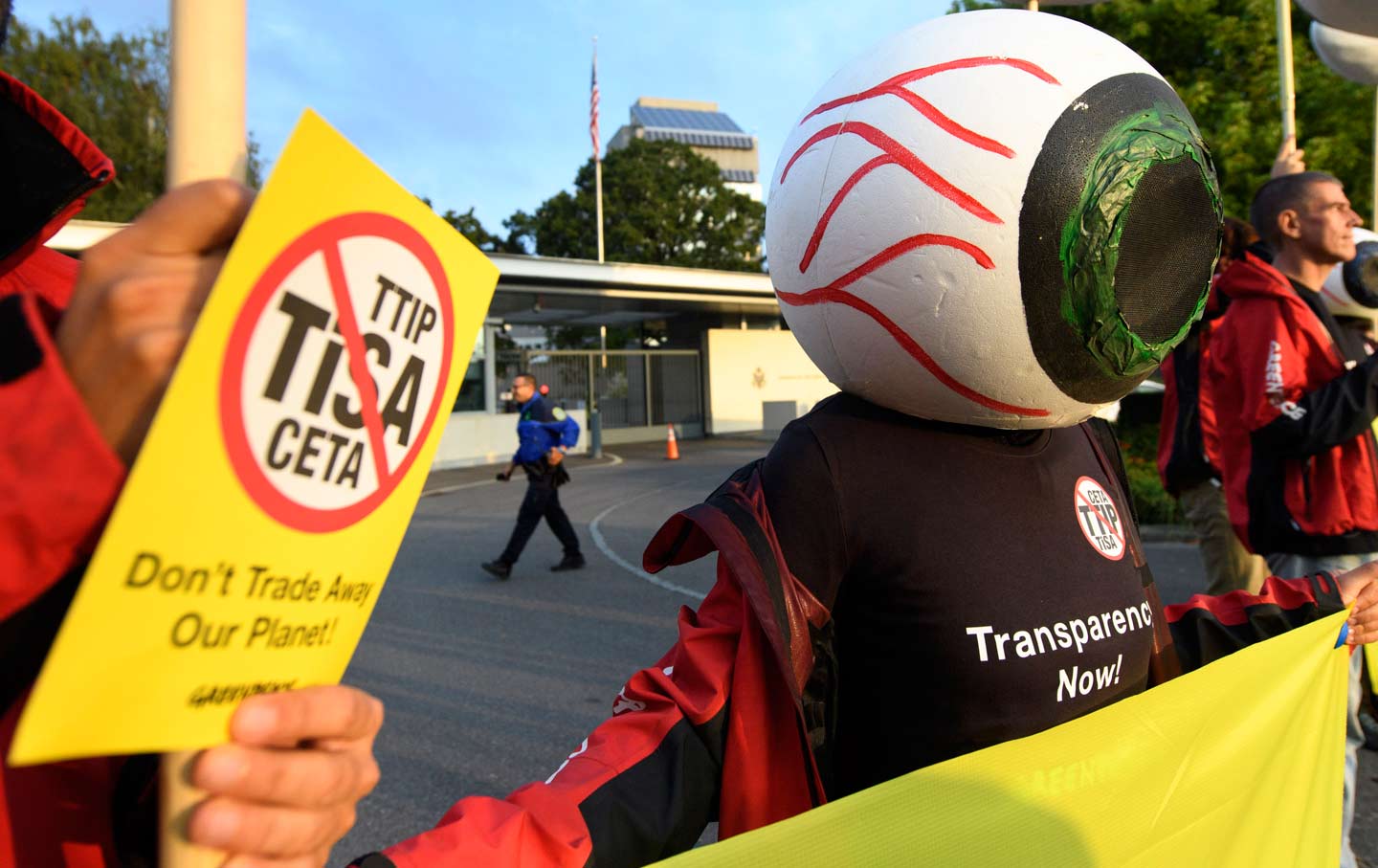 Global and local political conflicts have upended several pending trade-deal negotiations in recent weeks,  derailing negotiations on two other agreements, a deal between Canada and Europe, along with the US-European Trans-Atlantic Trade and Investment Partnership. And the wild card of the Trump presidency could now upend a number of trade deals with the United States, though it’s uncertain which, if any, pending agreements President-elect Trump would scrap. But even before the US election, both inside and outside the US, prospects for the much larger Trans Pacific Partnership, which covers North America and the Pacific Rim, were dimming.

Advocates are now focusing on yet another controversial trade deal being formulated in secretive ministerial talks: the Trade in Services Agreement (TiSA) aims to marketize public services in ways that may reshape environmental policies.

Critics of the deal say TiSA threatens to impose sweeping deregulatory measures that would make it harder for signatory nations to meet the goals established in the COP21 climate treaty, smearing the basic gears of democratic governance with the fossil-fuel industry’s corporate agenda. According to an analysis of draft documents by Public Services International (PSI), a global civil-service union federation, the agreement, which would cover 23 WTO members including big polluters including the US, the EU, Canada, and Australia, might upend core provisions of the COP21 climate treaty by thwarting regulators’ ability to set industrial and environmental standards to prioritize renewables over fossil-fuel energy sources.

The clash between trade and climate agendas will only intensify as the Paris climate treaty, which mandates significant reductions for commercially based carbon emissions, enters into force this month. (Though Trump generally opposes the climate treaty and other carbon regulations and has denounced free trade overall, his campaign was mum on TiSA specifically, and the United States remains within the pending agreement for now.)

For TiSA signatories, PSI points out, the deal would require regulations to be “technologically neutral,” treating every energy source basically equally for the purposes of international trade. This would run counter to the project of collaboratively reducing global carbon emissions.

The “neutrality” concept was debated years ago in early WTO negotiations on trade in the service sectors, but member states ultimately failed to strike a deal. The TiSA negotiations now “are the first time we have seen it being raised and thus represent a new attack on clean energy,” says PSI Director of Policy and Governance Daniel Bertossa via e-mail. As policymakers develop their countries’ individual climate plans, enacting TiSA would “restrict the means by which states could implement necessary measures to reach their COP21 targets. This will complicate and possibly frustrate countries ability to meet their targets solely in order to protect the profits of dirty energy producers.”

PSI argues that “neutrality” is more sinister than it sounds, because it would effectively “reduce states’ sovereignty over energy resources…by requiring states to establish free markets for foreign suppliers of energy related services, thereby removing the right to nurture infant industries and ensure domestic economic benefits from exploiting energy resources.”

For example, a government might face direct corporate opposition when trying to cap the expansion of natural-gas fracking by multinational investors—since TiSA technically mandates neutral treatment for basically all energy sectors (unless countries carve out a specific exemption), regardless of how dirty they are, PSI argues. TiSA could even discourage local workforce development on multinational projects, with provisions to “prevent governments from prioritizing contracts with companies who hire local labor, undermining the generation of jobs domestically and the development of a national workforce.” Instead of hiring local construction workers, TiSA’s would potentially “shift further power to these same foreign firms to give them the full flexibility to hire whomever they want.”

One potential target PSI cites is Nigeria’s local procurement rule, which gives priority in contracting to “Nigerian indigenous service companies” that “demonstrate ownership of equipment, Nigerian personnel and capacity to execute jobs in the Nigerian Oil and Gas Industry.” TiSA is poised to mow down such regulations in the name of “free trade.” By doing so, TiSA’s framework equates market freedom and efficiency with running roughshod over state programs aimed at promoting local equity. Such policies are vital for economies like Nigeria’s, which has suffered historically from neocolonial multinational “development” deals in its embattled oil industry.

TiSA additionally aims to deregulate core civil-service sectors, including environmental and health regulators, while decreasing corporate oversight. Labor and environmental advocates fear this would create a fox-guarding-the-henhouse scenario, with trade privileges restricting the leverage of environmental agencies, including many in countries with already weak regulatory regimes, to clamp down on polluters and drive transition to sustainable energy sources.

PSI warns: “Such a move could open up services delivered at a local level such as water, waste, health care and education to the profit making incentives of multinational corporations.”

According to opponents, these corporation-friendly provisions utterly fail to take into account varying levels of development as well as regulatory sophistication in poor countries. In the end, they will also make it easier to exploit the markets of the Global South—by directly attacking their democracy. Services are especially vulnerable because they are so deeply tied to public resources, such as utilities and public health systems.

The Wikileaks analysis of the domestic-regulation provision portends major threats to the public-service sector by forcing it to open up local policies to scrutiny not only by trade partners but also by the corporations that would be regulated. These provisions could apply to “regulations at any level of government.” A giant multinational like Peabody therefore might try to leverage these provisions when negotiating to establish new facilities in another country.

Wikileaks reports: “The scope of the annex is so broad—applying to measures that relate to licensing requirements and procedures, qualification requirements and procedures, and possibly technical standards–and the definitions of these categories of regulation so all-encompassing that it is hard to think of any regulation that would not be covered.”

The COP21 treaty was designed to set a new global environmental standard. But advocates fear this rare official consensus is being undone in secret by corporations and industry-friendly trade ministers that are invested in weakening the treaty. By deregulating free trade across massively unequal economies, polluters are spreading an environmental crisis that transcends all borders.