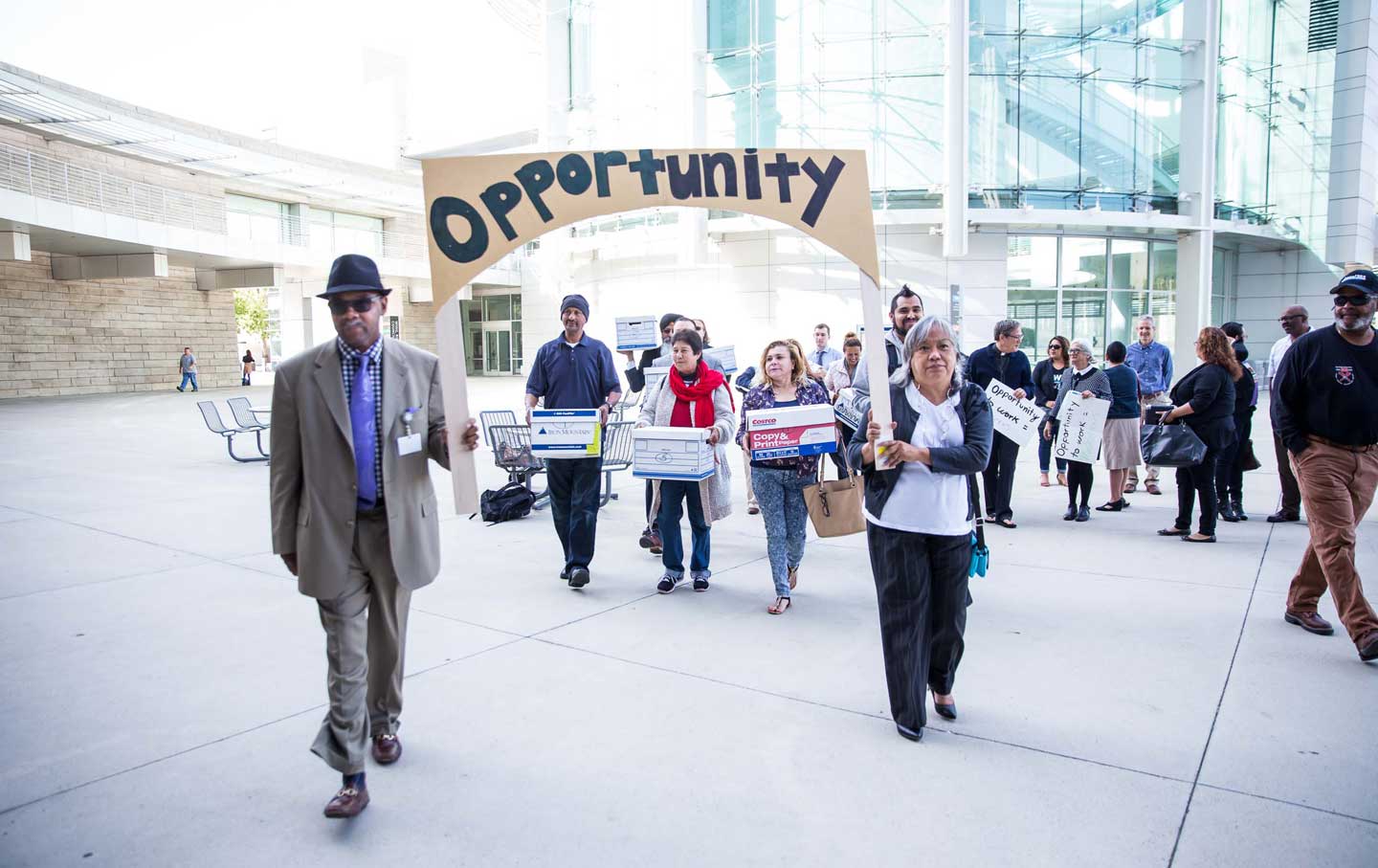 Workers and Silicon Valley Rising activists deliver signatures in support of the Opportunity to Work initiative to the City of San Jose. (Tri Nguyen)

Many workers across California will punch in at their jobs with a little more confidence on January 1, 2022, when the statewide minimum wage will reach $15 an hour. But others will punch out before the new hourly wage has a chance to make much of a difference.

California’s low-wage economy is a function of two factors: too few dollars per hour, and too few hours per week. Often, it’s both, which adds up to an unlivable wage. The $15 minimum wage addresses just one side of the equation, and advocates for low-wage workers want to make sure that the new minimum wage comes with workdays long enough to earn a living.

The 162,000 hourly-wage workers of the Silicon Valley region are both underpaid and underemployed, according to a new report by the community-labor coalition Silicon Valley Rising (SVR). Among this group of workers, who represent California’s full demographic spectrum (in contrast to the blinding whiteness of its elite professional class), close to half are working part-time. The part-time portion of the labor force has over the past decade ballooned from 26 percent to 43 percent.

Part-timers on average earn less and work less. Over three-quarters of part-timers take home less than $15 an hour—a much greater proportion compared to full-time workers. But bad schedules are worse than low wages: SVR notes that generally, “Fully 41 percent of all hourly workers reported not knowing their work schedule more than seven days in advance.” This means never being able to plan or save for the future, or having to guess whether your food stamps or your rent budget will run out first this month. Only about a third of part-timers have paid vacation days, and just half receive retirement benefits.

Even when the minimum wage reaches $15 an hour in a few years, the part-time precariat will still struggle to make ends meet. A living wage in Silicon Valley is already about $15.70 per hour, but that’s only if you’re working 40 hours per week.

The official “part-time” count suggests these workers are idling for much of the day, but often part-timers work multiple part-time jobs simultaneously. Sometimes even full-time workers take on part-time work to survive.

Ivan Hernandez Rodriguez has a full-time job at a spa service, but earns just $360 a week. So after his day shift ends at 4:30, he works a part-time fast-food job until 1 am, for roughly an additional $150 a week.

He wishes he had more time to care for his 7-year-old daughter, who lives with his mother while he lives in a trailer, he says. But he only sees his daughter when he drops her off at school and then briefly in the afternoon before heading to his second gig. But by then, he adds, “she’s doing homework.…That’s our daily routine, so we don’t spend a lot of time together. I wish I could spend more time with my daughter [as she is] growing up right now.”

Rodriguez’s boss at his fast food job, he says, refuses to give him the additional hours he’s repeatedly asked for. Even with two jobs now, he laments, “There’s not enough money to pay for food, or being able to support [my] family here…or in Mexico.” With the heavy cost of living in the Bay Area, he adds, he “would’ve gone back to Mexico” if he had a choice, but his family obligations anchor him in the United States—while he sends some money to relatives at home, he stays to provide for the American daughter he barely glimpses between shifts.

Immigrants, women, and people of color dominate the “majority minority” part-time workforce, according to SVR’s report. SVR notes that “women of color and immigrant women make up close to half (45 percent) of the hourly part-time workforce in Silicon Valley, even though they are only 29 percent of the overall workforce,” with part-time work especially prevalent for Vietnamese and black women.

Ironically, the brutal working conditions suffered by part-timers are particularly prevalent in industries based on personal service and care work—accommodation and food services, education, healthcare and social assistance, and retail. These jobs are highly gendered and culturally devalued as “women’s work,” though the workers are often primary household wage-earners. More than 40 percent of local part-time workers are raising families.

One of the workers surveyed in the report, Alejandra Mejia, talked about struggling to support her three children with a fast food job that for years has made her work irregularly, near minimum wage:

I…am constantly asking, sometimes begging, for a full day’s work…so this seems especially unfair when new employees are hired to fill hours that I just requested. I’m right there, fully trained and ready to work! Being scheduled four hours a day, four days per week, and earning barely above minimum wage is just not enough to survive in Silicon Valley.

While policymakers debate whether women in the “new economy” can truly “have it all,” the women of the high-tech hub’s “invisible” underclass are still systematically denied Depression-era labor protections.

To stabilize the workers on the margins of Silicon Valley’s freewheeling economy, SVR is proposing the Opportunity to Work initiative, a measure to compel employers to offer full-time hours to their current part-timers before seeking to hire new part-time workers—thus encouraging local businesses to build full-time jobs rather than dilute their workforces with lower-paid part-timers. SVR and the labor advocacy group Working Partnerships USA hope to push the ballot measure onto the November ballot in San Jose. Along with the coalition’s efforts to organize unions among Silicon Valley workers, the initiative could help stabilize the workforce that serves the tech economy around the clock but never has a stable schedule.

Despite the talk of “diversity” in Silicon Valley, high-tech companies aren’t delivering economic inclusion to the Bay, and full-time, living-wage jobs along with strong labor organizing could, as SVR hopes, turn the region into “an ideal laboratory for a regional approach to creating fair workweeks.”

When more than 35,000 signatures were delivered last week to push Opportunity to Work onto the November ballot, they spoke to every parent’s silent plea as they spend their lives working for an unlivable wage: It’s not about having it all, it’s about all having a fair share.