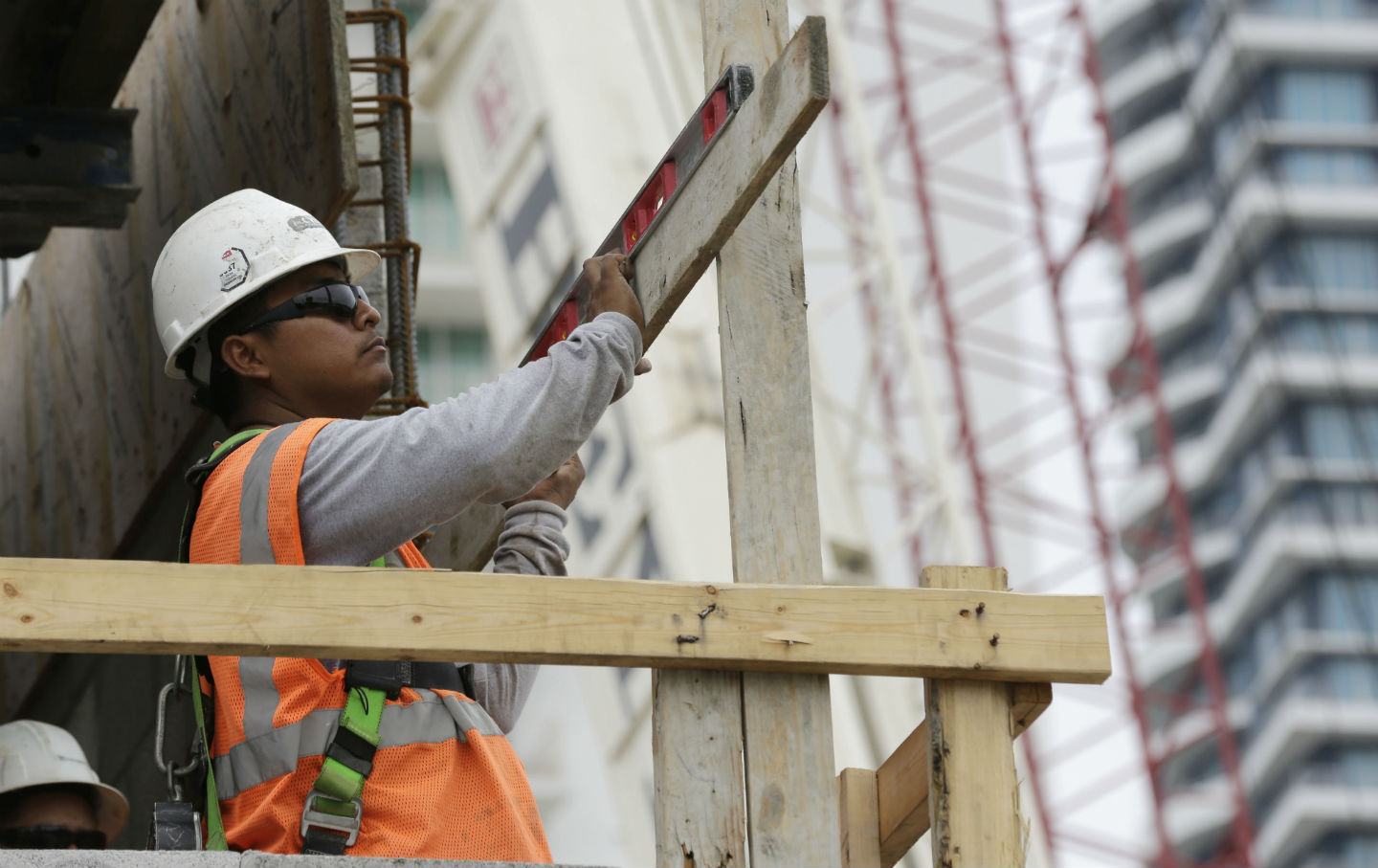 A construction worker works on the site of the SoMa at Brickell apartment building in downtown Miami. (AP Photo / Lynne Sladky)

The government just showed corporate America that they’re the boss, when they’d actually prefer not to be. In a landmark 3-2 decision issued last Thursday, the National Labor Relations Board expanded the definition of “joint employer” to include not just the boss that directly employs the worker but also the company that controls that workers’ labor conditions indirectly by contracting with the boss. The new definition could boost the nationwide low-wage workers’ movement known as the Fight for 15, by expanding the power of “outsourced” workers, who work for one company while formally employed through a third-party contractor, to organize and hold corporations accountable.

The case focused on the question of whether a recycling company, California-based Browning-Ferris Industries (BFI), should be considered a joint employer of 240 workers hired by a subcontractor, Leadpoint. The Board determined that BFI held significant enough control over Leadpoint workers’ employment and labor conditions to be considered a joint employer under the National Labor Relations Act.

The Teamsters had sought to organize a union election for Leadpoint workers—comprised of “part-time, and on-call sorters, screen cleaners, and housekeepers” on a short-term contract at a BFI recycling plant. The effort was thwarted by a regional labor-relations board office director and then appealed. The Teamsters argued that the narrow definition of joint employer allowed a company to act like a regular boss without upholding traditional employers’ responsibilities on fair pay and labor protections—which allows them to hold down labor costs and avoid “the basic legal obligation to recognize and bargain with the employees’ representative.”

In validating the Teamsters’ claims and allowing Leadpoint workers to move forward with unionization procedures, the NLRB overturned a precedent dating back to the early 1980s. The Board cited BFI’s power to determine key labor conditions for Leadpoint workers, including their daily duties, hiring, firing, training, and safety protections. In one instance described in the decision, a BFI operations manager claimed he did not directly exert control over firing decisions because he “merely requested” that certain employees be dismissed for misconduct but “did not order or direct” Leadpoint to execute the termination. (Of course, it didn’t matter to the worker which company issued the pink slip; he lost his job because BFI disapproved of his performance.)

The dissenting opinion rebutted that the redefinition of joint employer was arbitrary and “overbroad”: Would the household who commissioned a renovation job, for example, be as liable for the plumber’s labor conditions as the service provider that had dispatched him?

For now, Washington bureaucrats are adding fuel to one of the largest mobilizations ever of low-wage workers. The ruling doesn’t pertain explicitly to fast food-type franchise arrangements, but advocates hope it will galvanize the Fight for 15 movement’s demand for full union rights. Last year the NLRB’s General Counsel moved in this direction by labeling McDonald’s a joint employer in a pending case on alleged anti-union activities against fast-food worker activists. In addition, worker activists have filed several civil lawsuits charging McDonald’s as a joint employer over alleged labor violations in several cities. So far full-fledged unionization has remained out of reach, even as the movement has promoted minimum wage hikes and stirred low-wage worker organizing worldwide, particularly in non-union service industries.

The National Employment Law Project argued in an amicus brief that the BFI case represents a dangerous trend of companies outsourcing “labor intensive” aspectss of the production chain, and this atomization of the workforce “too often diminishes workers’ opportunity for organizing and collective bargaining and degrades working conditions.” Staffing and temp agencies now employ millions of workers and fuel mega-retailers like Amazon, whose warehouses are filled with poverty-wage contract workers who are routinely chewed up by harsh schedules and bone-crushing work routines, and are typically excluded from unemployment insurance once they cycle off the job.

There has been some unionization at individual franchise outlets—for example, UNITE HERE has unionized concession workers at Smithsonian Museums who are subcontractors of the federal government hired by the food-service vendor Compass. But while the joint employer definition can apply to Compass workers, the government’s direct labor relations with subcontractors generally fall outside the NLRB’s regulatory scope; and among privately run chain restaurants, Fight for 15 organizing, chiefly supported by SEIU, remains in legal flux. Meanwhile, organizers are seeking to align workers with individual franchise operators to jointly demand accountability from parent fast food brands.

But according to University of California–Irvine labor law professor Catherine Fisk, although the BFI ruling targeted general contractors that directly controlled subcontractor working conditions, the question of “Whether a franchisor is the joint employer of workers employed by a franchisee would depend on how much control the franchisor has over hours, scheduling, wages, and other conditions of employment.”

It‘s also unclear how the ruling could affect independent contractors, who are increasingly prevalent in sectors like trucking, computer programming, and media work—industries that labor activists have criticized for systematically misclassifying workers as “1099ers” to suppress wages and workplace organizing.

New York Communities for Change, which is helping lead New York City’s fast-food workers mobilization, says the decision could energize workplace-justice movements in the city’s exploding precarious and “gig economy” sectors: “We think this will have a huge impact in New York,” spokesperson Renata Pumarol says via e-mail. “The sub-contractor model is used in various industries, from hotels to construction.” The group hopes the redefinition of joint employer might at least indirectly help organizers challenge Silicon Valley heavyweights like Uber, which does an end-run around labor and taxi-industry regulations by claiming its legions of drivers are independent software users, not actual employees. Pumarol adds, “Unfortunately, the ruling does not cover companies who consider their workers independent contractors, but it does call for the NLRB to adapt to a changing economy. So I think we in the labor movement need to continue doing that, adapting to a changing economic model that continues to figure out ways on how to be less accountable to workers.”

The NLRB’s analysis may be tortured, but it helps unmask the contorted legal nature of the modern American workplace.