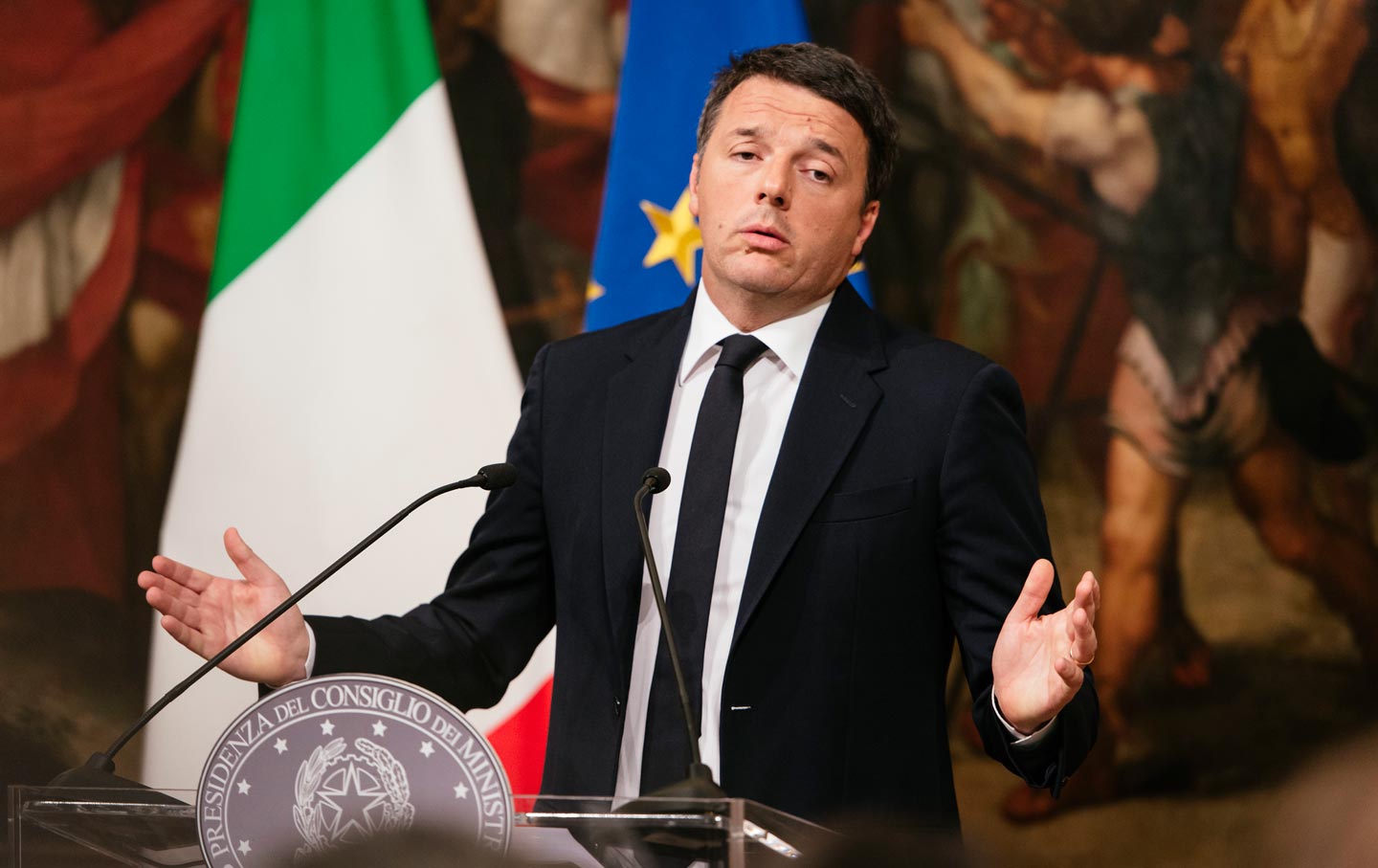 Rome—On Sunday, Italian Prime Minister Matteo Renzi was overwhelmingly defeated in a referendum to reform the constitution. (On Monday he handed in his resignation, which goes into effect once the budget has been passed.) The referendum, to reduce the size of the Senate and limit its powers, lost by a huge margin of 40.1 percent to 59.8, and a surprisingly robust 64 percent of those eligible went out to vote. Pre-election scare scenarios about a No result—that it would force Italy to leave the euro, as Wolfgang Münchau argued in the Financial Times; that it would severely damage Italian banks deep in bad debts, as The Wall Street Journal warned—seem to have been somewhat inflated. The day after, all was more or less well on the financial front.

But the vote, which many interpreted as a “How am I doing?” plebiscite on the prime minister himself, certainly did reveal that Italians are very unhappy with the status quo.

The victory of the No is unmistakable, but what does it mean? International commentators were quick to liken the Italian vote to the “populist” tides that powered Brexit and Donald Trump. And certainly, parties like the Five Star Movement (M5S) and the rank xenophobes of the Northern League (LN) feel they are the victors.

“The No was a means, the only one Italians have had in recent years, to say, ‘Enough…’” —Roberto Saviano

It’s worth remembering, though, that current polls don’t give the M5S more votes, about 30 percent, than the center-left Partito Democratico (PD). And the M5S has never made any electoral alliances. The first breakdowns of the referendum vote show that young people across Italy and southerners who bear the brunt of a long recession said No most decisively. The young writer and commentator Roberto Saviano, a southerner himself, said that “no project, no vision, no program won with the No. The No was a means, the only one Italians have had in recent years, to say, ‘Enough, stop trying to kid us, you’re not doing anything for us.’ It wasn’t a victory for the M5S, or the Lega Nord (come on!) or for Forza Italia, or for the minority of the PD always ready to find fault and then stand back and deny being dissident.”

For as Saviano notes, one of the great paradoxes of the No is that it also encompasses a part of the left—a left that in this critical moment is recklessly and foolishly divided. Much of the blame for that disunity lies with Renzi, a cocksure, scrappy 41-year-old whose personal style grates on seasoned progressives, and whose lackluster policies were shaped by European austerity rules (however much he tried to change them) as well as the need to compromise with the right because he lacked a clear majority in parliament. Even the late endorsement of the respected former prime minister and EU Commission president Romano Prodi didn’t save him. But some blame must also be assigned to the minority of dissidents within his own Partito Democratico and those in the left movement Sinistra Italiana (SI) who joined the 60 percent voting No on the referendum.

Among them was the veteran left daily Il Manifesto, sharply critical of Renzi, which ran a “NO Grazie” banner on its cover on voting day. “It’s the day of truth,” wrote editor in chief Norma Rangieri, correctly predicting that “the premier hopes for popular investiture as the big boss of national politics. But he risks a sound defeat.”

Speaking for the Sinistra Italiana (heir of Sinistra Ecologia Libertà, or SEL, and smaller left factions), Nicola Fratoianni, one of the group’s young leaders, took pains to distinguish pro-Renzi voters from the others. “People of the left who voted No” should join forces “to build radical change in this country,” he said. “The No and the Sì are not the same thing.… The left of the Sì wants democracy without people, without participation or social conflict. From the No, we must build the means to revolt.”

It is interesting, then, that one of SEL’s candidates who served as mayor of Milan, Giuliano Pisapia, refused to join the ranks of the No, dismissing left-wing alarm about the referendum measure with the remark, “Democracy is not in danger.” The reform of the Senate, reducing its size by a third and changing its powers to pass legislation to those of an advisory role, would not give the prime minister authoritarian powers, he said; “this fratricidal war of ours is nothing but a huge gift to the right.”

But another SEL colleague who has held government office didn’t agree. Nichi Vendola, who this year became a father with his longtime partner Ed Testa, maintains a blog now that he is no longer governor of Puglia. Before the referendum, he wrote: “Buried beneath the political chatter lies a burning social problem, the combination of a middle class growing poorer and the precarious nature of the younger generation’s lives (not to mention their jobs).” It is a threat to Italian democracy that is not being addressed by the government, he said. Not incidentally, Vendola reflects a southern perspective.

Another southerner, the mayor of Naples Luigi De Magistris, an independent, writing on Facebook after the vote, went straight for the jugular. The referendum result was “a great democratic victory,” he said, calling Renzi “an authoritarian stalker who has been repelled.” His extremism was a sample of the bile expressed on social media in the weeks before the vote, particularly against the prime minister.

The rhetoric on the web was explosive, as if the deepest social strife lay between the center-left and the further left.

The rhetoric on the Web was explosive, as if the deepest social strife in Italy lay between the center-left and the further left. Old friends and family members, divided by their support for the Sì or the No, insulted one another and broke off relations. Ordinary Italians, who love fiery political debates, became strangely reluctant to air their views on the subject. The left seemed to have been infected by the mad-dog rhetoric of Beppe Grillo of the M5S, who was meanwhile urging his people to “vote with your guts, not your heads.”

Renzi and his government were “serial killers of our children” howled Grillo. His popular blog, it emerged last month, was one of the key sites purveying and multiplying fake news in Italy, including false referendum “scandals.”

But potent anger lurked inside the PD too, where Renzi’s staunchest critics have been his former rival for party secretary, Pierluigi Bersani, and the party veteran and former prime minister Massimo D’Alema. D’Alema is just 67, but he has been active in politics so long and held so many key party and government positions that he is considered something of a Methuselah. On Twitter Sunday night, the young novelist Claudia Durastanti mused: “Post truth or post life? Watching D’Alema brings cryogenics to mind.”

As prime minister in 1998-2000, D’Alema was the first former Communist ever to lead an Italian government. In 1997, as an MP and chairman of a bicameral committee on constitutional reform—tasked with examining a legislative process that some felt hampered governance because the constitution so scrupulously limited executive power—D’Alema had devoted more than 12 months of his time to forging a broad agreement on reforms. He was then dramatically out-maneuvered by Silvio Berlusconi, who switched position overnight, upturning the negotiation tables and ending any further real attempt at such reform before Renzi came on the scene.

In a party dominated by elders like D’Alema, Renzi has been one of the few younger politicians to challenge the old Communist Party elite and the only one to grab the leadership. He did so by attacking the old guard in no uncertain terms. It was time to “send them to the junkyard,” he said. His iconoclastic approach and brash language, reminiscent in some ways of Berlusconi’s offhand and unceremonious style, evoked visceral dislike among party regulars but appealed to the young. Even among those who don’t like him, some on the left have come to appreciate that his strident style has been shaped by the unnatural (someone called it “feudal”) grip on power of D’Alema and his peers.

“The roars of victory, like the victimistic lamentations, leave us just where we were before. In the muck.” —Helena Janeczek

Was all this Sturm und Drang inside the left productive? As novelist and critic Helena Janeczek, again on Facebook, said of her friends of the Sì and the No: “The roars of victory, like the victimistic lamentations, leave us just where we were before. In the muck, that is.”

In a mess, Beppe Grillo and his M5S, along with the equally demagogic but even more reactionary Matteo Salvini of the Lega Nord, are crowing and calling for immediate elections. Renzi, too, wants to go to the polls soon, emboldened by his 40 percent polling. But before that can happen, Parliament must approve a new electoral law. The one passed this year in the Chamber of Deputies, which awards a majority premium to the winning party, might go to reward the M5S, should Grillo edge out the PD. The much smaller Lega Nord would have to form a coalition with other right-wing forces to govern. Both parties are hostile to the European Union. Gone, with Matteo Renzi, is the European leader who has arguably done the most to try to push the EU away from austerity.

“To me, it looks (as in post-Brexit Britain) that nobody wants to govern Italy. It’s too much of a hot potato. The post-referendum path is not as smooth as it appears to some,” said the young Somali-Italian writer and activist Igiaba Scego.

It was an observation at least as pertinent as that of any of the professional political analysts. Beyond Italy’s political squabbling lies a continent in deep economic trouble, suffering the longest recession of modern times, stymied by an implacable ideology of austerity, confronting a wave of angry, proto-fascist, anti-establishment sentiment.

A situation that only the broadest left can hope to counter.