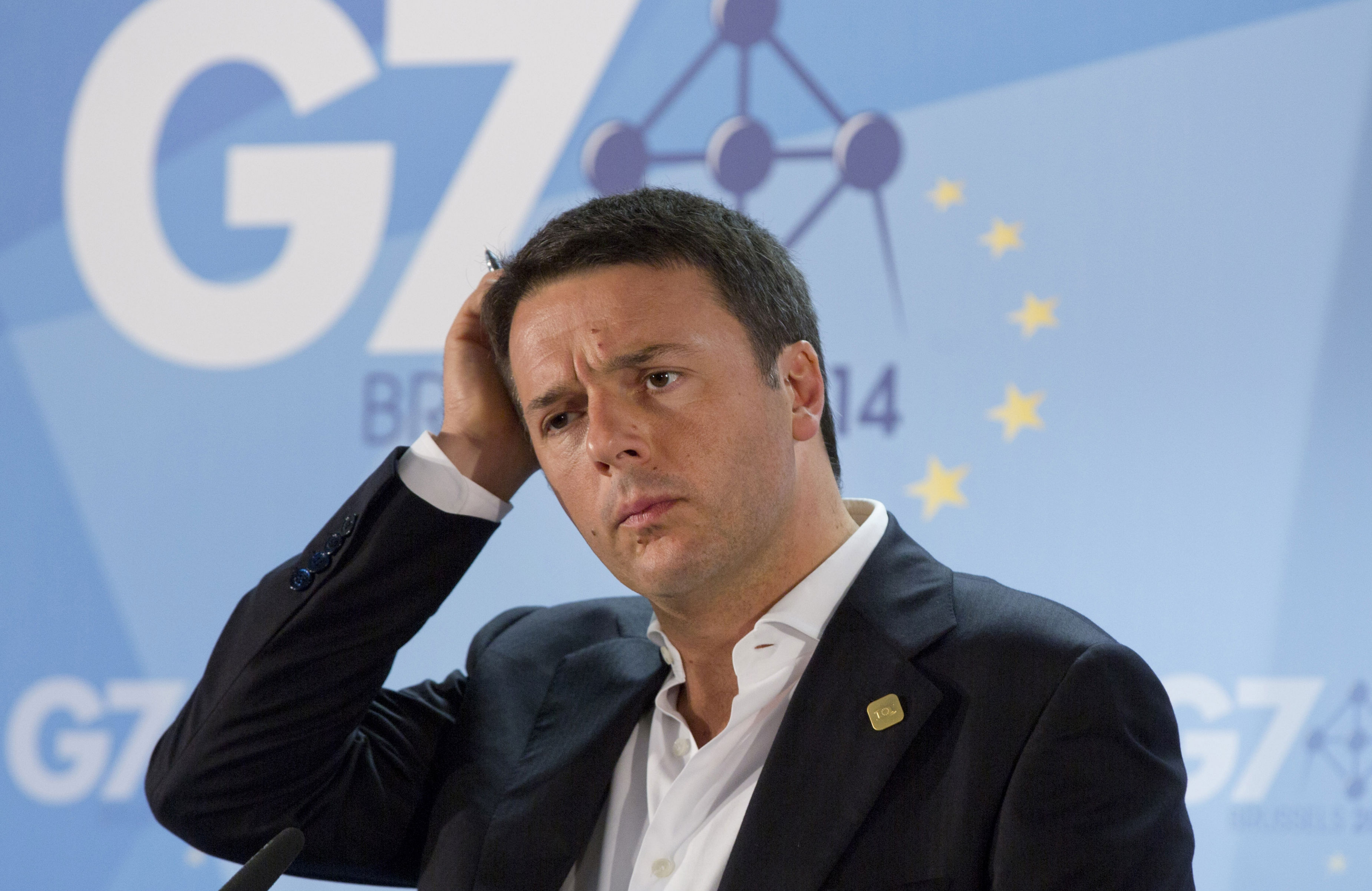 Rome—What if the real villains in Europe today were not the far right, xenophobic and anti-EU parties, the UKIP, the Front National, the Lega Nord, Golden Dawn and the German neo-Nazis who captured so many frantic headlines after the recent European parliamentary elections? What if instead the most dangerous extremists were those tight-lipped, conservative burghers of the EU liberal and popular coalitions, the true believers in austerity, the water-carriers for neoliberalism’s holy war, the ones determined to destroy the European economy to save it?

In such a light, the Old World will need a very determined left if the destructive policies of the outgoing EU commission, so long dominated by conservative German opinion, are to change. At the moment, Italy’s Matteo Renzi, whose Partito Democratico (PD) got 41 percent of the vote in a three-way race in May’s EU elections, is probably the politically strongest and most energetic voice for change within the mainstream, governing parties in Europe (now that, post-elections, the once-majority Popular Party and its junior ally the Liberals must share power with the Socialists in the EU parliament and commission.)

But how left wing is Renzi, really? Among Italy’s old left—in the PD and in the smaller independent left groups like Sinistra Ecologia Libertà (SEL)—Renzi is sometimes cast as a closet Christian Democrat, an able politician, somewhat autocratic, somewhat opportunistic, not really a progressive. The left-wing paper Il Manifesto recently defined him as a “populist technocrat,” meaning something like a neoliberal with demagogic crowd skills. Beppe Grillo of the anti-government, anti-Euro Movimento 5 Stelle (M5S) lumps Renzi with the rest of the discredited, corrupt political class known as la casta; during an unforgettable meeting between the two, streamed live for the benefit of M5S voters, Grillo bellowed, “You are not credible! You are not credible!” across the table at Renzi for the better part of an hour. The only Italians who admit to admiring Renzi outright are his political enemies in the Berlusconi camp, perhaps hoping that flattery will ease their rapidly collapsing political fortunes. Silvio Berlusconi himself, meeting Renzi in a consultation much criticized inside the PD, is supposed to have said, “But Renzi, how can someone as clever as you stand the Communists?”

The thirty-nine-year-old Renzi was elected PD party secretary in primaries in December and named prime minister in February (replacing party colleague Enrico Letta and his government with a swiftly assembled new cabinet based on the same political forces). He does not hail from Italy’s traditional left, the former Italian Communist Party (PCI), backbone of the PD. Although he grew up in the stoutly Communist region of Tuscany, Renzi’s family was Catholic, his father a Christian Democrat, and he was an active boy scout (a Catholic scout, for in Italy the Catholic Church superintends most of the scouting movement). Elected mayor of Florence with the PD in 2009, Renzi soon made a name nationally by attacking the old guard of the party in no uncertain terms. In speech after speech he urged they be rottamati—scrapped, sent to the junk yard. His verbal style was disconcertingly direct and unadorned; it reminded some of Berlusconi’s speech, and like Berlusconi’s it was a direct attack on the old left’s more elegant and principled (some would say windy and abstract) rhetorical style.

But Renzi’s real moment arrived in the spring of 2013 after the frankly demagogic, plague-on-all-your-houses figure of Grillo and his all new M5S stunned Italy when it got more than a quarter of the vote in national elections, not much less than the PD. Beside the histrionic, foul-mouthed ex-comedian Grillo, Renzi suddenly looked like a confident, energetic boy scout who just might save a tired party. He was twenty years younger than pudgy, gray-haired Grillo, and his junk-the-bums message appealed to young Grillo voters bitter at having been abandoned by a gerontocratic political system and labor market. Renzi was also perfectly at home with social media, and willing to undertake press stunts the left shuns, like appearing on the cover of the Italian Vanity Fair in the act of tying his necktie, a come-hither grin on his face. Not for nothing was his first job in the field of marketing.

And yet, what kind of a “closet Christian Democrat” was this premier whose first decision ahead of the European elections was to enroll the PD in the EU Socialist coalition, when a noisy band of Catholics in the party had long been urging fusion with the Populars? And if Renzi was that veteran of la casta the M5S said he was, how had he so effortlessly formed a government in which eight of the sixteen ministers were women, achieving a level of gender parity that far exceeded the undeniably positive result of 2013: an Italian parliament with 30 percent women?

Because the 2013 national elections had yielded an essentially hung parliament (PD, 30 percent; Berlusconi-Forza Italia, 29 percent; M5S, 26 percent), the government’s mission was meant to be limited: to agree upon a new voting law and to redesign the role of the Senate to streamline the legislative process. Although those reforms still risk foundering, Renzi has proved quite clever, first locking Berlusconi into an agreement, then parrying the M5S when at the eleventh hour they pleaded to come to the bargaining table after loudly refusing to negotiate with la casta for more than a year.

While engaged in these tricky negotiations, Renzi has shrewdly done several other things. He quickly gave some relief to Italy’s lowest earners with an immediate tax cut that amounts to almost 1,000 euros a year, not nothing for people whose annual incomes come to less than 26,000 euros before taxes. He has decisively cut salaries for state-sector managers and is looking at proposals for a wealth tax—all redistributive measures. He introduced a bill to legalize same-sex civil unions (a tormented issue in Catholic Italy) and promised it will be discussed in September. None of these matters, however, provoke the really bitter battles that other proposed reforms (of the public sector, of the judicial system) are bound to unleash. Many say the young prime minister’s accomplishments are merely symbolic. Yet even some of Renzi’s opponents to the left acknowledge that a country locked in stasis for twenty years, as Italy has been under Berlusconi, finds any forward motion cheering.

And indeed, current polls show Renzi is very popular, as did the EU elections in late May, when the PD got 41 percent, the M5S, 21 percent, and Forza Italia, just 16 percent. (By way of comparison, the old PCI’s biggest return at the polls ever was 34 percent, in 1976.) To the left of the PD was the Lista Tsipras for Another Europe, a progressive anti-austerity group including SEL that got just over 4 percent, enough to send representatives to the EU parliament. But the Lista Tsipras has been troubled by tensions between the group of intellectuals who founded it and the left parties that ran under its umbrella. In recent weeks the SEL has begun to split, and Il Manifesto recently urged once-strong leader Nichi Vendola to step aside.

In early July, Renzi made his bid to lead the anti-austerity forces in Europe when he addressed the Strasbourg parliament as Italy began its six-month presidency of the union (an almost wholly symbolic role). It was in certain ways a rousing speech, delivered without a written script and enlivened with striking images, not the usual boilerplate delivered on such occasions. He began by asking what the Euro MPs would see were they to pick up their smartphones and take a selfie in the chamber. “Boredom,” he said, boredom and fatigue. This was the lead-in to one of Renzi’s favorite tropes, that a tired, ingrained, blocked political system must yield to what he called the “Telemachus generation”—young Europeans whose lives are being frittered away while they wait for the wandering Ulysses generation of the parents to finish the voyage and pass the baton. If Renzi has made something of a cult of his own youth, there’s no denying that the issue is real. Prolonged economic depression has left more than 22 percent of Europeans aged 15-24 not only unemployed but seemingly without long-term prospects.

Austerity, Renzi said, must be tempered with “flexibility”; investments to build employment capacity, for example, cannot be counted as public spending in the same way as the debt service. He was referring to a vague clause in a June 27 agreement he had worked out with German Chancellor Angela Merkel that promised more flexibility in applying the Stability Pact, the agreement that sharply limits national government debt and deficits (and which in recent years has stifled public spending to counter recession).

The left opposition was not impressed.

Renzi has challenged none of the economic rules “that have provoked a loss of confidence in European institutions without precedence in the Union’s history,” wrote Barbara Spinelli, Euro-MP and one of the founders of the Lista Tsipras, in Il Manifesto. Until he attacks the “neoliberal creed,” the “so-called structural reforms” that produce only low-paid, precarious jobs, and the “market consensus that has replaced the popular vote,” the Italian prime minister’s words are hollow, she said.

They were not the only critics, however: the leader of the EU Popular Party, Manfred Weber, immediately attacked Renzi from the Parliament floor, and austerity hardliners Jens Weidmann, Bundesbank president, and Wolfgang Schäuble, German finance minister, spoke up to dismiss any talk of flexibility. Those comments, which came as the Bundestag approved a historic bill to impose a minimum wage in Germany, were perhaps more generic neoliberal cries of alarm than specific replies to Italy. On July 15, however, when Jean-Claude Juncker was elected president of the EU commission, he immediately announced a 300 billion Euro program to promote growth and create jobs. He also acknowledged that immigration was a Europe-wide problem, not the sole responsibility of countries like Italy with permeable sea borders.

So it seems Renzi’s influence may count, but how left wing is he, really? Let’s just say he’s all-politician, quick on his feet and clever at outwitting his Italian opponents, a man who plays his ideals close to his chest. It may be that he will prove a useful ally to Merkel, who perhaps would like to wrest the Popular Party away from the economic hardliners. But if the Italian prime minister thinks he will get important concessions at the European bargaining table, that is pure hubris. Where he may have influence is in the public eye: persuading European voters (as he has persuaded Italians) that with youth, energy and tenacity, the stifling rules of Europe can be changed. There will be no clarifying showdown over neoliberal ideas and policy, but perhaps there will be a slow, gradual process of change.

Postscript: In June Beppe Grillo’s M5S joined forces with England’s xenophobic UKIP and several other small reactionary parties to form the “Eurosceptic” Freedom and Direct Democracy group in the Strasbourg parliament. That unsavory alliance, and the Italian party’s poor showing in the EU elections, have created new tensions inside the M5S. Will Grillo even survive as party boss?

Meanwhile, Silvio Berlusconi, now serving time for tax fraud, may find his punishment (community service with Alzheimer’s patients) considerably harsher at the end of the week if his appeal in a second trial, for sex with a minor, fails. Although his grip on Forza Italia is failing, Berlusconi still clings to the political game.