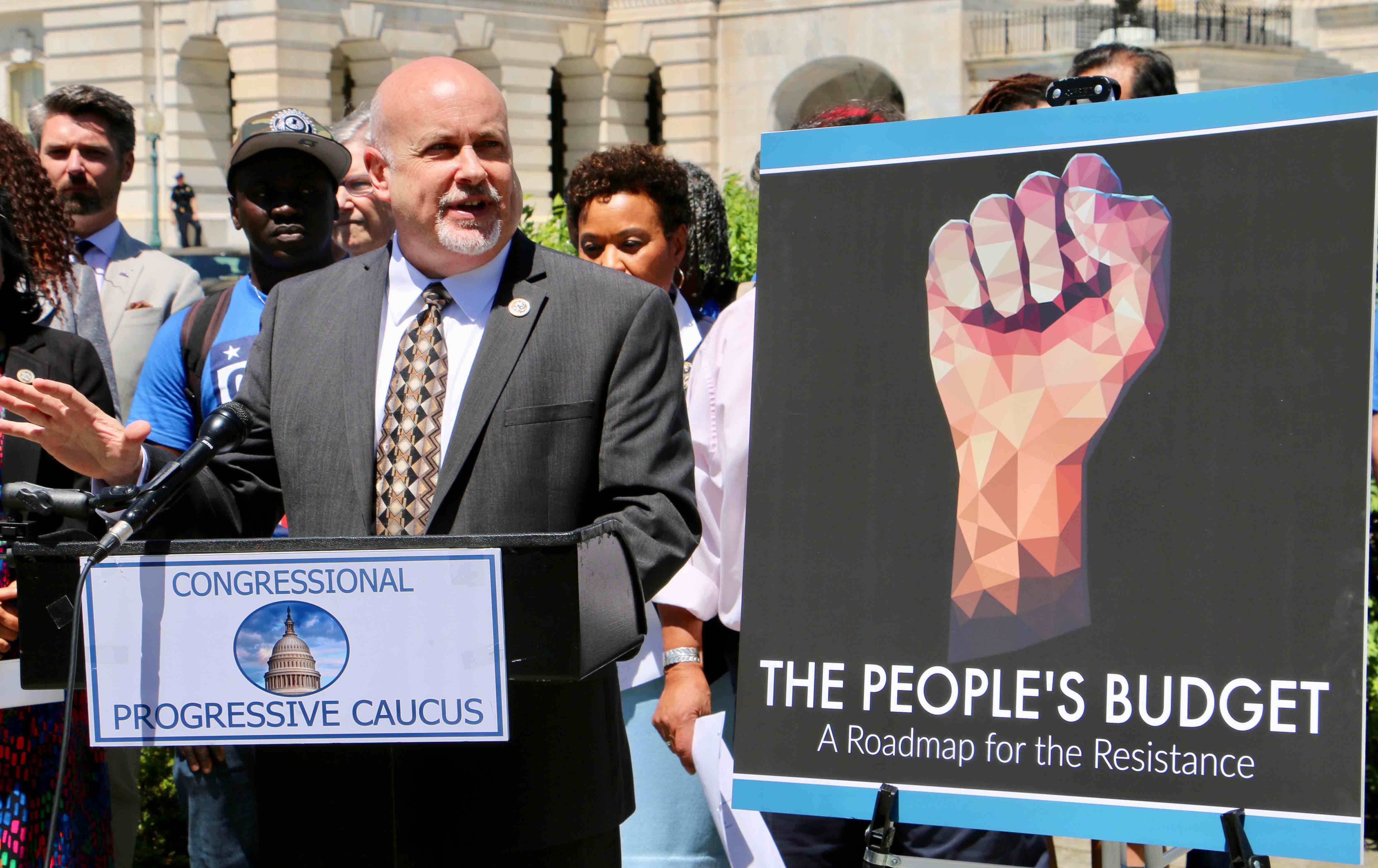 Representative Mark Pocan of Wisconsin at a press conference for the “People’s Budget” on Capitol Hill on Tuesday, May 2, 2017. (Photo via Congressional Progressive Caucus)

The Congressional Progressive Caucus released “The People’s Budget” this week, which it dubs a “roadmap for the resistance.” Maybe the mere mention of a federal budget plan makes your eyes glaze over, but the “People’s Budget” is a dramatic document.1

It presents a compelling alternative to Donald Trump’s “skinny budget.” Unlike Trump’s fanciful promises, it offers a sensible path out of the hole that we are in. Its values and priorities reflect those of the majority of Americans. The Progressive Caucus frames its budget around the central challenge of our time: how to make this economy work for working people, and redress the savage inequality that is undermining our democracy. It offers a strategy to get there, and a budget framed to support that strategy.2

Not surprisingly, this makes it an outlier in the beltway debate. 3

With wages stagnant and worker participation in the economy still depressed, moving to full employment should be Washington’s first priority. That requires shedding the straightjacket of fiscal austerity that has slowed growth, hurt unemployment, and added to deficits. 4

The “People’s Budget” calls for public investment, sustained over the long run by insuring that corporations and the wealthy pay their fair share of taxes. The budget calls for an immediate boost of domestic spending over the next two years for investments in teachers and K–12 schools, aid to states to hire first responders, expanding Medicaid, public works jobs programs targeted at distressed communities, and more. 5

Public investments are far more effective, dollar-for-dollar, at boosting the economy and putting people to work than the Trump-favored top-end tax cuts. The federal investments laid out in the “People’s Budget” addressed urgent needs, as opposed to handing more money to the already wealthy—which adds to our obscene and corrosive inequality.6

Over the longer term, the progressive budget blueprint would sustain a full employment economy by rebuilding America. It calls for spending $2 trillion in rebuilding our public infrastructure—from water systems to roads and mass transit—over 20 years. This comes close to meeting the sums the American Society of Civil Engineers argues are needed simply to bring our infrastructure up to sound standards. (We still have seen no glimmer of Trump’s oft-promised infrastructure program.) 7

The Progressive Caucus would return domestic discretionary spending—what government spends on everything outside of defense, social insurance, and interest on the national debt—to its average historical levels: 3.5 percent of GDP. Simply returning to the norm requires $2 trillion dollars over 10 years. Trump’s budget, in contrast, calls for savage cuts of 20 percent in domestic spending over the next 18 months. 8

This spending commitment is vitally important, and easy to underestimate. Conservative legislatures have been starving basic government functions for decades. The “People’s Budget” would provide increased funds for impoverished schools, vital investments in affordable housing, and job training. It would boost the United States in the global green industrial revolution. Public parks would get the care they need. Toxic waste sites and poisonous water systems would be cleaned up faster. Students would get substantial debt relief and college affordability. 9

Public financing of campaigns and funding for voter protection would help strengthen our democracy—both things are included in the “People’s Budget.” Overall, Americans would get a government able to function more efficiently, from administering Social Security to enforcing safety rules at work. 10

The “People’s Budget” protects protects Social Security, Medicare, and Medicaid. It provides a new commitment for affordable child care for all, at the cost of nearly $1 trillion over 10 years. It adopts Obama’s preschool-for-all proposal, and Representative Jan Schakowsky’s bill to end family homelessness. It would expand Earned Income Tax Credits to cover low-wage workers who are childless. Trump, in contrast, supports a health-care plan that would have cut billions out of Medicaid and deprived millions of health care to pay for tax breaks for the rich. 11

The CPC seeks to pare government spending in areas of obvious excess. It slows the growth of the military budget, the largest source of waste, fraud, and abuse in the federal government. After providing funds for one year to facilitate withdrawal from Afghanistan, it ends the Pentagon’s off-budget slush fund for “Overseas Contingency Operations.” It reduces health care costs by taking on the drug companies, empowering Medicare to negotiate bulk discounts, and creating a public option in Obamacare. 12

Trump, meanwhile, wants to fatten the Pentagon with even more money while escalating military involvement in Afghanistan and elsewhere in the Middle East. He also quickly abandoned his pledge to crack down on the drug companies.13

The “People’s Budget” accomplishes all this while still lowering the projected US debt and deficit levels, by making corporations and the wealthy pay their fair share. 14

Trump wants to lower tax rates on the rich and continue to tax the income of investors at lower rates than ordinary income.16

The Progressive Caucus plan would close egregious loopholes, end deferral of taxes on income corporations report as earned abroad, cap the value of itemized deductions, and keep the Alternative Minimum Tax that Trump wants to eliminate. The “People’s Budget” would end the home-mortgage deduction for yachts and vacation homes. 17

It taxes corporations for CEO excesses, curbs the deduction on stock options and bonus pay, eliminates deductions for corporate jets, and limits the meals and travel perks. It ends the billions that go to Big Oil in fossil-fuel subsidies.18

Trump’s tax plan didn’t reveal what corporate loopholes he would close, but did suggest expanding the incentive to offshore jobs by making all income reported as earned abroad free of US taxes. That is a full employment program for accountants.19

The Progressive Caucus proposes taxing “bads,” that is, activities we want to discourage: a financial transaction tax to curb the destabilizing financial casino; a tax on big banks—“systematically important financial institutions”—to help even the playing field; a tax on carbon emissions that sends revenues to low- and moderate-wage workers. It at least tempers the accumulation of dynastic wealth, adopting Bernie Sanders’s “Responsible Estate Tax” rate, which exempts estates up to $3.5 million, and then imposes a progressive rate on estates up to $50 million, with a surcharge on those over $500 million. Trump wants to eliminate the estate tax and the Alternative Minimum Tax.20

In this conservative era, federal policy has moved so far to the right that the spending and taxes in the “People’s Budget” seem fanciful. Yet this is a remarkably modest proposal. The plan champions Medicare for All, but chooses only to support state transitions to single-payer plans in the budget. Most Progressive Caucus members want expanded Social Security benefits, but decided that Social Security is better addressed separately from the budget mosh pit. They slow the growth of our outlandish military budget (nearly 40 percent of the world’s military spending), but chose not to offer a plan to restructure our military and cut it to sensible levels. 21

The “People’s Budget” turns the priorities of most Americans into budget figures. If adopted, it would move the country toward full employment and less extreme inequality, even as it reduced projected deficits and debt. It would strengthen the shared security that families can count on. It would rebuild vital public capacity and infrastructure. 22

Last year’s version of the “People’s Budget” didn’t get a vote, since Republicans never brought their budget to the floor. The year before, it did gain support from a (slim) majority of House Democrats. This year, over 60 groups are driving a large national push to see it gain 100 votes in the House. (You can join the petition drive here.)23

The People’s Budget provides a basic road map for where we have to go. It outlines what we are for, not simply what we are against. Prepared in conjunction with the Economic Policy Institute, it is bolstered by supporting charts and documents, as well as the EPI’s detailed economic analysis—which by comparison makes a mockery of the shoddy “skinny budget” and one-page tax “plan” that the Trump administration released. 24

The Progressive Caucus has provided a stark contrast to the assumptions, magical thinking, and priorities of the right. It demonstrates that there is an alternative that adds up. Under the leadership of co-chairs Keith Ellison and Raul Grijalva and vice chair Mark Pocan, the Progressive Caucus is gaining in members and influence. Against Trump, its members will not only help spearhead the resistance, they will help define the reconstruction. And the People’s Budget provides a good start.25