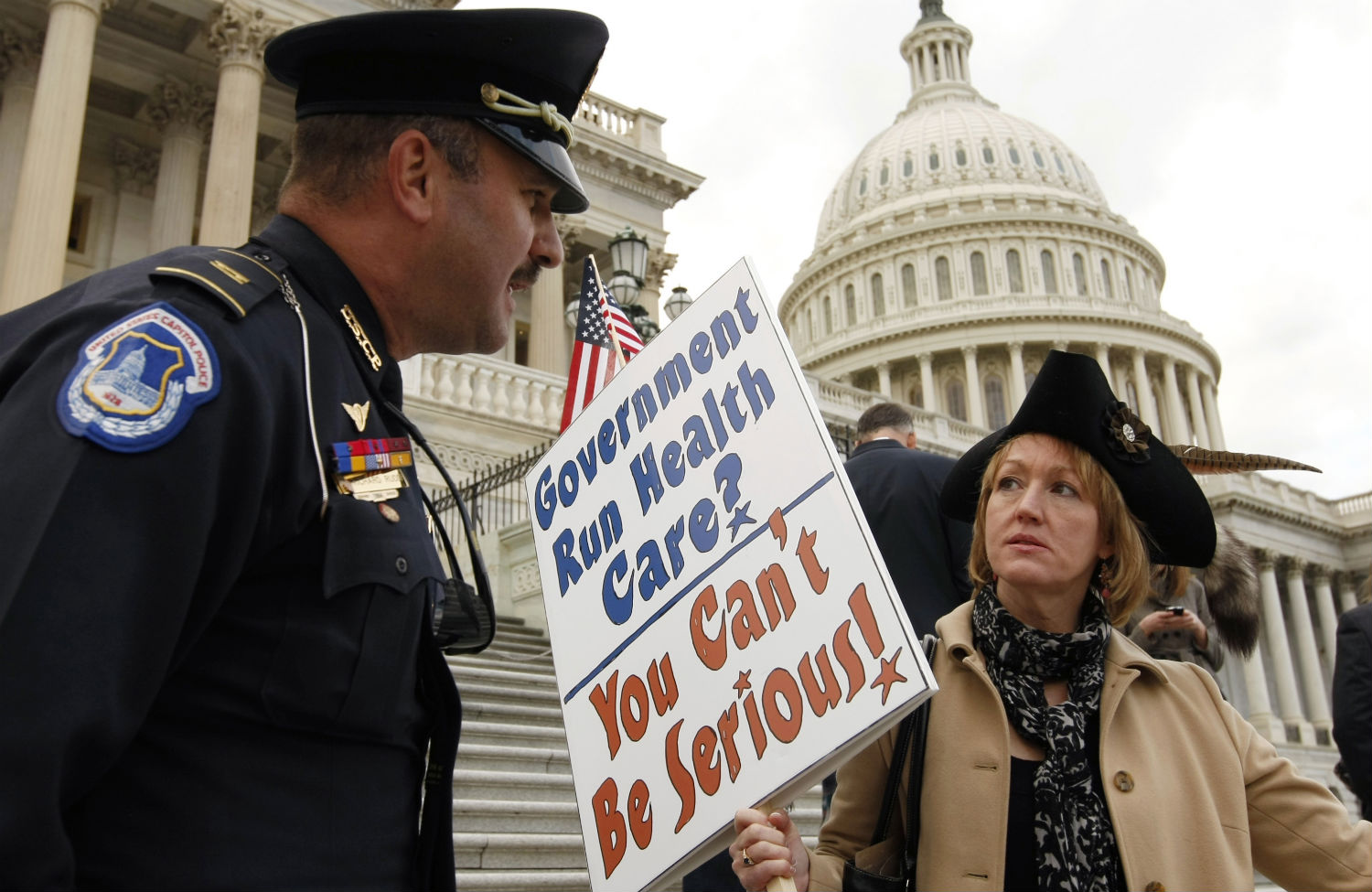 A Tea Party demonstrator speaks to a policeman during a rally against the Affordable Care Act at the Capitol building. (Reuters/Kevin Lamarque)

It’s one of the most frequent questions people ask me about conservatives: “When they say X, do they really mean it?” Does, for example, Rick Santorum really mean it when he says about Nelson Mandela, as he did in a recent interview with Bill O’Reilly on Fox News, “He was fighting against some great injustice, and I would make the argument that we have a great injustice going on right now in this country with an ever-increasing size of government that is taking over and increasing people’s lives—and Obamacare is front and center in that.” And I have to answer that largely, as astonishing as it may seem, they do.

Never mind that the size of government is not “ever-increasing” (see here). Empirical debunking cannot reach the deepest fear of the reactionary mind, which is that the state—that devouring leviathan—will soon swallow up all traces of human volition and dignity. The conclusion is based on conservative moral convictions that reason can’t shake.

Recently the outstanding political reporter Brian Beutler, now writing for Salon, wrote in a piece headlined “Right-Wing Extremists Face New Moral Conundrum” that as long as Healthcare.gov isn't working like it is supposed to, Republicans could “ignore the moral imperative they face” to help their constituents get healthcare. “A working site that can service a million people a day destroys that excuse. Some conservative groups have been craven and reckless enough to actively discourage people from enrolling in Affordable Care Act coverage.” I guarantee, though, that few or no conservative politicians are losing sleep over this. Instead, they judge themselves heroes. Waylaying their constituents’ ability to avail themselves of federally subsidized healthcare is not a “moral conundrum” for them. It is a deeply moral project. The immorality, as they see it, would be to allow people to become dependent on the state for their health.

I’ve been repeating myself, but clarity is very important here: know thine enemy. (OK, we’re liberals; we don’t have enemies. Know thine adversary.) Theirs is a morality entirely incommensurate with liberalism—but it is a morality.

One of its theorists was the Christian reconstructionist theologian Dr. Rousas J. Rushdoony. He wrote in his 1972 book The Messianic Character of American Education that since “the nuclear family is the basic unit of God’s covenant,” undermining the vaulting ambitions of the secular state was a godly duty. But you don’t have to be a Christian Reconstructionist or advocate, as Rushdoony did and his followers do, returning to biblical punishments like stoning to share the same intuition. Even mild-mannered Gerald Ford, usually not judged a frothing right-winger, used to love the nostrum “A government big enough to give everything to you is big enough to take everything away.”

Relying on government is slavery: it’s a consistent trope within modern conservatism. We see it today from the extremist doctors who refuse to “submit” to being reimbursed for their services by Medicaid, or even the government-tainted private insurance companies. They’re organized in a 4,000-member group called the American Association of Physicians and Surgeons. Senator Rand Paul is a member; its website features him asserting that if you believe in a “right to health care,” then “you believe in slavery.” And what kind of moral person believes in slavery?

Then there’s the old saw that the deal the Democrats supposedly offer African-Americans—you vote for us; we give you free stuff—returns them to “slavery.” The first use of that metaphor I’ve identified was by Ronald Reagan in 1968. A black reporter asked him why there were so few blacks at Republican events. The California governor politely but forcefully replied that it wasn’t Republicans who were racist but the supposedly liberal Democrats who “had betrayed them…. The Negro has has delivered himself to those who have no other intention than to create a federal plantation and ignore him.” The New York Times reported, “Reagan handled the situation so smoothly that some of the newsmen aboard his chartered 727 suggested, half-seriously, that the Reagan organization had set up the incident.”

What does this insight—that conservatives are immune to charges of “immorality” when it comes to denying citizens government services because they believe “hooking” people on government services is profoundly immoral—mean in terms of practical politics? For one thing, that Democrats will never get political credit from conservatives for downsizing or “reinventing” government. Just to speak of the state as something other than the source of all evil is enough to send chills down right-wing spines. Had JFK lived to give the speech he was scheduled to give at the Dallas Trade Mart on November 22, 1963, he intended to set conservatives straight: “At a time when the national debt is steadily being reduced in terms of its burden on our economy, they see that debt as the greatest single threat to our security. At a time when we are steadily reducing the number of Federal employees serving every thousand citizens, they fear those supposed hordes of civil servants far more than the actual hordes of opposing armies.” But I don’t think Texans were going to turn in their John Birch Society membership cards, the scales falling from their eyes, when they learned of the facts.

And given the rank anti-empirical irrationalism that undergirds such convictions, it’s not like the White House can now avoid brickbats by somehow “submerging” progressive action by the state. Which, unfortunately, is what the Obama Administration has habitually tried to do. "Design of the Affordable Care Act,” as The Washington Post reported in a major investigation last month, “was hampered by the White House’s political sensitivity to Republican hatred of the law—sensitivity so intense that the president’s aides ordered that some work be slowed down or remain secret for fear of feeding the opposition. Inside the Department of Health and Human Services’ Centers for Medicare and Medicaid, the main agency responsible for the exchanges, there was no single administrator whose full-time job was to manage the project.”

But it’s not like their overabundance of caution earned a single Republican vote in Congress, or kept Republican attorney generals from suing to end its implementation, or four conservative Supreme Court justices from seeking to strike down the entire act (and a fifth, John Roberts, from ruling on its legality in away that set a precedent that might make future major government initiatives harder to constitutionally defend). It couldn’t have. Conservatives’ deepest moral convictions determined their reaction in advance. Anything liberals do to use the government to help people will be judged by genuine conservatives as an abomination; always have, always will. But genuine conservatives are in the American minority, as I wrote here last month. Isn’t it better to simply sin boldly and let our conservatives devils have the hindmost? Use the state to make people’s lives better. Do it without apology. That’s our moral imperative that should be beyond compromise.

In Part Five of this series, Rick Perlstein discusses conservatives' complicated relationship to the truth.