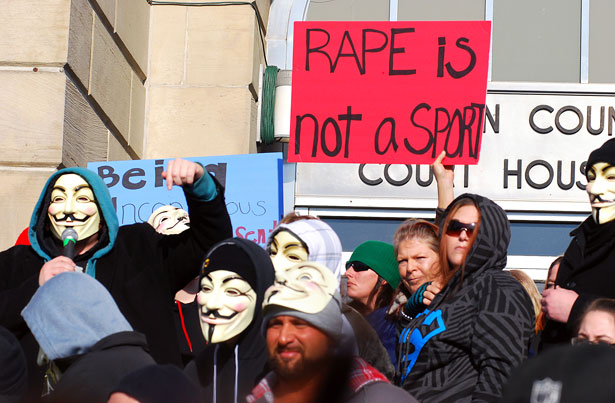 A friend pointed me to a letter to the editor published in the Badger Herald, an independent newspaper published at the University of Wisconsin , widely tweeted with such comments as “Motherfucker, what the fuck” and “how do people like this actually exist?” It argues that rape culture is, in the writer’s words, “non-existent.” I provide the link for documentation purposes only; you should most decidedly not click on it, especially if you are a woman vulnerable to rape-trauma triggers, or a woman, or, actually, if you are a human being. The letter, from a junior majoring in political science, goes on to say that the term “rape culture” merely “aggressively paints men as dangerous and as the root of evil,” and complains “women feel the need to exploit anything that may be rape for publicity.”

I’ll say no more about this “argument.” I bring it up to make a broader point about right-wing rhetoric. It is this: Have you ever noticed how conservatives who say the most controversial things imaginable consistently frame such utterances as self-evident, as simple “truth,” explaining with unshakable confidence that anyone who disagrees with them… no, scratch that. Start over:

Have you ever noticed how conservatives who say the most controversial things imaginable think no one actually disagrees with them?

They will admit that, yes, people might claim to disagree. But they will explain, if pressed, that those who do so are lying, or nuts, or utter the non-truths they utter out of a totalitarian will to power, or are poor benighted folks cowed or confused by those aforementioned totalitarians. (Which, of course, makes the person “finally” telling “the truth” a hero of bottomless courage.) Or the people who disagree are simply stupid as a tree stump. This is why “agree to disagree” is not a acceptable trope in the conservative lexicon. A genuine right-winger will be so lacking in intellectual imagination—in cognitive empathy—that imagining how anyone could sincerely reason differently from them is virtually impossible.

Here’s what that kid from Wisconsin, whom I won’t even dignify with more publicity by typing his name, writes of what he’s about to argue: “I know that people are out there on the fringe of reality who are going to criticize me for what I’m about to explain—but somebody has to explain this.” He also says, “if you put a spotlight on rape, you don’t understand the real issue.”

You could disagree. But that would place you on the fringe of reality. Someone who doesn’t understand the real issue.

Put aside what he thinks that “real issue” actually might be (he’s a sufficiently crappy writer that a coherent explanation of what that might be never arrives). Forget that we’re talking about some 20-year-old intellectual brat. Focus on the rhetoric, which I find merely a convenient iteration of a consistent right-wing style, from the grassroots all the way up to the commanding heights.

When in 1978 the right-wing former Ford administration Treasury Secretary William Simon published a book arguing—no, asserting—that liberalism was responsible for all of America’s problems, he called it, naturally, A Time for Truth. That’s the sort of thing I’m talking about. The book was actually full of, ahem, untruths. He wrote, of the New York fiscal crisis, “those who choose to understand it”—note the language—“could see a terrifying dress rehearsal of the state that lies ahead for this country if it continues to be guided by…the liberal political formula…. Liberal politics, endlessly glorifying its own ‘humanism,’ has in fact been annihilating the very conditions for human survival.” He went on to offer, as an example, the extravagant pensions its public employees enjoyed even though those were about half or less than those in Los Angeles, San Francisco and Detroit and a third less than in Chicago, and lower than those provided by such blue-chip corporations as GM and Citibank.

Stephen Colbert has usefully labeled this sort of stuff “truthiness.” Indeed Simon’s ghostwriter, a forgotten right-wing hack named Edith Efron, had a well-established gift for truthiness by the time he hired her. Her book The News Twisters purported to be an objective study proving the networks followed “the elitist-liberal-left line in all controversies”—or actually 80 percent of the time, according to her scientific-sounding methodology, which, to give one example of her rigor, counted the time Hubert Humphrey excoriated “extremists of the left and of the right” on the 80 percent side of the ledger.

A time for truth indeed.

How characteristic is this of the right-wing mind? Consider that it was the entire point of Barry Goldwater’s election slogan “In your heart you know he’s right.” And consider a 1956 circular for Human Events: it read, “conservatives are already in the majority—in your state, in almost every state.” The third-party candidate Human Events backed that year, T. Coleman Andrews, who was campaigning to ban the federal income tax, got only 6.1 percent in his best state. But that must have been because the liberals were just that perfidious. Such was the argument, in 1964, of Phyllis Schlafly’s A Choice, Not An Echo, about why a conservative had never won Republican presidential nominations. In their heart, everyone knew conservatism was right. If Gallup polls said otherwise, that was only because, Schlafly wrote, Gallup “asked a lot of questions of a very few people” in order to “come up with answers that pleased the New York kingmakers.” (Her insight has proven an imperishable one on the right, as Mitt Romney learned to his detriment.)

I witnessed the radicalism of conservatives’ lack of cognitive empathy firsthand in, of all places, William F. Buckley’s dining room. Not from Buckley himself, he of relatively blessed memory, considering the conservative competition these days—he was one of the few conservative thought leaders with a history of treating liberals, including me, with intellectual respect. From another of Buckley’s guests, a National Review donor who honestly looked a little bit like this guy. I had been invited to dine (I was served by a butler!) at one of Buckley’s fortnightly “stag” dinner parties, and hold forth on my book about Barry Goldwater. Old Moneybags buttonholed me on the way out. The dialogue honestly went like this:

“Yes. I have a whole chapter about it in my book.”

He looked at me searchingly. The sincerity, really, was aching. “And it didn’t make you a conservative?” He honestly couldn’t believe it could be so. It was beyond his poor powers of epistemological empathy to comprehend.

Indeed such epistemology had its own philosopher—proving “epistemology” is no mere metaphor here. It is Ayn Rand, who wrote, in Atlas Shrugged:

A is A. A thing is itself. You have never grasped the meaning of his statement. I am here to complete it….Whatever you choose to consider, be it an object, an attribute or an action, the law of identity remains the same. A leaf cannot be a stone at the same time, it cannot be all red and all green at the same time, it cannot freeze and burn at the same time. A is A. Or, if you wish it stated in simpler language: You cannot have your cake and eat it, too….All the disasters that have wrecked your world, came from your leaders’ attempt to evade the fact that A is A. All the secret evil you dread to face within you and all the pain you have ever endured, came from your own attempt to evade the fact that A is A. The purpose of those who taught you to evade it, was to make you forget that Man is Man.

The blogger and political theorist Corey Robin recently unearthed a rebuttal to such a proposition from none other than the great Ludwig Wittgenstein, who wrote in Philosophical Investigations (which, to be fair, came out in 1953, before Atlas Shrugged, which arrived in 1957, thus Wittgenstein did not have the benefit of Rand’s superior intellect to set him straight), “‘A thing is identical with itself.’—There is no finer example of a useless proposition.”

But it’s hardly useless if you’re a truly hard-shell right-winger. For it is fundamental to maintaining your psychological sense of yourself. It keeps you healthy and sane.

Or at least sane enough to write insane things. To take the example of another text from our friend at the University of Wisconsin who’s arrogated himself the responsibility to truth-shower us on the subject of the nonexistence of rape culture, here is an astonishing example of the existence of rape culture: a tweet that he identifies as the “funniest pickup line I’ve ever heard,” “How do I know we’re going to have sex tonight? I’m stronger than you.”

And how do I know about that tweet? Because it turns out the kid is no ordinary anonymous undergraduate. He’s the publisher of the right-leaning gossip site UW Madison Confessions, which, The Daily Beast reported, made enough of a stir to get noticed by The New York Times. I predict big things for this guy in modern conservatism’s literary firmament. He got exactly what it takes—from the epistemology to the misogyny to the stupidity. The whole package, all the way down.

Dave Zirin on the links between rape culture and jock culture.