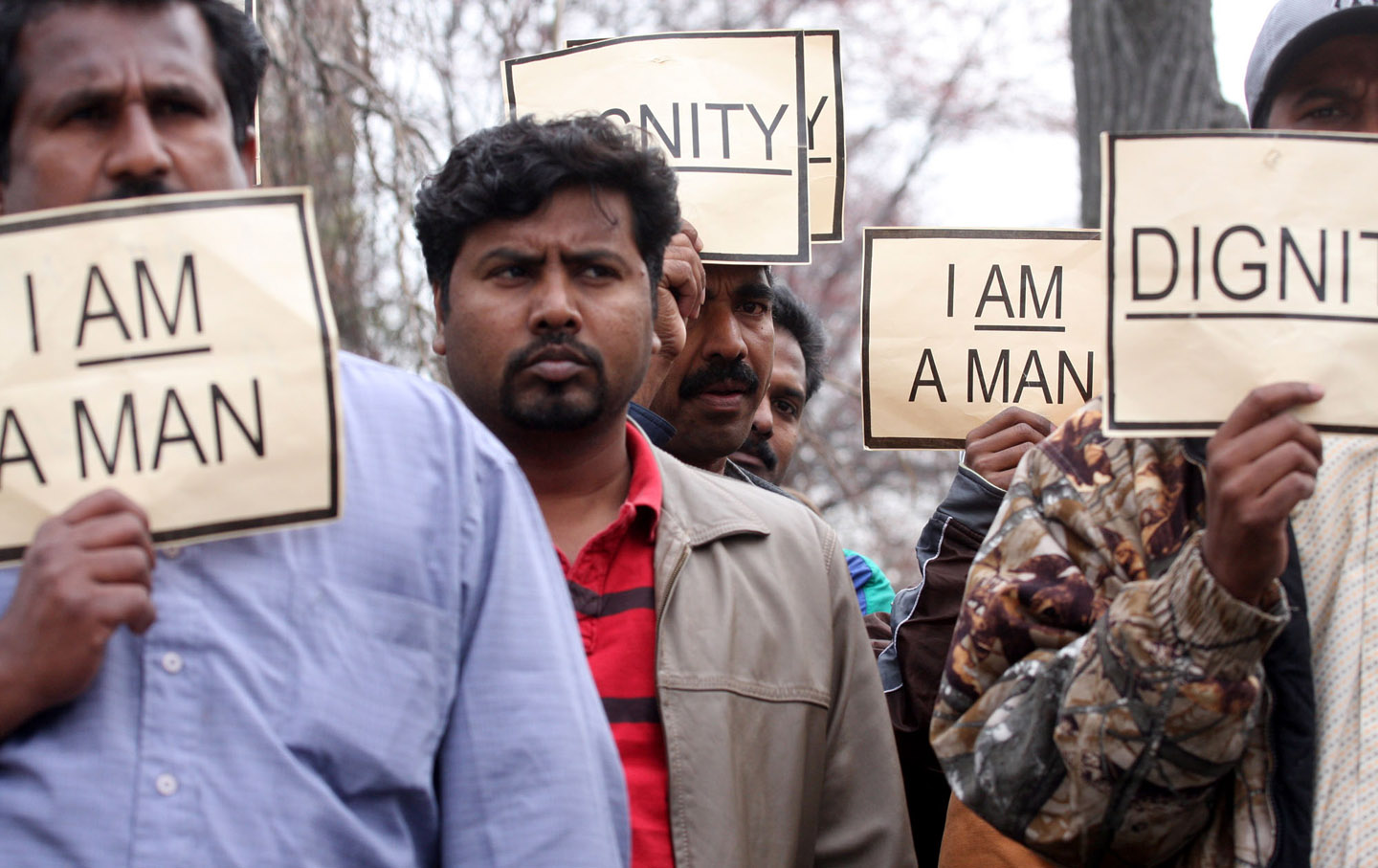 H2-B guestworkers, who labored in abusive conditions in the aftermath of Hurricane Katrina, protest outside the Embassy of India in Washington. (AP Photo/Lauren Victoria Burke)

They came from India to repair the Gulf Coast after hurricanes Katrina and Rita, and were repaid with months of abuse. On Katrina’s 10th anniversary, both the workers and their bosses are finally getting their due. Following a landmark lawsuit victory in February, the maritime company that imported the roughly 500 “guestworkers” to repair storm-damaged Gulf Coast oil facilities has officially apologized as part of a $20 million settlement for 12 suits, in one of the largest human trafficking cases in US history.

The Southern Poverty Law Center (SPLC), which helped represent the workers, called the settlement “unprecedented,” in that it mandated the contractor that employed the workers, Signal International, to issue a formal apology, as part of its bankruptcy proceedings, conceding its “fail[ure] to ensure that the guestworkers were treated with the respect and dignity they deserved.” But the gesture was monumental mainly because it bookended a case that exposed one of the darkest corners of the labor force: The huge transnational black market in trafficked migrant labor.

The workers involved in the settlement came to the United States in 2006 on the H-2B visa program, which places guestworkers in various low-wage non-farm industries, such as hospitality and construction. They were brought to this country through a recruitment scheme that has become routine across the Global South: in exchange for fees as high as $20,000, the men were promised good jobs and a chance to gain green cards for their families.

They ended up in a fortress-like encampment, with up to 24 men cramped in segregated quarters, for which they were charged about $1,000 a month. Their dismal conditions, to which non-Indian workers were not subjected, helped the company “save” $8 million in labor costs.

Signal’s letter refers to grievances raised in the workers’ Equal Employment Opportunity Commission complaint, alleging racial discrimination and retaliation against organizing actions. The company shunted the Indian workers into isolated “man camps,” forced them into “the most undesirable work” at the site, and stoked a climate of hostility by calling them “thieves,” “animals,” and “fucking Keralites.” They faced constant threat of deportation, which, combined with massive debts and intimidation from on-site security forces, terrorized them into silence. Until they decided to reach out to a budding movement of grassroots labor activists that emerged in the storm’s wake.

In early 2008, the workers launched their nationwide campaign with protests at a Mississippi shipyard and in Washington, DC.

Wearied by a weeks-long hunger strike, Rajan Pazhambalakode, who had come to earn legal passage for his family, told The New York Times, “I sold my home to raise that money…. I can’t go home empty-handed because of that great debt.”

That June, the group, calling itself the Indian Workers’ Congress, demanded accountability: “Because of the Department of Justice, our lives are on hold. We are paralysed. We live in constant terror of deportation…. The Department of Justice lets a criminal trafficker carry on its business—while the workers who had the courage to report Signal crimes are treated like criminals.”

Industrialized debt bondage greases the gears of the global trafficking system, particularly in Asia, which is known for its especially sophisticated recruitment infrastructure. Under this modern indentured servitude, similar abuses have occurred in other wealthy countries like Qatar, where laborers are working themselves literally to death in desert heat to construct World Cup facilities. US guestworker programs import hundreds of thousands of temporary workers through a sparsely regulated patchwork of visas, supposedly to fill labor shortages in sectors ranging from software programming to agriculture.

Under public pressure, the Labor Department has implemented some H2-B reforms, including a ban on recruitment fees, harsher employer penalties, and protections for workers from discrimination and retaliation for workplace organizing. But SPLC attorney Dan Werner tells The Nation that, given the weak oversight of industries (which campaigned to block the reforms in Congress and the courts), “Those changes don’t come close to what is necessary to prevent these abuses from happening in the future…. Fundamentally, what makes H-2B visas vulnerable to abuse is that [workers] can’t change jobs [to escape an abusive employer] without losing their immigration statuses.”

Moreover, despite rules against predatory debts, lax oversight of recruiters means the guestworker market will “remain untouched and unchanged by changes in the H-2B program.” And immigration reform proposals that could potentially help protect workers’ rights across all visa programs, as well as for undocumented workers, have repeatedly been smothered in Congress.

But the multiethnic alliances that rose out of Katrina’s disaster economy have pressed forward and evolved into the National Guestworker Alliance. The group has taken on various cases that reflect the institutionalized exploitation of immigrants of color: Jamaican guestworkers imported to clean luxury guesthouses but robbed of their wages; Mexicans recruited for low-wage construction work with a $3,000 “promissory note” chaining them to their employer; Thai workers roped into $11,000 loans to secure farm jobs in the United States, then forced to work on post-disaster reconstruction and forced to live and work—sometimes at gunpoint—at the site of a squalid, neglected hotel. All these workers had one thing in common: They were lured from poorer countries based on fraudulent labor contracts and then became victims of a broken social contract. This country’s current immigration regime was founded on existing deeply ingrained racial and class inequalities. And it continues to militate against every popular initiative to expand the constitutional rights of citizenship.

Saket Soni of the National Guestworker Alliance wrote in The Nation about the lessons to be learned from the ethical challenge that immigrant activism has posed to the guestworker system’s hollow promises: “how did the Signal workers overcome their greatest fear? By coming together to take collective action. All around America, there are workers coming together to imagine an economy in which they’re truly free…. If we can imagine freedom in the face of fear, as the Signal workers did, then we can start to build an economy that will guarantee it.”

On today’s Gulf Coast, this vision remains far from reality. But 10 years after the flood, many of the newcomers who are rebuilding the economy are also the activists driving the next wave of social movements. And in linking American shores to a global crisis, they’re reconstructing economic citizenship.