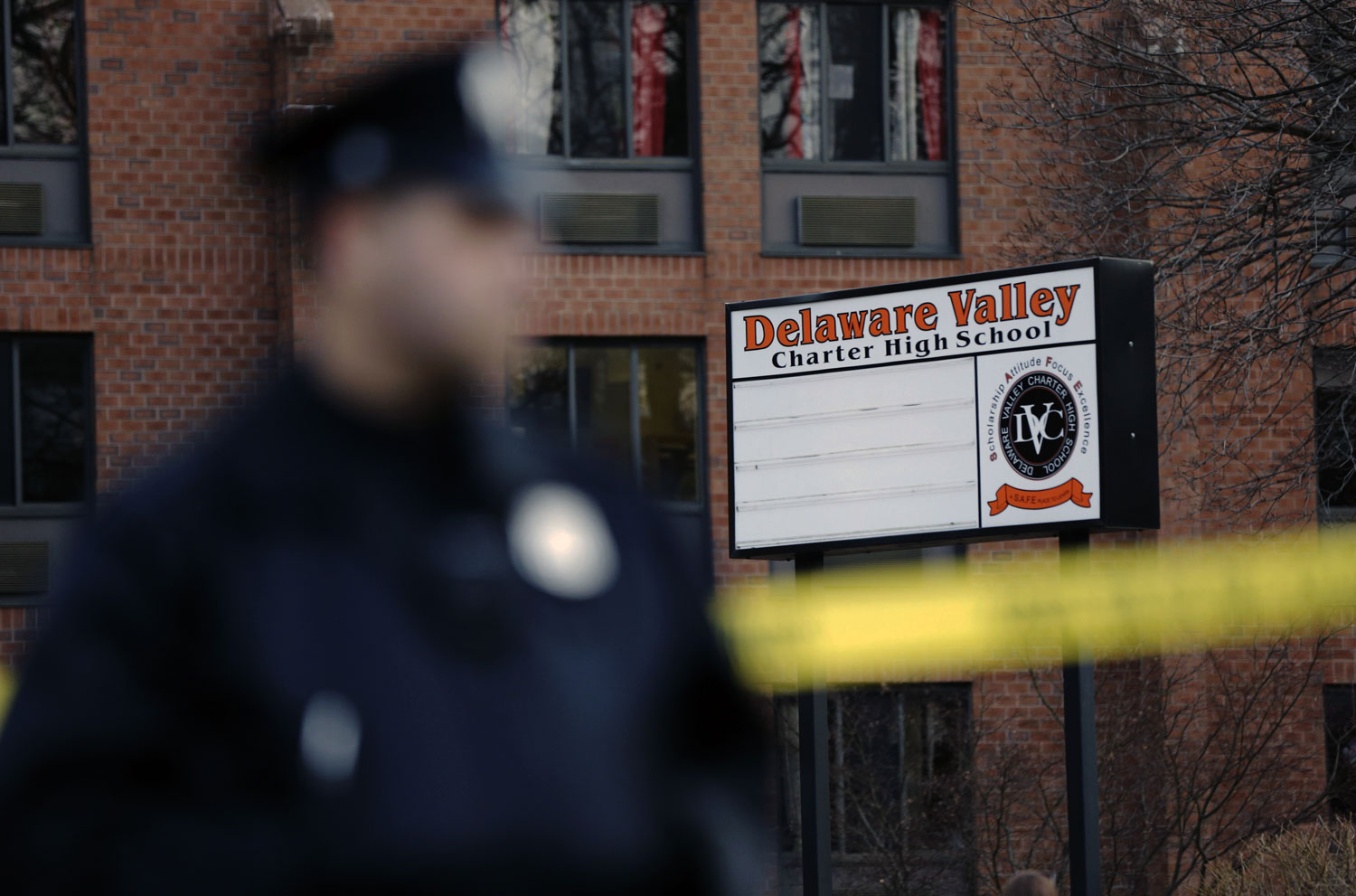 A police stands by caution tape at the Delaware Valley Charter School Friday in Philadelphia, where two students were shot on January 17, 2014. (AP Photo/Matt Rourke)

The Associated Press counts at least eleven US school shootings since the start of the 2013–14 academic year, more than eight months after Congress rejected a gun control proposal prompted by the massacre at Sandy Hook Elementary.

Experts say that rate represents no real reduction in school shootings, despite ramped-up security in districts across the country. Here’s the AP:

The recent budget deal in Congress provides $140 million to support safe school environments, and is a $29 million increase, according to the office of Sen. Tom Harkin, D-Iowa, chairman of the Senate Health, Education, Labor and Pensions Committee.

About 90 percent of districts have tightened security since the Newtown shootings, estimates Randi Weingarten, the president of the American Federation of Teachers.

They’ve taken other steps, too, such as requiring ID badges and dress codes. Similar to fire drills, some schools practice locking down classrooms, among their responses to potential violence.

Attention also has focused on hiring school resource officers, sworn law enforcement officers who are trained to work in a school environment, said Mo Canady, executive director of the National Association of School Resource Officers. He said his organization estimates there are about 10,000 of them in the U.S.

AP did not list the eleven shootings, which appears to only include incidents that occurred on school property during school hours, and did not include shootings at colleges or universities. I reviewed school shootings since August, according to these parameters, and also counted eleven incidents. Here is the list:

August 21, 2013—A 20-year-old man fired at least a half-dozen shots at an Atlanta elementary school, starting a shootout with police officers. School administrators successfully evacuated 800 or more students to safety. No one was hurt.

August 22, 2013—A gun went off twice inside a kindergartner’s backpack during breakfast at Westside Elementary School in Memphis, Tennessee. No one was hurt.

August 30, 2013—A shooting at a high school in Winston-Salem, North Carolina left one student wounded. It was the second gun-related incident at the school in 2013. The school went on lockdown in January after a pistol was found in a student’s backpack.

October 15, 2013—A student committed suicide with a gun at Lanier High School in Austin, Texas.

October 24, 2013—A student opened fire at Sparks Middle School in Nevada, killing one teacher and injuring two classmates. He then fatally turned the gun on himself.

December 4, 2013—A student at West Orange High School in Florida pulled out a gun during an argument with a classmate and shot him, resulting in an injury.

December 13, 2013—A shooting at Arapahoe High School in Colorado left two students dead, including the gunman, and one injured. Authorities found two molotov cocktails at the scene.

January 9, 2014—A student shot a classmate in the thigh, wounding him, at Liberty Technology Magnet High School in Jackson, Tennessee. He then left campus in a car before authorities found him thirty minutes later.

January 18, 2014—A 17-year-old shooter opened fire at Delaware Valley Charter High School in Pennsylvania, injuring two. He turned himself in the next day.

January 28, 2014—A police officer shot a teen in the wrist at Roosevelt High School in Honolulu after he cut an officer with a knife and punched two others.