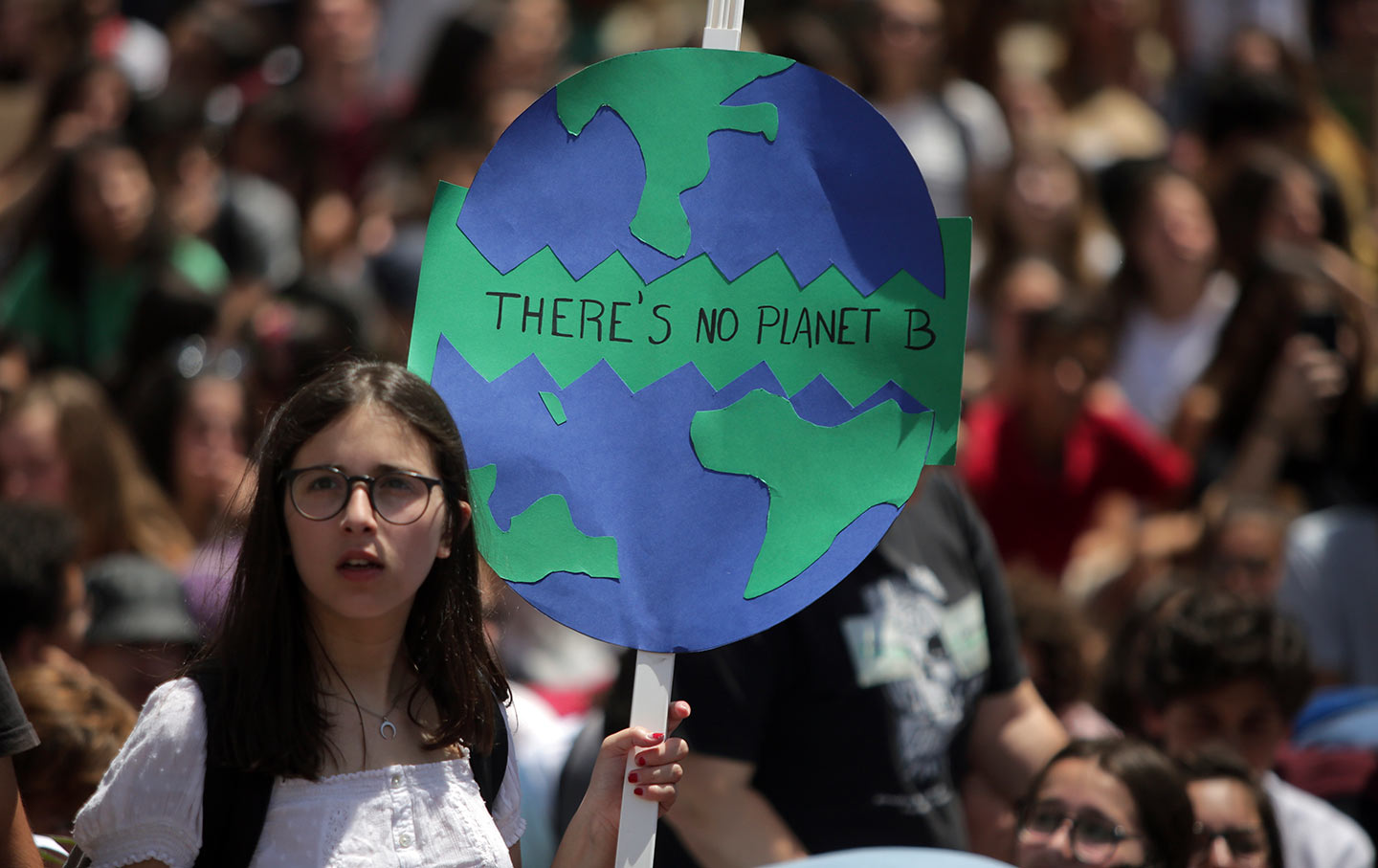 A protester holds a sign outside Portugal’s parliament during a student strike for climate change action, on May 24, 2019. (AP Photo / Armando Franca)

On May 24, activists gathered in New York City for the Global Climate Strike, joining over a million people in more than 1,600 cities across the world in demanding that politicians take decisive actions against climate change. Hundreds of protesters, including elementary-school students and their parents, middle schoolers, high schoolers, and college students marched down Broadway Avenue in midtown Manhattan holding signs advocating for the Green New Deal and depicting the earth on fire.

This latest global strike—the first took place on March 15 and brought together about 1.4 million people in over 120 countries—is evidence of a growing movement of teenagers and youths deeply concerned for our collective future. Many of the teens that marched in May were spurred to action by the photos and videos circulating on social media of the “Fridays for Future” youth climate strikes, first sparked by the 16-year-old Swedish climate activist Greta Thunberg in August 2018. Now, nearly a year after Thunberg’s first protest in front of the Swedish Parliament, the Fridays for Future movement continues to expand its political support worldwide as strikes in the United States and around the world draw in massive crowds of young people.

Organizers and activists are hoping to sustain the energy and momentum behind this booming youth climate movement to push for tangible political change. In New York, Spencer Berg, a co-organizer and group leader with Fridays for Future NYC, said he’s seen support for both the strikes and climate policy grow in recent months. He credits some of the attention policies like the Green New Deal are getting to the strikes and other climate-justice groups. “Activism works, we need activism,” he said. “The more we do, the more we keep going, the more we’ll get done.”

Berg was excited to learn that New York City Council Member Ben Kallos recently announced a “resolution declaring a climate emergency and calling for an immediate emergency mobilization to restore a safe climate.” Berg cited it as further evidence that the strikes were shifting policy priorities and changing public opinion about climate change—earlier in May, the UK Parliament had declared a climate emergency after days of protests by the Extinction Rebellion climate movement. “We also believe that if NYC does it [declare an emergency], it’ll start a domino effect for other cities too,” he said. Eventually, Berg and others hope the city will completely divest from fossil-fuel companies, invest in clean infrastructure, and implement the Green New Deal as soon as possible.

Berg credits the regular strikes with helping to raise public awareness. According to a CNN survey from April, 96 percent of Democrats and Democratic-leaning independent voters said it was important for a presidential candidate to take “aggressive action to slow the effects of climate change.” That can be used to pressure politicians—after the governor of Washington and 2020 presidential candidate Jay Inslee proposed a climate debate this April, the activist organization US Youth Climate Strike published a petition calling for a debate for all presidential candidates to outline their environmental policies. “With the magnitude of the oncoming climate crisis it’s no longer sufficient to have a single token environmental question that 2020 candidates get to brush off with a soundbite,” the petition reads.

Fifteen Democratic presidential candidates, including Amy Klobuchar, Elizabeth Warren, Bernie Sanders, Kirsten Gillibrand, Julián Castro, and—most recently—Joe Biden have agreed to participate in a climate debate. However, despite the widespread support, the Democratic National Committee recently announced that it will not host a climate debate. Activists and organizations expressed their disappointment on social media and vowed to “fight back” against that decision.

In another positive development, the youth climate strikes have also been able to engage a younger and more diverse audience than past climate movements. In the United States, the “green movement” has historically been overwhelmingly white and older, leaving environmental organizations without many people of color on staff. Several publications have studied the homogeneous, largely white makeup of climate leadership in the United States, and Dorceta Taylor, an environmental sociologist at the University of Michigan, published a study early last year highlighting that only 3.9 percent of over 2,000 environmental nonprofits release data on racial diversity. Organizations that have released diversity information often reveal that there are very few people of color on their boards or staff.

As a result, although climate change is disproportionately affecting developing countries and communities of color, a lot of coverage focuses on Western activists, who often already have resources at their disposal to face a changing climate.

Many young climate-strike leaders are already aware of the need for intersectionality when fighting for awareness and policy change. In a TED speech, Thunberg called for climate equity, pointing to developing countries in need of improved infrastructure and adequate access to renewable energy. She said it was the responsibility of wealthy nations to drop their emissions before expecting poorer countries to make major changes. “How can we expect countries like India or Nigeria to care about the climate crisis if we, who already have everything, don’t care even a second about it or our actual commitments to the Paris Agreement?” she asked. Isra Hirsi, a co-founder of Youth Climate Strike, was recently featured in an AJ+ video about her climate activism and her experience as a black teenager in the environmental movement. She called for more inclusivity and asked more privileged activists and groups to share resources.

This more nuanced international approach has motivated younger people of color to join the climate protests. Aeriell Guy, a high-school student from the Bronx who was attending the May 24 Global Climate Strike in New York City, says she decided to participate after seeing Greta Thunberg’s call to action on social media. Guy, who along with her friend wore a face mask with the “CO2” scribbled on in black marker as they rallied and chanted with other protesters in Times Square, described thinking about how air pollution has forced people in cities like Beijing to wear face masks in order to breathe properly. “If we don’t take that into consideration now,” she said, “that’s going to be us.”

Guy has participated in the Women’s March and has marched for racial justice and immigrant rights. She said that such protests taught her that fighting for climate justice is intersectional. Recent hurricanes have made her nervous for her family in Jamaica and several of her classmates who have families in places like Puerto Rico and the Dominican Republic. Guy has also seen how climate change and pollution have impacted her own neighborhood in the Bronx. According to a 2009 study, over 15 percent of children ages 4 and 5 in the borough suffer from asthma, compared to only 9 percent of children the same age citywide. The New York City Health Department has stated that black and Latino communities deal with disproportionately high rates of asthma, a condition that can be exacerbated by air pollution and inconsistent weather. This can lead to higher rates of hospitalization, causing people from those communities to miss work or school.

Spencer Berg, the organizer of Fridays for Future, said that in addition to having weekly strikes and periodic global protests, he wants other groups to consider direct actions, especially working with vulnerable communities and providing them a platform. Berg plans to work together with other organizations to highlight communities in need and share ideas. In particular, he wants opening speeches at future actions and events in the future to highlight people who are affected the most by climate change. “Environmental racism is a problem we have to keep in mind,”he said. “We can’t leave anyone behind.”

Berg hopes that the next global strike, which will be held in September, will attract even more protesters. It might be the largest protest yet—Greta Thunberg has called it a general strike and is asking adults to walk out of work and join student activists. But until then, students will continue their Friday strikes to call out politicians and advocate for policies that guarantee a safe future for them and for the generations to come.