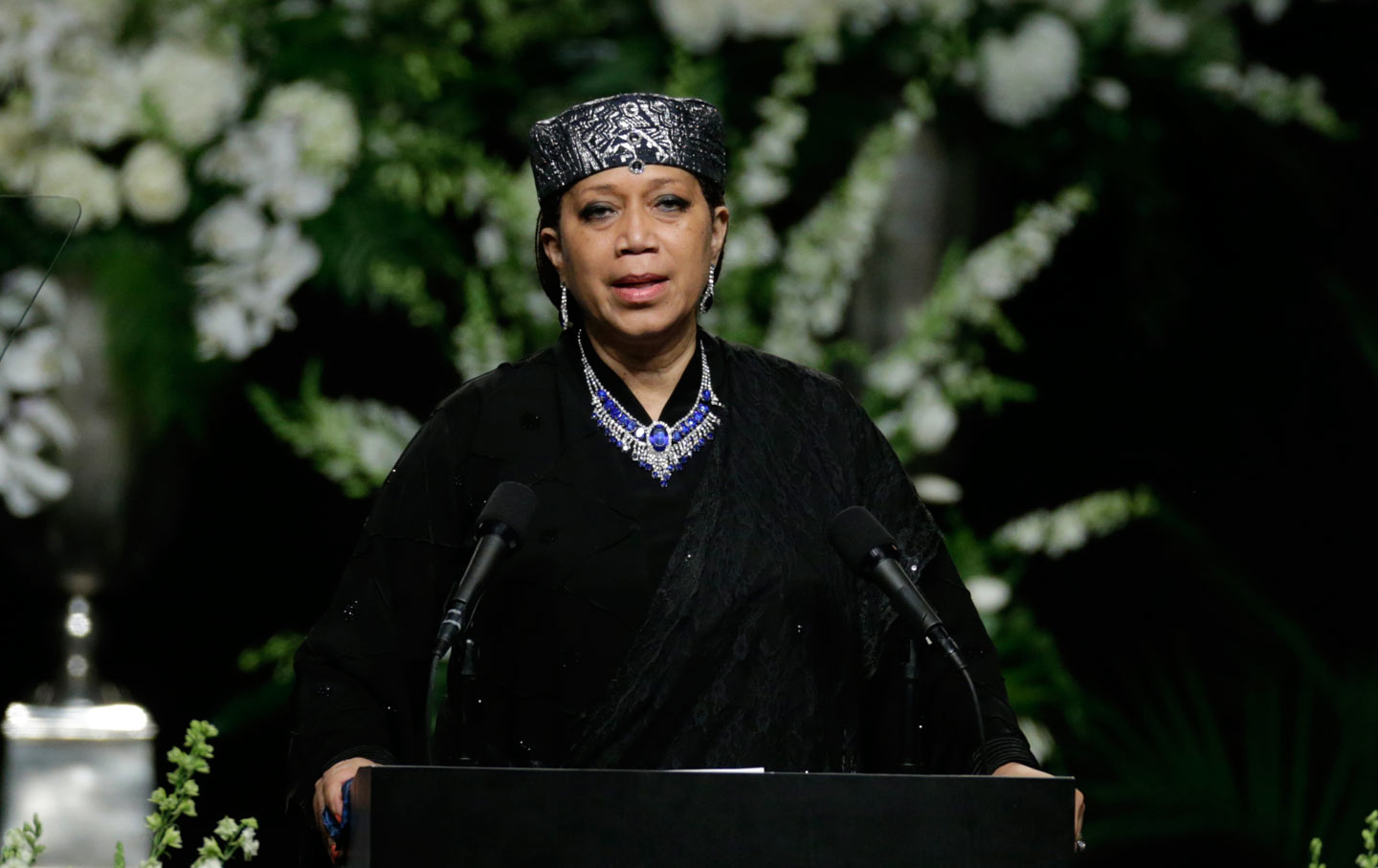 After Muhammad Ali’s remarkable funeral service last Friday, transcripts of some of the eulogies immediately went up online. If anyone wanted to know what Bill Clinton or Billy Crystal had to say, it was easy enough to find. Yet nowhere on the Internet could you find a transcription of what for me was the most historically significant and deeply moving eulogy of the day: the words of Malcolm X’s daughter Ambassador Attallah Shabazz. Her words were more than a heartfelt remembrance. They help provide a crucial puzzle piece to the past. Many write that after Muhammad Ali—literally—turned his back on Malcolm X in 1964 and that marked the end of their relationship. Yet here was Attallah Shabazz writing a counternarrative, one that consisted of a deeply paternal and loving decades long relationship after Malcolm’s death. Ali was there for her and her siblings in a manner that speaks to a bond that couldn’t be broken by any religion or organization.

I contacted Johnny Smith, co-author of the book Blood Brothers: The Fatal Friendship Between Muhammad Ali and Malcolm X, for his thoughts on her words. He said:

Attallah Shabazz made clear that she and Ali shared something important—the loss of Malcolm, a man they both truly loved. Listening to her speak, I could not help but think back to January 1964, when Malcolm, his wife Betty, and their children visited with Ali in Miami. Ali played with Attallah and her sisters, clowning and teasing them with affection. Malcolm said later, “I liked him. Betty liked him. Our children were crazy about him.” They were like family then, and that bond has stood the test of time, a credit to Betty Shabazz who raised her daughters to forgive those who once condemned their father. Yet the bond that Muhammad and Attallah developed long after Malcolm died also demonstrates that Ali sought forgiveness and that she helped him find “the light of understanding” as her father would have liked. In their shared grief, he and Attallah cried together and laughed together. Her eulogy reminds us that Malcolm had forgiven Ali for not speaking to him. Attallah helped relieve Ali of the deep pain that he had buried years after Malcolm died. And in return Ali helped Attallah better understand her father.

All should watch the speech, but here it is as a written document: a resource that should be studied and treasured.

May peace be unto all of us. As this is a home-going celebration, I find myself balanced between that of celebration and depletion, loss. And somehow or another, my breathing capacity has been weakened this past week so I ask all of you gathered and afar to please muster up and transmit a bit of your air to me.

In the memory of Muhammad Ali, thank you all. [Shabazz then says thank you in numerous languages] and more as the globe centers at this very moment amidst this holy month of Ramadan where every two hours, there’s a time zone praying and including Muhammad Ali and his family in their thoughts. Amidst that are the prayers of all faiths, all those touched, even those that don’t claim a religion are feeling something right now in honor of the family and the memory of their father, husband.

In the spirit of my parents, Malcolm X Shabazz and Dr. Betty Shabazz, in the presence of my five younger sisters, our children and our grandchildren, I would like to first honor his beloved wife, my sister, Lonnie Ali. For all the strengths that you know and that resonate beyond, sometimes you do need a little help, no matter how magnificent you are. And indeed those that were with him that loved him, his family members, sustained that. His nine children, and I will name them—Maryum, Rasheda, Jamillah, Muhammad Jr., Khaliah, Miya, Hana, Laila, and Asaad—as well as their mothers and the third generation of Ali grandchildren who accompany them.

To his only brother, Rahman, to his extraordinary example of a best friend, Howard Bingham, and to his sister in law, Marilyn Williams, for all the grief that I am depleted by and others are feeling by his transition, there’s none comparable to yours and I know that. On this day and those to come, as you redefine your waking days, with a life without him here presently, very different. Photos, memories, all the things that we have of him that keep him going, he touched you differently and that has to be honored and recognized, never forsaken.

Just know that when you are the descendant of, in the presence of, someone whose life was filled with principle, that the seed is in you so that you have to cultivate that responsibly as well. This moment is very meaningful for me to have been amongst those chosen and blessed by Muhammad himself and affirmed by his wife Lonnie to take part by sharing of prose a statement during this home-going ceremony. While he and I had a treasured relationship, the genesis of this love was through the love of my father. Muhammad Ali was the last of a fraternity of amazing men bequeathed to me directly by my dad.

Somewhere between me turning 18, 19, or 20, they all seemed to find me somehow guided by an oath or a promise to my dad, long after him leaving this earth to search for me. And they did. Each one remaining in my life until joining the rest of the heaven’s beloved summit of fearless humanitarians. This included Muhammad Ali, who my dad loved as a little brother 16 years his junior, and his entrusted friend.

There was a double-take when I came upon him, [once a child], and now looking right into his face, and you know how he is, he gives you that little dare, like, “Is that you?’’

From the very moment we found one another, it was as if no time had passed at all, despite all the presumptions of division. Despite all the efforts at separation. Despite all the organized distancing. We dove right into all of the unrequited, yet stated, and duly acknowledged spaces we could explore and uncover privately. We cried out loud. His belt, his grief for having not spoken to my dad before he left, and then just as loudly we’d laugh about the best of stories that can’t be repeated. He was really very funny.

What was significant as brothers for my father and Ali, was their ability to discuss openly anything, all facets of life. Namely the true meaning of men with great responsibilities bestowed to them and how to make an equitable difference in the lives of others. A unifying topic was faith and ecumenical faith, respect for faith, all faiths, even if belonging to one specific religion or none, the root of such being the gift of faith itself. So in his own words, he wrote:

We all have the same God, we just serve him differently. Rivers, lakes, ponds, streams, oceans all have different names but they all contain water. So do religions have different names and yet they all contain truth. Truth expressed in different ways and forms and times. Doesn’t matter whether you’re a Muslim, a Christian or a Jew. When you believe in God, you should believe all people are part of one family. For if you love God, you can’t love only some of his children.

His words and certainly ideals, shared by both men. Love is a mighty thing. Devotion is a mighty thing. And truth always reigns. Having Muhammad Ali in my life somehow sustained my dad’s breathe for me, just a little while longer. Fifty one years longer, until now.

I am forever grateful that our union on this earth together allowed for me a continuum of shared understanding, preserved confidentialities, and the comfort of living in his hometown of Louisville, Kentucky for the past six years. That was not a plan. And mostly for the gift of knowing and loving his wife and children forever forward, as my own family—know that.

As the last of the fraternity reaches the heavens, my heart is rendered ever longingly for that tribe, tribe of purpose, tribe of significance, tribe of confidence, tribe of character, tribe of duty, tribe of faith, tribe of service. We must make sure that the principle of men and women like Muhammad Ali and others, who dedicated their very being to ensure that you get to recognize your own glory is sustained and passed on like that Olympic torch. My dad would often state when concluding or parting from one another: “May we meet again in the light of understanding.” And I say to you with the light of that compass, by any means necessary.

A video of the speech can be found here.