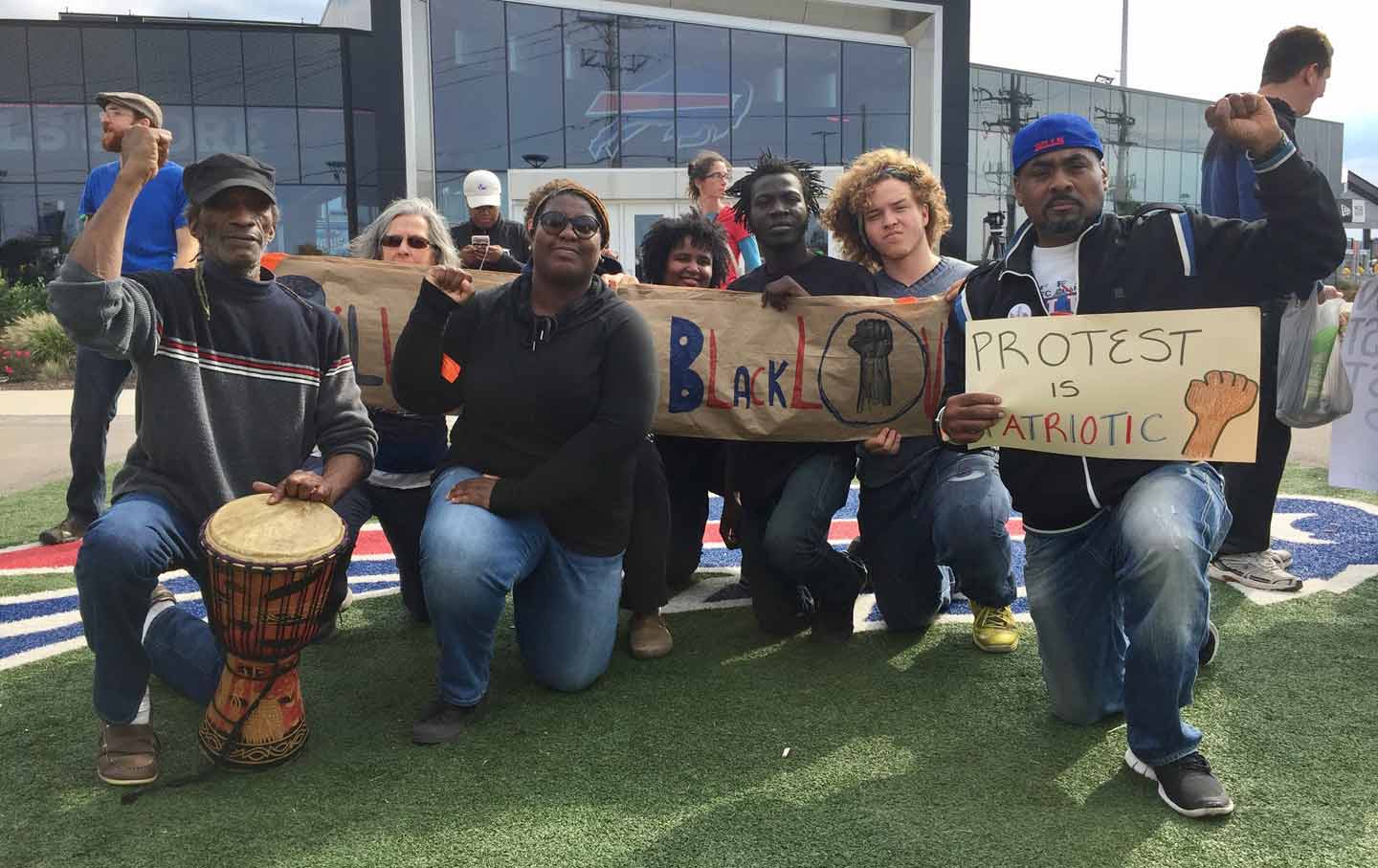 Sunday, October 16, was the 48th anniversary of that indelible moment in 1968 when John Carlos and Tommie Smith put their heads down and fists up on the Olympic medal stand as the anthem played, their friend the Australian silver-medalist Peter Norman standing in solidarity with their protest. Forty-eight years later to the day, in Buffalo, New York, Colin Kaepernick made his first start of the 2016 season as his 49ers took on the Bills.

He arrived at the game with his Afro picked out, wearing a Muhammad Ali T-shirt. Outside the stadium, in one of the most notorious tailgating spaces in the NFL, people were selling T-shirts showing Kaepernick with a rifle scope trained on his body and the phrase, “WANTED: Notorious Disgrace to America.” Fans were caught on camera “spearing” effigies of Kaepernick, complete with giant fake Afros. On social media there was tape of one fan yelling, before one spear, “Tackle the Muslim!”2

Inside the stadium the Bills were not much more welcoming. The team’s coach Rex Ryan is a Trump supporter who has spoken at rallies next to the wannabe despot and supports him because he “has the courage to say what is on his mind.” Buffalo Bills guard Richie Incognito, who was suspended from the league for bullying, a swirl of sexual-assault accusations, and calling teammate Jonathan Martin, all in good fun, “a half n——,” was on the sidelines. He also supports Trump for president. And then there is Bills star running back LeSean McCoy, who mocked Kaepernick by inviting the local police to the game. 3

One could be tempted to just write off the Buffalo Bills franchise and their fans entirely. But not all fans were playing this game. A group calling itself Just Resisting (JR), a collective of organizers and artists of black people and other people of color, and Showing Up for Racial Justice (SURJ) Buffalo, a chapter of the national organization of white people organizing other white people for racial justice—about 100 people in total—took to the stadium to fight back with what they called “a woke tailgate.”

The group wanted to not only show solidarity with Colin Kaepernick but also to raise the issue that was the catalyst for Kaepernick’s protests: police violence and the devaluing of Black Lives. They gathered three hours before kickoff “in lot 4a behind the Louie’s Hot Dog.” At noon, they rallied, drummed and chanted by Gate 5, with signs that read #BillsFansForBlackLives.4

“This protest is about the values we have as people,” said JR organizer, Shaketa Redden. “The head coach of our NFL team endorses an openly racist candidate. Rex Ryan can go home and rest after the game but, as blacks in America, we are not afforded that luxury. We can’t be silent in one of the most segregated and poorest cities in the country. That’s why I’ll be taking a knee.” 5

If you have ever tried to bring a protest to any football tailgate, then you know how brave these people are. The threat of violence was ever-present, but they were ready. Over 75 people took de-escalation training to prevent being brutalized by the aggro drunks of Bills-nation. It is difficult to not think about the early civil-rights activists who practiced being on the receiving end of torrents of abuse in church basements before sitting in at whites-only lunch counters. Sure enough the abuse came, but not unlike the Bills coach or Trump himself, it was more tough-guy posturing than any actual heart to challenge the people who had arrived unified and ready to make a stand.6

At 1 pm, as the anthem played, Colin Kaepernick took a knee with two teammates, linebacker Eli Harold, and safety Eric Reid. Fitting for this anniversary of 1968, cornerbacks Keith Reaser and Rashard Robinson, safeties Jaquiski Tartt and Antoine Bethea, and running back Mike Davis raised their fists. As Kaepernick kneeled, Buffalo fans chanted “USA,” less as a point of pride than a threat. A police officer consciously photobombed Kaepernick’s protest, standing a few feet behind him with a salute. A friend’s parents who were at the game said to me, “It was scary. It was the closest I will ever come to being at a Trump rally.” A beer bottle was allegedly thrown at Kaepernick, but it did not connect.7

Kaepernick and the other 49ers were not alone. As the anthem played, the 100 people with JR and SURJ, took a knee. 8

“Taking a knee in solidarity with Kaepernick during the anthem is one of the most American and patriotic actions that one can take,” said Cai Blue, an organizer with Just Resisting. “We would be doing a great disservice to the people who have suffered unjustly by the hands of others by not calling attention to the issues that continue to persist.” 9

The fact that so many white anti-racists took a knee in support of black activists also was the perfect way to remember not only John Carlos and Tommie Smith but also Peter Norman and the idea that white people have a responsibility to support anti-racist struggle.10

As for the game, the slumping 49ers lost to the surging Bills 45-16. But the final score was about as important as John Carlos’s winning bronze instead of silver in 1968. This was bigger than sports. After the game, Kaepernick was asked about the virulent fan reaction and he said, “I don’t understand what’s un-American about fighting for liberty and justice for everybody.” That’s a question a great many people in Buffalo and around the country should have to try to answer.11

Editor’s note: This article originally stated that “white fans were caught on camera” spearing the effigy of Kaepernick. A reader submitted a video that included one non-white fan participating. We have updated the piece accordingly.