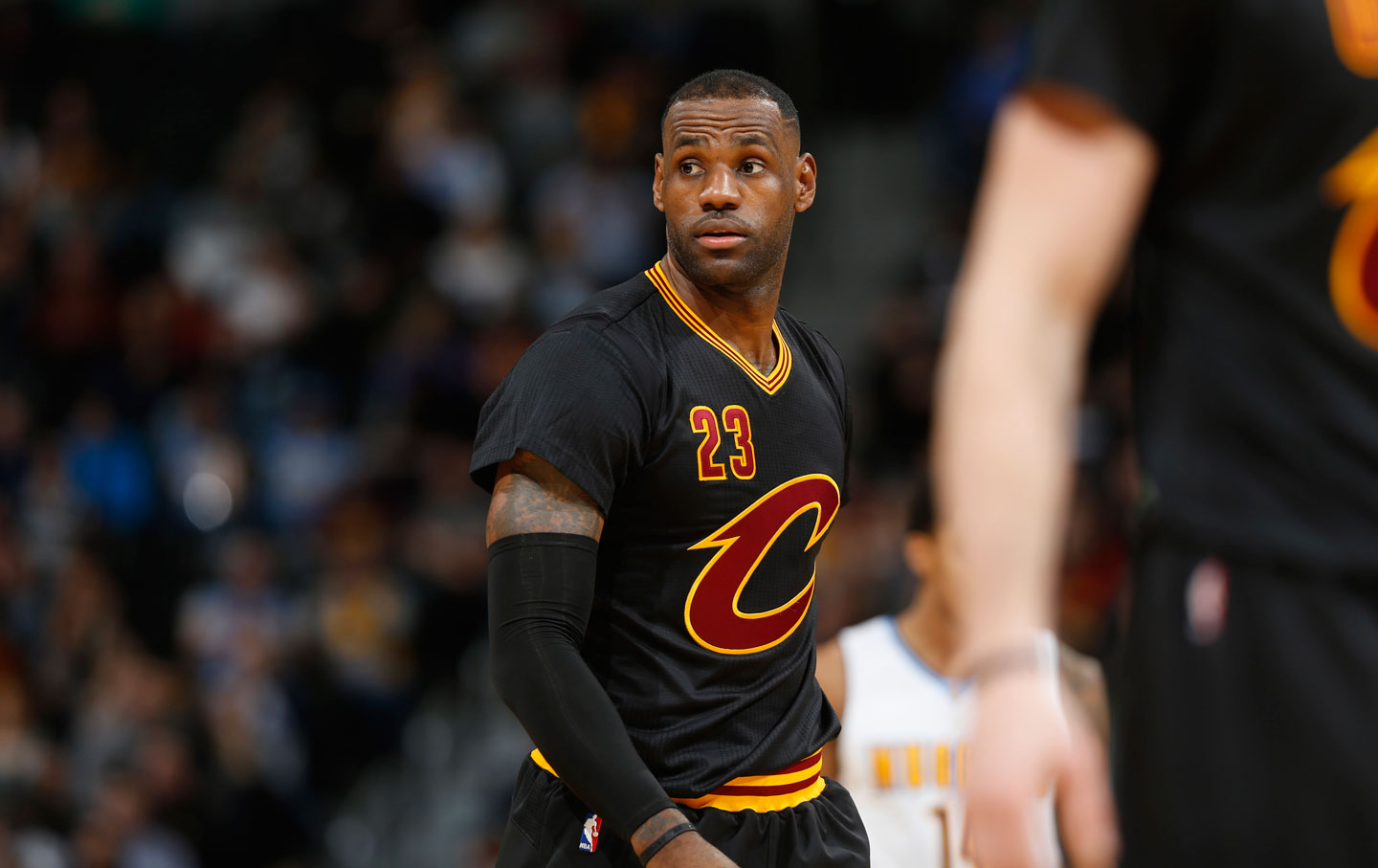 Cleveland Cavaliers forward LeBron James plays in the second half of a game on December 29, 2015, in Denver. (AP Photo / David Zalubowski)

Tamir Rice will forever be 12 years old, sentenced to death by Cleveland’s police for holding a toy gun and “being a child while black.” In the aftermath of the grand jury’s inability to even secure an indictment, Baltimore-based journalist Tariq Toure started the hashtag #NoJusticeNoLeBron which aimed to “Call on LeBron James to lead a collective sit out on MLK day in solidarity with Tamir Rice and his family.” (Read Tariq Toure’s full explanation of his motivations here.)

This demand put before Cleveland’s basketball messiah provoked a biblical-sized backlash comprised of one of the more bizarre combinations of people imaginable: people who love LeBron James and saw the hashtag as some kind of attack against him; people who despise the #BlackLivesMatter movement, particularly some of the young leadership who embraced this call; and people who stand with the struggle 1000% but think in the words of Professor Lou Moore, “the idea of attempting to force a black man into doing anything seems an awful folly for activists to pursue.”

I strongly agree with Lou Moore and countless others that the idea black athletes have some kind of greater responsibility to speak out after such an egregious injustice, is grossly unfair. I’ve written repeatedly that it’s long past time for white athletes to be put on the hot seat. Ask Kevin Love to sit out. Ask Matthew Dellavedova to sit out. Ask them all. Their hometown police murdered a twelve-year-old. It shouldn’t be business as usual in the wake such a tragedy.

But the call for LeBron to sit out one game on the day we celebrate Dr. King’s birth contains a measure of strategic genius that people who stand with #BlackLivesMatter yet disagree with this hashtag, should take seriously.

First and foremost, it is highly disingenuous to pretend that LeBron is just another athlete, especially in Cleveland, and is being asked to boycott soley because of the historic burden foisted upon black athletes to do more than just play. LeBron has asked for this weight, even demanded it. He has dramatically commented on other racist killings, organizing the Heat to pay tribute to the late Trayvon Martin by getting the team to pose in hoodies and having most of the Cavaliers last year wearing “I Can’t Breathe” shirts after the Staten Island police choked Eric Garner to death.

LeBron has also spoken repeatedly about his desire to be a “global icon like Muhammad Ali,” and his dreams of dunking on George W. Bush. He even uses the incendiary Public Enemy track Welcome to the Terrordome in his new Samsung Commercial.

But the fact that Tamir Rice was killed in Cleveland makes the connection to LeBron all the more acute. Upon choosing to return home, LeBron said, “This is not about the roster or the organization. I feel my calling here goes above basketball. I have a responsibility to lead, in more ways than one, and I take that very seriously. My presence can make a difference in Miami, but I think it can mean more where I’m from. I want kids in Northeast Ohio, like the hundreds of Akron third-graders I sponsor through my foundation, to realize that there’s no better place to grow up.”

Again, he has asked for this weight and there is nothing wrong with Tariq Toure, inspired by LeBron’s conscience, to ask him to act upon the killing of one of the precious “kids in Northeast, Ohio.” Tariq Toure’s implicit point is, if you are going to use Public Enemy and say you want to be the Ali of the 21st century, people are going to ask you to back that shit up. Or as Toure wrote more eloquently, “The reason I went as far as to ask you to sit out is because every bit of empathetic work you have done makes you the archetype for this sort of leadership. Whether it be hoodies, t-shirts or 4th quarter comebacks, your energy commands allegiance.”

The indispensable Twitter feed Prison Culture commented negatively about the hashtag, writing, “Go tell white athletes to show some solidarity on the matter of #TamirRice. Enough. This is a problem of WHITENESS & its deadliness.”

But the motivation for this initiative is precisely rooted in the belief that those in power – as well as the white mass of Cleveland sports fans – are blithely ignoring this injustice. The hope is that LeBron, with all of his fame, can puncture privilege, tear the blinders off of those who care more about a Cavs championship than a police murder of a child, and get people to “see” Tamir Rice.

If one agrees that white people need to confront the reality of this killing – and all the police violence that dots the country – consider that Tariq Toure alone has been able to put discussion of this debate on ESPN, on popular sports websites, on the Network News, and on sports radio; in other words, in front of white eyes and ears. Most of these commentators derided the call, defending LeBron like he is a fragile flower who might wither in the face of a hashtag. Let them bloviate. Millions of readers and listeners had to reckon with the death of Tamir Rice, amidst New Year’s college football bowl coverage, and see the face of a child the mainstream media and Cleveland politicians wanted to relegate to the holiday shadows.

Tariq Toure saw that the most powerful sports/politics moment of 2015 was the 69% black Missouri Tigers football team threatening to strike against racism on campus and bringing down a university president. That didn’t happen by accident. It happened because they were engaged by the movement and then their actions brought the crisis in Columbia, Missouri to the world. They risked their scholarships and their futures. But the risk is precisely what made it matter.

That’s the power of sports as a megaphone for issues that transcend the playing field. This hashtag comes from a place of struggle and desire for change. Are activists using LeBron and using sports to project their issue to a higher cultural plateau? Absolutely! Do people in power use sports all the time to advance nationalism, US militarism, sexism, and in the case of a certain football team, rank racism? You betchya, they do.

The lovers of LeBron will always defend him. The haters of Black Lives Matter will always find an excuse. But the people who want to see change should see athletes as potential and powerful allies. If we don’t engage them with the world outside the athletic bubble, then inside the bubble they shall remain.