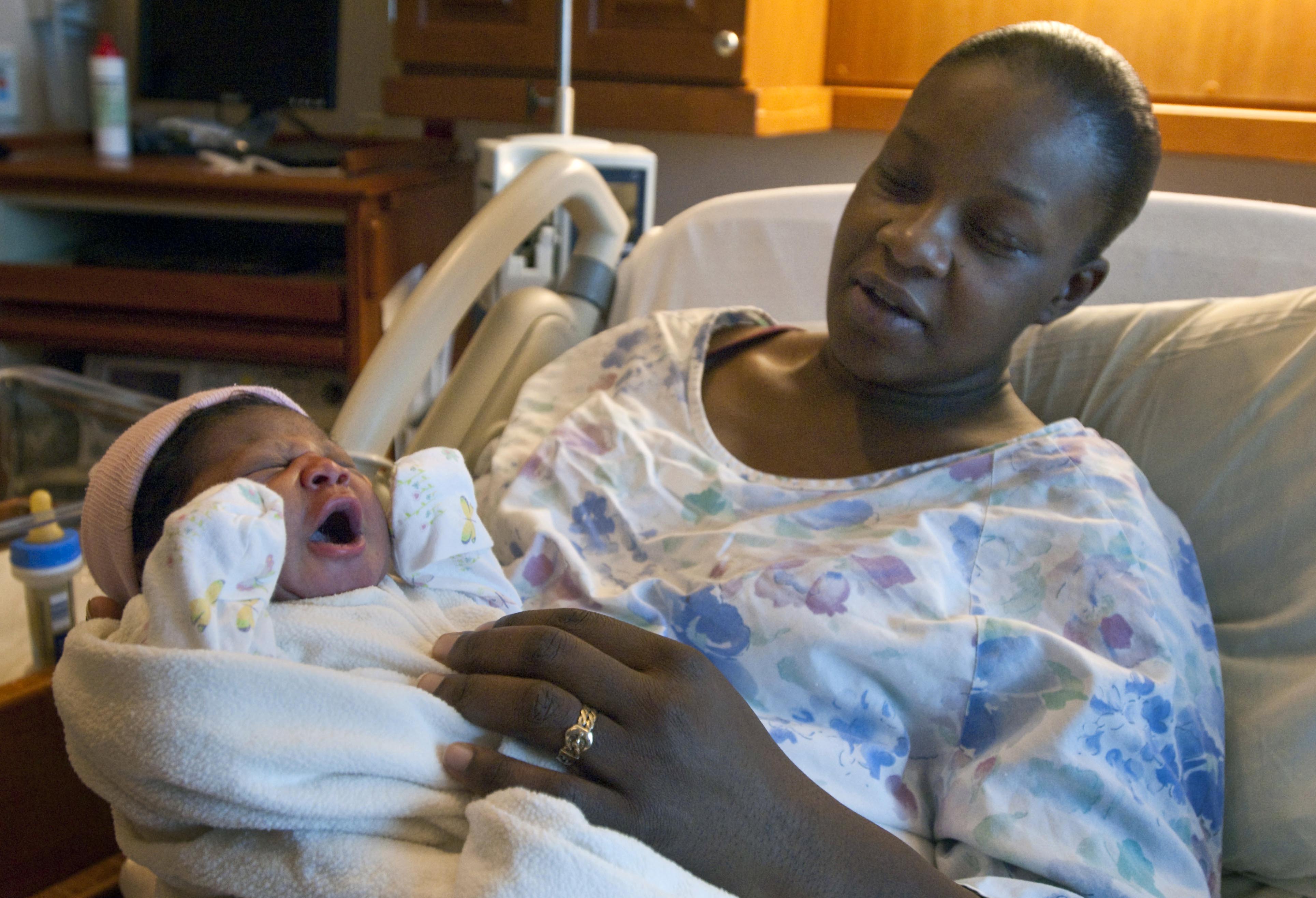 Newborn Jaliya yawns in the arms of her mother, Candice Mockobee, after a morning of interviews in the hospital. (AP Photo / The Evansville Courier & Press, Kyle Grantham)

Texans like to boast that their state is oversized on everything from job creation to cowboy hats, but its latest big news is nothing to be proud of. According to a just-released report from the journal Obstetrics and Gynecology, maternal mortality doubled in the state from 2011 to 2014. Unbelievably, Texas now has the highest rate of maternal mortality in the developed world. The United States as a whole is pretty shameful on that score, to be sure, with a rate that places it between Qatar and Bahrain. Moreover, the national rate has been rising in recent years—California is the only state that has managed to significantly lower maternal mortality. Even so, Texas is way out of line. What gives?

Opinion writers have been quick to point the finger at the state’s assault on birth control and abortion. In 2013, Texas passed stringent regulations that forced half of the state’s abortion clinics to close. Previously, in 2011, Texas had pursued its jihad against abortion by slashing its family-planning budget (which includes care for pregnant and postpartum women) by two-thirds in order to defund Planned Parenthood, despite the fact that its network of clinics was the single largest provider of reproductive-health care for low-income women. At least 53 clinics—many of them not affiliated with Planned Parenthood—closed; others scaled back their hours and services. What remained of the family-planning budget went to general-purpose community clinics and other health-care providers who struggled to fill the gap. As a result, fewer women were able to access long-acting contraception, and more women had unplanned or unwanted pregnancies—including women already in poor health, for whom pregnancy was not advisable. More women couldn’t obtain an abortion, lacked an entry point into prenatal care, or started that care later.

Even the state’s mammoth loss in the Supreme Court, which overturned its severe restrictions on abortion, has had little effect.

It’s certainly ironic that Texas legislators claimed to be closing clinics to protect women’s health while ignoring the real public-health crisis of mounting maternal mortality. But the full story is more complex—and even sadder. “The closure of abortion clinics isn’t related to this reported increase in maternal mortality, which predated it by two years,” said Daniel Grossman, a professor of reproductive sciences at the University of California, San Francisco, when we discussed the issue. He’s also the director of Advancing New Standards in Reproductive Health and an investigator for the Texas Policy Evaluation Project. “The family-planning cuts may have been a contributing factor,” Grossman continued—a second study, released in July by the Texas Maternal Mortality and Morbidity Task Force and Department of State Health Services, suggests that they were—“but there had to be something else going on.” One is the opioid epidemic: Overdosing is the second-biggest cause of maternal mortality in Texas. Another is racism: In Texas, the maternal-mortality rate for white women is in step with their pregnancy rate; for Hispanic women, it’s actually lower. But black women are 11.4 percent of all pregnant women in the state and a whopping 29 percent of those who die.

Before I started working on this column, I pictured maternal mortality as death during pregnancy or childbirth. In fact, the statistics include every form of death except non-pregnancy-related cancer and accidents for up to a year after the pregnancy’s end. (This would include deaths from abortion, but despite the concerns of Texas politicians, there seem to have been none of these.) Most Texas women who died post-pregnancy didn’t do so in the delivery room, but six weeks or more after childbirth. The three top causes: cardiac events, drug overdoses, and hypertension.

Some of the women who died may have gotten pregnant because their family-planning clinic closed, and a few may have died because they stayed pregnant when denied access to an abortion. But as all the experts I interviewed stressed, we don’t know enough to state that for sure. We do know that most of them died because they were low-income women who lacked good medical care. A lot of them were on Medicaid—and in Texas, that means extreme poverty: Texas is one of 19 states that have refused to expand Medicaid under the Affordable Care Act. If the women were eligible for the state’s emergency Medicaid program, their coverage ended 60 days after the birth. Help with drug abuse is scarce, as is mental-health care (suicide was the seventh leading cause of maternal mortality). “Women need pre-conception care and continuity of care,” said Katrina Anderson, an attorney at the Center for Reproductive Rights. “What they get is the opposite.”

Joe Potter, principal investigator at the Texas Policy Evaluation Project, said that while we don’t have enough data to explain the deaths yet, “the report is a wake-up call. Cutting the budget to grind these clinics to a close did considerable damage to the women’s health-care safety net.”

So is Texas woke now? Hardly. Even its mammoth loss in the Supreme Court, which overturned the state’s severe restrictions on abortion access, seems to have had little effect. Texas has just given $1.6 million in women’s health-care funding to Carol Everett, an anti-abortion activist who runs a chain of “crisis pregnancy centers.” Neither Everett nor her organization, the Heidi Group, has any experience providing medical services. Media Matters has compiled a long list of her wacky views, including that abortions are frequently performed on women who are not pregnant; that the disposal of fetal tissue could spread HIV or Ebola through the air or water supply; that abortion clinics routinely give women defective birth control to create more business; and that emergency contraception is “destructive to a woman’s reproductive system” and “a social experiment on children.”

As I write, the Texas Health and Human Services Commission is poised to pass a rule requiring women seeking abortion or who have a miscarriage to arrange for the burial or cremation of their fetus, no matter how early the termination. What’s a little maternal mortality compared to keeping Ebola out of the water supply?

Update, May 1, 2018: This month, the journal Obstetrics & Gynecology published an article that sought to measure more accurately the 2012 maternal mortality rate in Texas, which a previous article in the same journal found to have almost doubled from 2011 to 2014. Using an “enhanced method” to determine maternal mortality, which included review of medical records and hospital discharge data in addition to the standard method of consulting the cause-of-death code on the death certificate, the authors determined that there were 14.6 maternal deaths per 100,000 live births in Texas in 2012, as opposed to 38.4 per 100,000. The authors concluded that the 2012 maternal mortality ratio was “less than half that obtained using the standard method” and that “unintentional user error in reporting pregnancy status may be responsible.” The authors also note that their findings likely have national implications, as similar user error may be occurring in other states as well.