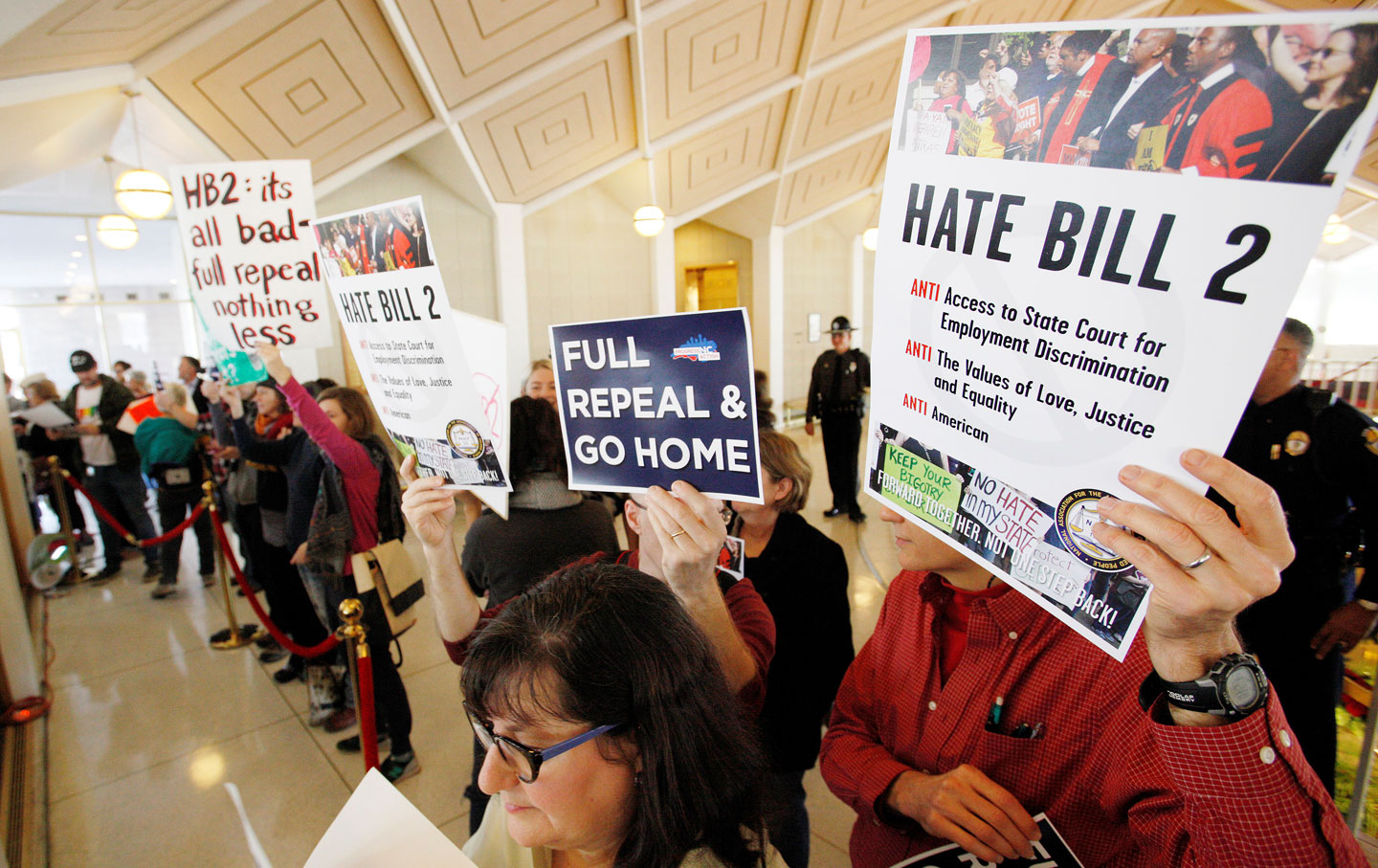 Opponents of North Carolina's HB2 law protest in the gallery above the state's House of Representatives chamber on December 21, 2016. (Reuters / Jonathan Drake)

On Thursday, the North Carolina General Assembly voted to pass HB 142, a deal struck by Republican legislative leaders and Democratic Governor Roy Cooper, who ran his campaign on a full repeal of HB 2, the discriminatory anti-trans and anti-worker bill passed a little over a year ago. In a joint statement released Wednesday night, Senate President Phil Berger and Speaker Tim Moore said they were “pleased this proposal protects bathroom safety and privacy,” while Cooper said it wasn’t a “perfect deal,” but it “begins to repair our reputation.”

After several of attempts, legislators were pushed by the NCAA’s Tuesday announcement that the state had two days to repeal HB 2 or face losing championship and tournament games through 2022. For enough legislators, the pitch worked this time. But make no mistake about it: Despite being framed as a “repeal,” the new policy is still very much discriminatory, and doesn’t grant anything close to fair and equal treatment under the law for transgender people.

While the deal did technically repeal HB 2—commonly known as the bathroom bill, it also did grave damage to civil rights. The new law prevents any state agencies—including local school boards—from creating their own rules allowing trans people to use the bathroom associated with their gender unless the rule is “in accordance” with a law passed by the General Assembly. Given the Republican supermajorities in both chambers of the Legislature, won with “illegal racial gerrymanders,” don’t expect that to happen anytime soon. Moreover, it put into place a four-year moratorium on creating or amending non-discrimination ordinances regulating public accommodations and “private employment practices”—i.e., living-wage ordinances.

Virtually no one liked the bill. On the right, the powerful social conservative interest group NC Values Coalition released a statement in the morning “encouraging lawmakers to stand strong” in support of HB 2. Although they were outnumbered, 33 House Republicans and 10 Senate conservatives ended up voting against the final bill.

The bill also drew the ire of municipal officials on the left. “#HB2 deal doesn’t ensure trans people have the right to use the restroom of their choice, doesn’t protect LGBTQ people from discrimination,” tweeted Durham City Councilwoman Jillian Johnson. “Some #HB2 nonsense is about to go down,” added Carrboro Alderman Damon Seils. “And it’s nothing to be pleased about.”

“We’re sending the message that NCAA basketball is more important than people’s lives like mine.”

But it was the LGBTQ community that was most adamantly against the bill. “We’re sending the message that NCAA basketball is more important than people’s lives like mine,” said Angela Bridgman, a transgender woman from nearby Wendell, told The Nation. “I supported Roy Cooper because I believed he had my back. And now he’s selling me out.”

The two openly LGBTQ members of the General Assembly—Representatives Cecil Brockman and Deb Butler—spoke out strongly against the bill. “There were no LGBT people at the table,” Brockman said on the House floor. “They were completely left out of the discussion, and when you’re talking about an issue that affects LGBT people, you would think you’d like to hear their opinion.”

“[The LGBTQ community] would rather suffer HB 2 than have this body, one more time, deny us the full and unfettered protection of the law,” Butler said.

But the Democratic leadership in the House and the Senate sided with the governor, as did a majority of both caucuses. Only six Senate Democrats out of 15 voted against the deal, while 15 House Democrats broke with 30 of their colleagues and did the same.

Senate Democratic leader Dan Blue said he was voting for the bill because of the “economic threat” posed by the continued presence of HB 2 in state law. His counterpart in the House, Representative Darren Jackson, compared the bill to HB 2 piece by piece, and said the bill was better for cities and transgender people than the previous law. “In no way,” he said, “is this bill a step backward from HB 2.”

But while activists were undoubtedly frustrated with Cooper, Candis Cox—a trans woman who is on the board of Equality NC and campaigned for Cooper last November—says she still thinks there’s a way forward with him. “I still believe overall that he is someone we can still work with and talk with him,” Cox said. “This is all speculation, but perhaps right now he’s having a defeatist moment, where he feels as though the only way we’re going to get anything done is he’s going to have to cave to the GOP.”

But Cox still isn’t happy about the deal Cooper cut. “My only message to him is ‘No. You are the executive of the state of North Carolina, you hold the highest office in this state,” she said. “So let’s ensure that you understand that.’”