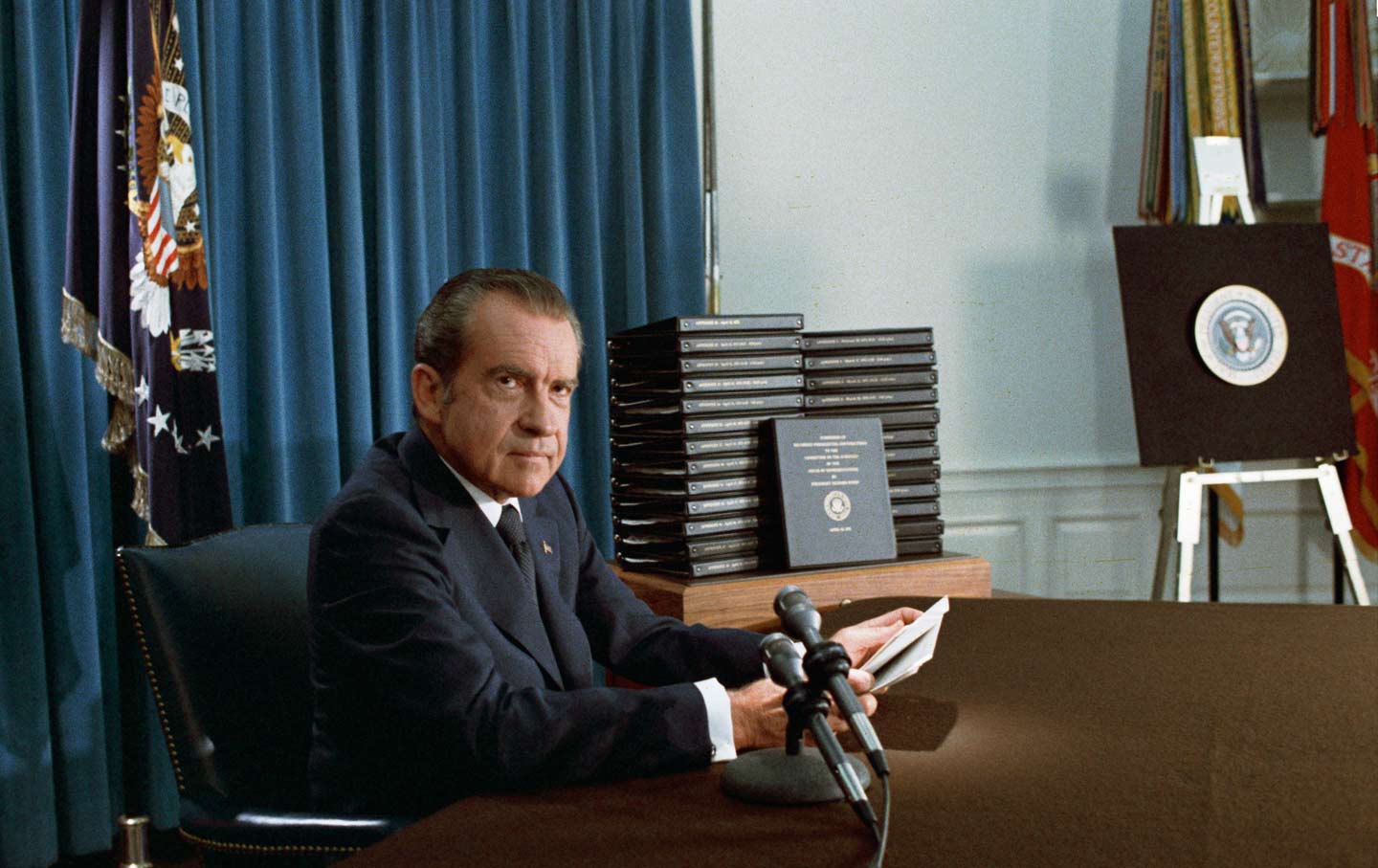 President Richard Nixon announces the release of edited transcripts of the Watergate tapes on April 29, 1974.

There was a chance, however small, the that Select Committee on Benghazi might actually yield some interesting answers about the invasion of Libya, which was conducted without congressional approval and created some pretty disastrous outcomes in subsequent years. Any hope officially evaporated Thursday, if it hadn’t already.

For nearly 11 hours, committee Republicans harassed and cajoled former secretary of state Hillary Clinton about everything from her relationship with Sidney Blumenthal to her private e-mail server to the Clinton Foundation, but never really focusing in on anything of import. This was to be expected from a committee that has sent out 30 press releases about Clinton since March, and five about any other topic.

Obviously a transparent, taxpayer-funded opposition research project launched by Republicans against a likely foe in the upcoming presidential election, the select committee was a joke. And Republicans aren’t done making a mockery of congressional inquiries: Next up is a select committee to investigate Planned Parenthood.

But it doesn’t have to be this way. Select committees and other broad congressional inquiries have historically been critical tools in getting answers and creating change when other avenues are impassable. Here’s a quick sketch of some past select committees and commissions that should be the actual model for how Congress uses its investigatory power.

Pecora Committee (1932–24): Officially called the Subcommittee on Senate Resolutions 84 and 234, this effort came to be known for its chief counsel, Ferdinand Pecora. After the great market crash of 1929, Americans had lost any faith in the financial system and weren’t buying back in. To restore some confidence, President Herbert Hoover asked Congress to investigate the stock market.

Pecora used the committee’s subpoena power to haul the country’s leading bankers in front of Congress, as millions of Americans who lost money in the crash followed the proceedings. A former district attorney, Pecora skillfully cross-examined the bankers and exposed their misconduct. (It was during these hearings that the term “bankster” was coined.) As the committee did its work, Congress passed serious financial reforms based in part on what Pecora was exposing, including the Glass-Steagall Act of 1933 and the Securities Exchange Act of 1934. This is an idea that should have been reprised following the 2008 financial collapse.

Watergate Committee (1973–74): Senator Ted Kennedy introduced a bill to create this inquiry amid the revelations about the break-ins at the Watergate Hotel in Washington. Officially known as the Select Committee on Presidential Campaign Activities, the hearings were televised on PBS and regularly beat out programming on other channels.

The obvious, proximate outcome of the inquiry were the impeachment proceedings and ultimate resignation of Richard Nixon, who was sued and subpoenaed by the committee for records that might relate to the break-in. But the hearings also produced substantive legislative recommendations, some of which were enacted as amendments to the Federal Election Campaign Act, including limits on campaign donations and expenditures. (Some of these provisions were struck down two years later in Buckley v. Valeo, however.)

But the committee also restored public confidence in large-scale congressional inquiries, which had been badly battered by the McCarthy hearings of the 1950s.

Church Committee (1975–76): These hearings infamously kicked off with Senator Frank Church holding up a CIA poison dart gun, which contained a shellfish toxin the agency had been ordered not to possess, but did anyway. The televised hearings probed abuses by the US intelligence community, and was spurred on by the investigative reporting of Seymour Hersh, who revealed in a series of stories that the CIA was purposely destabilizing foreign governments as well as surveilling American citizens in the homeland.

Over the course of many hearings and fourteen reports, the committee unearthed intelligence agency abuses like the illegal spying on Martin Luther King Jr. and the rampant wiretapping of J. Edgar Hoover. Aside from waking up Congress and the public to the unseen activities of the dark state, the committee’s discoveries lead to the 1978 Foreign Intelligence Surveillance Act.

Iran-Contra Committees (1987): After the Tower Commission, an independent committee created by Ronald Reagan, largely absolved the president for his role in the Iran/Contra affair, Congress launched its own effort to find out what happened. The House Select Committee to Investigate Covert Arms Transactions with Iran and the Senate Select Committee on Secret Military Assistance to Iran and the Nicaraguan Opposition held joint hearings that were watched by millions of Americans and came to a different conclusion: that the Reagan administration operated with “secrecy, deception and disdain for the law.”

The committee’s final report didn’t end up with the goods on Reagan, and blamed in part the destruction of documents by administration officials. But it also didn’t absolve Reagan, as the Tower Commission did—rather the investigation said Reagan’s involvement in Iran/Contra was the “central remaining question” of the affair.

Select Committee on Global Warming (2007–11): This committee deserves at least an honorable mention—it didn’t have the investigatory power nor historical impact of the aforementioned committees, but was nevertheless a serious attempt to wake Washington up to the looming threat of global warming.

Created by Nancy Pelosi when the Democrats took control of the House in 2006—and disbanded by Republicans when they regained control in 2011—the committee held 80 hearings and briefings on the threat of climate change. Its work was reflected in some legislation, including the 2009 stimulus package, which had substantial and still-underrated elements that boosted green energy production in the United States.

The committee’s final hoped that “Someday, our children and grandchildren will look back on the record of the Select Committee. That record will reflect a respectful and rigorous debate and an unprecedented understanding of the challenges before us. Whether or not they will see that this generation has taken the bold action required by these challenges remains to be seen.”