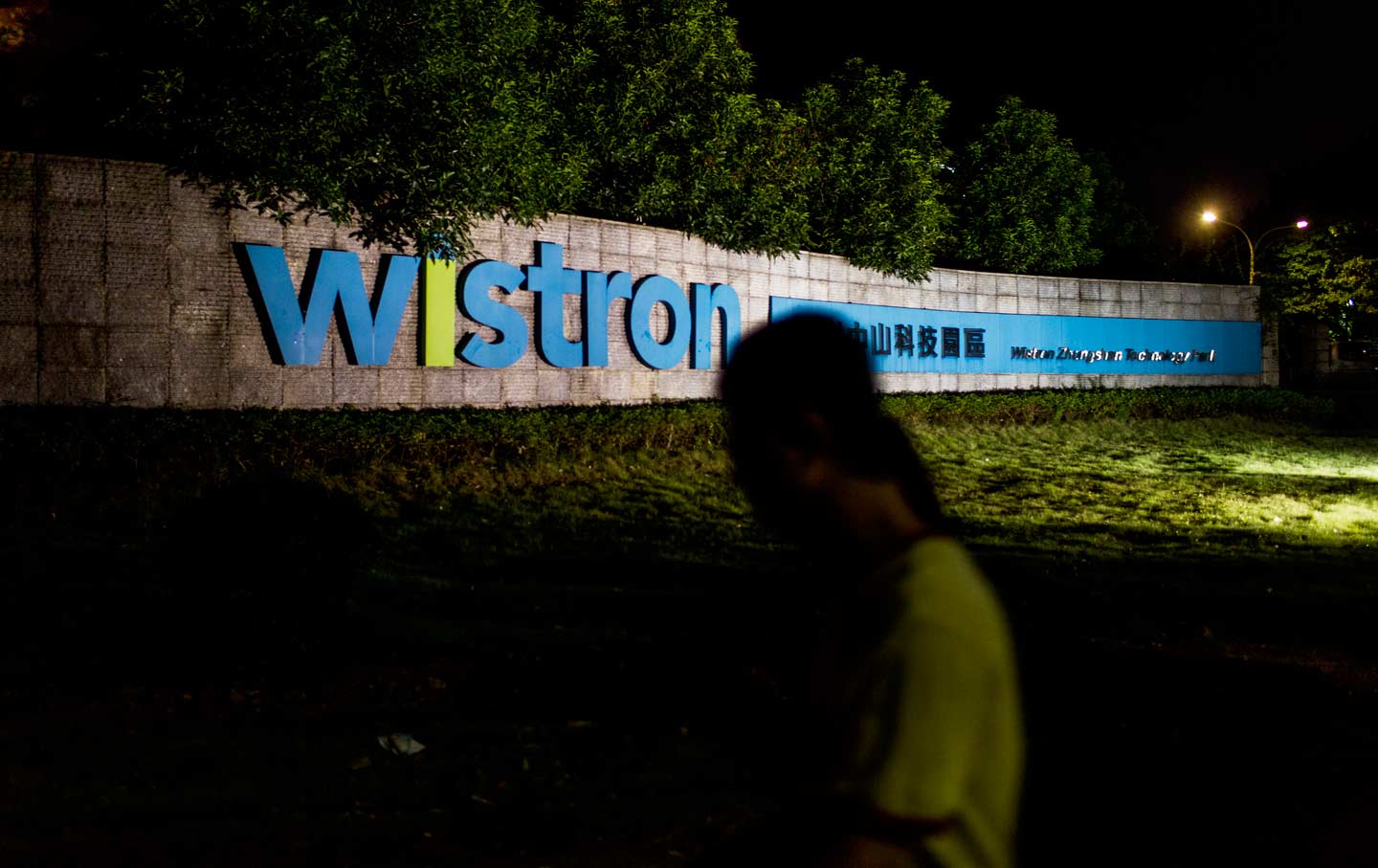 Chinese interns work late shifts at factories despite this being a violation of their internship agreements. (Uffe Weng / Danwatch)

“We are standing at the assembly line the whole day, doing the same task again and again. It has nothing to do with my education,” says Xu Min, a 19-year-old college student in Hubei, China. “None of us want to be here. We are all depressed, but we have no choice.… The work is exhausting.”

For ambitious young people worldwide, the internship offers an on-ramp to a corporate career through office grunt work. But whereas American interns “pay their dues” as coffee-making cubicle peons, Chinese interns serve as a different kind of cog in the “emerging economy’s” manufacturing machine. Xu Min’s internship program, according to investigators, sent her and about 300 fellow students to serve as cheap labor on the global electronics assembly line.

Drawing on field research and interviews with workers last summer, investigators concluded that an officially sanctioned pipeline of deregulated labor allows both schools and multinationals to benefit from the exploitation of young temp workers. Under pressure from their institutions and the approval of Western brands, “Thousands of Chinese students…work 10-12 hours a day, six days a week, for up to 5 months.” Their overtime—typically needed to cover basic living expenses—may amount to as much as 100 hours a month, far exceeding the regulatory limit of 36 hours per month. The investigated subcontractor, Taiwanese multinational Wistron—along with its multinational clients Lenovo, Dell, and HP—have acknowledged Danwatch’s concerns overall, but generally denied students were systematically forced to work.

A labor recruiting agent told Danwatch that Wistron’s Zhongshan factory held some 15,000 workers and “between 2,000 and 3,000 students,” with more due for arrival soon, and that they “have to work as regular workers, they also do overtime, but they are not supposed to work the night shift.”

But investigators found that many do work night shifts, and the system seems to allow employers to skirt other social-security mandates. Norma Josefa Martinez, author of the report, says via e-mail from Denmark that the gargantuan, controversial Apple supplier Foxconn has been known to employ some 150,000 interns and, according to academic researchers, may “save around 45 million Yuan (6.3 million euros) in a single month by not providing their 150,000 interns with welfare benefits and insurances.”

Education Ministry regulations mandate that internships be “directly relevant” to students’ academic programs. However—echoing common criticisms of internships in Western countries—students (typically not in tech-related fields) told researchers their duties were not only irrelevant but were potentially undermining their academic progress. Business student Zhu Wen told researchers: “The school sent us here, but I don’t learn anything that contributes to my studies in the assembly line. I can’t stand it here.”

Xu Wen, of Huanggang Normal University, told Danwatch that after students learned they were being sent for factory stints at Wistron shortly before summer started, “Many students protested, as we are accounting majors and want to do relevant internships. The school told us that if we refused, we would not get our diploma.”

The student preciariat’s complaints highlight structural economic problems facing China’s upward-striving youth. College is sold as a ticket into the middle class, but amid exploding wealth inequality, social frustration is roiling as students chafe against Beijing’s wall of elitism, which reserves the best jobs for children of the connected upper class.

While schools tell students “eating bitterness” through harsh work builds morale, they often feel powerless under Beijing’s paternalistic labor policies. Her research shows, Jimenez says, that many students just accepted that “that is just how things are and even though it is not fair, that is how the system is.”

This system could undermine labor standards for all, as factories’ intensifying use of intern labor apparently provides an alternative to better-regulated, higher-cost standard employees, according to Danwatch. As the labor recruiter explained matter-of-factly: “We are not hiring workers, because the student workers have arrived.”

The government recently announced plans to dramatically expand vocational programs—a seemingly well-intentioned policy that, without tighter oversight, could indirectly expand the trend of “student interns being used by businesses as a source of cheap and flexible labour,” according to Hong Kong–based advocacy group China Labour Bulletin.

Though the companies deny charges of forced labor, in statements to Danwatch both HP and Dell have acknowledged “gaps” in their supply chain oversight, and reported they had temporarily suspended their internship programs and “committed themselves to monitor Wistron Corporation internships programs more closely in the future.”

Perhaps the hope lies in the students themselves. Just as student-labor activism spawned global movements against sweatshops and other corporate abuses, today the Hong Kong-based student group SACOM is leading campaigns against tech-sector worker abuse on the mainland.

The sense of outrage trickles down the production line: As intern Li Xiaoying told researchers, “I’d rather work for free and learn than be here.”

Now transborder solidarity could reemerge in the tech space as students at opposite ends of the campus supply chain work toward labor and educational freedom.