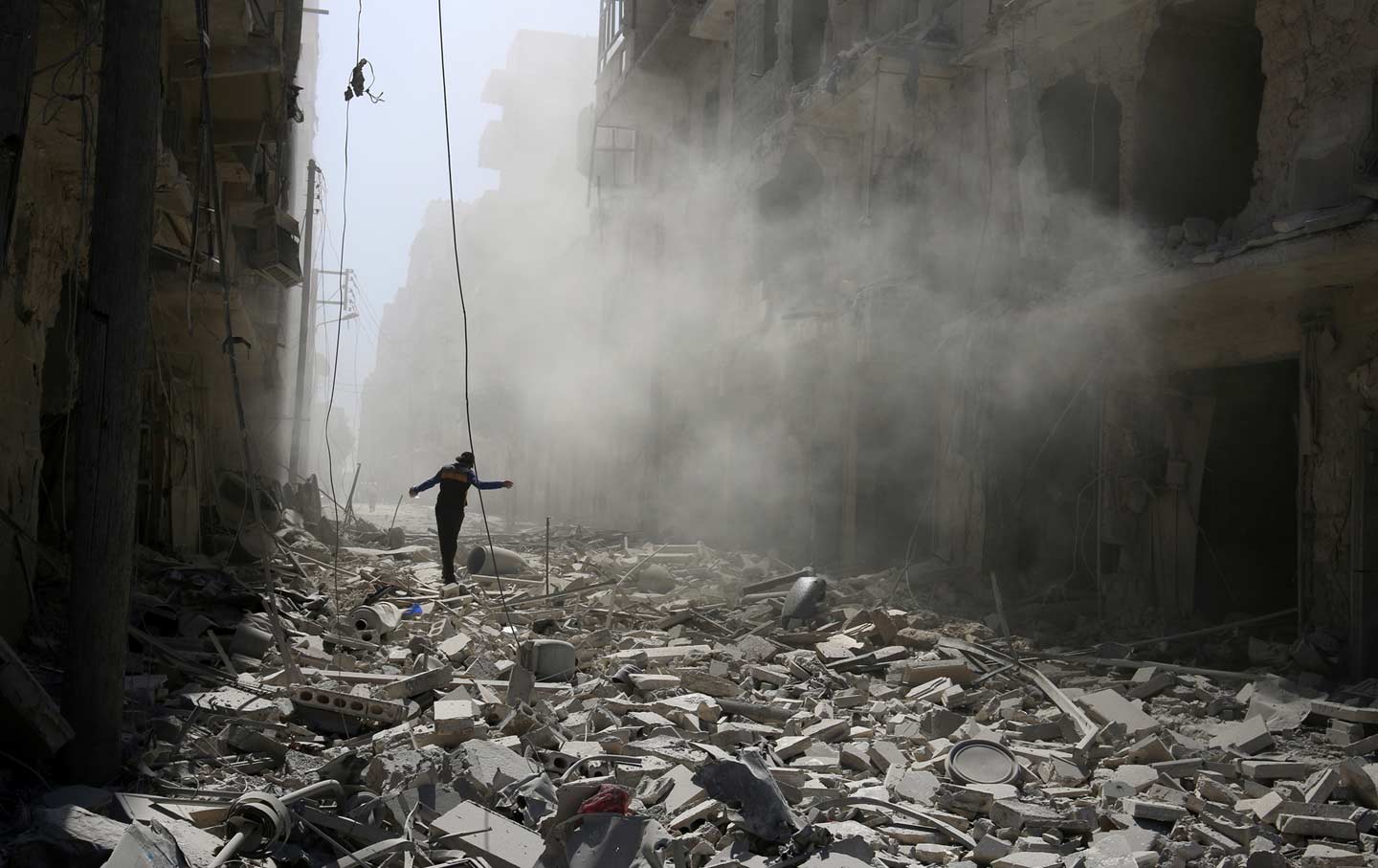 A man walks on the rubble of ruined buildings after an airstrike on a rebel-held area of Aleppo, Syria, September 25, 2016. (Reuters / Abdalrhman Ismail)

What are we to make of events in Syria now that Secretary of State Kerry’s latest (and very possibly last) attempt to establish a limited cease-fire has gone down too literally in flames? This is not the first such failure, of course: There have been eight previous attempts to stop the tragic violence and bring opposing sides to the negotiating table, beginning with two such efforts by the Arab League in late 2011. But this time, things are different. Questions are raised. It is possible the beginning of the end has just begun.

Kerry’s accord with Sergei Lavrov, his Russian counterpart, collapsed in spectacular fashion last week. The Syrian army and air force, supported by Russian bombers, instantly mounted a campaign against rebel-controlled East Aleppo that may be the fiercest yet conducted in this war. In the news reports it starts to resemble a minor-league blitzkrieg: A decisive finality appears to be the objective. Why this, why now? We reach a critical moment in this very critical post–Cold War crisis. So it is important to read into these latest events, even as our corporate media are not going to offer any help as we do.

We seek causality, in other words. The startling speed and ferocity of the new Syrian-Russian advance more or less shoves us up against the question. This is a display of force without restraint, so far as one can make out. It is also an assault on Kerry’s diplomatic efforts, we must not miss—a middle finger raised in anger. So if it is aggressive action, we must also understand it as reaction and then ask, “To what?”

The Obama administration, to the evident perplexity of the Russians, insisted on secrecy as the Kerry-Lavrov agreement was concluded September 9. We do not even know what is in it apart from an outline of responsibilities assigned to each side. As widely reported, the Russians were to restrict the Assad government’s bombing sorties, and their own, to designated targets—Islamic State and al-Nusra positions—and relief columns were to enjoy safe passage. The Americans were to require their “moderate rebels”—we stay with quotation marks, of course—to separate from those considered immoderate. If all went well, we were in for a breakthrough of potential consequence: Russian and American air-force officers were to strategize jointly against the Islamic State and al-Nusra, the two groups both sides agree are to be defeated.

Moscow has just told Washington, “If you insist on declaring Cold War II, we will wage it.”

There is plenty of blur—officially generated, per usual—as one tries to decipher what went so quickly and badly wrong as soon as the Kerry-Lavrov accord went into effect. At this point, it is a truism to say there are no innocents in this conflict other than its victims and the millions forced to flee. It does not appear as if either the Assad government or its battlefield adversaries took the deal seriously enough. Nothing new in this. But there is a new reality we must consider: Moscow appears to have given up on the Americans. Having long sought to “partner” with Washington—Russian officials use the term habitually—the Putin government has just given Americans a rough shove in full knowledge, apparently, of the potentially grave consequences in any number of contexts.

In my read, Moscow has just told Washington, “If you insist on declaring Cold War II, we will wage it.” If I am correct, this is big.

I see three reasons the Russians just went over the edge, if indeed they have:

Syrian Writers, Artists, and Journalists Speak Out Against US and Russian Policy

Syrian Writers, Artists, and Journalists Against US and Russian Policies in Syria

More to the point, the Kerry-Lavrov deal produced a moment of truth on the ideological side: Moderate Islamists favoring one or another form of tolerant democracy do not as a rule carry assault weapons, plain and simple. This fiction now explodes. Last week The Nation published an open letter signed by 157 prominent Syrian intellectuals—some, many, or most of them Muslim, all of them secular democrats. It should be read—in full knowledge that the US strategy in Syria has nothing to do with their cause apart from undermining it. The last thing Washington wants in the Arab world is democracy, as any history book can make plain.

This is part of the signatories’ point, indeed. As Moscow has finally grasped, there is no persuading the Americans to drop their obsession with advancing another coup in the cause of great-power rivalry. From here on out, we can forget about this iteration of the Reagan era’s “freedom fighter” narrative. And we can dismiss the Obama administration’s “strategic ambiguity” as to its objectives in Syria as so much rubbish. The Russians, please note, just did.

Here is Lt. Gen. Jeffrey Harrigan, who heads the Air Force’s central command, talking to reporters by video about the Kerry-Lavrov pact four days after it was announced: “I’m not saying yes or no. It would be premature to say that we’re going to jump right into it.” There we have it: A uniformed officer announces that the Pentagon may or may not follow an order issued by civilian authority, depending on what it thinks of things.

The Pentagon did its best to jawbone the accord into oblivion, which was its intent from the first.

Did your jaw drop on reading that? Mine hit the edge of my desk. It does not appear many Americans were much stirred, such is our soporific state, but I wager many Russians were. The American bombing of a Syrian military base days after Kerry-Lavrov went into effect dealt the deal a major blow, and we can debate all we like whether it was purposeful (as I suspect it was). Leave that aside and step back: The Pentagon did its best to jawbone the accord into oblivion, which was its intent from the first.

Russia’s objectives in Syria have changed not at all: It wants to destroy the Islamic State and al-Nusra and, with no great regard for Assad, preserve the central government so that a political settlement of one or another kind can be negotiated.

Clinton, a Russophobe from way back, threatens both goals.

Is it not barbaric to insist on turning a nation into nothing more than a theater of geopolitical competition?

Remember, Clinton continues to advocate a no-fly zone enforced by US bombers. “It’s important, too,” she said during the first primary debate a year ago, “that the United States make it very clear to Putin that it’s not acceptable for him to be in Syria creating more chaos, bombing people on behalf of Assad.” See the problems here? Russians act in Syria at the invitation of a sovereign government; American jets break international law every time they enter Syrian air space. Tragic as Syria is now, can Moscow plausibly argue—with causality in mind—that worse may otherwise await?

The infinitely righteous Samantha Power, Obama’s UN ambassador, calls the new Syrian-Russian campaign in Aleppo “barbarism.” It might be, although one takes the word of our hopelessly compromised press for very little. But why stop there? Is it not barbaric to insist on turning a nation into nothing more than a theater of geopolitical competition—an entire population jotted down as collateral damage?

This is not my first piece for The Nation: That lies 40 years’ back in the archives. It is my first as a foreign affairs columnist. I am delighted and honored to join so many professional colleagues and contributors. I hope my pieces measure up to the standards evident on the website daily and in the magazine every week.

In the past couple of decades—decisively since 2001, maybe—it has become impossible to think of foreign and domestic policies as separate universes. The world is too small now, interdependence too much with us, and—far from least—American foreign policy in too severe a crisis. What we think of our conduct abroad matters ever more. This is an excellent thing, even if it makes our minds the objects of relentless, Cold War–ish campaigns of mis- and disinformation as to what we do and why when acting among others. This we must not forget and must counter at every turn.

As the columns will make clear, I welcome the just-noted crisis in policy: Americans must pass through it to arrive at a more dignified and honorable idea of ourselves and our place in the world. Good enough this point is made in a magazine called The Nation. While remaining true to its mission as declared in 1865, it has also evolved to cast its gaze far more widely. It is my privilege to be part of this, and in so important a time.