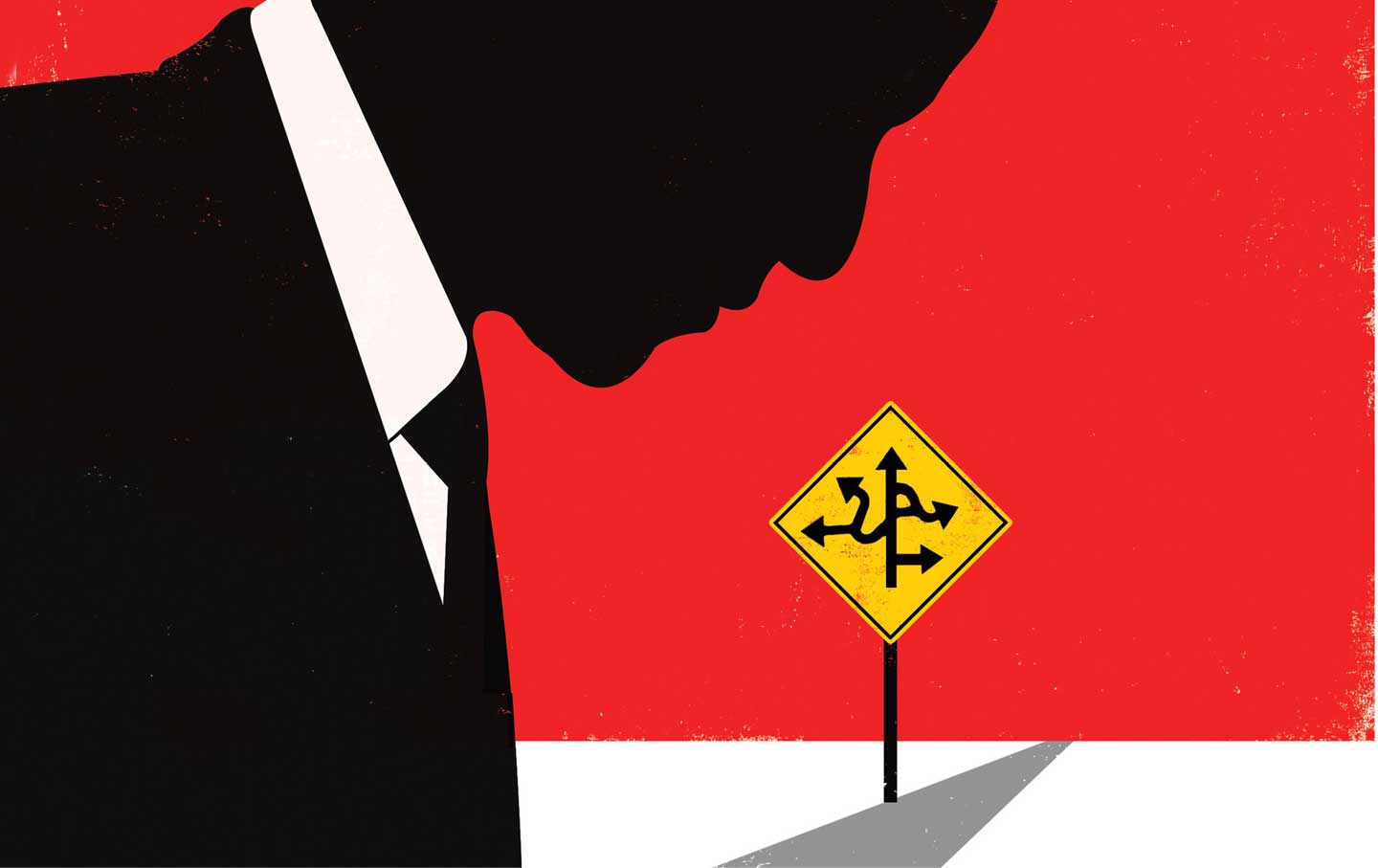 The last eight years have been an era of what I had thought future generations might look back on as an important political correction. For all that didn’t happen in retrospect, the era began with redemptive energy: There was hope, there was change, there was a rousing sense of public spirit and faith in public institutions. It had been a long slog under Bush the younger’s tenure, dominated as it was by the angry glare of Dick Cheney and the oddly cheerful grin of Donald Rumsfeld. But the election of 2008 changed all that. The new president, Barack Hussein Obama, was well-educated, well-spoken, congenial, and scandal-free; his wife was funny and whip-smart, his children beautiful and well-behaved. Their extended families were both racially diverse and ethnically inclusive. To so many, Obama’s presidency represented living proof of a newly forged “we”—an all-American identity that might now include African Americans at the highest levels of power. It was supposed to be the capstone to our national identity, the confirmation of our national mantra: With hard work and a good head, anyone can grow up to become president of these United States.

It was much too giddy a moment, of course. A kind of magical thinking overtook some, with ebullient declarations that we had achieved not only a historic milestone but had somehow been instantly transported to a “post-racial” nirvana. That giddiness tended to obscure or underestimate the deep resentments of another newly forged American identity—not merely angry conservatives or a dispossessed white working class, but the coordination of those who felt they were living under a state of siege, and who made race, gender, and ethnicity the scapegoats of their dispossession: radicalized elements within the Tea Party and a revitalized network of “alt-right” organizations. Those gathering storm clouds broke into the global consciousness with the election of Donald Trump. America toppled from the supposed heights of political correction to the dangerous depths of political reaction. I do not think that history is easily healed, but one can only hope. And the mere fact of the Obama presidency had given me hope that our nation might revisit and reconfigure some of its segregationist past by apprehending race as normal, even incidental, to the daily operations of the White House. I had hoped that the image of a figure as warm and mild-mannered, as polished and quick-thinking as Obama—a man who’d won the Nobel Peace Prize, who’d been president of the Harvard Law Review, who could sink a free throw, and who, with one hand, could catch a fly—might rework at least some of the stereotypes of the past. I had hoped that the insidious rhetorical habits of race might be reimagined, so that “the blacks” might not be spoken of as though many different people formed a single monolithic entity—and that individual names like “Willie Horton” would not be used to signify an imagined plurality of millions.

This was not to be. When Trayvon Martin was killed, the bubbling resentments used to justify his death at the hands of George Zimmerman presented an adjectival stroll down memory lane: Trayvon was alleged to be thuggish, brawny, brutish, bellicose, supernaturally strong, preternaturally predatory. That he was armed with nothing more than a packet of Skittles was quickly subsumed by the endlessly circulated logic of “better safe than sorry.” This habit of thought so overtook the racialized discourse of police/citizen encounters that there was no need for translation by the time of the 2016 presidential campaign, when Donald Trump Jr. tweeted an image of a huge container of Skittles. The legend read: “If I had a bowl of skittles and I told you just three would kill you. Would you take a handful?” This was a muddled reference to Trump Sr.’s rhetoric about the risks of allowing Syrian refugees into the country, but it could easily include all those demonized by his expansive executive nomination—from Muslims to migrants to Mexicans. And, of course, to Trayvon Martin.

This, to me, is the most poignant summary of both what has been gained in the Obama years and what has been run over by the Trumpian train wreck. Those Skittles ought to have become a cipher for the moment when America paused to consider our common ground and the tragedy of dividing it into turf claimed as “yours” but not mine. We might have listened to President Obama, who observed quietly that if he had a son, that son might look like Trayvon. We might have seen it as an invitation to look for the mother’s son in each of us, an opportunity to disaggregate our blinding fears of the black man and to consider the life of just this one young man: as someone who was beloved, as someone with his whole future ahead of him, and even as first son—a quintessentially all-American boy whose tragic death deserved investigation and respect.

Trayvon’s packet of Skittles should have become a potent symbol for the terrible cost of vigilantism and distorted racial fear.

But that never happened, and so the moment passed: Trayvon Martin became Eric Garner became Michael Brown became Walter Scott became Philando Castile became the groundswell of #BlackLives- Matter, and they all became “thugs.” This is the conflationary logic exploited by Rudolph Giuliani and by the Trump campaign’s assessment of Black Lives Matter as a “threat.” That packet of Skittles should have become a potent symbol for the terrible cost of vigilantism, a callous disregard for others, and distorted racial fear. It should have evoked forever afterward the duty of care and due process owed to any citizen—the instantiated civil and human right to be.

Instead, Trayvon Martin and George Zimmerman’s moment of individual encounter and disastrous instantaneous assessment has been used to reinforce a standard of guilty until proved innocent. And this logic now applies to the entire tribe of Skittles—if a single one is poisoned, you’d best avoid ’em all.

Of course, this logic requires an “us” and a “them,” a branded sort over there and a different, better kind to which we who know each other belong. The “we” enjoys the privilege of going about its daily business without interrogation or perpetual stop-and-frisk. The odds may be exactly the same, but chances are we will be just fine; chances are they are the devil incarnate.

The entire tribe of Skittles, in other words, enjoys no easy passage. Excluded from the communion of citizenship, its members struggle beneath the “hands up” ministrations of constant surveillance and public expiation. This is the poisonous logic of segregation, quarantine, border walls, and preemptive drone strikes. This is the dehumanizing reversal of “innocent until proved guilty.” This is the policeman’s and the vigilante’s logic: Shoot first, ask questions later. It’s the algorithmic filter at the border of a fractured brave new world, where every value of American jurisprudence is upturned on its head.

There’s an online resource called the OneLook Reverse Dictionary that promises to find “related concepts.” You type in a word or phrase, and the dictionary finds not synonyms or antonyms per se, but words or phrases that have been used in the same context and therefore capture a piece of its conceptual atmosphere. So I typed in “politically correct,” and a list of 999 words came up, including: “racist,” “nonracist,” “sexist,” “sissified,” “White Supremacy,” “feminazi,” “idiotic,” “enlightened,” “unthinking,” “pedantic,” “patronizing,” “intolerant,” “pinko,” “jingoistic,” “dogmatic,” “simplistic,” “prudish,” and “hypocritical.” From “heretic” to “hipster,” “Aristotle” to “ayatollah,” “Dixie- crat” to “Dreyfus”—indeed, it was during the Dreyfus affair that the word “intellectual” first emerged as an insult to be hurled. The tension between “intellectuals” and “anti-intellectuals” began with the passionate divisions between the Dreyfusards and those who refused to consider that a Jewish man may have been unjustly imprisoned.

Similarly, the epithetical excess that the OneLook Reverse Dictionary provides seems to capture all the dangerous contradictions of the last two decades of America’s so-called culture wars. The spectacular incoherence says much about the incoherence of our politics in general: The list is a jumble of affective resentments that swirl around notions of condescension and competitive insult-doggery. The litany of concepts swept into this definitional stew are not rooted in particular or nameable ideologies, but rather in a mood of unhappy divide.

And now we are drowning in that same vortex of polarized resentments. President Barack Hussein Obama was supposed to cure all that. But no single man could work such magic—that required the faith of the polity. He did not fail us; we as Americans have failed each other.