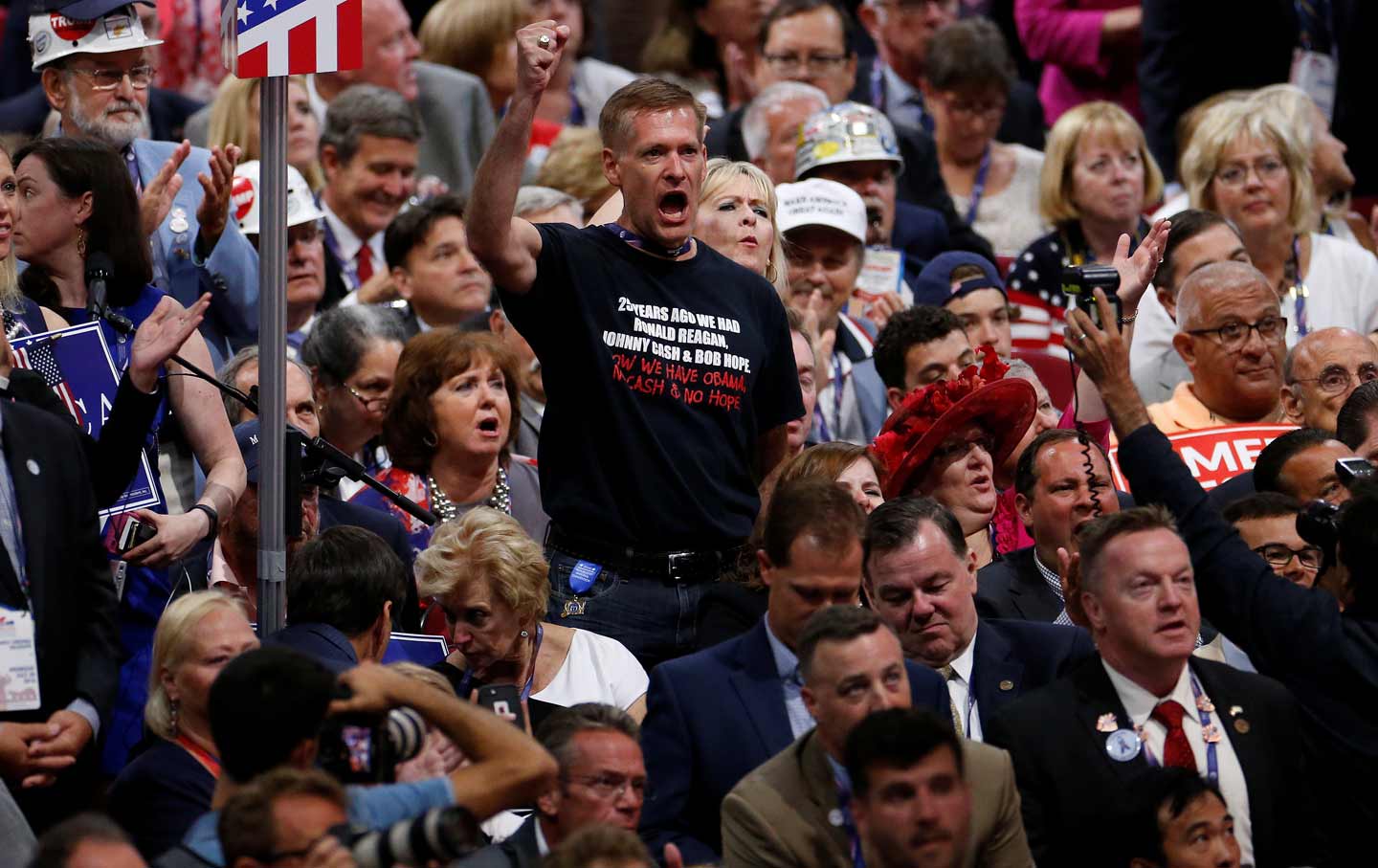 George W. Bush, a third-generation aristocrat with a family compound in Maine, had the ability to seem like a regular Joe Sixpack. Barack Obama has intelligence—and the capacity to make some people forget his race. Bill Clinton had irresistible charm—though at some point he must have stepped in a big pile of Kryptonite. Ronald Reagan could make anything sound plausible (including, for a brief period 30 years ago, the abolition of nuclear weapons). Hillary Clinton has inhuman persistence.

Donald Trump’s superpower is to be consistently underestimated. “When Trump got into the race, I just laughed,” Matt Throckmorton, a Ted Cruz delegate from Utah, told me. “I figured he’d be out by October. Then I thought he’d be out by November.”

He isn’t laughing any more. Last night I stood on the convention floor here in the middle of the Utah delegation—a state where, as Throckmorton pointed out, Cruz had won 70 percent of the vote—as their hero got booed off the stage. Cruz had just delivered one of the best speeches of the convention, positioning Republicans as the party of freedom and inclusion: “Christian or Jew, Muslim or atheist, gay or straight, the Bill of Rights protects the rights of all of us to live according to our conscience.” He’d attacked Clinton and Obama as devotees of Big Government, told the faithful, “Please, don’t stay home in November.” He’d even endorsed Trump’s fantasy of “a wall to keep us safe.” But it wasn’t good enough for Trump, who, irked by the chants of “Ted! Ted! Ted!” chose just that moment to enter the arena, pulling the delegates’ attention away from the podium just as Cruz was urging them to “vote for candidates up and down the ticket who you trust to defend our freedom.”

The conventional wisdom says this whole convention has been a disaster for Trump—a succession of self-inflicted message fails, from Melania Trump’s plagiarism on Day 1 (a story given extra legs by the campaign’s initial denials), to the heavy-handed manipulation of the rules on Day 2 to inflate Trump’s margin, to last night’s car-crash on the road to party unity. And Nate Silver agrees.

So why can’t I sleep at night? It’s not just the jet lag. Or FiveThirtyEight’s masterpiece of back-handed terror in a single headline: “Election Update: Clinton’s Lead Is As Safe As Kerry’s Was In 2004.” Talk about non-reassuring reassurances!

Actually, I think my insomnia stems from my bedside reading: a thick, heavily annotated work of academic sociology first published in 1982 titled Who Voted for Hitler? In its pages, author Richard F. Hamilton takes on the conventional view of the Nazi Party’s rise to power—that Hitler’s electoral success stemmed from a “panic in the middle class” brought on by the depression and the threat of “economic marginality”—and reduces it to smithereens. “Sometimes the facts that everyone knows prove to be the least known,” he writes.

Instead, Hamilton shows how all of Germany’s traditional parties “had taken…directions that made them unattractive to important segments of the electorate.” But where previous historians credited “the fear that dominates a social group which has only just risen above the level of manual laborer”—the quote is from Mein Kampf­—for Hitler’s appeal, which they assumed was chiefly to lower-middle-class and marginalized voters, by carefully analyzing vote counts and mapping the results against German census data, Hamilton shows that the Nazis’ actual base of support lay among the better off, with their share of the vote rising with income. By themselves, the rich and the upper-middle classes in Weimar Germany were not numerous enough to win an election. Hitler also drew considerable support from rural and small-town voters, from young people drawn into politics by the Nazis’ command of political theater—and from older voters who had dropped off the rolls until the Nazis gave them a chance to vote against a political system they viewed as illegitimate and corrupt.

I was particularly haunted by Hamilton’s answer to the question: “What does a Conservative voter do when his first choice candidate is removed from the race?” The Nazis, after all, never won a majority. Indeed, in the last two free elections held in Germany, the party’s share of the vote actually declined, from 37.3 per cent in July 1932 to 33.1 per cent that November. (The Socialist share also went down, from 21.6 to 20.4 per cent, while the Communists increased their vote from 14.3 to 16.9 per cent). It was the failure of the left to unify—and the moral collapse of German conservatives who thought they could “control” Hitler—that opened the door to the Nazis. And the terror in the wake of the Reichstag fire screened their seizure of state power. “Almost all of [the] Conservative support,” Hamilton writes, “went to an extreme candidate, to Adolf Hitler.”

To begin with the obvious: Donald Trump is not Adolf Hitler. I first interviewed Trump in the early ’80s, when I was writing a profile of Sandy Lindenbaum, the real-estate lawyer who’d steered Trump’s first Manhattan project, the former Commodore Hotel, through New York’s labyrinthine zoning process. (Lindenbaum’s father, Abraham “Bunny” Lindenbaum had been chair of the city Planning Commission—and Fred Trump’s political “fixer.”) And I am certain that Trump himself is not a Jew-hater.

I’m also aware of the lazy tendency on the left to reach for fascist analogies whenever we disagree with someone. But I’ve seen the brilliant stagecraft of Trump rallies in Iowa, and the thrilling procession of state troopers, boots gleaming and sirens blaring, that announced Trump’s entry into the Sun Dome in Tampa. For the past two nights I’ve watched as Trump loyalists in yellow baseball caps shouted down the opposition inside the Quicken Loans arena. And for the past three days I’ve seen them whip up the crowd with cries of “Lock her up!”—a chant that not only tars Clinton with the sticky mud of illegitimacy, licensing resistance to her presidency “by any means necessary,” but also blows the dam on a vast reservoir of pent-up misogyny.

So I tracked down Richard Hamilton—who, as it turns out, is now an emeritus professor at Ohio State, about 140 miles from here, and still as contrarian as ever. “I’ve been surprised at the lack of information in major news sources—including The New York Times—about where Trump’s support comes from. Everyone blames the economy, and focuses on the lower middle class. But there’s no data.”

As for my analogy, he gave it short shrift. “The Nazis were an incredibly well-organized party. They planned everything meticulously—training their speakers in how best to deliver the party’s message. Trump seems to have no plan, and no grassroots activity.”

Which should have made it easier to sleep. Only I realized that, like me, the good professor was a member of a generation that got its information primarily from print, supplemented by “major news sources.”

That world is still here in Cleveland; my Nation convention credential bears the picturesque label “periodical press.” But as I left the arena last night, a friend pointed out the huge neon sign above CNN’s convention headquarters. And as we made our way to a lavish Washington Post afterparty—thank you, Jeff Bezos, for a very tasty dirty vodka martini—we walked out past the Facebook “lounge” and the MSNBC stage.

Earlier in the day, I’d run into Winnie Wong—one of the founders of People for Bernie here for the demonstrations. “I’m definitely not ‘Bernie-or-bust’,” she told me. And she was worried. “Take a look at Trump’s Facebook page. It’s really well done. And their engagement levels are incredible.”

Wong’s speaking style can be Delphic—but I left her pretty sure she thought Trump might actually win. And though data analytics are not my strong point, when I took her advice I couldn’t help but notice that, while Clinton’s Facebook page had 106,000 new likes this week (up 24 percent from the week before), Trump’s had over 328,000 (up 61.2 percent). Of course that could have just been a convention bump. But Trump also had nearly 9.5 million “likes”—twice as many as Clinton.

As I’ve written before, Facebook likes won’t get you elected. And it’s possible that the constant air of menace in Trump’s speeches and rallies is just an accident—or a figment of journalists’ fevered imaginings. Though it’s striking how many conservative journalists notice it, too. It’s even possible—maybe even likely—that the wheels will come off the Trump juggernaut some time between now and November.

The Cruz people clearly think so. “It’s like Reagan in ’76,” Gina Blanchard-Reed told me last night. An anti-abortion activist from Washington State (she wore a pendant with the Hebrew word “Chai”—meaning life) and a member of the rules committee, she told me she was looking forward to Cruz running and winning in 2020.

“That assumes Trump loses,” I said. “Anything is possible,” she smiled. But then she may not know about Trump’s superpower.

Today’s papers tell me that what I saw last night was the wake for a Republican victory. Today’s headlines say that Trump’s remarks on NATO yesterday—though you could have missed it, thanks to Ted Cruz, Trump pulled the legs off the Atlantic alliance—“freaked out” our allies. And all of my friends here in the press corps agree this convention has been “a shitshow”—or “a dumpster fire” from start to finish.

So please tell me, doc. How come I still can’t sleep?