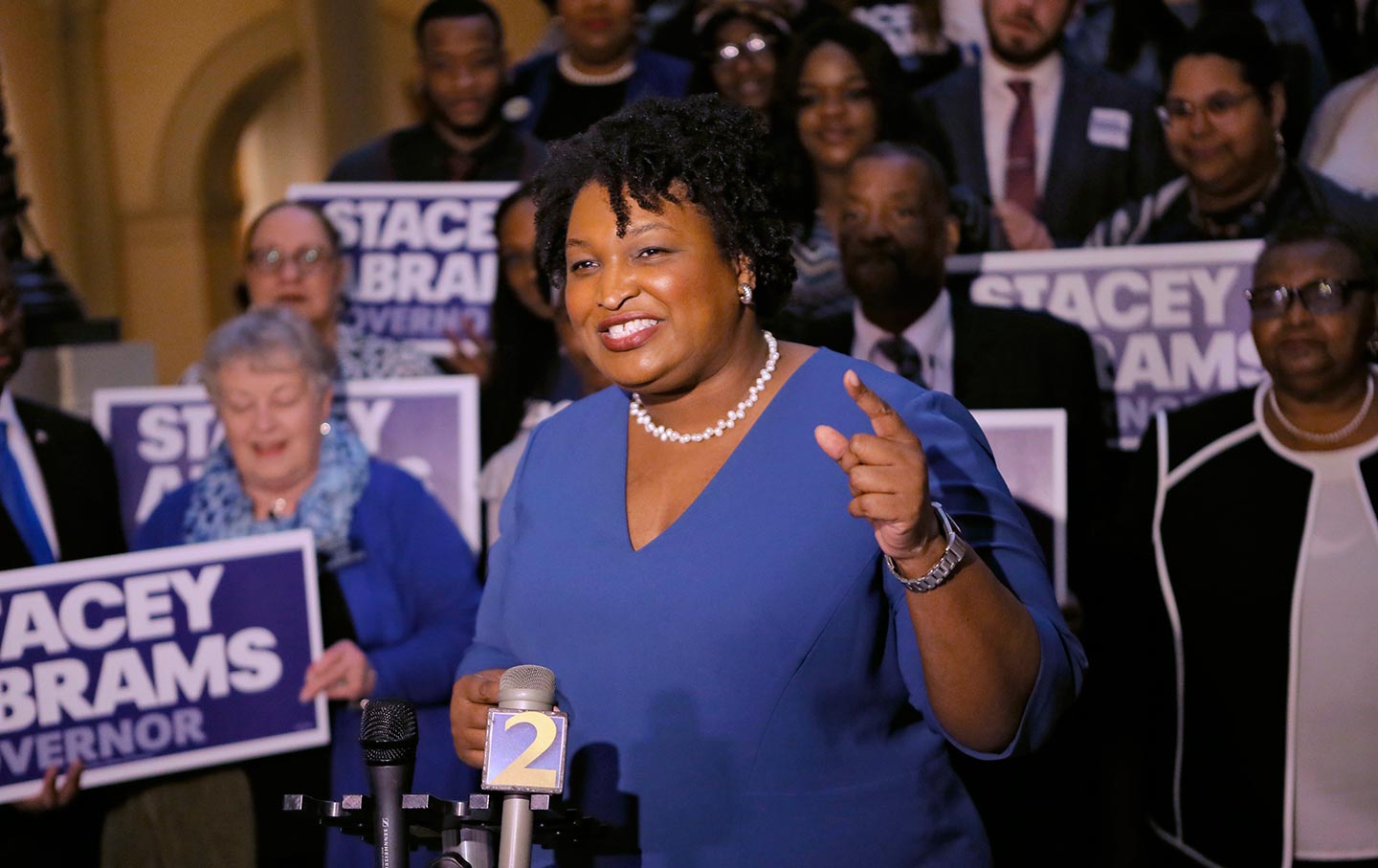 Stacey Abrams holds a news conference in Atlanta to announce she has qualified to run for governor. (Bob Andres / Atlanta Journal-Constitution via AP)

“The Rainbow Coalition is like a quilt—many patches, many pieces, many colors, bound by a common thread.” I was in Atlanta, Georgia, at the 1988 Democratic National Convention listening to Jesse Jackson describe his vision for how a multiracial and explicitly progressive coalition of people of color and progressive whites could lead Democrats to victory across the country. Although Jackson’s bid for the nomination fell short, the surprising success of his candidacy—he won 11 contests and nearly tripled his delegate total from 1984—revealed the potential of a campaign rooted in the country’s demographic revolution.

Last night, Stacey Abrams took a big step towards fulfilling that potential in the South by winning the Georgia gubernatorial Democratic nomination. The implications of her win for progressive politics and the future of the country are revolutionary in terms of political strategy and approach.

What Jackson foreshadowed in 1988, Barack Obama accomplished in 2008 and again in 2012, when he won reelection despite garnering 5 million fewer white votes than he had secured in 2008. In the wake of the 2016 election, however, many Democrats have lost their nerve, and, in too many cases, lost their minds, allocating millions of dollars to the fool’s errand of securing support from the very voters who hated our first black president and everything he represented. The significance of Abrams’s candidacy is that she has stayed the course, and in doing so provided empirical evidence about how to win in a highly polarized, racially charged political environment.

Georgia has historically been a conservative state, because there were always too few people of color, and too few progressive whites, to sway statewide elections. That is no longer the case. In the 30 years since Democrats gathered in Atlanta for its national convention, the state’s population has grown increasingly racially diverse to the point where people of color are nearly a majority (47 percent) of the state’s population and 40 percent of all eligible voters. 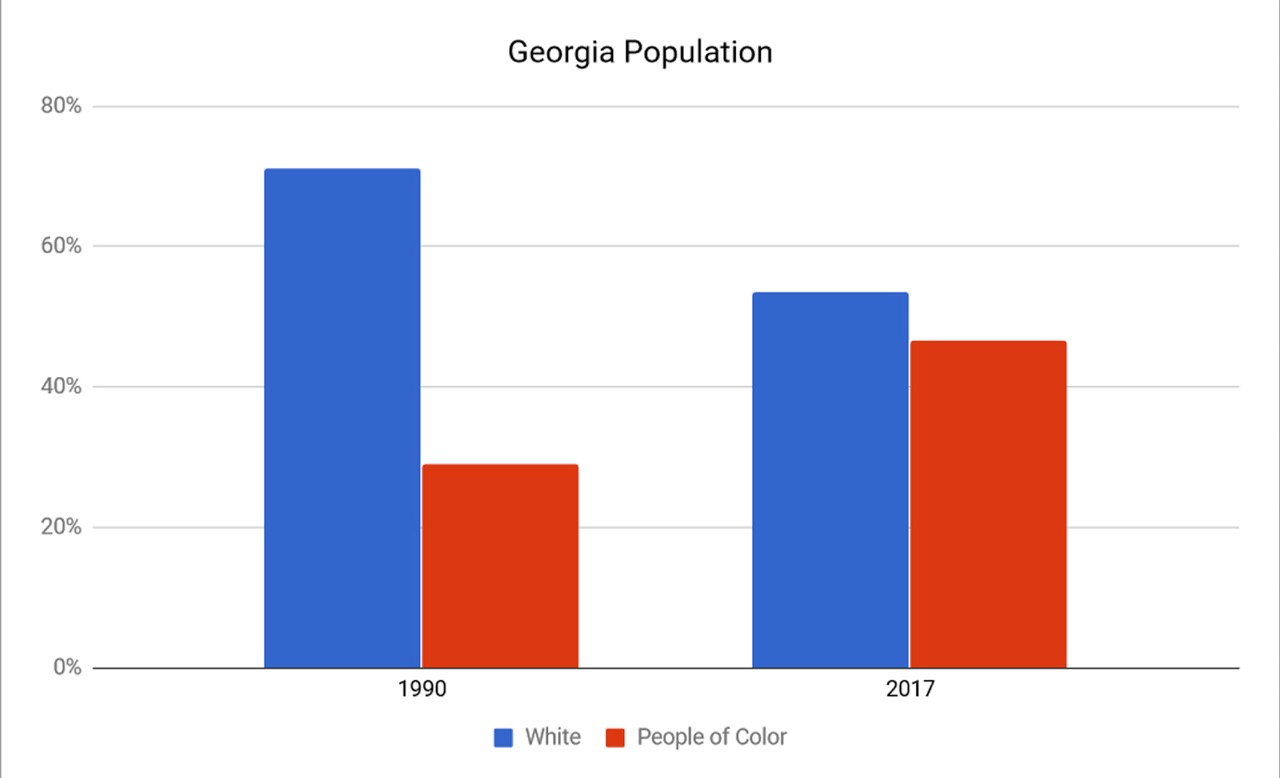 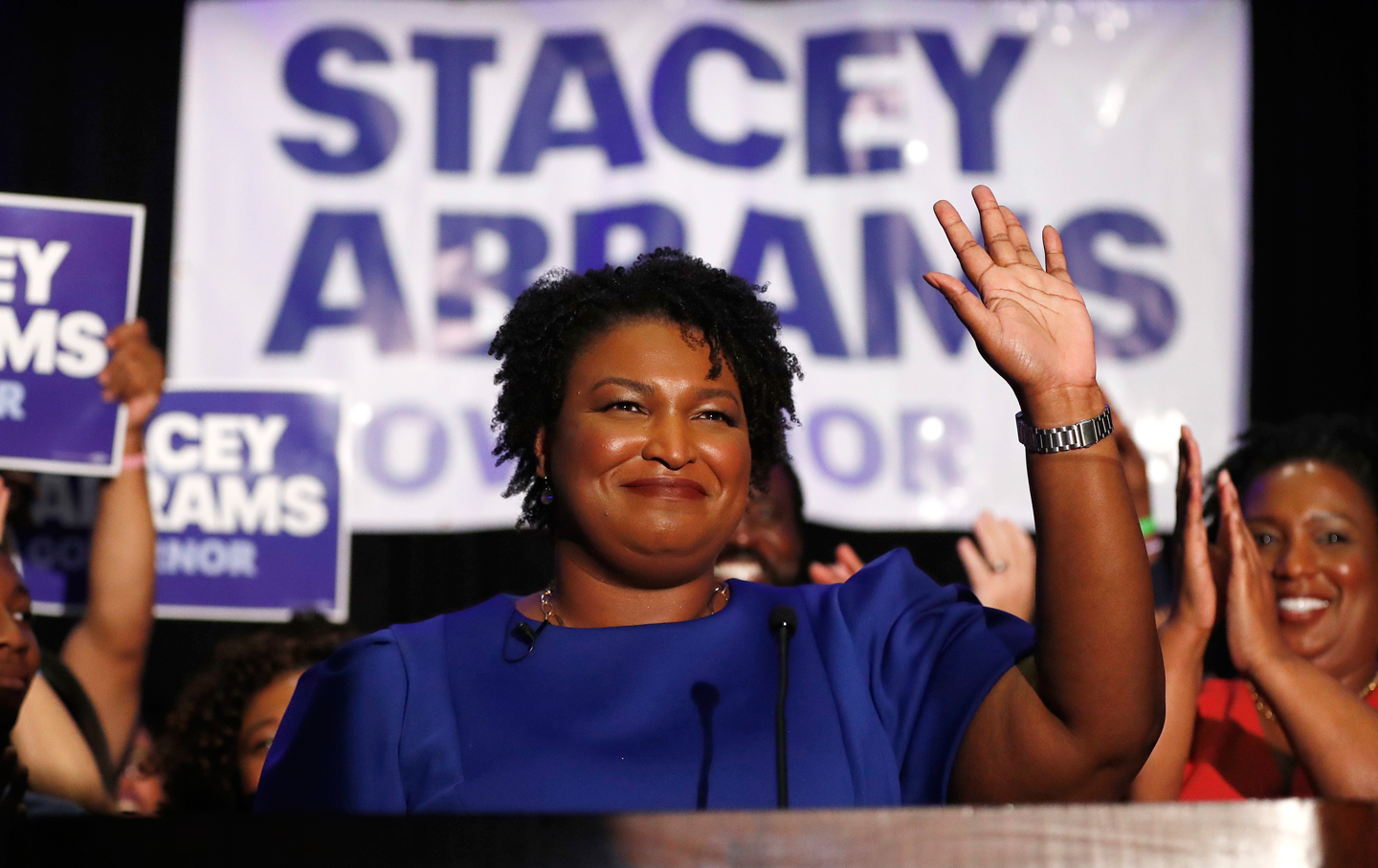 Despite this demographic transformation, Democrats in Georgia consistently lose by an average of 230,000 votes. The strategic challenge is how to close that gap. Despite the proven success of the Obama model, conventional wisdom still maintains that Democrats can win larger shares of the white vote if they just increase their empathy for the anxieties of moderate white voters while decreasing the volume at which they champion racial justice. For example, Abrams’s opponent, State Representative Stacey Evans, based her candidacy on the belief that she could use the fact that she grew up in a trailer park to win more support from white, working-class voters than prior Democratic candidates could.

All of the empirical evidence, however, shows that there is a ceiling on Democratic support from white voters. Just four years ago, children of two iconic Democratic families—Jimmy Carter’s grandson Jason Carter and former senator Sam Nunn’s daughter Michelle Nunn—made statewide bids that sought to attract greater white support. Both of them ran into the ceiling of white support, garnering the same 23 percent of whites that supported Obama in 2008 and Democratic gubernatorial nominee Jason Carter in 2014. In 2016, Hillary Clinton captured only 21 percent of the white vote.

Recognizing that the definition of insanity is doing the same thing over and over and expecting different results, Abrams chose a sounder strategy, backed up by mathematical data and aligned with population trends. In the last gubernatorial election, there were 1.5 million eligible people of color who didn’t cast ballots. It’s that pool of voters that Abrams is focused on to close the gap. About 80 percent of Georgians of color vote Democratic, the return on investment from mobilizing those voters is well worth the effort. And last night’s results proved the success of the strategy. If Evans’ efforts to woo whites couldn’t even garner enough Democratic support to prevail in a primary election, how did she expect to win in the general election?

Equally important as which voters to target is the question of how to attract that support. What Abrams is proving is that the way to increase voter turnout is by inspiring progressives, not coddling moderates and conservatives. Towards that end, she has unapologetically championed progressive causes that many Democrats continue to tiptoe away from. While consultants propound anachronistic notions of distancing candidates from “special interest” groups and “identity politics,” Abrams unequivocally embraced the whole litany of constituencies and causes that comprise the stripes of the modern-day rainbow coalition. She publicly and repeatedly expressed solidarity with and welcomed support from LGBTQ groups, labor unions, pro-choice groups, and gun-control advocates. She even explicitly condemned white-supremacist Confederate monuments.

In addition to the obvious upside in increasing turnout of voters of color, Abrams is showing that she knows that there are more progressive whites than many people realize. Especially in light of the resistance to Trump, Democratic voter turnout is up in previously conservative-voting congressional districts, and those reenergized progressive whites can help pick up crucial seats in Georgia, as well as help capture the governor’s mansion.

Smart investors look at trends, where things are going, not where they were. The plain truth of the matter is that every single day, America—and Georgia—get browner by the hour. Nationally, every single day, 7,000 more people of color are added to the population, while the net growth of whites is just 1,000 people (that’s births minus deaths plus legal immigration (which shows why Trump is obsessed with immigration).

It will cost about $10 million to mobilize the 230,000 previously uninspired voters of color required to close the gap in Georgia. The question and the challenge for the progressive movement is will they put their money where their mouth is? Progressives nationally moved upwards of $40 million to Elizabeth Warren’s 2012 Senate campaign and Wendy Davis’s Texas gubernatorial bid in 2014. Will there be similar enthusiasm and support for Abrams? If so, we can make history and fulfill the promise of what Georgia native Martin Luther King Jr. predicted when he said, “Give us the ballot, and we will transform the South.” In addition, we can make history by electing Abrams as our nation’s first-ever black woman governor.

I was blessed to be in Georgia in 1988 when Jesse Jackson stood a few miles from Martin Luther King Jr.’s grave site, joined hands with civil-rights icon Rosa Parks, and summoned Democrats to embrace the multiracial coalition for which so many people had struggled and sacrificed. We are all similarly blessed to witness Stacey Abrams break down barriers and blaze trails. Now it’s up to the progressive movement to stand with her and transform politics in this country.