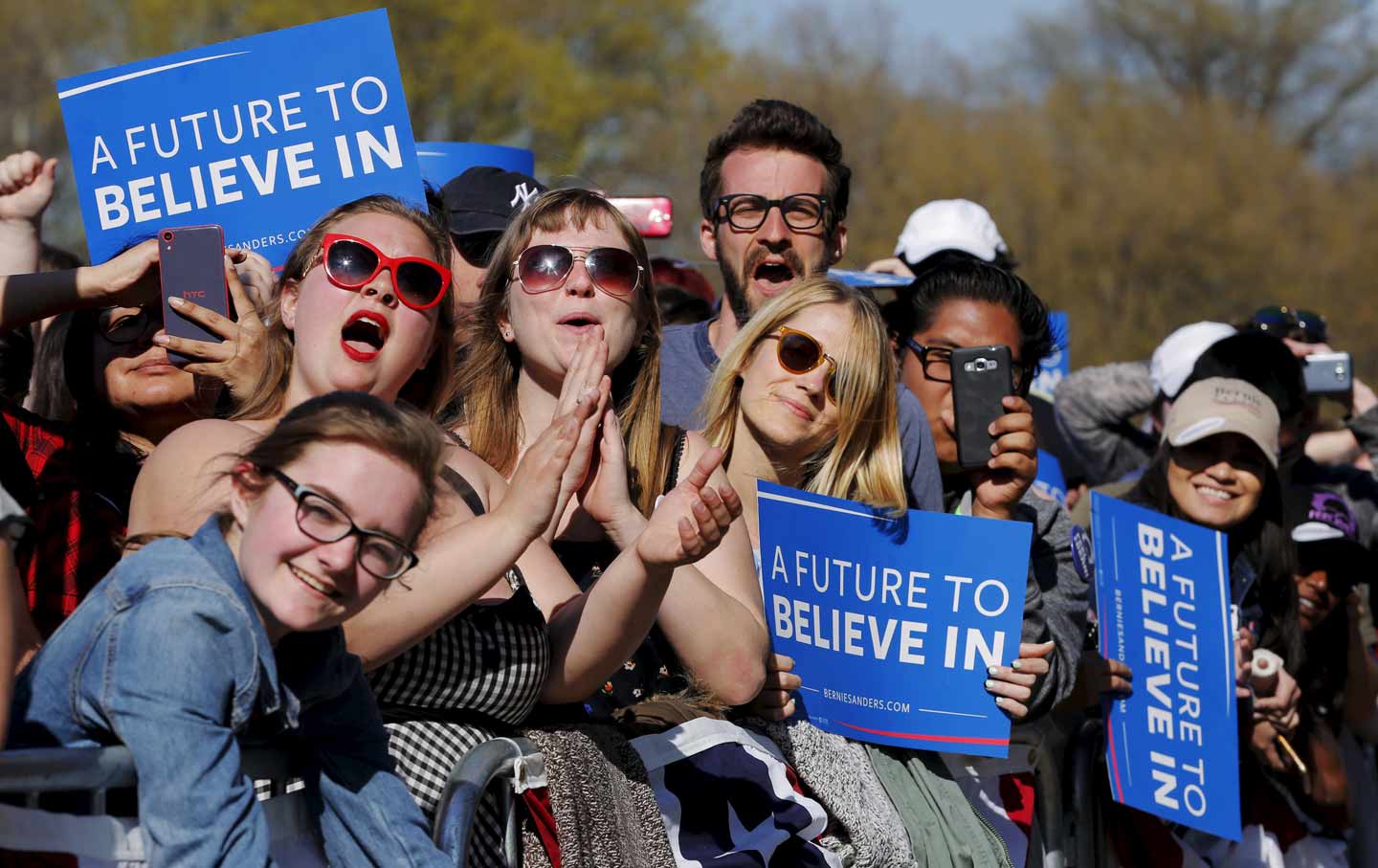 In the weeks since Hillary Clinton conceded the presidency to Donald Trump, people in every state of the Union have rapidly progressed from asking themselves, “How could it happen here?” to “What do we do now?”1

One of the greatest lessons from the Bernie Sanders presidential campaign was that a relatively tiny number of staff using fairly basic technology can unleash hundreds of thousands of volunteers to do serious work to advance a nationwide movement. There is no reason this energy shouldn’t continue to grow. Passionate, moral, and urgent opposition to Trumpism could represent the greatest opportunity for mass participation in politics since the antiwar movement of a half-century ago.2

But in order to turn the widespread grassroots readiness for action into a mass power movement, progressives will have to overturn the orthodoxy that limits the size of our campaigns to numbers that can be supervised by paid staff. Instead, we must embrace one of the new rules of organizing that was crucial to scaling volunteer leadership in the Sanders campaign: The revolution will not be staffed.3

It’s clear that the more paid staff that progressive organizations and campaigns have hired over the last few decades, the fewer volunteers have been engaged, and the more power we’ve lost. Yet progressives continue to equate staff headcount with power. These days, our challenges are so big that really making change will require a movement so massive we could never afford to pay all the leaders needed for it to succeed.4

While working on the Sanders campaign, we experienced firsthand how much volunteer leaders are capable of when the right people are given the right tools, responsibility, authority, and accountability—and when they have a major, meaningful mission like helping to elect a progressive to the presidency (or, more immediately, leading the opposition to Trumpism).5

We were part of the Sanders campaign’s “distributed organizing” team, the group responsible for organizing supporters in the states and regions where no paid staff were present on the ground. In the early months of the primary while the campaign focused nearly all of its paid staff in the first four caucuses and primaries, our small team of go-for-broke irregulars were tasked with organizing hundreds of thousands of supporters in the states that wouldn’t have field offices for months to come, if ever.6

Immediately, we began putting volunteer leaders into positions of power over fairly large chunks of the work our team was tasked with. What we learned over the course of the primary was that people are just waiting to be asked to do something big to win something big. Three or four part-time, passionate, and committed volunteers can in many cases do the work of one full-time staff member. Moreover, volunteers bring unique talents, life experiences, and connections to their communities that are usually unmatched by a field organizer or nonprofit manager.7

On the Sanders campaign, we did this by asking not who wanted to lead, but who was ready to get to work. Then we gathered people together on conference calls or in in-person meetings, listened to who seemed to be the most engaged and qualified, and rolled out both rinse-and-repeat tasks and more complex management challenges that volunteers could choose to take responsibility for.8

During the Democratic primary, we had hundreds of thousands of Americans eager get to work to elect Bernie Sanders. Now that Trump is headed for the White House, there are millions of people looking for somewhere to channel their energies. They are ready to fight back as members of a determined opposition, and to help build up a new alternative to the failed neoliberal consensus that paved the way to Clinton’s defeat.9

The revolution will not be staffed. This isn’t some hippie-dippie reflex that suggests everyone participating in a campaign is equally capable of tackling any role. To be effective, a volunteer organization has to have a structure, with defined roles responsibilities, and a definite hierarchy. In a fast-paced, under-resourced situation like an insurgent political campaign, it won’t always be neat and tidy. In fact, at times it’s a beautiful mess. That was certainly true on Bernie’s campaign. But with careful attention to structure, accountability, and detail, the work will get done. Under those circumstances, volunteer teams almost always come through.10

‘All Resistance Is Local’: A Plan of Progressive Action for the Trump Years

In the Saul Alinsky tradition that has come to dominate thefairly way most progressives think about organizing (whether they know it or not), the role of organizers is to win people over one by one in personalized consciousness-raising sessions. The ratio of organizers to people being organized must therefore be very small. It is difficult to imagine campaigns based on this structure scaling up, which is why most progressive campaigns aren’t big enough to win.11

It’s time for every community or advocacy organization that is trying to build power to question the Alinsky model. Every group that stands for something important, no matter how small, has a list of supporters. Those supporters want to help your effort succeed. Put them to work! Onboard them the same way you would train paid staff. Create volunteer positions and teams and allow people to apply to join. Give them some tests and a trial period. If it doesn’t work out, tell them so and look for someone new. 12

There are a ton of people out there with incredible life and work experience who are just waiting to shine in a part-time role of responsibility. Remember that working people who are teachers, construction workers, or caregivers can be denied access to movement leadership when organizations insist on only giving responsibility to full-time paid nonprofit employees—often at lower wages than tradespeople or workers in the caring professions can attain with years of experience. On the Sanders campaign, our best volunteers were working-class women of color.13

If organizations fail to rise to the challenge of giving volunteers meaningful roles in the movement, like-minded volunteers can get to work on their own. Anyone can take a clipboard to an anti-Trump protest and collect the names, phone numbers, and email addresses of everyone at the march who wants to get to work. Individuals can organize in-person meetings or conference calls and together come up with a plan that’s right for their group and community. These days it’s easier than ever to keep connected over time with Google Apps, Facebook groups, Slack, and other free or cheap consumer software.14

What can volunteers do together? Lobby municipal leaders to declare a sanctuary city and protect immigrants from deportation. Hold the police chief accountable for enforcing hate-crimes legislation in the wake of Trump-incited violence. Draft people to run for office or local party committees and then help them win. Participate in national campaigns that welcome volunteers, like Color Of Change, Brand New Congress, and the protesters at Standing Rock. Anyone who needs help figuring out what to do and how to do it can read our new book, Rules for Revolutionaries: How Big Organizing Can Change Everything.15

Now is the time to tap into the latent capacity in the grassroots. Millions of people are ready to get to work to rebuild our economy and our democracy, starting with principled opposition to Trump. But mass participation won’t lead to mass power without organization. We don’t have the money to pay enough staff to manage a movement big enough to win. Fortunately, the volunteer leaders we’re looking for have been there all along. They’re not waiting for a job offer, a W-4 form, or a paycheck. And that’s a good thing. There’s a hell of a lot of work to do.

This piece is adapted from Rules for Revolutionaries: How Big Organizing Can Change Everything (Chelsea Green Publishing), by Becky Bond and Zack Exley.16