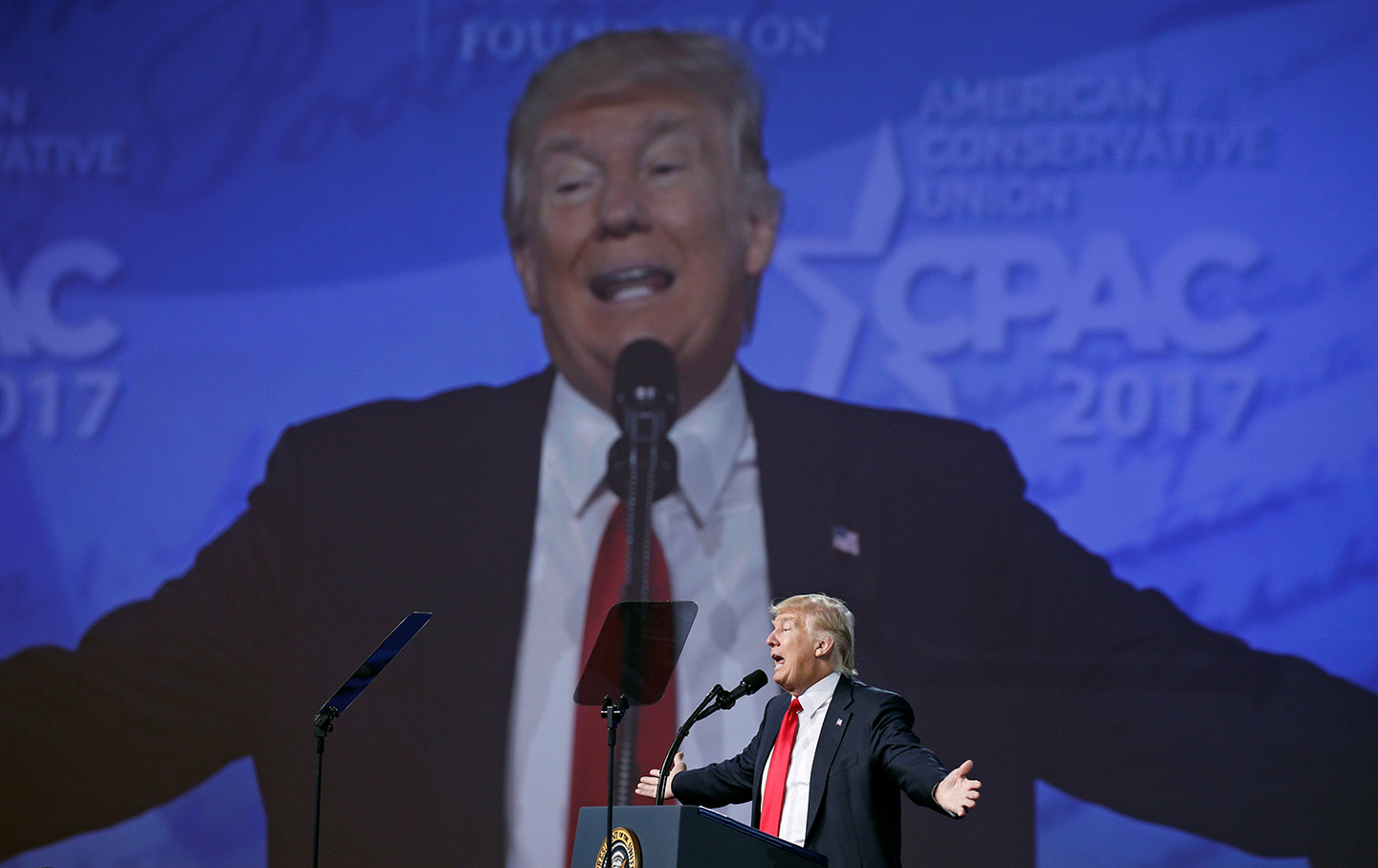 Imagine: A real-estate heir with a fake tan and no qualifications invites the viewing public to join him on an unprecedented adventure. He will, he says, drain the swamp in Washington, DC. Over the course of a few short weeks, he selects contestants for his show, prizing style over substance and fealty over independence. Once the work starts, however, he spends much of his time in a gaudy mansion in Florida, where he plays golf, meets with foreign dignitaries, and tweets his angry meltdowns. Contestants are regularly eliminated. He feuds with several nemeses, but the one he hates the most is the one he has known the longest, and the one who nearly stole the spotlight from him. At the end of the first season, he has failed to drain the swamp, but he is making money for himself through tie-ins and merchandising. The second season promises even more twists and turns, with members of his own team questioning his mental capacity, to which his response is that he is “a very stable genius.”

What would have once been merely an exercise in the suspension of disbelief is now our national nightmare. This president appears to have neither the interest nor the ability to govern. He is said to favor pictures and charts over long blocks of text, and White House staff have had to adapt their briefings accordingly. Rather than pore over reports and analyses from his intelligence agencies, he watches pundits on Fox News, then tweets his thoughts. Decisions are made on the fly, and then sometimes unmade or revised in an effort to help him save face. He lies almost constantly, even about matters of no importance, and his lies travel around the world before corrections can be made. He refers to the media as “the enemy of the American people” and bullies or insults anyone who doesn’t fall in line with him. Yesterday’s friends become enemies, as Steve Bannon, his former chief strategist, found out recently when the president dismissed him as “Sloppy Steve.” His views about race are perhaps best summarized by the fact that David Duke and members of the Ku Klux Klan have embraced him.

So where do we stand after a year? Donald Trump’s 12 months in office have been short on achievement and long on frustration. Although his party controls both the House and the Senate, he couldn’t repeal and replace the Affordable Care Act, couldn’t make Mexico pay for the border wall, couldn’t prove that “millions” had voted illegally in the last presidential election, couldn’t defund Planned Parenthood, and, perhaps most frustrating of all for him, couldn’t stop the federal investigation into his campaign’s ties to Russian government agents.

And yet the president has managed to wreak a lot of damage in a short amount of time. The Muslim ban, which he signed a week after taking office, was famously and memorably blocked by federal courts, but by September of last year it had been modified to include two non-Muslim countries, Venezuela and North Korea. With this sleight of hand (North Korea already bans most of its nationals from leaving, and the restrictions on Venezuelans only apply to government officials and their families), the ban on Muslims from Iran, Syria, Libya, Chad, Somalia, and Yemen was allowed to proceed. Unless challenges in the federal appeals courts succeed, and unless the Supreme Court eventually rules against it, this immoral policy is now the law of the land.

Animus against Muslims is just one pillar of Trump’s promise to “Make America great again”; the other is xenophobia. After he became president, he ordered Immigration and Customs Enforcement to speed up deportations of undocumented immigrants, including those who have been in the country for decades and have not committed serious crimes. But he has made it clear that he’s opposed to legal migration from certain countries as well: The New York Times recently reported that Trump has complained to his staff that immigrants from Haiti “all have AIDS” and that those from Nigeria would never “go back to their huts.” He has also thrown his support behind the so-called Raise Act, a bill introduced by Senators Tom Cotton and David Perdue that would cut legal immigration by 50 percent and significantly favor people from English-speaking countries. And let’s not forget that his administration’s response to Hurricane Maria in Puerto Rico has been dismal: Four months after the disaster, nearly half of the island’s people are still without power. 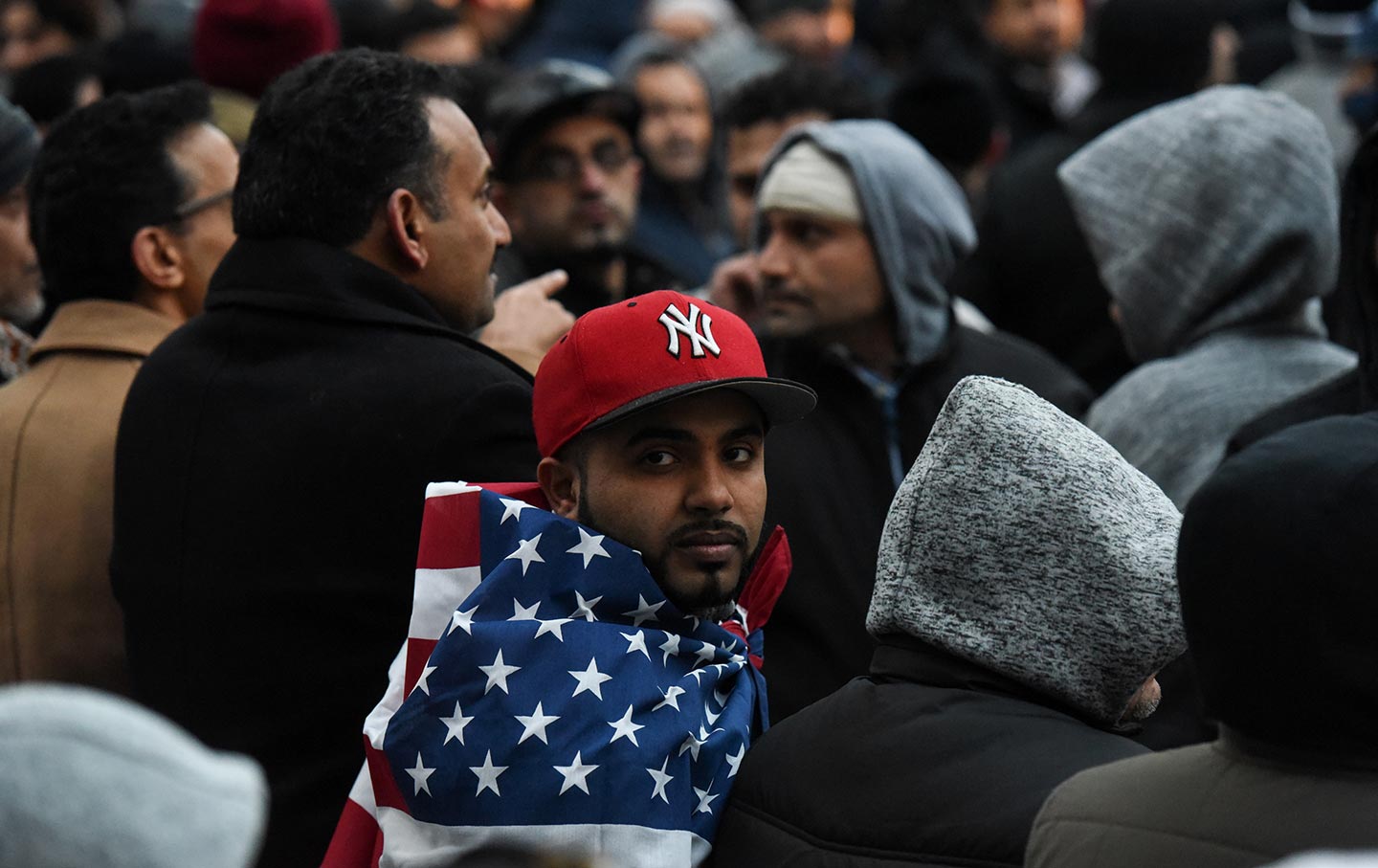 Trump’s rhetoric has had a significant effect on the culture. The Dreamers are living in limbo, while the fascist right, now emboldened, seeks to expand the window of acceptable discourse, both on and off college campuses. The country looks more divided than at any time in recent memory. How bleak the future seems when, on the second day of the new year, the president tweets, “I too have a Nuclear Button, but it is a much bigger & more powerful one than his, and my Button works!”

Not only have Republicans been remarkably silent about Trump’s behavior this past year; they have enabled it. They confirmed his appointments, dismissed his critics, and smiled through photo ops with him. The reason for their silence and acquiescence is clear: “He’ll sign anything we put in front of him,” says Mitch McConnell in Michael Wolff’s Fire and Fury. In order to get the tax cuts that will significantly benefit them and their corporate friends, the Republicans have been willing to endanger the entire country.

We now enter the second year of the reality-show presidency. Each morning, we wake up with the familiar dread of what the president might do next. Nuclear war is no longer a remote possibility; it is the potential outcome of an angry outburst. But despair is not an option. It’s time to be daring, to demand better of our representatives and to work harder—much harder—at holding them to account. And if they don’t listen, it’s time to put them out of work. How are you preparing for the midterms in November?