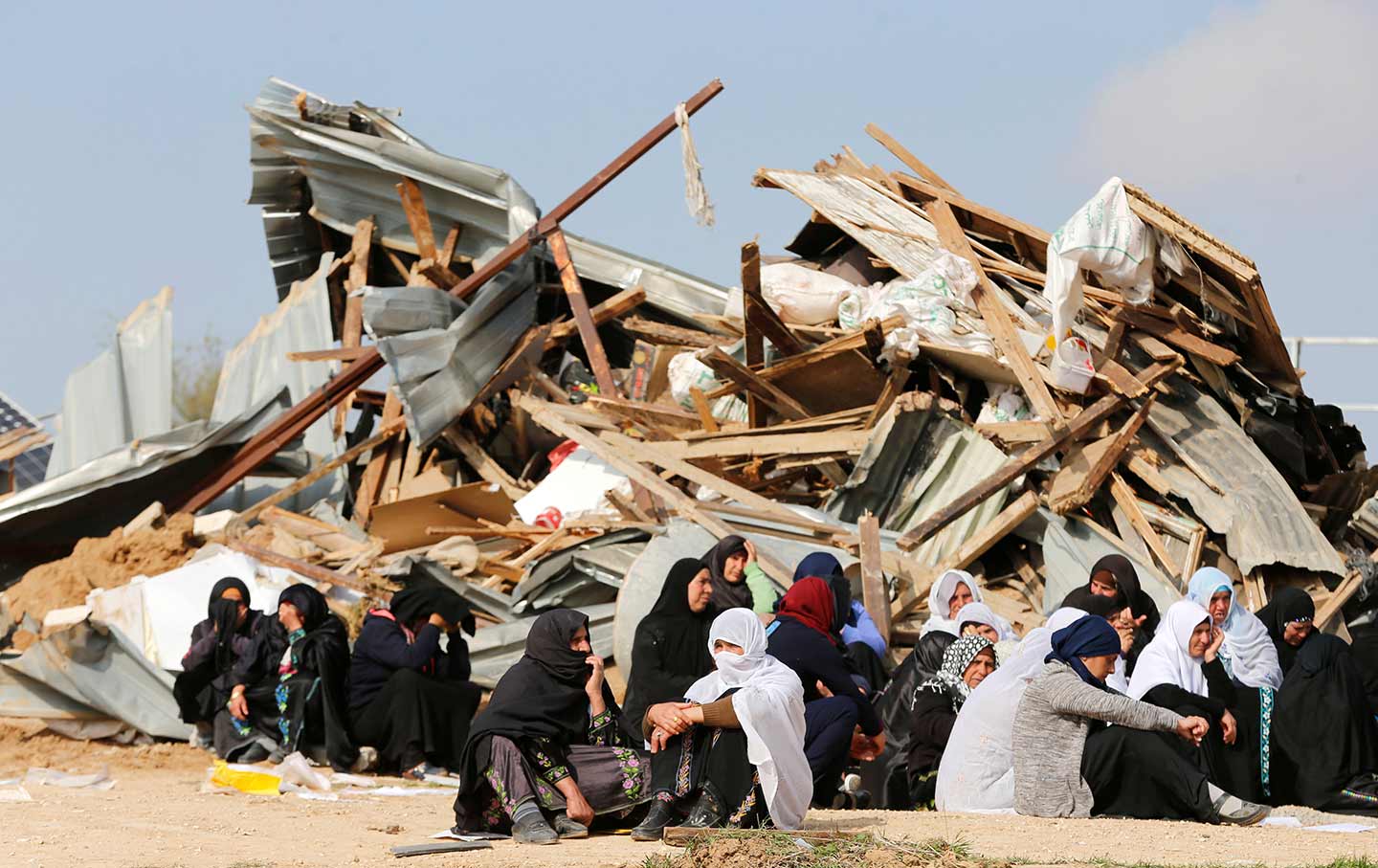 Bedouin women sit next to the ruins of their dwellings, which were demolished by Israeli bulldozers in Umm al-Hiran, a Bedouin village in Israel’s southern Negev Desert, January 18, 2017. (Reuters / Ammar Awad)

Seventy years ago, my world and that of nearly a million other Palestinians was changed forever by the establishment of the State of Israel. Expelled from our homes and land to make way for a Jewish-majority state, transformed overnight into refugees in exile or internally displaced people, our lives were turned upside down and shattered.

Seven decades later, Israel continues to systematically uproot and displace Palestinians inside Israel and in the occupied West Bank, part of an effort to erase our presence on the land and replace us with Jewish Israelis that has continued relentlessly, year after year, since 1948.

I was born in 1939 in Nazareth, Palestine, the sixth of nine children, and grew up in a small town nearby called al-Mujaydil. I have fond memories of my childhood, of playing with my cousins who lived in the neighborhood, and the smell of fresh almonds, lemons, and rain. But in April 1948, everything changed. 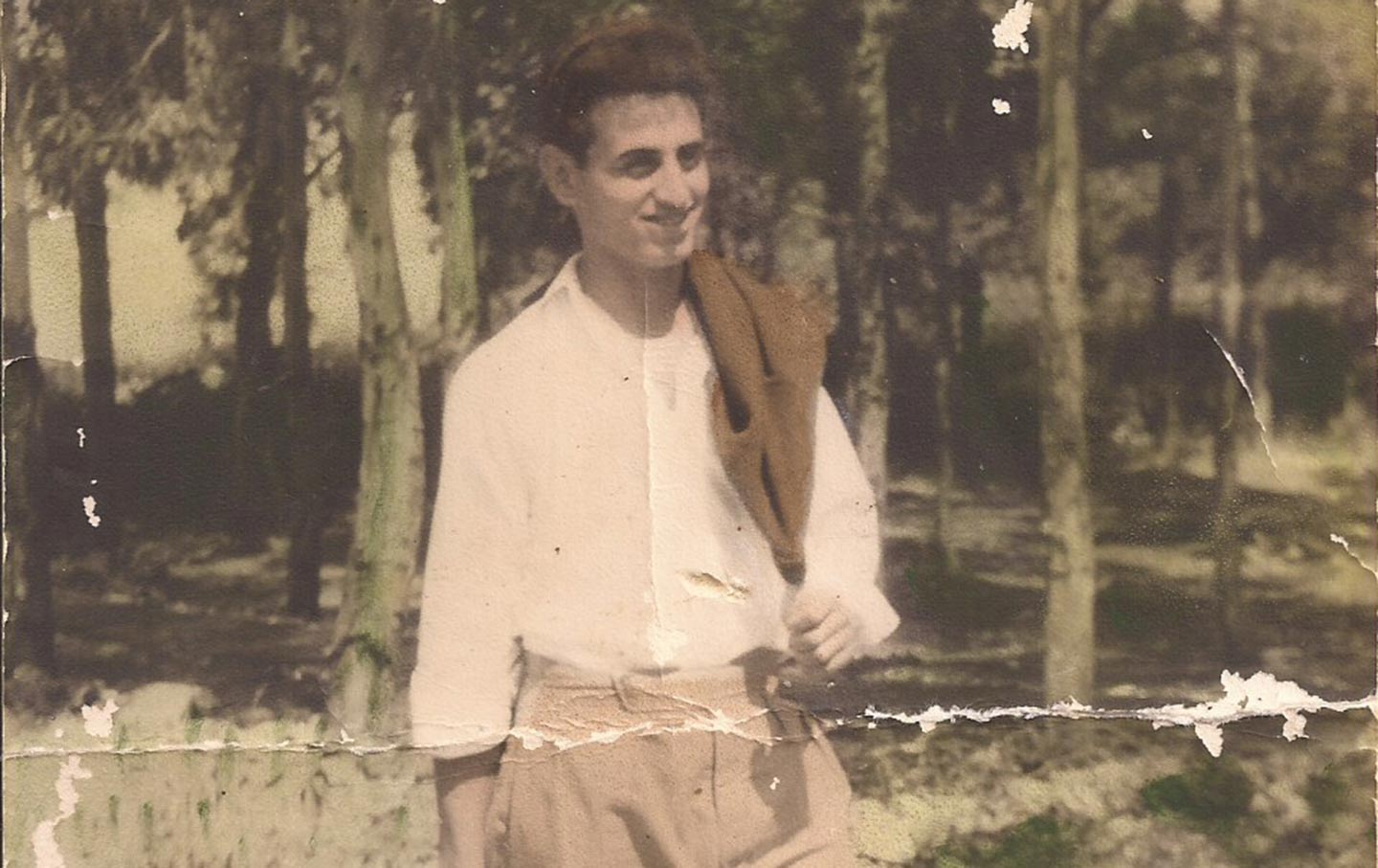 Mohamed Buttu circa 1962, aged 23. Buttu is an internally displaced Palestinian from al-Mujaydil.

My father was returning from Haifa when the car he was in was stopped by members of a Zionist militia, who tied up, blindfolded, and abducted him, along with the other passengers. We had no idea where he was or whether he was alive or dead. The mass expulsion of Palestinians by Zionist paramilitaries was in full swing, with tens of thousands already driven from their homes, and terror and chaos was spreading through the country. My mother, convinced that my father had been killed, held a funeral for him.

After three weeks, my father was suddenly released without explanation. When he returned home, he learned that Zionist fighters were approaching our town. Fearing for our safety, he decided to flee with us to Nazareth, where he hoped to find temporary refuge before returning home soon. Six weeks later, the city was attacked. I can still vividly recall bullets landing between my feet. My father decided to move once more, and we set out on foot to the north, on a nearly 50-mile journey to Lebanon.

With the passage of time, we realized that the neighboring Arab states were not going to liberate Palestine and allow us to go home, so in 1950 my father decided that we would return on our own. Making his way to Jordan, he walked across the border into Israel through the West Bank, arriving back in Nazareth. The rest of us followed shortly thereafter, making the journey on foot as well, except for my eldest sister, who stayed behind in Jordan because she had a young child and feared being killed by Israeli soldiers on the journey, as many Palestinians who tried to return had been.

Upon returning, we discovered that the roughly 150,000 Palestinians who remained inside what was now Israel were treated as unwelcome foreigners in our own country. Although we were given citizenship, most of our land was taken from us and we were put under military rule until 1966. My mother was even prosecuted for “infiltrating” back into her own country and was ordered deported, along with me and my siblings. We were only given a reprieve and spared a second expulsion as a result of protests by Palestinians who feared Israel planned to expel all those who still remained. 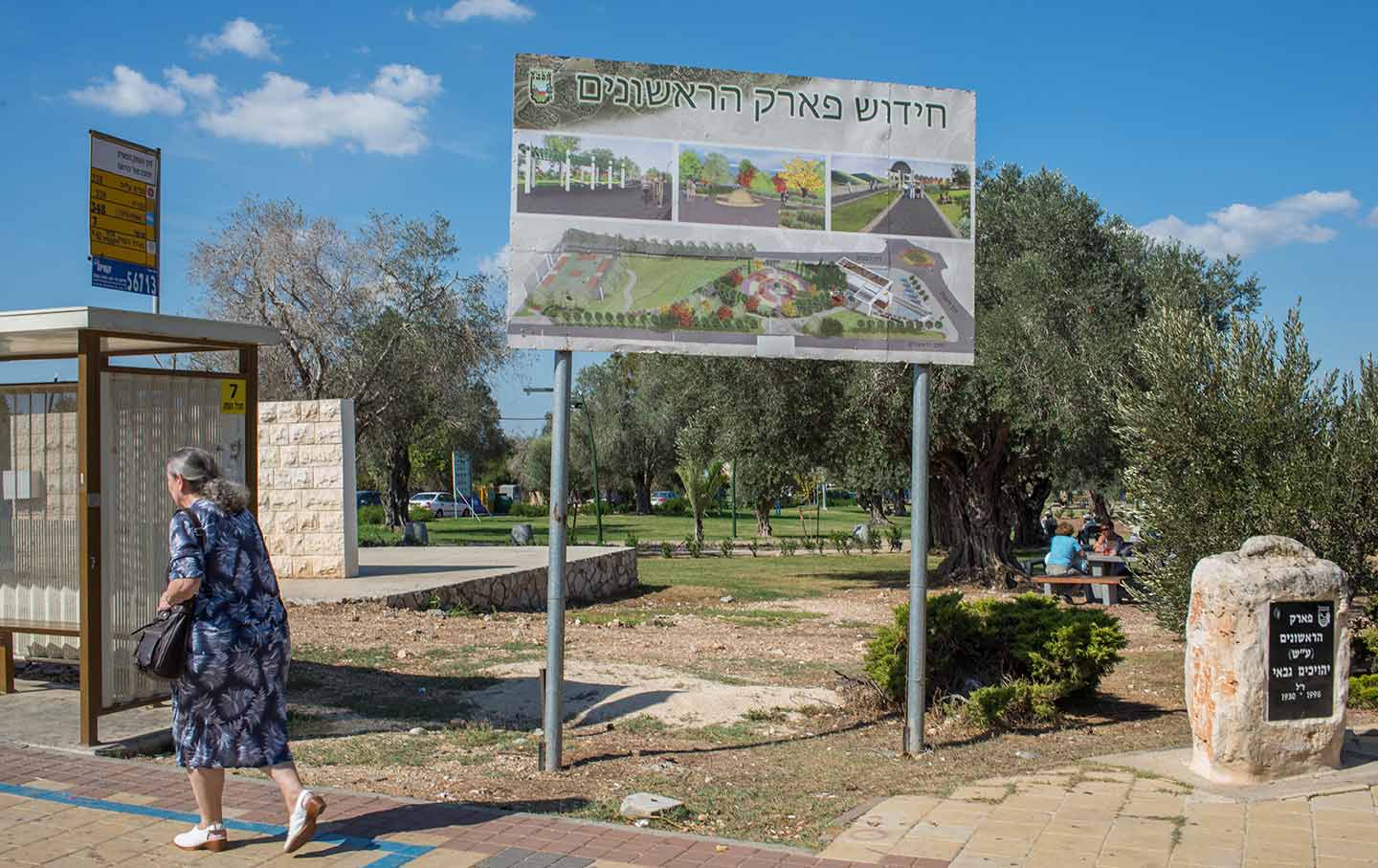 Area of Buttu family property, part of which was turned into a park that is about to be renovated. The sign reads: “renovation of the park of the originals” (note the very old Palestinian olive trees in background), al-Mujaydil, Palestine, October 20, 2013. (Thomas Dallal)

But while we were allowed to stay, the wounds we suffered were still fresh and painful. Al-Mujaydil’s homes had been completely wiped off the map—leveled and replaced with new ones built for Jewish immigrants. The mosque was destroyed, as was the Muslim cemetery. All that remained were two churches and a Christian cemetery. Today, a park and a L’Oreal factory stand on the site of my hometown. A sign in the park says that the town was established in 1950 by Iranian immigrants. Imagine what it is like to watch helplessly as your home and most cherished personal possessions are taken by strangers or destroyed, and the history of your family and people erased.

My story isn’t unique. In fact, I’m one of the lucky ones. Approximately 750,000 Palestinians were expelled from their homes and were prevented from returning, in what became known as the Nakba (“catastrophe” in Arabic). More than 400 Palestinian towns and villages were systematically destroyed or taken over for the use of Jewish Israelis. And hundreds of Palestinians were killed in some two dozen massacres that spurred the refugee flight.

Today, Israel continues to steal Palestinian land, revoke residency rights, and destroy Palestinian homes so that Jewish Israelis can live in their place. In a vivid example of this, Israel is currently in the midst of demolishing the entire community of Umm al-Hiran in southern Israel and evicting its Palestinian residents, who are citizens of the state. In its place, Israel plans to build a town for Jews, called “Hiran.”

‘The Palestinians Have Not Forgotten, They Have Not Gone Away’

Palestinians Engaged in Nonviolent Protest. Israel Responded With a Massacre.

For more than 50 years, Palestinians in the occupied territories have lived under oppressive Israeli military rule with no rights, while Palestinian citizens of Israel are subject to dozens of laws that discriminate against us. One of these laws prevents us from reuniting with family members who were expelled in 1948, my sister among them. Although she was born, raised, married, and gave birth to her first child in al-Mujaydil, Israel refused to let her return and rejoin our family. As a result, she lived out her days in Jordan, where she passed away in 2002, still longing to return home. My cousins remain scattered throughout the world.

Millions of other Palestinians continue to languish stateless in impoverished, overcrowded refugee camps. In many cases, they live just a few miles from the homes they were forced from, where Jewish Israelis now live. In recent weeks, Palestinians in Gaza, who have suffered under a cruel and illegal siege for more than a decade, took part in the Great Return March, calling for refugees to be allowed to exercise their legal right to go home, a right enshrined in UN General Assembly Resolution 194 of 1948. Some three-quarters of Gaza’s population are refugees from inside Israel. In response, Israeli snipers have shot and killed more than 100 unarmed protesters.

The Nakba wasn’t just a historical event. It has continued unabated for 70 years. Every time I leave Nazareth I pass the town where I grew up. Although I can see it and I still have the deeds to more than 100 acres of land, I cannot return and live there. I have one grandchild, a precious 4-year-old boy who I love more than anything else in the world. I dream of a day when he can live in freedom and equality in our homeland and pray that he does not have to endure the same suffering that we have gone through as a result of the racist, apartheid regime that Israel has established in our land.