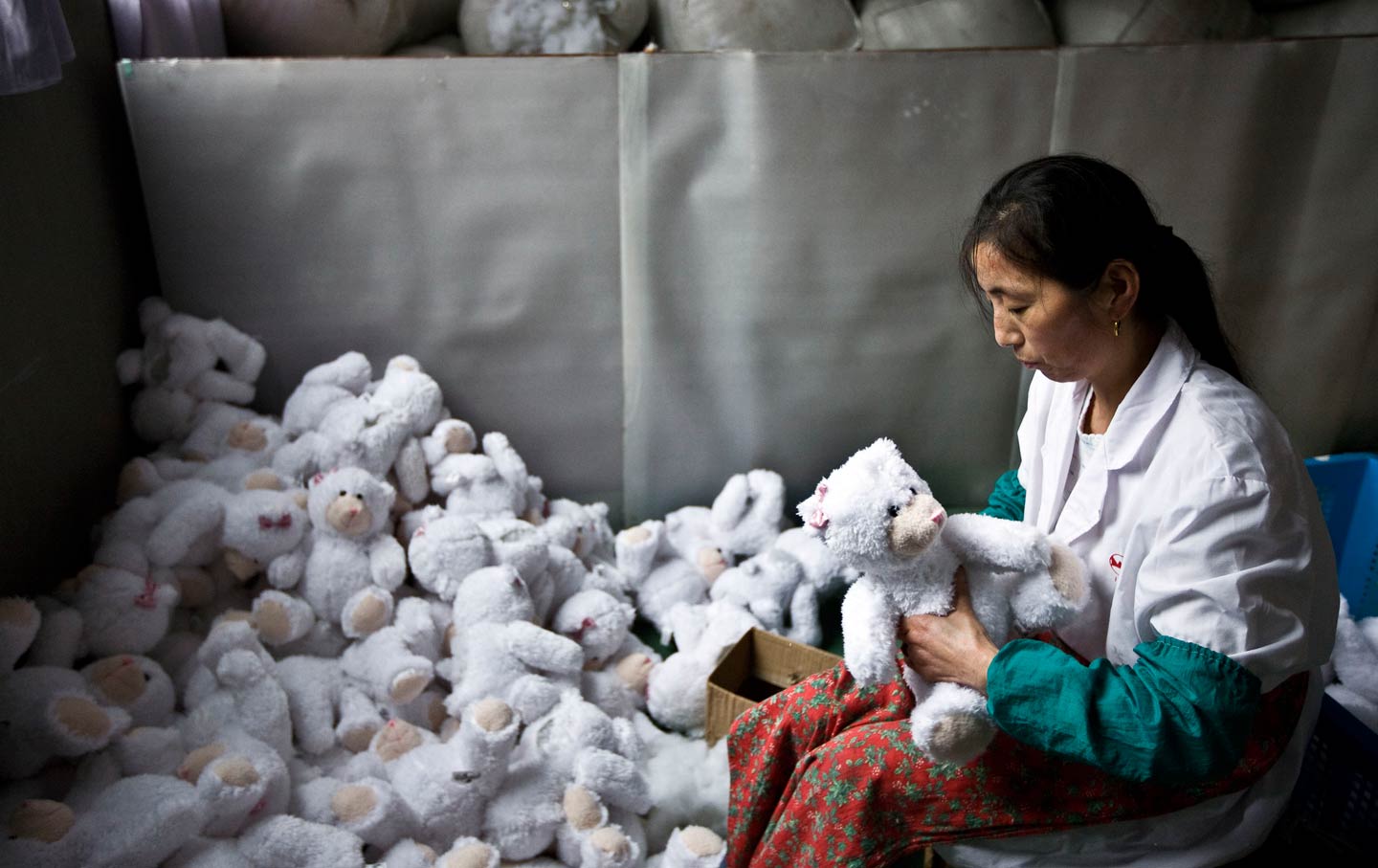 A worker stuffs newly made toys at the production line of a factory in suburban Shanghai. (Reuters / Nir Elias)

When the glass doors fly open this Friday, riotous crowds will spill into a tide of mass consumption at Walmarts nationwide. But amidst the frenzy, the bleak undertow of global commerce will wash up against the rock-bottom prices: For workers on a distant shore, Black Friday caps another cycle of the round-the-clock drudgery driving the biggest shopping day of the year.

China Labor Watch’s (CLW) report on China’s toy industry is a seasonal reminder of how American families’ appetite for cheap toys is fed by not-so-fun factory jobs, in which workers struggle to sustain their own families on pennies an hour. The advocacy group reports:

In workshops that are hazardous to their health, millions of workers toil under cruel management, 11 hours a day, six days per week. Over the course of a year, a toy worker may only be able to see her parents and children one time.

In low-wage factories that bring Star Wars and Frozen toys to big-box shelves, field researchers reported observing up to 80-hour workweeks, widespread wage theft, and apparent violations of both corporate ethical sourcing codes and Chinese labor law—including age-discriminatory hiring, nonpayment of mandatory social insurance, and inadequate safety training. For example, at two suppliers, Winson and Jetta, employers reportedly “diverted” overtime hours to discount weekend work. As a result, CLW claims, “employing up to 11,000 workers, the two companies may be cheating workers out of $1 to 2 million a year.”

The true price of toys, according to CLW, is measured in the everyday suffering of workers in Chinese cities, who might spend all-day shifts contorting their bodies to mold doll heads or inhaling toxic toy paint fumes. For the Mattel Rock’ Em Sock’ Em Robots, sold on Amazon for $30, CLW reports: “each Winson worker earns only 0.05% the market value of the Rock ’Em Sock ’Em toy. Workers produce nonstop. Young workers sacrifice their youth and health…. Despite such sacrifice, a worker earns only 1/2000 the value of a toy she produces.”

As a brand and sales outlet, Walmart shapes working conditions in both Asia’s manfacturing hubs and the United States’ low-wage retail and logistics industries. While American Walmart associates are staging scattered Black Friday protests, more volatile labor dynamics are erupting in China. CLW details a recent uprising at a Mattel supplier factory, in which workers protested a months-long lag in wages and benefit payments during a lull in production. Riot police and K-9 units cracked down “to suppress the workers’ action and compel them to accept partial compensation.” Another uprising in July at the Jingyu toy factory in Shenzhen reportedly resulted in a strike being similarly squelched by police. Yet in response to CLW’s investigation, the toy industry’s corporate-monitoring organization ICTI-CARE took issue with the findings, commenting that the Jingyu dispute had been successfully resolved and stemmed partially from “poor communications” and “misunderstanding” between employees and management.

In a statement to The Nation, ICTI-CARE argues that in contrast to CLW’s report, the group has observed “a different pattern of continued progress across the 1,100 factories we work with,” and that “[d]riving lasting improvements on labor standards requires commitment from both the top and bottom of the supply chain.”

One thing Western brands seem committed to is showing zero tolerance for labor disruptions overseas, or for any taint on a company’s facade of social responsibility. So establishment-supported auditing firms have produced regular reports showing purported improvements in labor conditions. Still, CLW’s report shows that despite voluminous ethical sourcing protocols and proclamations about acting as good global corporate citizens, the reality on Chinese assembly lines vanishes behind slick media packaging and irresistible prices.

“Pressure on toy producers has actually not been sufficient,” CLW Program Coordinator Kevin Slaten says via e-mail. “What is required is an even more successful awareness campaign which can produce enough reaction that the toy companies put more resources into improving working conditions in their supply chains.”

Another area where consumer awareness is a key blind spot is the fashion sector, though anti-sweatshop campaigns are pressuring some brands to take some action on unsafe conditions and exploitation in Global South factories. The International Labor Rights Forum (ILRF) is campaigning on the third anniversary of the Tazreen factory fire, which killed more than 100 garment workers in a Bangladesh “death trap” plant linked to Walmart and other Western brands. Public pressure has already spurred image-polishing corporate social responsibility campaigns, with brands funneling aid to the victims and recently establishing a new charity, the Tazreen Trust Fund, to issue payouts to workers’ families. So far, Walmart has donated primarily through a corporate-funded philanthropic outfit called BRAC USA. A company spokesperson stated that “through BRAC, we have donated to a medical fund for Rana Plaza and Tazreen survivors and just recently to the newly established Tazreen Victim’s Trust Fund.” This apparently corresponds with a new BRAC Trust Fund donation of $250,000—equivalent to a sliver of 1 percent of Walmart’s profits last year.

But the real debt Walmart owes doesn’t just stem from workers’ injuries: it stems from the impunity with which the company has managed to evade liability. Walmart claimed the factory was not an “authorized” supplier, shifting the blame to shady subcontractors lower on the production chain. In a comment to The Nation, Walmart stated that it was “committed to helping our suppliers make factories safer for all and preventing tragedies like Tazreen,” stopping short of calling its charity “compensation” for victims. But advocates nonetheless condemn Walmart for failing to protect safety for all workers in its manufacturing network.

“Had Walmart put into place fire safety renovations after its inspections to remediate the high risk violations that it uncovered, it could have saved 112 lives,” says ILRF Director of Organizing Liana Foxvog via e-mail. “Instead, Walmart didn’t take any meaningful action to protect workers…and then distanced itself as much as it could after the horrific fire.”

Transnational supply chains trade on the political and social distance between the Global North and South to extract maximum profits. At the same time, the global economic forces girding Walmart’s commercial empire are also helping globalize messages of economic injustice and social unrest. It’s up to American consumers to respond by politically leveraging their purchasing power. Because while multinationals eagerly claim credit for delivering the best Black Friday deals, only the savviest shoppers will link Western brands to the exploitation underwriting those unbeatable prices.

Note: This article has been updated to correct a reference to the ICTI-CARE’s comment on the Jingyu factory protest in Shenzhen—not the protest at the Mattel supplier Ever Force, as originally stated.