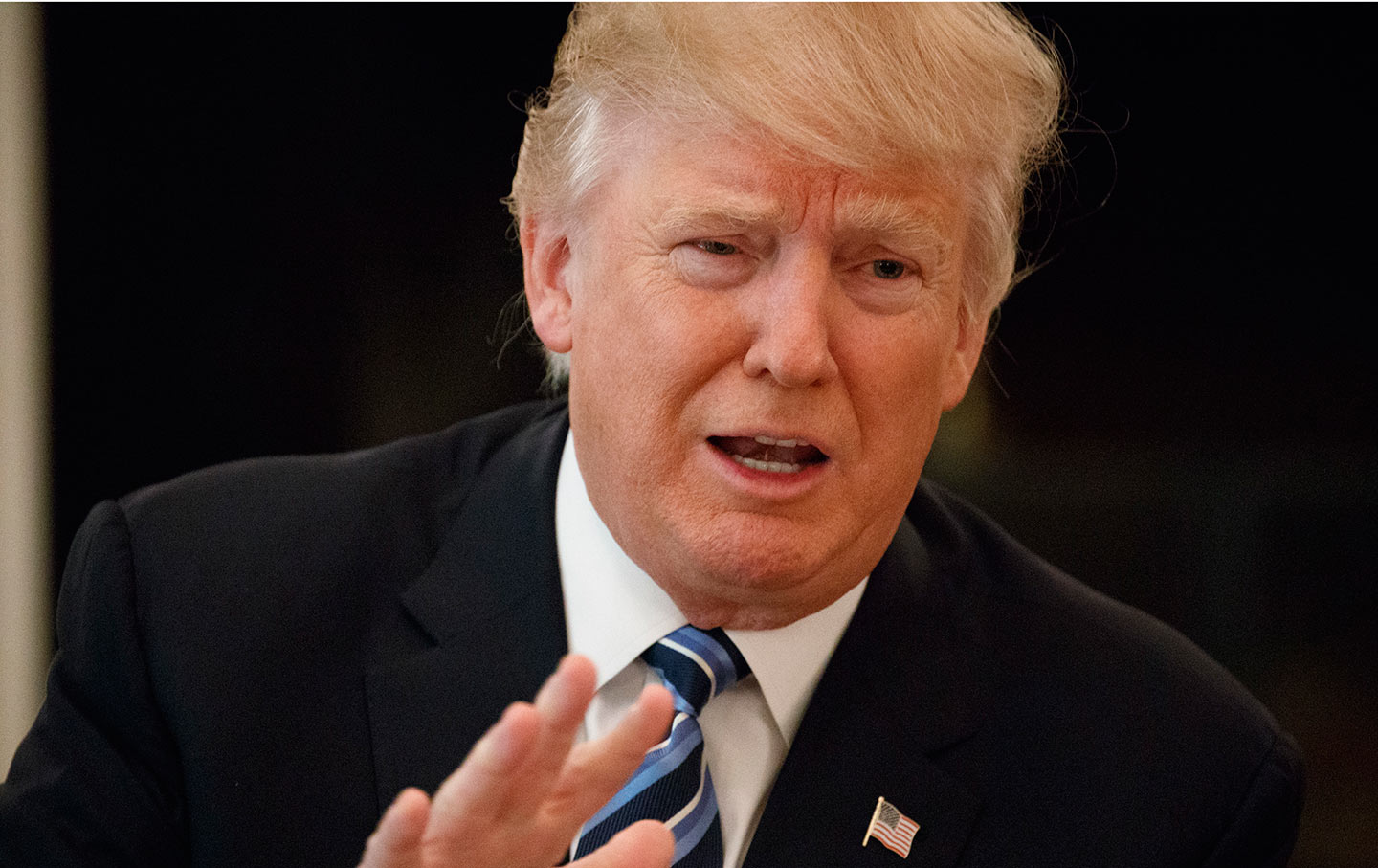 How do we know if something is true? Our options are limited. We can place our trust in experts, institutions, and publications that, governed by some form of peer review, promise the results of patient study and methodological rigor. Or we can depend on answers derived from our own lived experience.

In his first month in office, President Trump has tried to lay waste to both approaches, forcefully pivoting away from his purported investment in experience-based common sense. In the process, he’s combined two different political and epistemological traditions into one dangerously toxic brew.

Trump began his quixotic campaign for president as the embodiment of a familiar kind of right-wing, common-sense populism. Instead of deference to well-trained scientists, academics, journalists, and even governmental authorities, he touted the true wisdom of “the people.” In place of fancy studies built on research, data, and modeling, he promised plain-spoken, off-the-cuff reports on the state of our world and obvious, practical solutions to our problems. That is, Trump suggested politics was actually quite simple if only one would rely on the kind of basic reasoning which emerges from just going about normal, everyday business using one’s senses and instincts and which—surprise, surprise—tends to run counter to “establishment” conclusions.

Of course, Trump is a Wharton-educated, self-professed billionaire with close ties to the global plutocracy. But by the time he adopted the pose, the populist appeal to common sense was already a time-tested strategy to gain votes on the right, previously used by a long list of Republican pundits and politicians from Mike Huckabee to Sarah Palin to Ben Carson, who all offered to apply the infallible, non-political logic of the kitchen table to the management of an ever more intricate and interdependent world. So when asked about global warming, the smart move was to say that it had to be a hoax because we got a lot of snow last winter, or, in response to the financial collapse of 2008, to suggest that if families had to cut spending in hard times, the government should, too. Common-sense truths require no further study to prove themselves correct—or so the theory goes. They are just things that everybody knows, and if they had any sense, would readily agree upon too.

By the time Trump adopted it, the populist appeal to common sense was already a time-tested strategy on the right.

This faith has a long American pedigree. In the 1980s, Ronald Reagan often promised “common-sense solutions” on issues from taxation to foreign policy, drawing on folksy aphorisms to make his points. He linked the idea to the founding fathers, and, in particular, to Thomas Paine, who had once promised, in defense of a then-radical cause, to give his readers nothing but “simple facts, plain arguments, and common sense.” By 2009, radio talk-show host Glenn Beck could rewrite the former left-wing icon’s most famous book as a right-wing treatise for our times, and businessman Herman Cain could run for president in 2011 calling himself “the president of the University of Common Sense.” Trump, of course, eschews history. But when he announced that the solution to illegal immigration was building a very big wall along the southern border, it was clear that—the racism of the idea aside—he was speaking in this same faux-practical mode, as if to suggest it was the same as what sensible homeowners do in their own backyards. Trump only turned it up a few notches, as is his wont.

The risk of deploying such rhetoric in the public arena, though, is not just that we end up with simplistic responses to complex problems. By undermining faith in traditional sources of intellectual authority, from the major news outlets to the National Institute of Health and the CIA, common-sense populists recast all those who participate in the “knowledge industry” as biased enemies rather than objective analysts working in the interest of the common good. And when counter-evidence provided by reputable fact-checkers is read as just more propaganda, it not only becomes that much easier for political leaders to lie with impunity. Many people will decide their only option is “self-investigation” (in the words of the man who wielded a gun in a DC pizza place reputed to be the site of a Hillary Clinton–fronted child prostitution ring back in December), or placing full trust in their own instinctive read on things—just as those engaged in pulling the wool over our eyes hope they will do.

Now, however, Trump has taken his approach to the truth in a new and even more worrying direction. He and his representatives have made a point this past month of repeatedly attacking common sense itself.

For years now we have had hints of the new president’s taste for fantasy. He has routinely claimed to have witnessed events—Muslims cheering in New Jersey on September 11, 2001; millions of people voting illegally last November—for which there is no evidence, because they never happened. He has also, since well before he became a serious candidate for the presidency, refused to accept various realities even when provided with concrete, demonstrable evidence. Recall the search for Barack Obama’s birth certificate. Now, increasingly, he is insisting on supposed truths that are easily and convincingly refuted by anyone with the ability to see or hear. When, for example, any citizen can watch a video that contravenes his claim that millions of people filled the mall for his inauguration, forming the biggest crowd ever, and that it wasn’t raining either, even though it was, he not only sticks to such lies; he demands that his loyal supporters back them up.

This relationship to reality is rooted not in traditional American populism but in authoritarianism, and its key historical reference point is not Reagan or Paine, but the totalitarian states of the mid-20th century, in which overt lying became a means of consolidating power. In George Orwell’s (once again best-selling) dystopian novel 1984, Big Brother and the Party are tasked with denying “the very existence of external reality” and telling you “to reject the evidence of your eyes and ears”—until such point as “the heresy of heresies was common sense.” For even common sense—whose “biography,” Orwell’s contemporary Vladimir Nabokov once quipped, “makes for nasty reading”—still requires of its practitioners a certain kind of independence of thought, given its relationship to skepticism, or the ability to detect the lies and obfuscations of others.

In the context of democratic politics, faith in information provided by key institutions, including government agencies, the academy, and a free press should temper the impulse to trust exclusively one’s own experiential sense of the world. But, as Hannah Arendt also recognized, in the context of totalitarianism, when all institutions are compromised and forced to promote only the ruler’s warped view of reality, holding on to common sense becomes essential insofar as it is the only corrective, the only potential source of truth that remains. This much, at least, Trump clearly understands.

Richard Kreitner and The Almanac

When Donald Trump Says His Foreign Policy Is ‘America First’—What Exactly Does He Mean?

In spreading falsehoods that are obviously false, Trump ultimately seeks to do away with all sources of truth and all truths—with the sole exception of the self-defined ones that that emanate from him and his “beliefs” alone. Steve Bannon and Kellyanne Conway, Trump’s chief enablers, have made it abundantly clear that this is the goal. Not only do they follow their boss in constantly demonizing a bogeyman called “the press”—an old rallying cry in right-wing circles, though they have voiced it with a new intensity. Worse, they suggest that out of loyalty, we should now be getting our news exclusively from the president, who “believes what he believes,” as his spokesperson, Sean Spicer, recently put it—accuracy be damned.

This is a terrifying development from the perspective of both politics and epistemology. Trump made his name pushing a kind of angry, simplistic common-sense populism, honed to perfection by an ostensibly anti-elite Republican Party, itself building on a long anti-intellectual tradition in American life. But an explicitly anti–common sense stance, aimed at tamping down citizens’ independent, non-expert reading of the world and derived from mid-century European fascism, appears to be the secret ingredient in his sauce. Putting them together helps the president to advance his distinctive strain of far-right politics. It also undermines, possibly in lasting ways, the ability of the American public to counter even his most preposterous claims.