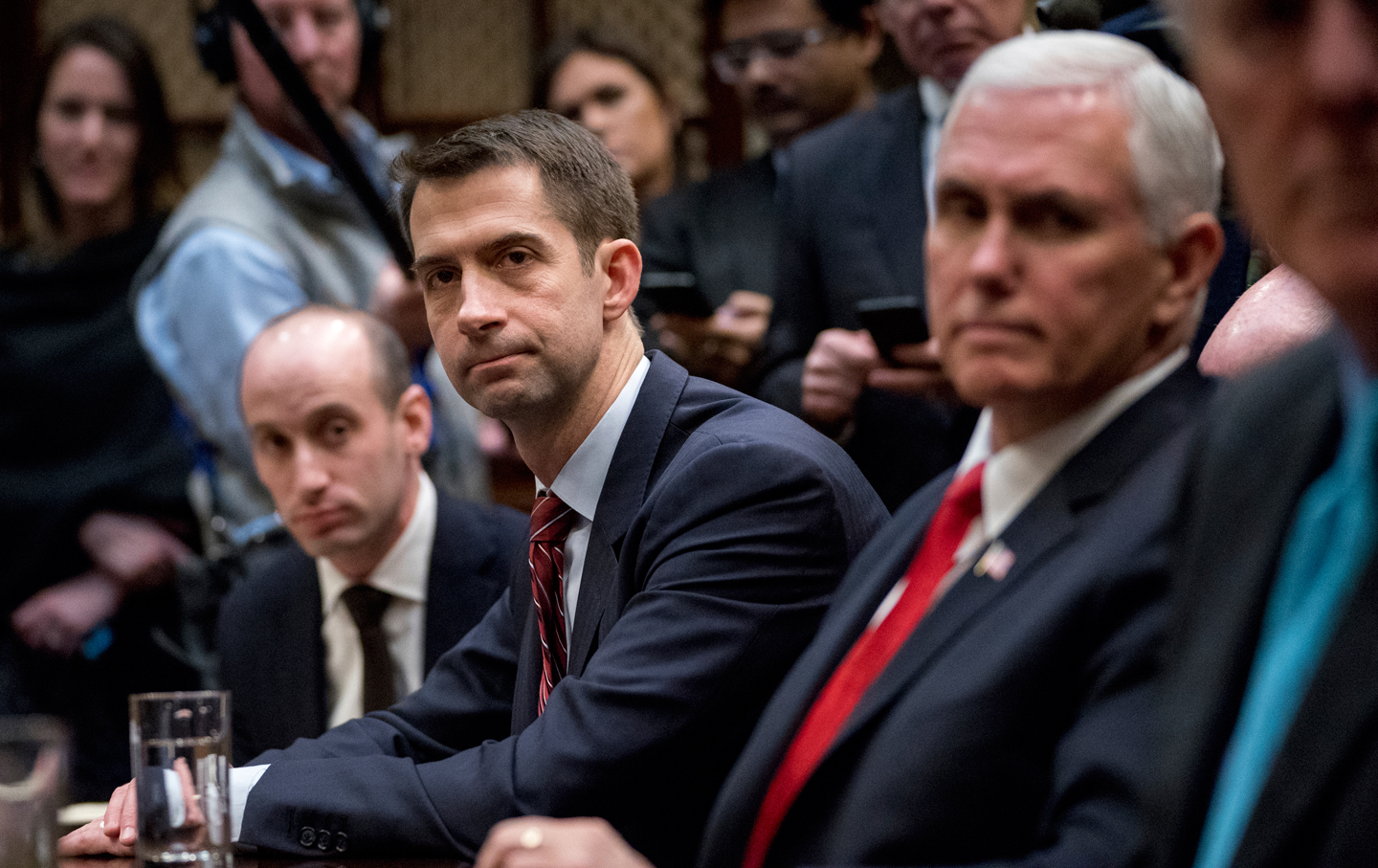 After Donald Trump shocked reporters Wednesday night by saying that the so-called DREAMers, young people brought to the United States by their parents without documents, should be eligible for some kind of “pathway to citizenship,” I publicly suggested that the so-called president might be in trouble, when he returned from his Davos jaunt, with the real Oval Office powers: Chief of Staff John Kelly and senior policy advisor Stephen Miller. I’ve taken to calling them #PresidentKelly and #VicePresidentMiller, because they’ve scuttled at least two potential immigration deals between Trump and a bipartisan group of Congress members working hard on the issue.

I could not imagine that pair had signed off on Trump’s dangling a citizenship opportunity for those whose potential deportation had been deferred by President Obama, an executive order Trump reversed in September. It turns out I was wrong. Trump is not in trouble with Miller and Kelly—because Trump was in fact revealing part of their hardline, nativist immigration proposal. It offers a 10-12 year pathway to citizenship for the 700,000 Dreamers, plus another million or so undocumented young people in similar straits. But in exchange, Trump’s White House is demanding that Democrats as well as pro-reform Republicans accede to proposals that will cut legal immigration by an estimated 50 percent, particularly limiting the flow of non-white immigrants, plus squander $25 billion on the mythical border wall that Mexico was supposed to pay for.

To put it another way: the Trump White House has taken the Dreamers hostage. To free them and other young immigrants like them, they’re telling Democrats (and pro-reform Republicans), you’ve got to give us the other nine million people here illegally and turn away roughly half of the legal immigrants who would otherwise be able to come here in the future.

Before we get caught up in politically handicapping this proposal, let’s call it what it is: The cowardly and overwhelmingly racist repudiation of the nation’s central animating idea, e pluribus unum. Progressives tend to resist the lure of “American exceptionalism,” for good reason. But if there’s anything exceptional about this country, it is that. Despite all of our historic mistakes and cruelties—from eradicating native people to enslaving Africans, persecuting some European immigrant groups and then Latinos and Asians; from Jim Crow to Trump’s birtherism—most Americans know we are mostly a nation of immigrants and are proud of it. This proposal takes an axe to the pillars of American immigration policy. It comes from what was once the radical, nativist fringe of the GOP, which has now, sadly, become its mainstream. 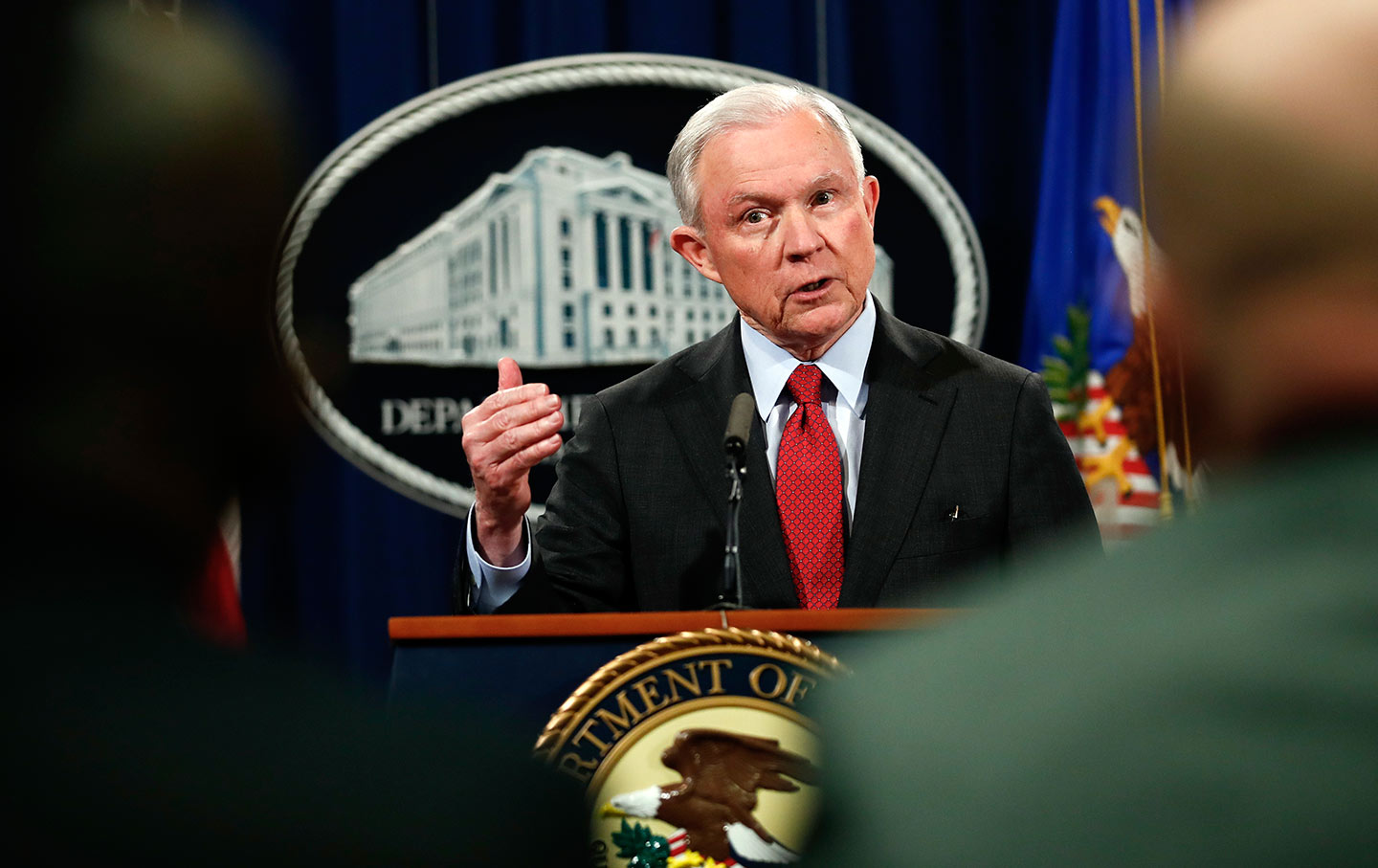 The Trump Administration’s Dangerous Obsession With Crimes Committed by Immigrants

So far, Democrats and immigrant rights groups aren’t falling for it. “This is the play being run from the White House: ‘You guys are desperate for Dreamer relief. We want most of our agenda and a little bit of yours,'” Frank Sharry, executive director of America’s Voice, told the Los Angeles Times. United We Dream’s Greisa Martinez Rosas called the proposal “a white supremacist ransom note.”

Congressional Democratic leaders are vocally opposing the plan as well. Senate Minority Leader Chuck Schumer, who disappointed some progressives and immigration advocates when he agreed to reopen the government on Monday without a DACA fix, tweeted that Trump is using Dreamers “as a tool to tear apart our legal immigration system and adopt the wish list that anti-immigration hardliners have advocated for for years.” Senate Minority Whip Dick Durbin echoed Schumer, saying the proposal represented a “hardline immigration agenda—including massive cuts to legal immigration—on the backs of these young people.” GOP Senators Jeff Flake and Lindsey Graham, who’ve been seeking a bipartisan DACA deal, also dismissed the proposal. As I write, pundits are pearl-clutching over House Minority Leader Nancy Pelosi’s suggestion that it’s a proposal to “make America white again.” But that is, in fact, what it is.

Still, I worry this could be slightly crafty on the part of hardliners like Miller and Kelly: Democrats, and the Dreamers themselves laudably, have made these 700,000 immigrants the sympathetic public faces of the undocumented. Now, the White House knows it has these particularly affecting, politically potent symbols in its hands. Their proposal says: If you want these Dreamers (and others like them) to be safe, all you have to do is let us:

Yes, Bannon is gone, from both the White House and Breitbart.com, but he’s not forgotten. Trump’s nativist former chief strategist laid out the broad goals of this plan two years ago, back before he (officially) joined Team Trump, when he was still doing Breitbart’s SiriusXM radio show. His guest was Steven Miller, then a Jeff Sessions immigration aide. Their exchange will help you understand Trump’s new bill:

MILLER: Well, yes, it’s mind-boggling, and it is something I have talked about before at some length on your program.

Elsewhere in the interview, when Bannon rails against Asian immigrants coming in legally, studying in American universities and then taking science and technology jobs, Miller flatters him: “That was brilliantly stated.” This attack on all immigration is the animating philosophy behind the bill.

And we must not forget Attorney General Jeff Sessions, Miller’s former boss and mentor, who according to a Fox News tweet said last week: “What good does it do to bring in somebody who’s illiterate in their own country, has no skills, & is going to struggle in our country & not be successful? That is not what a good nation should do, and we need to get away from it.”

We know whom Sessions is talking about. Twelve years ago, he opposed a version of bipartisan immigration reform, saying: “Fundamentally, almost no one coming from the Dominican Republic to the United States is coming here because they have a provable skill that would benefit us and that would indicate their likely success in our society. They come in because some other family member of a qualified relation is here as a citizen or even a green card holder. That is how they get to come.”

Trump didn’t mention the Dominican Republic per se in his “shithole” rant; instead he asked “Why do we want people from Haiti here?” while suggesting we need more Norwegians. What more do we need to know to understand the deep racism of their project?

I wrote earlier this week that I was afraid the Kelly/Miller White House was trying to force Sessions’s nativist version of comprehensive reform on Democrats and pro-immigrant Republicans, in exchange for a DACA fix. I was right. I was wrong about Trump flouting the wishes of Kelly and Miller – though I was right about their role in the policy. It turns out Trump made his bold statement to reporters after effectively crashing a meeting that Kelly, his own chief of staff, was having on the immigration proposal—a meeting Kelly was having without his boss. So Trump rolled in and blurted out the plans for a “pathway to citizenship” for DACA immigrants—messing up #PresidentKelly’s plan to provide a background briefing for reporters, perhaps even before Trump himself knew all the details.

Breitbart immediately began calling Trump “Amnesty Don,” and immigration hardliners like Senators Tom Cotton and Ted Cruz rejected the proposal. It’s likely dead on arrival, but now we have Trump’s (and Kelly/Miller’s) first serious DACA proposal. I don’t think this attempt to pit Dreamers against other immigrants is going to work, even with the Dreamers. But it’s one of the craftier moves they’ve made. Which is easy, since none of their moves have been crafty. Some version of this plan could peel off some red-state Democrats. Progressives have to hold the line, making clear this proposal isn’t merely anti-immigrant but anti-American.