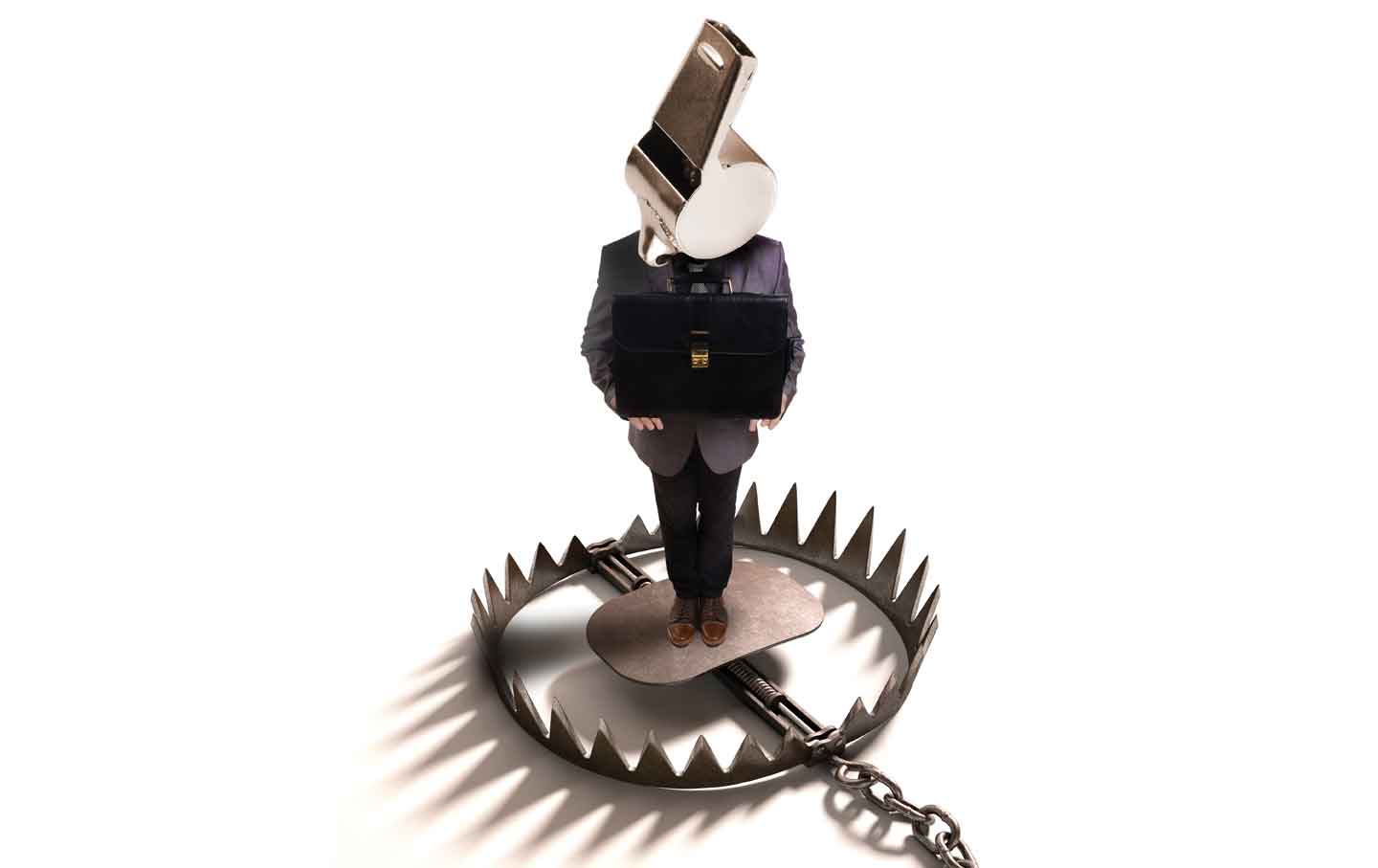 Three years after Edward Snowden’s revelations regarding the National Security Agency’s massive surveillance program, Eric Holder has decided that Snowden may have done the right thing after all. His whistleblowing was “a public service,” the Obama administration’s former attorney general said on a podcast released May 30. Snowden should still be prosecuted, Holder added—leaking top-secret documents is illegal, after all—but his disclosures helped in “raising the debate.”

This article is adapted with permission from Mark Hertsgaard’s book Bravehearts: Whistle-Blowing in the Age of Snowden (HotBooks/Skyhorse).

Snowden welcomed Holder’s about-face, which buttresses Snowden’s longstanding offer to return home and face trial if he is allowed to offer a “public-interest” defense for his actions. In a tweet, Snowden seemed bemused but hopeful about the evolution in officialdom’s views:

2015: Still, technically it was unlawful

Meanwhile, dramatic new disclosures offer fresh insights into why Snowden did what he did and raise tantalizing questions about additional secrets that may lurk in the documents he released. On May 22, my own exposé of a secret new chapter in Snowden’s story was published in my book, Bravehearts: Whistle-Blowing in the Age of Snowden. The exposé details extraordinary revelations from John Crane, a former senior Defense Department official who has come forward publicly for the first time about what he witnessed inside the Pentagon.

A solidly built Virginian with flecks of gray in a neatly trimmed chinstrap beard, Crane had been an assistant inspector general at the Pentagon, where he’d handled whistleblower cases from 2004 until 2013, when his bosses forced him out because he insisted on standing up for the legal treatment of whistleblowers. In dozens of hours of interviews, Crane told me how his superiors, allegedly, broke the law repeatedly while dealing with whistleblowers—­obstructing justice, withholding and probably destroying evidence, and then lying to a federal judge about it, among other crimes.

Given this bureaucratic hostility to whistleblowers, Crane said he understood why Snowden might decide his only workable option for exposing the NSA’s surveillance was to break the law by leaking documents to the press. Yet Crane lamented Snowden’s actions. “Someone like Snowden should not have felt the need to harm himself just to do the right thing,” Crane told me.

“When I was at NSA, everybody knew that for anything more serious than workplace harassment, going through the official process was a career-ender at best,” Snowden told my Guardian colleague Ewen MacAskill in response to Crane’s revelations. “If your boss in the mailroom lies on his timesheets, the [inspector general] might look into it. But if you’re [former NSA executive] Thomas Drake, and you find out the president of the United States ordered the warrantless wiretapping of everyone in the country, what’s the IG going to do? They’re going to flush it, and you with it.”

“Flush” is an apt term for what the Pentagon did to Drake. If you want to know why Snowden did what he did, the way he did it, you have to know the stories of both John Crane and Thomas Drake. As Snowden has said, “If there hadn’t been a Thomas Drake, there wouldn’t have been an Edward Snowden.”

Drake was a much higher-ranking official in the NSA who tried, 10 years earlier, to blow the whistle on the same NSA activities that Snowden revealed. But Drake, a career military man, followed the rules, raising his concerns through official channels—first with his superiors at the NSA, then with the agency’s congressional overseers.

In return for his obedience, Drake’s house was raided in 2007. He was fired, stripped of his security clearance, threatened with life in prison, and eventually reduced to working as a clerk in an Apple store, the only job he could find.

But not everyone in the government tried to throttle him. Crane felt so strongly about the value of whistleblowers that he carried in his pocket a copy of the Whistle­blower Protection Act and the US Constitution so he could cite them during workplace conflicts. Crane fought for the lawful treatment of Drake not because Crane was for or against the NSA surveillance; he did it because the law required that all government whistleblowers be given anonymity and other protections when they report “waste, fraud, or abuse,” as every federal employee is obligated to do.

Crane later detailed his allegations in affidavits he filed with the federal Office of Special Counsel after he became a whistleblower himself, following his forced resignation. The OSC, which adjudicates whistleblower cases throughout the federal government, ruled in March that there was a “substantial likelihood” that Crane’s charges are true. This finding in turn triggered a requirement for Defense Secretary Ashton Carter to organize a fresh investigation of Crane’s allegations, which the Justice Department is conducting.

The supreme irony? The Pentagon officials who led the charge against Drake ended up unwittingly teaching Snowden how to evade their clutches. Drawing on the example of Daniel Ellsberg, the former Defense Department adviser who leaked the Pentagon Papers in 1971, Snowden removed key documents from the NSA database and gave them to independent journalists Laura Poitras and Glenn Greenwald, who, along with MacAskill, began publishing articles based on Snowden’s revelations.

“The sad reality of today’s policies is that going to the inspector general with evidence of truly serious wrong­doing is often a mistake,” Snowden told MacAskill regarding Crane’s revelations. “Going to the press involves serious risks, but at least you’ve got a chance.”

Snowden had plenty of criticisms of the mainstream media; one reason he didn’t take his revelations to The New York Times was his distrust of the paper after its editors agreed to President George W. Bush’s request, just before the 2004 election, not to publish a story by Times reporters that began to uncover the NSA’s surveillance activities. “Hiding that story changed history,” Snowden later told Greenwald. Not until December 2005 did the Times finally publish the story.

Snowden further grasped that a whistleblower who took his concerns to the media had to bring plenty of ammunition in the form of official documents that could not be brushed off as mere hearsay. A sitting government can usually withstand a negative story if it’s prominent for only a day or three. To capture the public’s attention and put real pressure on government, the revelations must pierce the 24/7 media babble and make news not just for a few days, but for weeks. That in turn requires not just a single exposé, no matter how sensational, but a continuing stream of newsworthy information.

Again, the Pentagon Papers proved instructive. “If you’re going to shoot at the King, you have to shoot to kill,” Ellsberg told me in reflecting on Snowden’s achievements. “The media don’t want to risk angering the King if they don’t have documentary proof.” Thus, whistleblowers who leak to the press “have to put out documents, and they have to put out a lot of them if they want to have a big effect.”

Yet even as Snowden put out a lot of documents, he eschewed the WikiLeaks model of releasing all the information at his disposal. He held back certain documents and removed specifics from others, for fear of revealing information that could put US operatives in danger or imperil legitimate security objectives. Snowden argued that democratic governance did not mean the public had to know the names of each NSA surveillance target. What it meant was that “we as Americans and members of the global community have a right to know the broad outlines of government policies that have a significant impact on our lives.” Snowden gave trusted journalists final authority to decide which parts of the information he disclosed should or should not be published. For all the attacks that critics have leveled on his supposed recklessness, his actions were carefully modulated, which strengthened their impact—and his credibility.

And their impact may soon be felt anew. Greenwald recently announced, via his column at The Intercept, that he and his colleagues were beginning “to release large batches of Snowden documents to the public—and to open the [Snowden] archive to greater access by foreign and U.S. journalists.” Again, Greenwald and his colleagues took the precaution of redacting certain names as well as inviting the NSA to comment on the documents before publication. The goal of this newly broadened access to the Snowden archive, Greenwald explained, is to “enhance public understanding of these extremely powerful and secretive surveillance agencies.”

Nothing about Edward Snowden impressed the experts at the Government Accountability Project—a Washington NGO that is arguably the world’s leading whistleblower-advocacy group and has provided legal representation for Snowden, Drake, and Crane—more than his sheer effectiveness. Yes, Snowden was courageous; yes, his revelations were eye-popping. But over the nearly 40-year history of GAP, its attorneys had counseled thousands of whistleblowers in both the public and private sectors who had displayed great courage and brought forward astonishing revelations. (See Bravehearts for examples.)

What distinguished Snowden, they said, was his ability to draw lessons from the experiences of previous whistleblowers and formulate a strategy that avoided the usual bureaucratic traps and delivered exceptional results. Of course, since releasing classified documents without authorization is unequivocally illegal, Snowden had to be willing, like Ellsberg before him, to break the law and face the consequences.

Snowden had more than one wish when he first went public. Besides alerting people around the world to the unprecedented and secret surveillance that the US government was subjecting them to, he also hoped to encourage more whistleblowing. Snowden “told me…that he wanted to show that you could come out and tell the truth about something you thought was wrong and you didn’t have to hide,” said Barton Gellman, who reported on Snowden’s disclosures for The Washington Post.

Three years later, Snowden remains committed to this goal but has clearer ideas about how to achieve it. “We need iron-clad, enforceable protections for whistleblowers, and we need a public record of success stories,” he told MacAskill. “Protect the people who go to members of Congress with oversight roles, and if their efforts lead to a positive change in policy, recognize them for their efforts. There are no incentives for people to stand up against an agency on the wrong side of the law today, and that’s got to change. We can’t fix the problems if we don’t know what they are, and for that we need whistleblowers.”