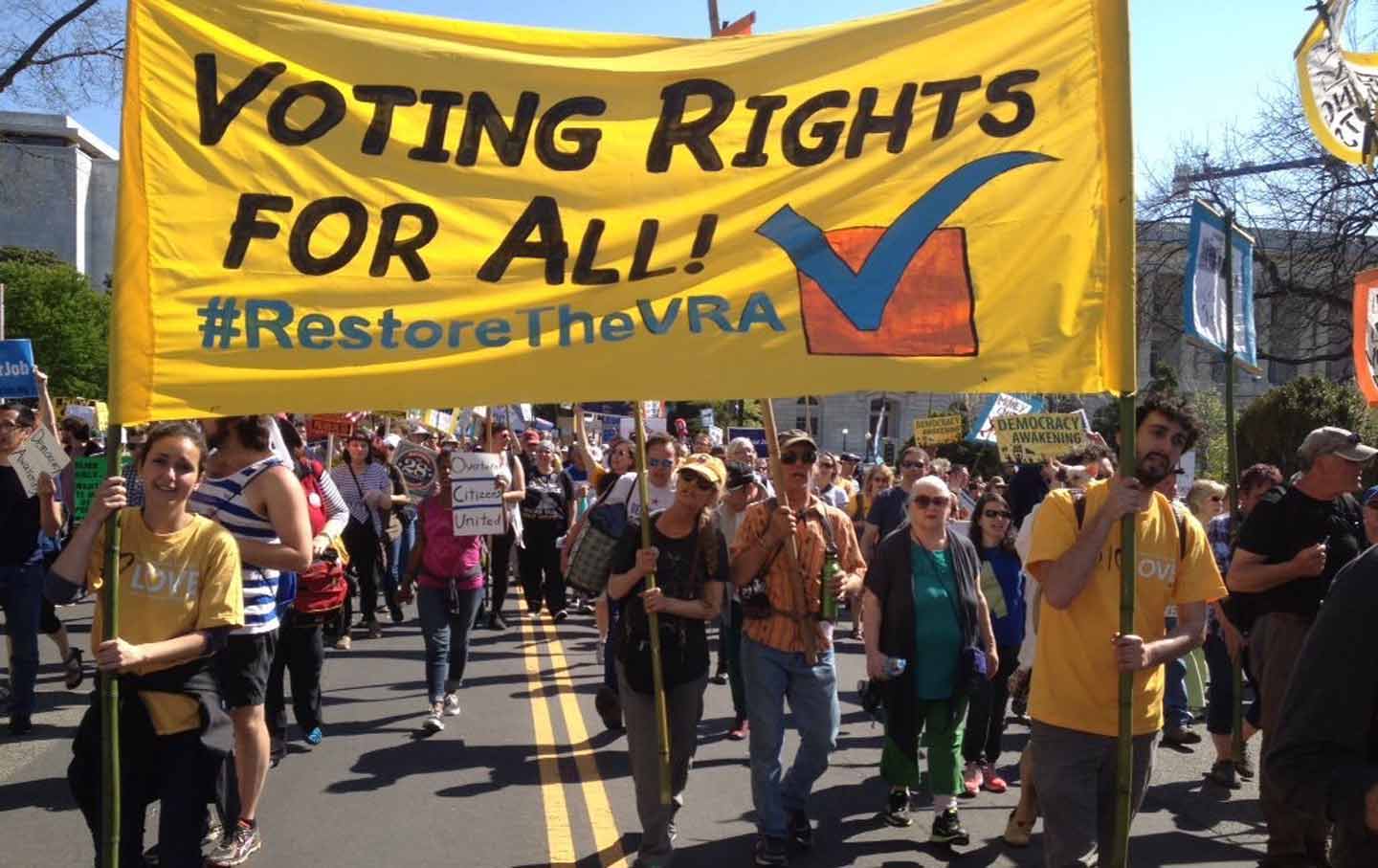 It was a beautiful day to be arrested. On Monday morning thousands marched from Washington’s Union Station to the Capitol, where a group of policemen waited in the shade. The Fugees’s song “Ready or Not” played over a loudspeaker. A man in a suit printed in hundred-dollar bills gleefully scattered fake money onto the ground, while another man cleaned it up with a pink broom painted with, “sweep big money out of politics.” “What do we want? Democracy!” the protesters shouted as they approached the Capitol. “If we don’t get it? Shut it down!”

The march and arrests were the culmination of Democracy Awakening, a weekend of workshops, rallies, speeches, and demonstrations of civil disobedience that brought thousands of activists from across the country together in DC. They are fighting to protect voting rights, to end the corrosive influence of big money on the political system and to force Republicans to confirm Barack Obama’s nominee to the Supreme Court.

“This is not a moment. It’s a movement,” said Cornell Brooks on the steps of the Capitol. Leaders of major progressive organizations were joined by teenagers who’d skipped school to risk arrest, ice cream mogul Jerry Greenfield, faith leaders, and striking Verizon employees. Past acts of civil disobedience echoed through the crowd—“We are the ninety-nine percent!” the protesters thundered as the police moved in, evoking Occupy Wall Street; as the arrests began they sang “We Shall Overcome” and “Can’t Turn Me’ Round,” freedom songs from the civil rights era.

Woke up this morning with our minds stayed on Black Lives. #DemocracyAwakens #BlackLivesMatter pic.twitter.com/3HUzsVkKis

Woke up this morning with our minds stayed on Black Lives. #DemocracyAwakens #BlackLivesMatter pic.twitter.com/3HUzsVkKis

“Civically electric” is how Brooks described the atmosphere. Over three hundred people were arrested today, bringing the week’s total to more than 1,400 arrests including the Democracy Spring protests that began last Monday. That broke the record for non-violent direct action protests in Washington for a single week. Five thousand rallied on the Washington Mall on Sunday.

Today's march on the Capitol was historic. More than 5k turned out to make their voices heard #DemocracyAwakens pic.twitter.com/F9wJFQB4lO

Brooks is no stranger to such protests—he was wearing the red robe he’d worn when he graduated from the Boston University School of Theology, Martin Luther King Jr.’s alma mater—a reminder, he said, of his place in a prophetic ministry tradition, a lineage that includes his grandfather, the reverend James Edmund Prioleau, who ran for Congress to fight voter suppression in 1946, when few African-Americans were even registered.

But the fights that Brooks’s grandfather waged have not ended. The 2016 election will be the most expensive in American history. It is the first in fifty years without the full protections of the Voting Rights Act, with new voting restrictions in effect for the first presidential cycle in seventeen. And Republicans refuse to even hold hearings on a nomination that would shift the balance of power on the Supreme Court away from the right for the first time in five decades.

So much of the media continues to treat the erosion of American democracy as a fringe issue rather than as one of the most fundamental issues in the election, which makes gatherings like Democracy Awakening and Democracy Spring so important. Not surprisingly, the same media that ignores these fundamental issues barely covered the protests that addressed them.

The breadth of the Democracy Awakening supporters makes it unique. The gathering was planned by Greenpeace, the NAACP and the Communications Workers of America (CWA), three groups with distinct memberships who have rarely worked together in the past. Now there’s a recognition that all of their priorities are connected.

“We have been struggling for these same issues—for a functioning and fair democracy, for a clean and healthy environment—for so many years,” said Annie Leonard, the executive director of Greenpeace. “I’ve been doing this work for thirty years, and I feel like we are at an incredibly unique moment, because so many people across the progressive movement have realized that what is stopping us from achieving our goals, whether it is good public education or a clean environment or racial justice, what’s stopping us is our dysfunctional democracy.”

Members of the CWA union were out in a force of several hundred, outfitted in bright red shirts. “I’m so proud of CWA-ers,” former President and Democracy Initiative chair Larry Cohen said. “A huge number of them are on strike, and many of them took arrest, and even more of them are in the crowd. They’re making the connections between the democracy movement, the state of worker’s rights in America, and their own strike,” said Cohen. “Whether you’re a Verizon striker or an amazing Greenpeace activist, people are now making these connections.”

Movement leaders agreed that what’s critical now is for people to take the energy from Capitol steps and convert it to power back in their home districts. Many of the Democracy Awakening activists held meetings with members of Congress after the protest today to push for bills like the Voting Rights Advancement Act and Fair Election Now Act that would restore the Voting Rights Act and provide public financing for elections.

Linda Suggs of Raleigh, North Carolina said she’d come to Washington to march because she was sick of “the no-doing-anything Congress.” She said, “We just can’t take it any more.” The size of the crowd made her feel hopeful, but she added, “We’ve got to keep at it—and take it to the ballot box.”

Congressman John Conyers and Barbara Arnwine wrote in The Nation recently of the need to build a strong voting-rights movement, to “rekindle the fire that forced federal action on voting rights” in the 1960s. Democracy Spring and Awakening are proof that a strong pro-democracy movement has emerged, but it’s still in its infancy. As Brooks instructed the crowd on the Capitol steps, “Stay woke.”