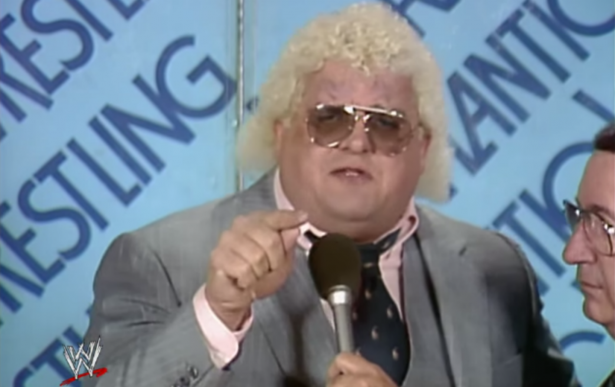 Tributes are pouring in for the late Virgil Runnels Jr. the influential pro wrestling impresario who passed away on Thursday at the age of 69. This is not a tribute to Mr. Runnels. This is a tribute to his alter ego, the man who “dined with Kings and Queens and slept in alleys eating Pork ’n’ Beans” otherwise known as “The American Dream” Dusty Rhodes.

Pro wrestling is a morality play, a violent opera that splices together broad characterization and physical action to create a unique form of mass entertainment. At its nadir, which is often, it is racist, sexist, homophobic trash, not to mention unbearably boring. At its best, you would find the prime of Dusty Rhodes: the antithesis of “this business” at its worst.

He was shaped like a Russian Matryoshka Doll, had a pronounced lisp, and dressed like someone who found the only clothes that could fit his fluid full-figured physique at Goodwill and made the best of it. The character and the man behind him grew up dirt-poor in Texas and, like all the best wrestling characters, his on-screen persona was an amplification of his true self. That meant in a 1980s cultural landscape dominated by entertainment like Dallas and Dynasty and the male body-images of Schwarzenegger and Stallone, he was an actual and undeniable working class shape and voice.

Dusty Rhodes was the most public expression about surviving in the Reagan 1980s: a Jonathan Kozol book in tights armed only with a sharp tongue and a bionic elbow. Remembering this Dusty Rhodes matters because the historical amnesia about the Reagan years has been so total. An extremely well-funded right-wing campaign has whitewashed the truth of the era: that Ronald Reagan left a body count of victims due to an indifference as callous as it was calculated. The Reagan backlash spared no one, least of all industrial workers: the people who worked with their hands and sent children to college on a single union wage, without student loans. It sounds like another world, and it was: a world that Reagan’s agenda—with no small help from congressional Democrats—destroyed. Dusty Rhodes was the voice of the person getting crushed under the weight of Reagan and keeping his head held high, dignity not only intact but non-negotiable. No, he wasn’t a labor leader or trying to do any kind of protest. He was a voice: a fake character with an authentic presence, fighting in the ring for the people being left behind. This was seen most famously in what is known as his “Hard Times” promo.

But Dusty Rhodes was no caricature, the working-class version of “Kamala the Ugandan Headhunter” or anything so ugly. Shining through “Dusty Rhodes” was Virgil Runnels, who not only grew up “Texas poor” but in the back pews of ramshackle black churches. He had something unique to the rural South, seen in the connective tissue of the Southern Baptist church: poor white people who learned how to preach from watching the black masters of the art. This was Virgil Runnels who, not unlike Jerry Lee Lewis, would sit in the black church, drawn by the energy, and soak up what he saw. Dusty Rhodes then translated that experience, bringing it to the wrestling world and in authentic fashion, had a Southern poor man’s cadence that a black audience instantly identified. This meant that Rhodes had a mass following among not only poor whites but poor blacks in the South. I remember watching Dusty Rhodes when I was a kid traveling through Georgia, staying at a hotel, and everyone—guests, workers, black and white—standing and just watching him cut his promos on a lobby television. It is no exaggeration to write that if you were trying to find points of unity in the post–Jim Crow South in the 1970s and 1980s, Dusty Rhodes was on the short list.

But this is where the story gets ugly. His “realness” in the Southern territories was mocked mercilessly in meta-fashion by his expanding Northern-based competition, the World Wrestling Federation (now the WWE), operated by boss Vince McMahon. As David Shoemaker writes in his terrific history of wrestling, The Squared Circle, McMahon created a black “slave” character named “Virgil”, owned by “The Million Dollar Man” Ted DiBiase, as a way to mock Dusty Rhodes for “‘acting black’ in speech and mannerisms.” (This was an innocent pre-Internet era when few wrestling fans could have told you that Dusty’s real name was Virgil Runnels.)

Then in 1989 when Rhodes was—like almost everyone—sucked into the WWF universe, he was dressed in yellow polka dots and McMahon had him plunging toilets and yukking it up with a black woman known as “Sapphire.” The name “Sapphire” has a long history in minstrelsy dating back to the 19th century. As described at the Jim Crow Museum of Racist Memorabilia, it marks the black woman playing “rude, loud, malicious, stubborn, and overbearing.”

In the hands of the WWF, Dusty Rhodes was turned from working-class hero to working-class minstrel. McMahon, a decade later, became a wrestling character himself, the evil boss man Mr. McMahon. He was so effective at that because it was—not unlike the old Dusty Rhodes—the amplification of his true self. Vince McMahon is a ruthless right-winger with a pathological contempt for working-class people. Dusty Rhodes, in his eyes, was a clown. McMahon took a hero and brought him low, which in many ways was an unintentionally wicked reflection of the reality of working-class life by this time. The “hard times” of the early 1980s became the new normal. By 1990, “hard times” was just “times.”

The distance had never been greater between those “dining with kings and queens” and those “eating pork and beans” and it would only widen as the years commenced. But McMahon could not erase Dusty Rhodes. Others can write about the history of conflict between generations of the McMahons and the Runnels, how they would work together off and on in the subsequent decades. Again, this piece is not about Virgil Runnels. It’s about the power of Dusty Rhodes in very dark times to make a fake character as real as can be: the last gasp of a multiracial working-class culture being smothered to death by neoliberal economics and deindustrialization. Yet if Virgil Runnels had to die, Dusty Rhodes never will. He lives on in the form of a new wrestler with a big belly and big heinie named Kevin Owens, currently taking this world by storm. He also lives on anywhere that the poor of every color can find common space and language in a culture that thrives on division. In this world of sports fakery, he was real as hunger. He was “The American Dream” Dusty Rhodes, and in so many ways, more real than the dream itself.