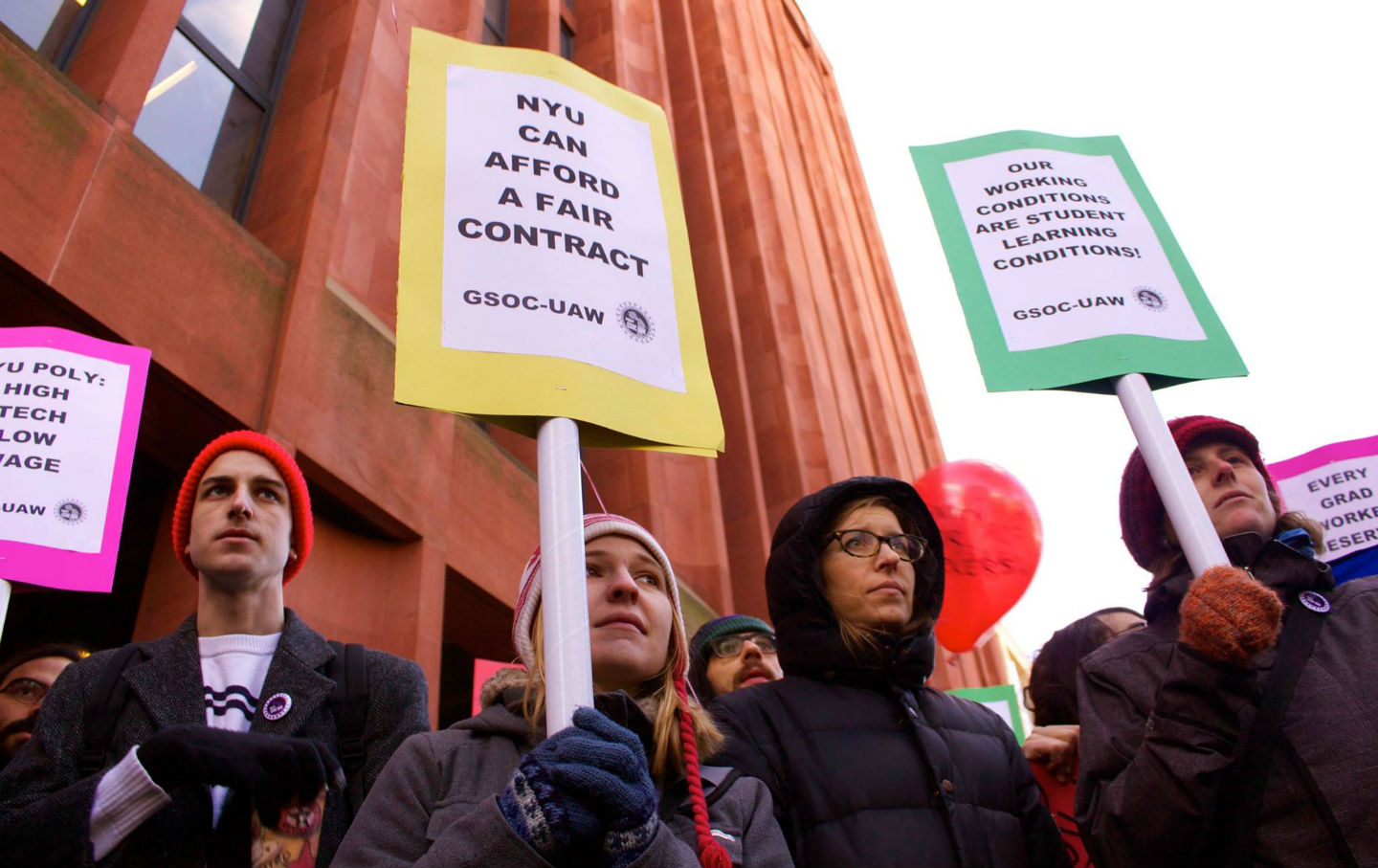 Most Americans experience the higher-education crisis in the financial pinch of their children’s tuition bill or the burden of post-college debt. But to understand how the crisis feeds into the economic crisis facing the next generation, ask an adjunct professor why she’s struggling as hard to teach as her undergraduates struggle to graduate—and why both sides of America’s academic marketplace seem priced out of both decent jobs and an enriching learning experience.

Even at Tennessee’s Vanderbilt University, considered an Oxonian academic gem in a state that ranks among the highest in economic inequality, non-tenure-track professors are fighting to form a union—the first of its kind in the right-to-work state.

Vanderbilt’s contingent faculty filed an election petition with the National Labor Relations Board in February, seeking to unionize adjunct, part-time, and full-time non-tenure track faculty, in a proposed unit covering roughly 350 faculty members in various schools, including the Divinity and Graduate Schools. But the vote, which had been scheduled for April, was set back after the administration abruptly announced that it planned to challenge the vast majority of ballots during the vote count. The move led to the withdrawal of the original election agreement, and now, pending a further NLRB review with a different unit arrangement, the workers are awaiting a rescheduled vote.

Sociology lecturer Amy Cooter believes the administration is simply obstructing what should be a neutral voting process by effectively threatening months of litigation. It’s another bureaucratic obstacle that reflects the institutional inertia that keeps many contingent faculty at the bottom of the ivory tower.

While she hopes that collective bargaining could expand access to long-term and tenure-track positions, many of the organizing committee’s concerns involve job quality: ensuring that adjuncts are fairly paid for courses, that there is consistency and equity in benefits plans across different employment tiers, and providing transparency in workplace decision-making.

To bring their working conditions more in line with those of tenured faculty, Cooter says, the value of a union is “more about quality-of-life measures, making sure people are paid a reasonable salary…making sure people have clear rules about how they’re hired or even fired, because right now most of those rules aren’t spelled out anywhere, and they’re highly subjective depending on what department you’re in.” Cotter herself is relatively fortunate; she has steady pay and a three-year contract. But like many of her young academic colleagues, since earning her doctorate a few years ago she’s been stuck on a non-tenure track indefinitely, in a glutted academic labor market that offers ever-fewer long-term positions. The uncertainties inherent in the increasingly competitive research process also affect workplace dynamics, she adds, because contingent faculty have difficulty securing funding support: Depending on how secure their contracts are, her colleagues at Vanderbilt and many other private liberal arts institutions are often reluctant to push for research funds from their departments “because it’s been made clear to them…that they have other priorities in this department, and they may face certain kinds of backlash if people don’t keep their head down and do their job.”

Publicly, the administration takes a neutral stance on faculty unionization, but it has established a website, and assembled a team of corporate lawyers, to stealthily drip negative messaging on the unionization issue across campus. The website warns that, lest instructors get the impression that a union could prevent the arbitrary reduction of their benefits and pay, “A union doesn’t have the right or power to dictate to the University the terms and conditions of bargaining unit members’ employment,” including wages, benefits, schedules, or teaching assignments.

Although Tennessee’s right-to-work laws allow faculty members to opt out of union membership and avoid union fees, the administration insinuates that simply being represented through collective bargaining potentially poses undue economic risk: “you could get more than you have today, the same as you have today or less than you have today,” and “would have to subtract union dues or fees, should you choose to join the union, to determine the net result.”

But recent national data show union representation for part-time faculty is associated typically with about 25 percent higher earnings, along with improvements in benefits and fair-scheduling protections that help stabilize workloads and income. SEIU, moreover, points to wage and benefit gains it has negotiated for contingent faculty at about 50 campuses. Unionized faculty have also bargained for clearer long-term career pathways—such as California State University system’s “preference for work system,” which provides priority consideration for promotion based on seniority. And Antioch’s faculty union negotiated health benefits covering both full- and part-time instructors, along with clearer delineation of their job duties “to keep faculty from becoming overworked.” At another Southern flagship university, Duke, contingent faculty are pressing demands for their first union contract, primarily focused not simply on compensation but on academic freedom and protection from discrimination. An ongoing fight for a union election is proceeding at New York’s Fordham University, another Jesuit institution that has become notorious for a less-than-charitable response to adjunct activists campaigning for a fair vote.

University administrators often contend that faculty unionization needlessly interferes with scholarly endeavors or academic freedom. But it is the academic labor market itself that pushes scholars into the economic volatility that demands collective resistance, to protect not just themselves but also the academic community they fear is becoming a neoliberal enterprise. So for the thousands of educators at public and private campuses, from graduate fellows to adjuncts, a fair contract is more about fairness and democratic process than about material gain.

With contingent faculty now constituting the majority of the country’s faculty positions, Cooter says, “it makes sense to at least create a space where we can talk about what our needs are and approach the admin [about how] to make this a better and more productive environment, not only for us but for the university as a whole, including our students who would benefit from faculty who don’t have to worry about finding a job at the last second in August.” They need that basic economic security to be “purely focused on their students’ experiences.”

What these educators are hoping to bargain for is more than material benefits; they want academic life to be more about the experience of learning rather than the cost of it.