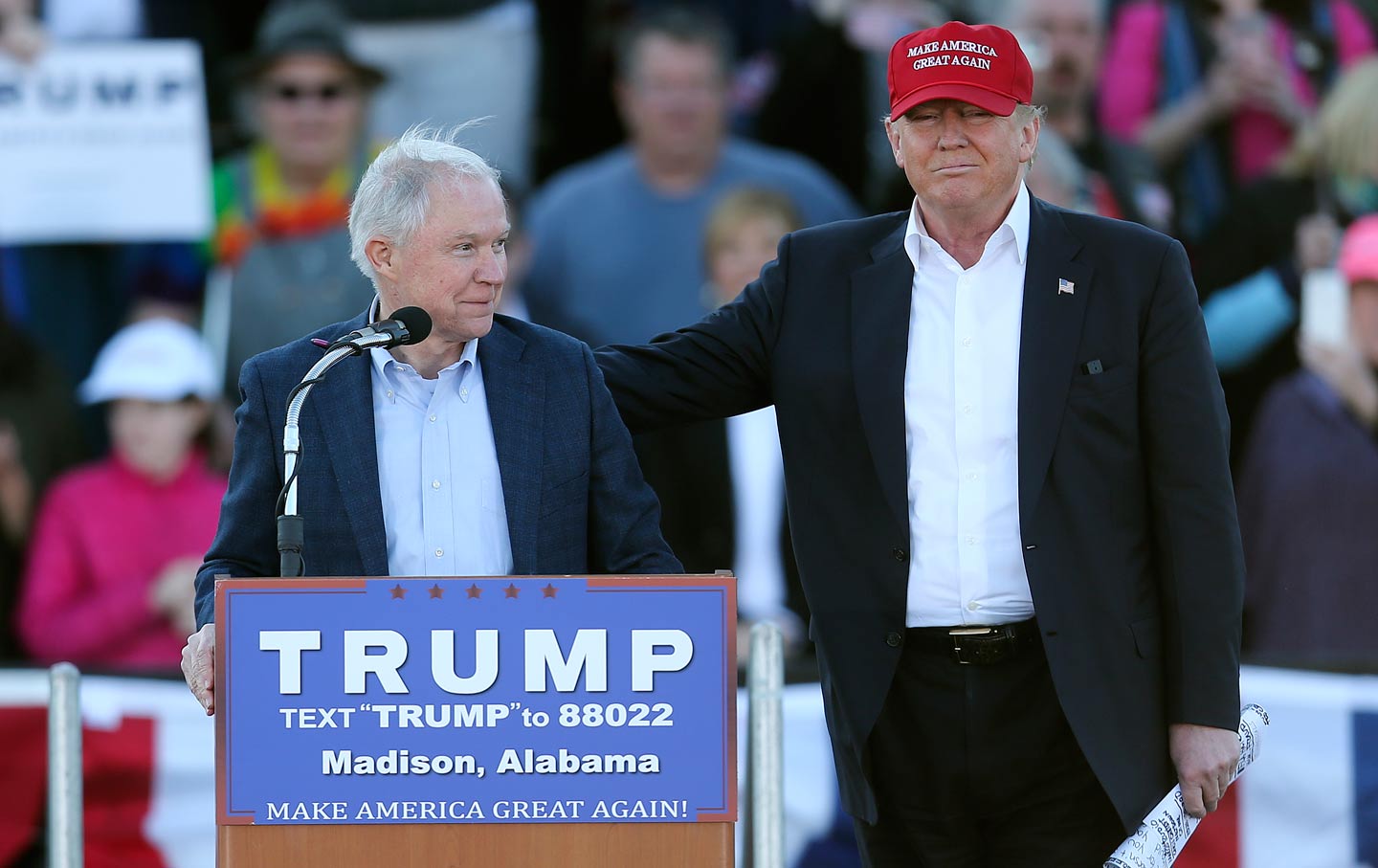 GOP front-runner Donald Trump is facing new scrutiny for refusing to disavow an endorsement from KKK leader David Duke. But over the weekend Trump received another endorsement, from Alabama Senator Jeff Sessions, that should also be cause for concern.

During a rally in Madison, Alabama, Jefferson Beauregard Sessions III became the first US senator to endorse Trump. Like the Confederate general he is named after, Sessions has long been a leading voice for the Old South and the conservative white backlash vote, now courted by Trump. Sessions has been the fiercest opponent in the Senate of immigration reform, a centerpiece of Trump’s campaign, and has a long history of opposition to civil rights, dating back to his days as a US Attorney in Alabama in the 1980s. The Senate rejected Sessions for a federal judgeship during the Reagan administration because of racist statements he made and for falsely prosecuting black political activists in Alabama.

On March 7, 1965, Albert Turner, a tall, sturdy bricklayer from Marion, Alabama, walked directly behind John Lewis during the infamous Bloody Sunday march in Selma. When Lewis fell from the force of police blows, so did Turner. “I fell down and ran,” he said. “Then I fell down again and ran some more.”

Because of Turner’s work, African Americans gained political control of many counties in the Alabama Black Belt, where you could practically count the number of black voters on one hand in 1965. But the flourishing of African-American political power in the Black Belt didn’t sit well with the old white power structure.

In the Democratic primary of September 1984, FBI agents hid behind the bushes of the Perry County post office, waiting for Turner and fellow activist Spencer Hogue to mail 500 absentee ballots on behalf of elderly black voters. When Turner and Hogue left, the feds seized the envelopes from the mail slots. Twenty elderly black voters from Perry County were bused three hours to Mobile, where they were interrogated by law enforcement officials and forced to testify before a grand jury. Ninety-two-year-old Willie Bright was so frightened of “the law” that he wouldn’t even admit he’d voted.

In January 1985, Sessions, the 39-year-old US Attorney for the Southern District of Alabama, charged Turner; his wife, Evelyn; and Hogue with 29 counts of mail fraud, altering absentee ballots, and conspiracy to vote more than once. They faced over 100 years of incarceration on criminal charges and felony statutes under the VRA—provisions of the law that had scarcely been used to prosecute the white officials who had disenfranchised blacks for so many years. The Turners and Hogue became known as the Marion Three. (This story is best told in Lani Guinier’s book Lift Every Voice.)

The trial was held in Selma, of all places. The jury of seven blacks and five whites deliberated for less than three hours before returning a not guilty verdict on all counts.

Four months later, the Reagan administration, to the astonishment of civil-rights supporters, nominated Sessions for a federal judgeship on the District Court of Alabama. “Mr. Sessions’s role in the voting fraud case in Alabama alone should bar him from sitting on the bench,” Ted Kennedy said.

Albert Turner’s brother flew to Washington from Perry County to oppose Sessions. In a highly unusual move, attorneys from the Justice Department’s Civil Rights Division also testified against him. Gerry Hebert told Congress that Sessions had called the NAACP and ACLU “Communist-inspired” and “un-American,” and labeled the white civil-rights lawyer Jim Blacksher “a disgrace to his race.” Thomas Figures, a black assistant US Attorney in Mobile, said that Sessions had repeatedly referred to him as “boy.” Figures said he heard from colleagues that Sessions “used to think [the KKK] were OK” until he learned that they were “pot smokers.” Sessions admitted to calling the VRA a “piece of intrusive legislation.”

A bipartisan coalition of senators sunk Sessions’s nomination, making him the first Reagan judicial nominee rejected by the Senate. Democratic Senator Howell Heflin of Alabama, who’d been elected with large black support, cast the decisive swing vote. “My conscience is not clear,” Heflin said, “and I must vote no.”

But Sessions hardly reformed his views after he was elected to the Senate in 1996. He frequently earned an “F” rating from civil-rights groups like the NAACP and “consistently opposed the bread-and-butter civil rights agenda,” Hillary Shelton, director of the NAACP’s Washington office, told The New Republic. He voted to reauthorize the VRA in 2006 but praised the Supreme Court’s decision gutting the law in 2013, cluelessly saying, “If you go to Alabama, Georgia, North Carolina, people aren’t people denied the vote because of the color of their skin.” (He’s clearly not paying attention to very recent examples of voting discrimination in these states.)

On February 24, Sessions spoke at a ceremony awarding the Congressional Gold Medal to the foot soldiers of the Selma voting-rights movement—some of whom he once falsely prosecuted for voter fraud. “Clearly, I feel like I should have stepped forward more,” he said. But his embrace of Trump shows that Sessions remains on the wrong side of history.