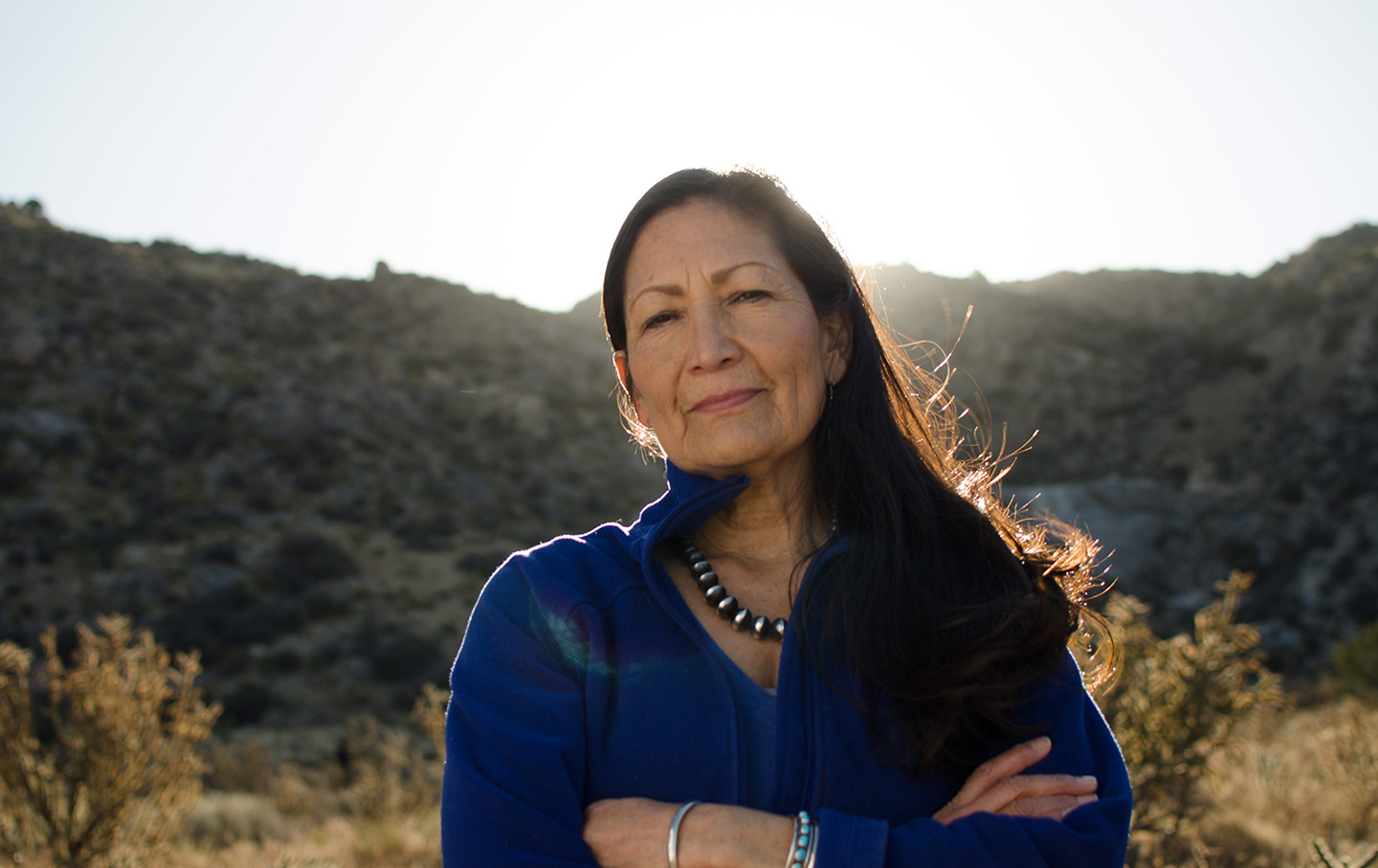 On a February evening, Deb Haaland, Democratic candidate for Congress in New Mexico’s first district and a member of the Turquoise clan of the Laguna Pueblo tribe, addressed a crowd of supporters packed shoulder to shoulder in a Capitol Hill brownstone. With stairs as a pulpit, Haaland rested a forearm on the bannister and leaned into her stump speech. “I am the only candidate who went to Standing Rock to stand with the Water Protectors,” Haaland said to cheers from the crowd. “There have been more than 10,000 members of Congress—but never a Native American woman.”1

Two months later and just a few blocks away, Paulette Jordan, Democratic candidate for Governor of Idaho, spoke to a crowd of about 30 supporters gathered at the National Indian Gaming Association headquarters. “We want to make history,” she said to the attorneys and advocates circled round. “But we also want to make change.”2

PHOTOS: Since Standing Rock, 56 Bills Have Been Introduced in 30 States to Restrict Protests

In some ways these Capitol Hill functions were unremarkable—modest meet-and-greet fundraisers in an election cycle full of them. But they represented an historic moment. If Haaland wins her tightly contested primary in her heavily Democratic district, she has a strong chance of becoming the first Native woman elected to Congress—one out of 10,945 members in United States history. Jordan, a citizen of the Coeur d’Alene tribe in Idaho and descendant of the Yakama, Colville and Nez Perce, faces longer odds. But if she wins her May 15 primary and then the election in November, she would become the first-ever Indigenous woman elected governor in the United States.3

Haaland and Jordan are riding a wave of post-Standing Rock organizing that’s aimed at helping Native women win elections. In all there are five Native women running for Congress, four running for governors’ offices and 46 running for state legislature, according to data compiled by Mark Trahant, editor of Indian Country Today. These trailblazing campaigns mark the arrival of this nation’s first peoples—and particularly first women—at the doorstep of the halls of power.4

“It gives me hope,” said Vivienna Orcutt, a councilwoman from the Hoopa Valley tribe in California. “It gives me hope for my daughters. It gives me hope for the young women in Indian Country.” Orcutt brought a group of Native women to Haaland’s event and, after hearing her speak, decided to get involved in the campaign. She’s now a dedicated volunteer who spends nights and weekends sending emails and making phone calls in the hope that come 2019, Haaland will be delivering speeches on the floor of the House of Representatives.5

Supporters like Orcutt—the people hosting fundraisers and mobilizing voters across Indian Country—are themselves an important part of this story. Overlooked and underestimated, Native communities across the continent have organized grassroots networks amidst deep social and economic inequality: Native people are the most likely to be killed by law enforcement and rank among the poorest of this nation’s poor. 6

The tribal leaders, lawyers, and activists showing up for Haaland, Jordan and other candidates cut their teeth during decades of hard-fought battles for Native rights. On my way into Haaland’s fundraiser, for example, I ran into a woman from the Nisqually tribe, a community in Washington that led protests and legal battles to secure treaty rights to the Northwest coast fishery for two straight decades, through the 1960s and 1970s. Inside, I shook hands with an elder from Nambé Pueblo, one of the 19 pueblo communities who re-took control of their education systems. Today, the All Indian Pueblo Council operates the Santa Fe Indian School, where former First Lady Michelle Obama spoke in 2016 and where my little sister is a junior in high school.7

There is a growing sense that Indigenous communities must engage political systems beyond reservations to advance their rights and interests.

In the wake of Standing Rock, the largest Indigenous protest in United States history, many of those activists have turned their attention to elections—and they’re applying lessons learned from decades of organizing around treaty rights, casinos, and pipelines. Among the Native leaders I talked to for this story, there is a growing sense that Indigenous communities must engage political systems beyond reservations to advance their rights and interests. This reorientation from tribal affairs to social movements and the ballot marks a shift for Indian Country—and potentially for national politics as well.8

Haaland comes from a working-class family. Her father served in the Vietnam War and was awarded the Silver Star for saving the lives of six men in a 1967 firefight. She grew up a military brat, attending 13 public schools before graduating from Highland High in southeast Albuquerque, New Mexico. At 15, she took a job at a bakery; every day after school and on into her twenties, Haaland decorated cakes. At 28, she enrolled at the University of New Mexico, and put herself through undergrad and law school on student loans and food stamps. (I work at 350.org, whose affiliate 350 Action has endorsed Haaland.)

“When I think about my roots as a Native woman and how I was raised by my parents and my grandparents, my values were formed pretty much when I was born,” Haaland told me. “I didn’t just decide last year where on the spectrum I was falling.” 9

Somah Haaland, Deb’s daughter, remembers her mother’s first campaign well. The Haalands were living in a one-bedroom apartment in Santa Monica, California. Deb was taking classes at UCLA. Somah was in first grade and participated in after school drama lessons at the Santa Monica Playhouse. When the theatre lost its funding, Haaland launched a campaign to save the playhouse, canvassing the community with six-year-old Somah in tow. The Haalands prevailed and the playhouse still operates today; Somah went on to major in theatre at the University of New Mexico.10

Haaland is running an unabashedly progressive campaign. She supports universal healthcare, tuition-free college, gun reform and a woman’s right to choose. In a nod to Standing Rock, Haaland uses #MniWiconi, Lakota for “Water is Life,” in her platform and calls for fossil fuels to be kept in the ground and for a transition to a 100% renewable energy economy.11

“I felt I could be an effective voice for people like me: a single mom with student loans,” Haaland told me. “If I can fight to make people’s lives better and make the role of government one where it actually lives up to its obligation to our citizens, that’s what I want to do.”12

Jordan and Haaland are part of a rising class of Native women professionals. Nicole Willis of the Cayuse and Walla Walla tribes, a political consultant who worked on the Obama and Sanders campaigns, has watched this slow build over the last decade. When Willis attended law school in the mid 2000s, Native women outnumbered their male counterparts in the Native American Law Students Association 6 to 1. “Even though we were the vast majority, we held fewer leadership roles,” Willis said. “Now we are seeing more Native people step forward and particularly Native women step forward.”13

“We’ve seen more political activism and more Native professionals realizing what it takes to advance our interests at the state and federal levels and realizing that we can do it.”

“I think it was kind of inevitable,” said Dick Trudell, a Santee Sioux tribal member who worked in Democratic circles in DC in the 1980s and 1990s and was one of the first Native Americans to earn a law degree. “We’ve seen more political activism and more Native professionals realizing what it takes to advance our interests at the state and federal levels and realizing that we can do it.”14

With the rise of Indian gaming, a $31.2 billion industry in 2016, a small subset of tribes now have the resources of a minor powerbroker. “It may pale in comparison to the corporate world,” Trudell said, “but the Natives can put up dollars.” Tribal governments and casinos are among the top funders of both the Haaland and Jordan campaigns, contributing over $30,000 to Haaland’s campaign and more than $6,000 to Jordan’s. 15

Still, despite strong support from tribes, progressive funders, and small donors, Native candidates still often face financial asymmetry with their opponents. Haaland is nose-to-nose with Antoinette Sedillo-Lopez, her closest primary competitor. Jordan, meanwhile, is being outspent in the Democratic primary 6 to 1 by Idaho businessman AJ Balukoff, who put $3.6 million of his own funds into his losing 2014 campaign.16

Native women candidates are also drawing from lessons learned during the Obama and Sanders campaigns, the first presidential bids to integrate full-time Native advisors into their campaign headquarters. Former President Obama held an annual summit for tribal leaders at the White House and became one of just a handful of sitting presidents to visit an Indian reservation when he travelled to Standing Rock in 2014. Native Americans, who tend to vote for Democratic candidates, have also strengthened their position with their party of choice, reaching the nine-party-member tipping-point to constitute a caucus in 2017, giving Indigenous voices greater representation in party politics.  17

Jodi Archambault Gillette, former special assistant for Native American affairs to President Obama, watched many of these behind-the-scenes developments from the inside. In 2016, Gillette worked for her nation, the Standing Rock Sioux, leveraging relationships with Democratic decision-makers to strengthen and elevate Native resistance to the Dakota Access pipeline. Haaland and Jordan both travelled to Standing Rock and helped advocate for the tribe with government agencies and progressive organizations.18

Gillette remembers when Haaland came to the Oceti Sakowin camp near the path of the pipeline to cook green chili stew and homemade tortillas for Gillette’s extended family. “As an Indigenous woman, we have responsibilities that are to us sacred.” Gillette said. “She gave us her traditional food. That was beautiful.”19

The path to victory for Haaland, Jordan and Native women running up and down the ballot remains arduous, but Gillette is confident. “As women we are going to get it done.”20