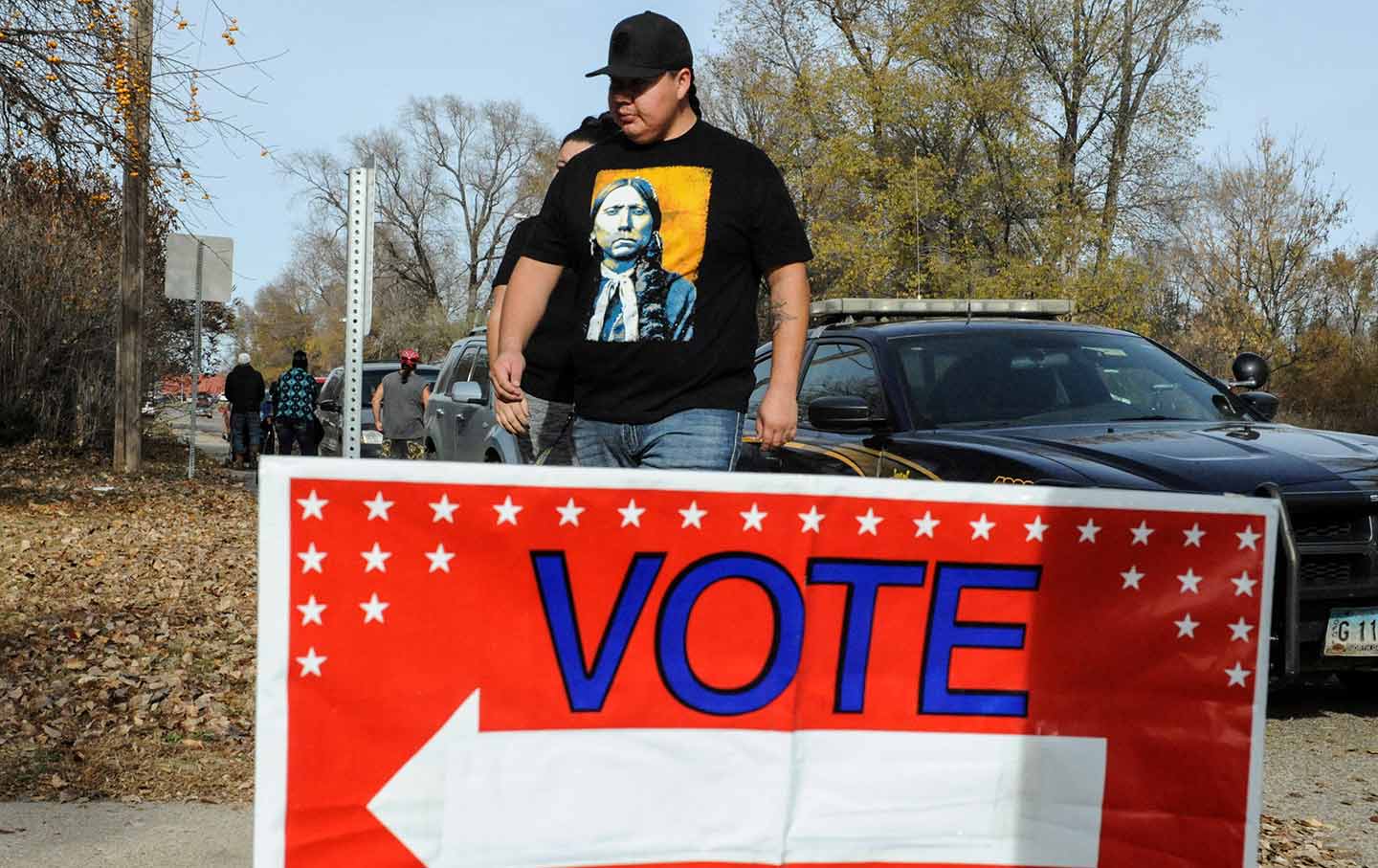 Richard Brakebill voted in nearly every election of his adult life, a point of pride that began with his return from the Navy more than three decades ago. But in November 2014, when Brakebill drove through the open farmland of the North Dakota countryside to the Rolla City Hall, a poll worker refused to let him vote.

Elvis Norquay was another reliable presence at the polls, despite being a Vietnam War veteran who bounced between homeless shelters for years. Norquay often hitched a ride into town to vote at the local Knights of Columbus Hall, where poll workers would vouch for him—that is, until November 2014, when he, too, was turned away.

Lucille Vivier had no driver’s license, let alone a car, but she almost always found transportation to her nearby polling place. In November 2014, Vivier was denied a ballot, even though one of the poll workers was someone she knew since she was 5-years-old. 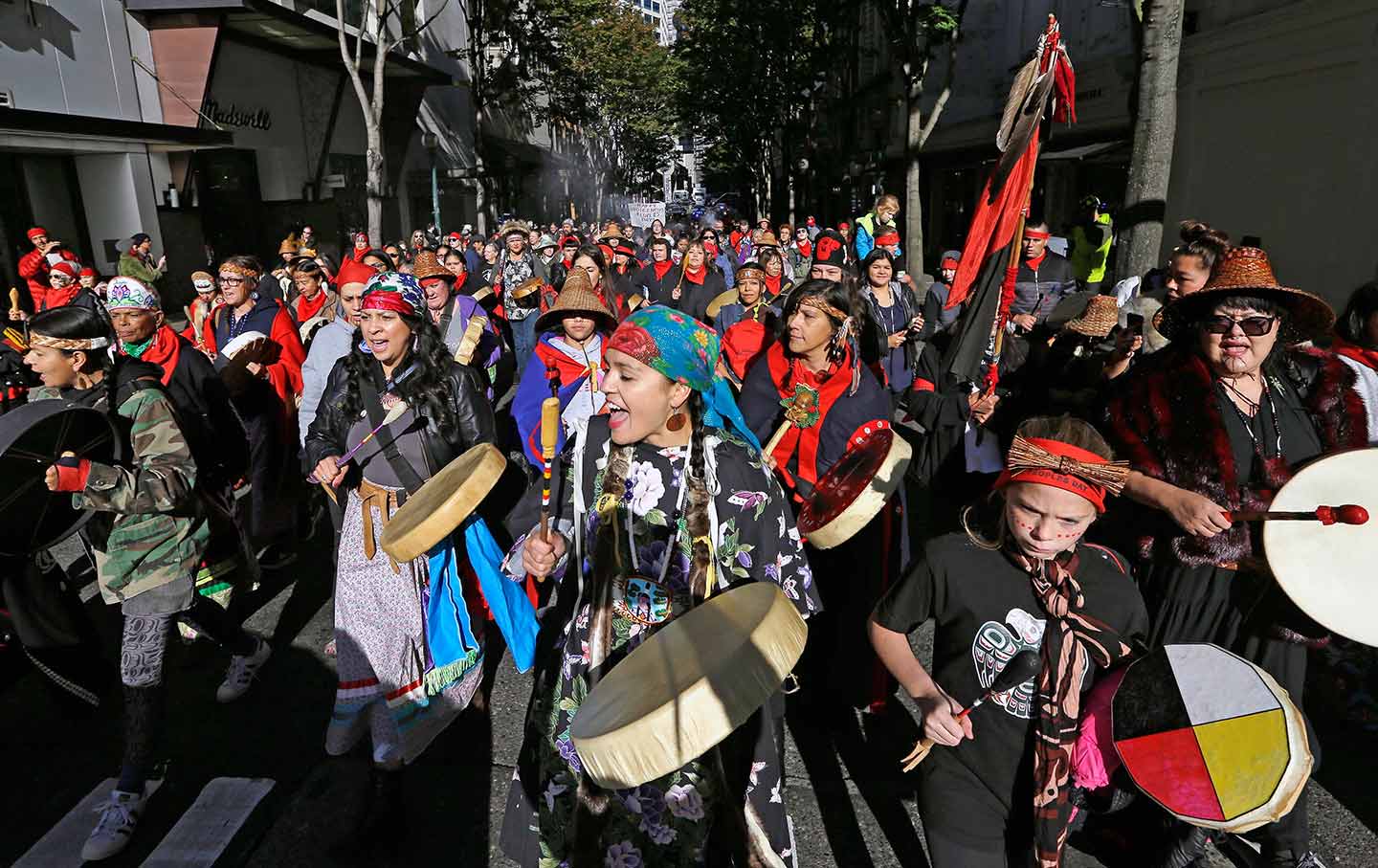 Officially, these voters lost out at the polls four years ago, because they failed to show identification, as required by a new state law at the time. But that was not the only thing the would-be voters have in common: Each is Native American, and each hails from one of the most heavily Democratic counties in this deep-red state.

Over the last six years, Republicans in North Dakota adopted a flurry of legislation that effectively revoked the right to vote for thousands of Native Americans and other Democratic voters, according to an investigation of court records, internal emails among state officials, as well as interviews with voters and lawmakers on both sides of the issue.

Six Native American plaintiffs challenged North Dakota’s law in court, including Brakebill, Norquay, and Vivier. A federal district-court judge sided with the plaintiffs in challenges to two different iterations of the state’s voter-ID laws, finding the laws’ requirements to be disproportionately burdensome on Native American voters.

In his most recent ruling in April, Judge Daniel Hovland issued an injunction broadening the range of acceptable ID for voters, calling voting a “most cherished right” for “thousands of Native Americans who currently lack a qualifying ID and cannot obtain one.”

“No eligible voter, regardless of their station in life, should be denied the opportunity to vote,” Hovland wrote.

The ruling will stand for the 2018 elections, since the state legislature does not reconvene until afterward. This should boost to the electoral prospects of Democratic Senator Heidi Heitkamp, who had the overwhelming support of tribal voters in her 2012 campaign and relied on them to help her narrowly win the election. (The ruling does include an additional wrinkle, however, as it also permitted the state to remove a provision allowing voters without ID to sign affidavits affirming their identity, a voting system that allowed college students to vote with relative ease.)

The voter-ID legislation, which North Dakota Republicans introduced within two months of Heitkamp’s unexpected victory by just under 3,000 votes in 2012, was supposed to deny ballots to double voters, non-citizens, and fraudsters, but Dan Ruby, a state representative, acknowledged that Heitkamp’s victory made it a priority. The prospect of losing an election in a state Republicans otherwise dominated—they held every statewide office and both legislative chambers—served as a wake-up call. “I think that shined a light on it in a way that it was decided that now we should fix the issue,” Ruby told me.

Ruby adamantly denied that the bill had been introduced to suppress Native American votes. “We hear the other side say, ‘They want to suppress the Native Americans from voting.’ Nobody’s said that,” Ruby said. “I’ve never heard one person say, ‘Yup, we need to keep certain people that vote against us out.’”

In practice, however, the legislation ensnared Native Americans like Brakebill, who viewed their vote as an extension of their patriotism. “I was in the service, and this is the way they want to treat me when I go vote?” Brakebill asked me.

His concern was hardly unique. After the North Dakota bill that forced voters to present ID at the polls passed, turnout declined sharply in areas with high Native American populations.

In Rolette County, home to the Turtle Mountain Reservation, voter turnout reached 45 percent in 2010, resembling the overall statewide rate. But by 2014, the first midterm election held under the new Republican voting law, voter turnout in Rolette County plummeted to 33 percent even as it held steady statewide. In effect, that translated into fewer Democratic votes that year, a big win for the state’s Republicans.

North Dakota offers a snapshot of a sweeping effort unfolding in legislatures across the country, where Republicans say they are seeking to curb voter fraud, despite a lack of evidence that such a problem exists. Judge Hovland’s recent ruling made this clear: “The reality is that the State of North Dakota in this lawsuit has failed to demonstrate any evidence of voter fraud in the past or present.”

In total, 34 states have some form of voter-ID law on the books, 13 of which were adopted since 2004. Many of the newer laws resemble model legislation drafted by conservative special interest groups like the American Legislative Exchange Council, or ALEC.

State Representative Randy Boehning, an ALEC member, was the only sponsor on all four voter-ID bills introduced since 2011. He also served as lead sponsor for the 2013 bill that a federal court barred the state from enforcing. Despite his ties to ALEC, he told me the bill he introduced has no ties to the organization.

“I’m a member of ALEC, and I’ve never used their legislation. I’ve worked with some of it, but this had nothing to do with ALEC. It was a spur-of-the-moment bill,” Boehning said. “There was no model legislation from ALEC. I know that’s the bogeyman out there, and I think that’s a crock.”

Nevertheless, ALEC had a model bill on voter ID similar to the bill Boehning introduced. Like the ALEC model, his original bill included a requirement for voters to show an unexpired photo ID to vote. Although the photo specification was removed, North Dakota’s law also removed alternative provisions that helped people who could not present qualifying ID still vote.

As the new state laws suppressed the vote in minority and Democratic-leaning communities, they have come under attack in court. Eight other states currently have pending or recently settled litigation that directly concerns the rights of Native Americans, including North Dakota, Arizona, and Nevada, which are all key battleground states in the upcoming midterm elections. In recent years, state and federal courts have struck down or weakened voter ID laws in five states—North Carolina, Pennsylvania, Texas, Arkansas, and now North Dakota.

These pending and recently settled suits may help swing pivotal elections that could determine control of both chambers of Congress. In Nevada, a 2016 ruling allowing tribal voters access to nearer polling places relied on the same provision of the Voting Rights Act that the recent ruling in North Dakota did. While the pending voter-ID lawsuit in Arizona does not focus on that section of the law, these rulings may help guide judges in defining the extent to which voter-ID laws excessively burden particular groups.

In three different legislative sessions since Heitkamp’s election, Republicans adopted bills that forced voters to present a state-issued ID with proof of residential address to vote. The most recent bill, which required voters to present their ID within six days of the election, passed last year. Taken together, this legislation took aim at two of the state’s more reliable Democratic voting bases: students and Native Americans.

College students have tended to skew more Democratic than the rest of the state population and tend to not have up-to-date state IDs, either due to their residence in dorms or the fact that they moved from out-of-state. Many Native Americans in North Dakota do not know or even have their residential addresses because they often live on reservations or in very rural areas and use P.O. boxes instead.

To Mark Jendrysik, a political scientist at the University of North Dakota, it is clear the effort was part of a concerted partisan move to stifle Democratic-leaning constituencies. “It was designed, in my view, to stop students from voting and making it difficult for Native Americans to vote, I think purposefully,” he said. “It suddenly became important after Heitkamp won. I don’t think it takes a genius to put two and two together.”

This battle over voting rights has been playing out as Heitkamp fights for reelection this fall. The election is expected to be close: President Donald Trump maintains approval ratings over 50 percent in the state, and Republicans have recruited a popular opponent to challenge her in Congressman Kevin Cramer.

It was just this sort of election-year fight that supporters of the voter-ID laws envisioned.

Emails from the North Dakota Secretary of State’s office obtained from a public records request show that the legislation’s Republican supporters did not view voter suppression as an unintended consequence. In a January 2017 email responding to concerns from a county auditor about the most recent voter-ID bill, which enabled voters to cast ballots without showing ID but still required ID to be presented within six days of the election, Deputy Secretary of State Jim Silrum, a Republican, touted the relative unlikelihood of voters returning to confirm their votes as counted as a positive selling point: “I hope the fact that many individuals who cast them will not likely come into your office later to verify their qualifications will put some of the fears to rest about long lines outside of your office in the six days after the election,” Silrum wrote.

Norquay, one of the plaintiffs in the most recent suit, said he was looking forward to voting for Heitkamp this November. Although Norquay is skeptical of the motives of those who introduced the law that prevented him from voting in 2014, he said the fact that Republicans are trying stop people like him from voting only shows how important their votes can be. “They take advantage of the lower class, like our votes don’t count or something like that,” Norquay told me. “I learned that they do. I know they do.”