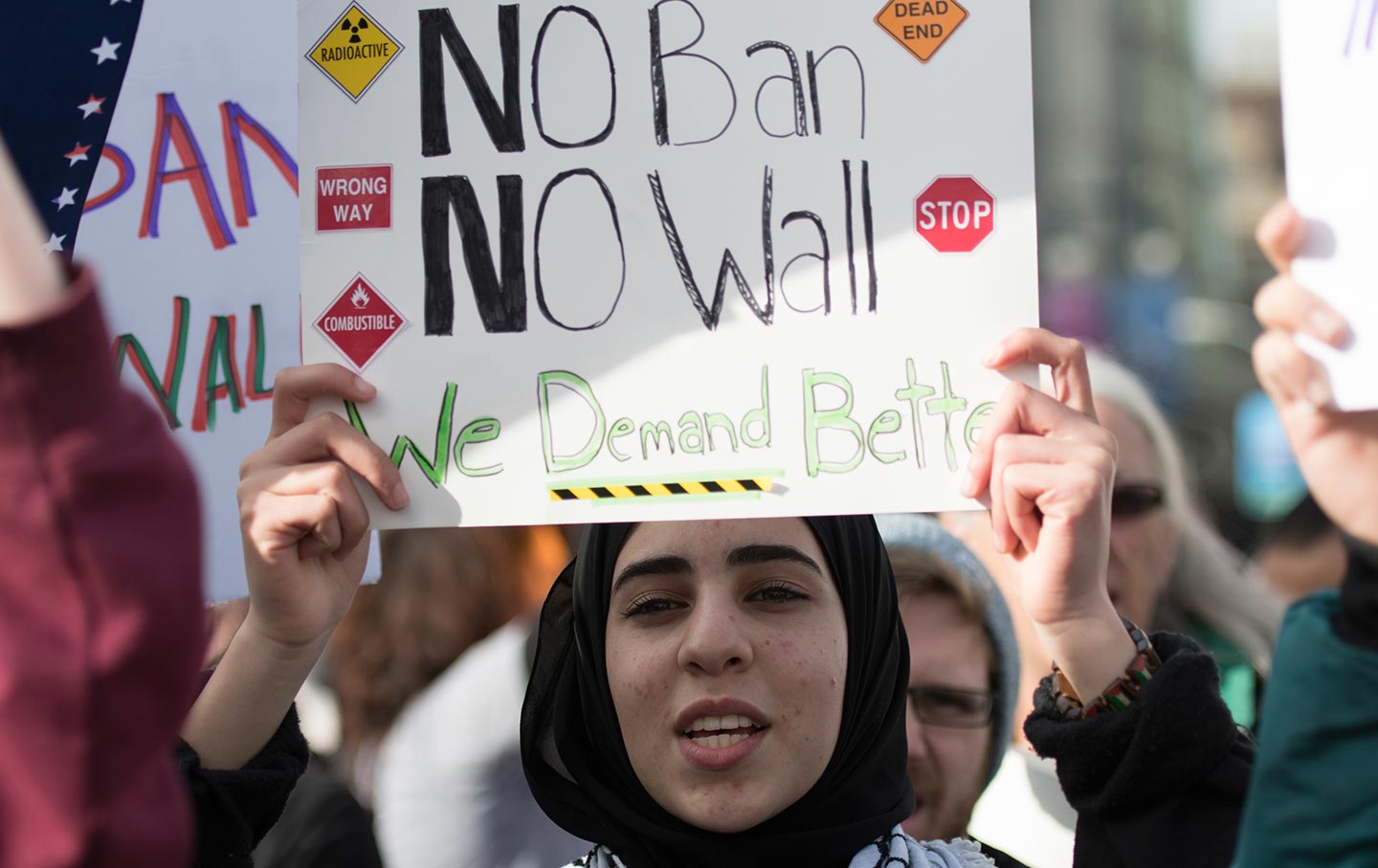 The awful irony of Donald Trump’s first 100 days as president is that a man who is still frequently described as “erratic” has governed as an entirely predictable corporate conservative—as everyone paying attention knew he would. Trump was always going to choose billionaire-ism over  economic populism. The outsider who promised to “drain the swamp” was always going to pack his administration with Goldman Sachs cronies and corporate lobbyists pushing privatization, deregulation, and austerity. The fabulist who inflated claims about his opposition to the Iraq War was always going to drop bombs and escalate conflicts. A political newcomer, Trump was always going to revert to xenophobic bombast and a permanent campaign of fear and bigotry in order to hold on to a base of supporters who will never get the security and prosperity that he promised.1

Yes, of course, Trump advisers Steve Bannon and Stephen Miller drafted an inaugural address that reflected their dystopian vision of “American carnage.” Yes, of course, White House press secretary Sean Spicer shredded his credibility on his first full day on the job, and former campaign manager Kellyanne Conway shredded her credibility on her second full day as whatever it is she does. Yes, of course, Education Secretary Betsy DeVos turned out to be incapable of discussing the basics of the system she was nominated to oversee. Yes, of course, Senate majority leader Mitch McConnell put partisanship above principle in order to secure the confirmation of DeVos, Attorney General Jeff Sessions, Energy Secretary Rick Perry, and Environmental Protection Agency administrator Scott Pruitt, as well as equally unsettling figures like his own deregulation-obsessed wife, Transportation Secretary Elaine Chao, and conservative judicial activist Neil Gorsuch, who will prove that there is space to the right of Antonin Scalia on the Supreme Court. And yes, of course, Trump and House Speaker Paul Ryan bumbled the task of repealing and replacing the Affordable Care Act because, it turned out, “nobody knew that health care could be so complicated.”2

The error made by casual observers of Trump has been a refusal to accept him for who he is: a self-absorbed and largely uninformed man entirely unprepared to assume the responsibilities of the presidency, yet entirely certain that he could gut it out. America finally has the “CEO president” that dim-witted business-channel commentators have argued that we needed for years. Like George W. Bush, the “MBA president” who screwed up everything he touched, Trump brings nothing to the White House but a certainty born of his silver-spoon upbringing and an unaccountable business career.3

The open questions on January 20 had little to do with Trump and much to do with the rest of us: Would Americans resist Trump from the start? Would they shout “No!” in the streets and in Congress, on courthouse steps and at airport terminals? The answers came quickly—and gloriously. The epic Women’s March on Washington restored the faith that many of us had lost on Election Day. Trump’s Muslim ban was thwarted not just by judges, but by immediate and massive opposition across the country. His attempt to overturn the ACA was tripped up, at least in part, by overwhelming opposition from an “Indivisible” movement that packed town halls with Americans who proudly declared that they wanted not just Obamacare, but health care as a right. Trump’s initial pick for labor secretary, Andy Puzder, withdrew because, as Puzder admitted, “the left and the Democrats really didn’t want [me].”4

But in a fight like this, success is only meaningful if it’s followed by more of the same. To continue to derail the Trump train, Americans must stay in the streets for events like the April 29 People’s Climate March. Democrats must answer the call of their base and run hard in red states like Kansas, Georgia, Nebraska, and Montana—putting in place a full-scale 50-state strategy for the 2018 midterms. These are the basics. No one should be distracted or deluded by “palace intrigue” gossip about the cabal of Goldman Sachs executives wrestling for influence with the cabal of Breitbart alumni. They have shared agendas: Bannon’s talk about the “deconstruction of the administrative state” was music to Wall Street’s ears. Democrats must press harder for investigations and oversight of those agendas—not just of ties between Trump aides and the Russian government, but of ties between Trump appointees and the corporate powers they are supposed to regulate.5

Trump’s first 100 days extended from a campaign in which he won only 46 percent of the vote. By governing from the right, Trump managed to get his approval rating as low as 35 percent in an April Quinnipiac poll. It is said that Trump has nowhere to go but up. Not true. The great lesson of these first 100 days is that, even when Republicans control Washington, resistance is possible. Now is the time to turn resistance into something more: a coherent opposition that is capable of saying “no” to Trump and holding him to account while at the same time organizing, marching, campaigning, and voting for a whole new politics that will consign crony capitalism, militarism, fearmongering, and the cruel chimera of the “CEO president” to the dustbin of history.6