The US Census Bureau’s announcement today that the number of Americans living below the poverty line fell between 2014 and 2015 is good news. But before we get too excited, it is worth noting that the federal poverty line was a meager $12,000 for a single person living alone in 2015 (and only about $24,000 for a married couple living with two children).

If your initial reaction to that is “whoa, that’s waaay too low for a person to lead a minimally decent life on in the USA,” then you’re in good company. In a recent survey conducted by the conservative American Enterprise Institute (AEI) and the Los Angeles Times, Americans were asked, “[What is the] highest annual income a family of four can have and still be considered poor by the federal government.” The average response was $32,293—an amount 34 percent higher than the current federal poverty measure.

In short, conservatives did a poll on how much income it takes to avoid poverty, and the answer they got back was more than $8,000 above the federal poverty line.

The wonks reading this might be thinking “well, if the federal government says a married couple with their two kids only needs $24,000 to live a minimally decent life, then they must have good reasons to think this is enough.” I’m a bit wonkish myself and generally trust official government statistics—but the federal poverty measure is a big exception. 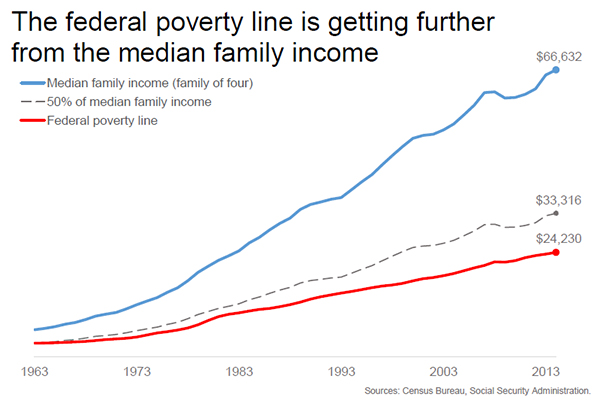 That means to be officially counted as poor today, a family has to be much poorer compared to the typical American family than it had to be in 1963. In fact, if the federal poverty line today was set at the same place relative to median income as it was in 1963 it would be about $33,000, rather than $24,000.

The AEI survey results are not a fluke. We know from decades of evidence that the public’s understanding of the income needed to avoid poverty increases over time at a rate faster than inflation, and closer to the increases in mainstream incomes and living standards.

So why hasn’t the official poverty line been adjusted over time in a way that reflects the public’s more accurate understanding?

The reasons for this are largely political.

In the early 1960s—around the time when the Beatles were just becoming famous here—Mollie Orshansky, an employee in the Social Security Administration (SSA), developed working estimates of what it meant to be poor at that time.

The data available to Orshansky wasn’t particularly sophisticated, or even timely. For example, she based her estimates in part on a food-consumption survey conducted in 1955. When the federal government started using her calculation of the poverty line in the mid-1960s, Orshansky and federal officials understood that it would need to be adjusted over the long term for increases in mainstream living standards. The SSA “made a tentative decision early in 1968 to adjust the poverty thresholds for the higher general standard of living.”

But then two things happened that year. First, officials in the Johnson administration prohibited the SSA from making this kind of adjustment, likely in part due to concern that the updated figures would show an increase in poverty. Second, Richard Nixon was elected president. After he took office, his budget office issued a directive making the Orshansky thresholds the “official” poverty measure, and specifying that they would be adjusted for inflation only.

In 1970, Orshansky said this decision would likely “freeze the poverty line despite changes in buying habits and changes in acceptable living standards.” There have been repeated recommendations to reform the poverty measure since then, but no president has been willing to revise the Nixon directive.

We should dump the current official poverty measure and replace it with two different measures.

The Census Bureau has an alternative measure of poverty, the Supplemental Poverty Measure, which improves the current federal poverty measure in many respects. But even this approach puts the poverty line at about $25,000 to $26,000 for a family of four—and that’s still too low.

Here’s a better approach: dump the current official poverty measure and replace it with two different measures. One measure would be anchored to half of the typical (median) American family’s income in 2016 and then adjusted for inflation over time; the other would be set at the same level initially, but adjusted annually using the median income over a 5-year period. This way, the poverty line won’t drift away from mainstream living standards of living over time.

It’s 2016: We need a poverty measure that reflects what the public thinks is required to meet basic needs in Beyoncé America. But instead we’re stuck in Beatlemania America—and that needs to change.