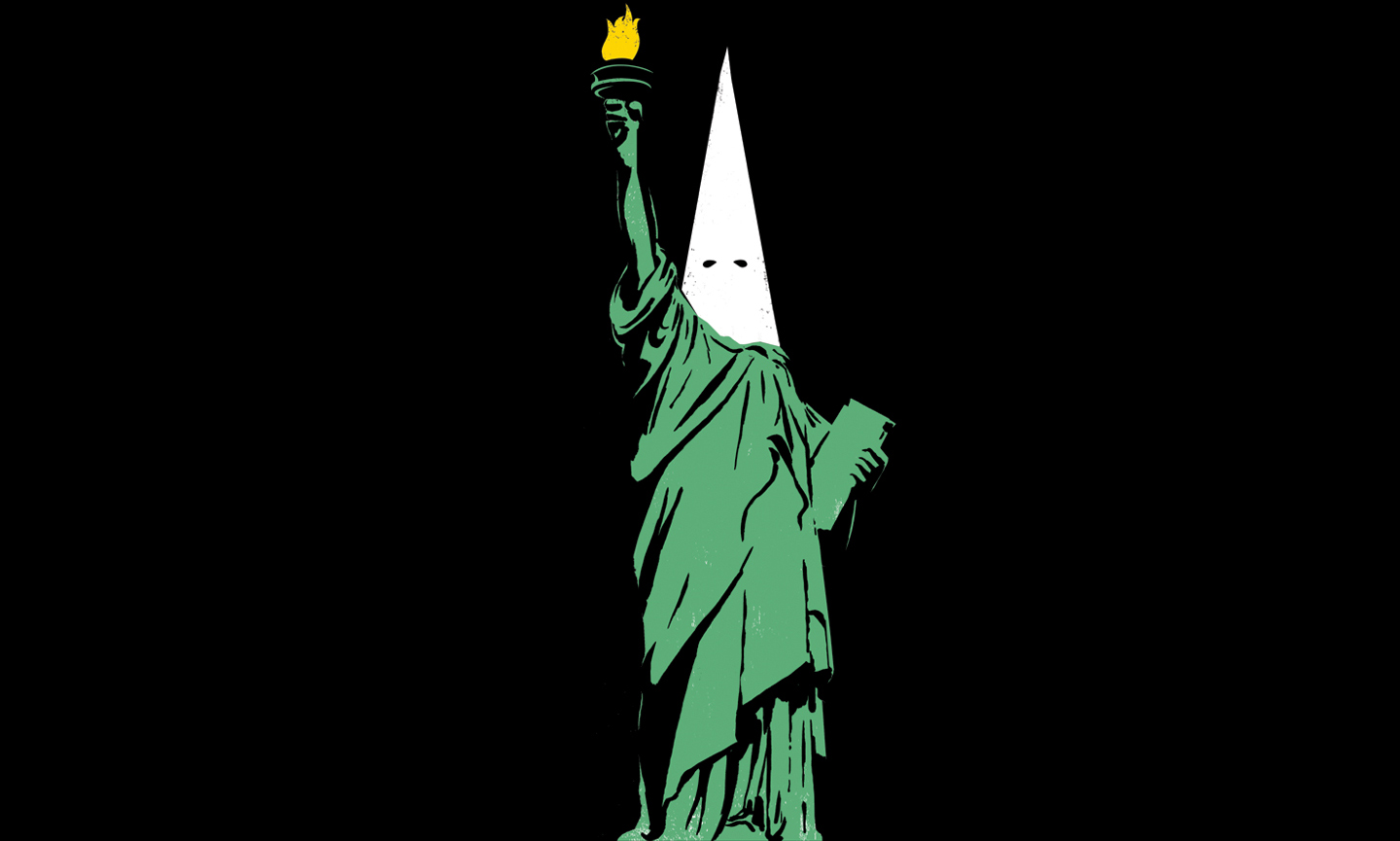 Why now? in trying to make sense of Trump’s effective use of racism to win the presidency, many have pointed to a long tradition of dog-whistling, reaching back decades. Trump is the nationalization of Nixon’s Southern strategy, the shadow cast forward by Reagan’s welfare queens and George H.W. Bush’s Willie Horton. Writing before the general election, Slate’s Jamelle Bouie linked Trump’s politicized racism to his predecessor’s upending of the racial hierarchy. After the vote, Ta-Nehisi Coates described Trump as the country’s first white president, in that whiteness is a negation of blackness, and Trump’s driving passion seems to be a desire to negate the legitimacy and legacy of Barack Obama, the country’s first African-American president.1

Coates’s point is profound, especially when read against those moral philosophers who say the right to political sovereignty can be claimed only by those who possess emotional sovereignty. “Self-command, self-possession,” Woodrow Wilson wrote in 1889, are the pillars of America’s exceptionalism. Setting Trump aside for the moment, Wilson—the man who segregated the federal civil service, celebrated the Ku Klux Klan, and launched a racist counterinsurgency in Haiti—must be considered among the whitest of white presidents. He believed that individuals qualified for political self-rule through personal self-rule, demonstrating that they could use virtue and reason to regulate passion and impulse. “Government as ours is a form of conduct,” he said, “and its only stable foundation is character.” Along with his predecessors and contemporaries, Wilson associated the virtue of self-regulation with white skin, contrasting property-possessing, self-commanding sovereigns with their opposites: unself-governable people of color. They imagined—in fantasies that fishtailed wildly between nostalgia and wrath—that African Americans, Native Americans, Mexican Americans, and Mexicans were immature, childlike in their emotions and unable to distinguish between true liberty and licentiousness, between the pursuit of happiness and lust.2

In a way, then, according to America’s color-coded guide to political virtue and vice, Barack Obama might be considered the country’s only white president, in the sense that he served almost as a Platonic ideal of ancient moral philosophy. In office, he was preternaturally self-governed and self-regulated—Vulcan-like, as some said, and in control of his emotions, especially his anger. This self-regulation is a burden of race, which must have weighed heavily on Obama, being not just the first African-American president in US history but also one who took the office during a moment of extraordinary economic and military crisis.3

Trump, by contrast, is all id and pure appetite, unspooling raw, insatiable, childish hunger every night on Twitter. He’s the most unregulated, unself-governed president this country has ever had, an example of what happens to the psyche of rich white people after four decades of economic deregulation. But white folks—at least powerful ones—get to decide the exception to the rule. (“Some of the virtues of a freeman would be the vices of slaves,” as one 1837 defense of slavery explained.) And that’s what makes Trump the whitest of white presidents: He can openly tweet-mock moral conventions that hold that only those who demonstrate self-sovereignty are worthy of political sovereignty and still be the sovereign.4

But to get back to Trump’s psychic deregulation and Obama’s overregulation: Both are responses to what came before. Why now? Because the frontier is closed, the safety valve shut. Whatever metaphor one wants to use, the ongoing effects of the ruinous 2003 war in Iraq and the 2007–08 financial meltdown are just two indicators that the promise of endless growth can no longer help organize people’s aspirations, satisfy their demands, dilute the passions, contain the factions, or repress the extremes at the margins. We are entering the second “lost decade” of what Larry Summers calls “secular stagnation,” and soon we’ll be in the third decade of a war that Senator Lindsey Graham, among others, says will never end. Beyond these compounded catastrophes, there is a realization that the world is fragile and that we are trapped in an economic system that is well past sustainable or justifiable. As vast stretches of the West burn, as millions of trees die from global-warming-induced blight, as Houston and Puerto Rico flood, the oceans acidify, and bats and flying insects disappear in uncountable numbers, any given sentence from Cormac McCarthy’s The Road could be plucked and used as a newspaper headline. (“A Vast Landscape Charred, and a Sky Full of Soot” ran the headline for a New York Times report on California’s wildfires.)5

In a nation like the United States, founded on a mythical belief in a kind of species immunity—less an American exceptionalism than exemptionism, an insistence that the nation was exempt from nature, society, history, even death—the realization that it can’t go on forever is traumatic. “You forget what you want to remember,” McCarthy wrote in The Road, to capture the torment of living in the postapocalypse, “and you remember what you want to forget.” It’s a good description of how those steeped in a definition of freedom as freedom from restraint must have felt living in Obama’s America, when they rejected with a racist fury even conservative, corporate-friendly policy solutions to the multiple crises of health care, climate change, inequality, and immigration.6

This ideal of freedom as infinity was only made possible through the domination of African Americans, Mexican Americans, Mexicans, Native Americans, and Chinese, as slave and cheap labor transformed stolen land into capital, cutting the tethers and launching the US economy into the stratosphere. And now, as we are all falling back to a wasted earth, the very existence of people of color functions as an unwanted memento mori, a reminder of limits, evidence that history imposes burdens and life contracts social obligations. That many Latino migrants come from countries where democracy means social democracy—and that, once here, they revitalize cities and join unions—only inflames the right-wing backlash. Social rights, within the libertarian framework of American freedom, symbolize much more than mere economic restraint. They invoke the ultimate restraint: death. An implied conflation of social rights, race, and mortality was what made, for some, the “death panel” line of attack on Obamacare effective.7

Maybe, then, Obama’s personal overregulation served as an intolerable aide-mémoire for the social destruction wreaked by years of financial and trade deregulation presided over by his white predecessors. The collective response (by a minority of voters) was to transmute the fear of death into a drive unto death, electing a president whose psyche is decomposing before our eyes to finish the job of deregulation. The tax bill is Trump’s Enabling Act—or, better, Disabling Act—ensuring that whoever comes next can’t reverse course.8

Trumpism is a death cult. It counts among its priests a sheriff who tortured the poorest among us. Its saints are the victims of colored crime, and its sinners are African Americans (living reminders that American freedom was made possible only by American slavery), Latino migrants (themselves the victims of decades of trade deregulation, who come bearing a political tradition that says health care, education, and human dignity are human rights), and refugees from regions devastated by US militarism. But the cult has proved so confounding—which partly explains why those who dismiss it as immoral buffoonery find it hard to come up with an effective alternative—because what came before was also a death cult.9

Trump’s national chauvinism is often presented as the opposite of postwar internationalism, which it is. But US-led internationalism during its golden age was profoundly skewed. It held up an ideal of formal universal equality among nations even as, according to the Sierra Club’s calculations, the United States, “with less than 5 percent of world population,” consumed “one-third of the world’s paper, a quarter of the world’s oil, 23 percent of the coal, 27 percent of the aluminum, and 19 percent of the copper.” Our “per capita use of energy, metals, minerals, forest products, fish, grains, meat, and even fresh water,” which all increased by a factor of 17 between 1900 and 1989, “dwarfs that of people living in the developing world.” It took an enormous amount of violence—in Southeast Asia, Africa, the Middle East, and Latin America—to maintain those numbers, and the pretense of calling this arrangement “universalism” could only be maintained so long as the promise of endless economic growth remained credible.10

Trump won by running against the entire legacy of the postwar order: endless war, austerity, “free trade,” unfettered corporate power, and inequality. A year into his tenure, the war has expanded, the Pentagon’s budget has increased, and deregulation has accelerated. Tax cuts will continue the class war against the poor, and judicial and executive-agency appointments will increase monopoly rule.11

Unable to offer an alternative other than driving the existing agenda forward at breakneck speed, Trumpism’s only chance at political survival is to handicap Earth’s odds of survival. Trump leverages tribal resentment against an emerging manifest common destiny, a true universalism that recognizes that we all share the same vulnerable planet. He stokes an enraged refusal of limits, even as those limits are recognized. “We’re going to see the end of the world in our generation,” a coal-country voter said in a recent Politico profile, explaining what he knows is his dead-end support for Trump.12