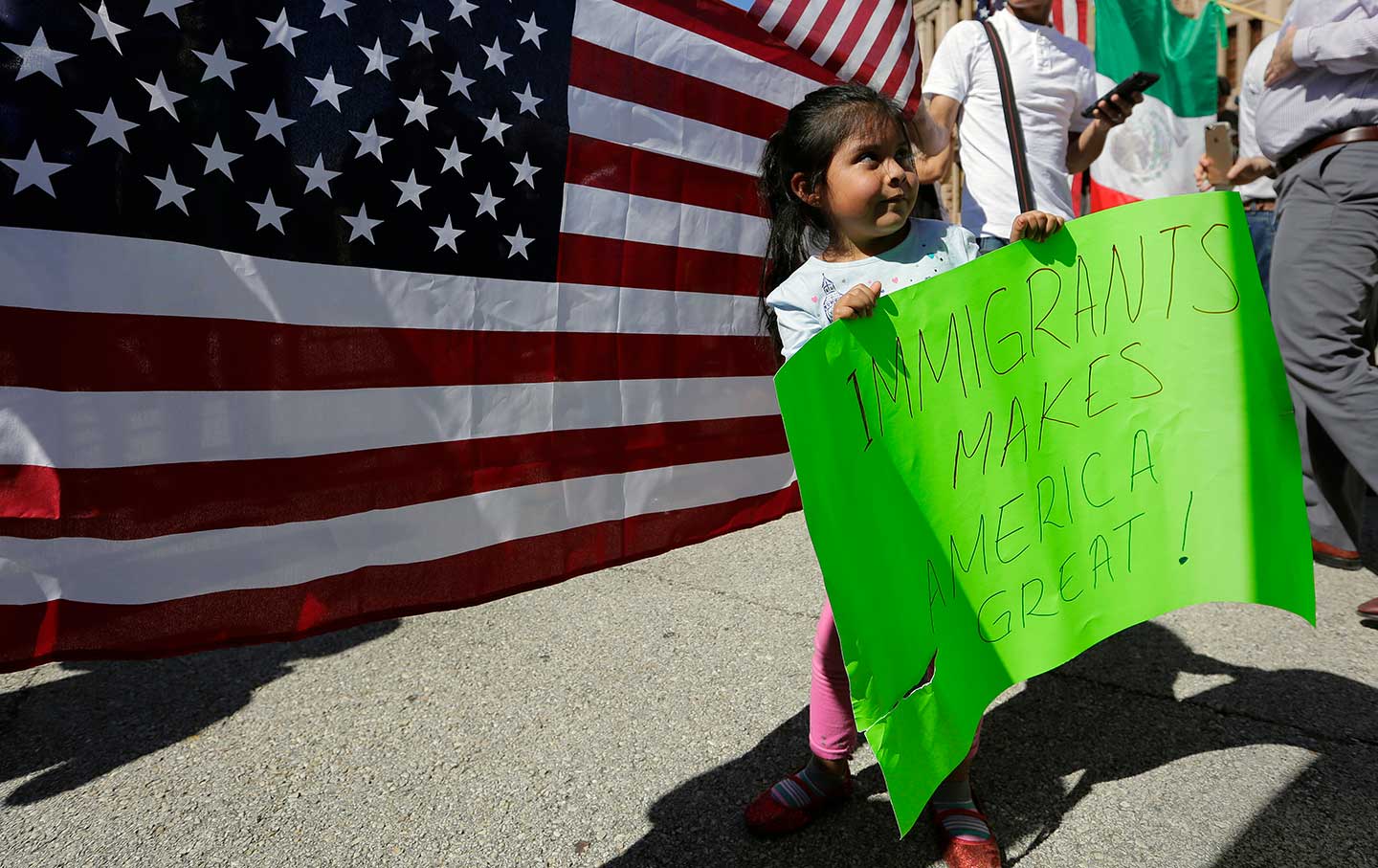 Yaretzi Perez, 4, holds a sign as she marches with her family at the Austin, Texas rally of a Day Without Immigrants, February 16, 2017. (AP Photo / Eric Gay)

President Trump is notorious for his singularly ravenous appetite for power. But this May Day, the workers who are struggling to put food on our tables are biting back with a vengeance.

The protests and strikes flooding the streets today are powered by communities that have been particularly ferociously attacked by Trump: people of color, migrant workers, low-wage workers and fast-food and service workers with the Fight for 15 campaign. These movements reflect the parallel and intersecting currents of American labor radicalism, and the global momentum of International Workers Day.

Many of the leading groups are striking for migrant rights. A call for mass strikes involving hundreds of thousands of workers and scores of cities was declared at a DC rally, led by the Food Chain Workers Alliance, California’s SEIU service-workers union, the Fight for 15 movement, and other regional and national labor groups.

How to Join the ‘Day Without Immigrants’ on May Day

Monday’s May Day Marches Could Be the Biggest in Years

Food-chain-worker organizer José Oliva proclaimed: “Without workers, who does Trump think will harvest the crops, craft the food, transport it to market, stock the shelves, cook in kitchens, and serve the meals?”

The answer ringing out from working-class communities attests to a deep legacy of migrant and transborder struggles forming the backbone of labor. Because the food chain and migration are so intertwined, food-chain workers are a core inspiration for this year’s Day Without Immigrants.

The Fight for 15 is relatively youthful, spawned from a scrappy wildcat strike at a Manhattan McDonald’s in the winter of 2012. But after five years of mushrooming wildly around the world, the campaign’s demands for a living wage and organizing rights have now entered everyday political discourse. The movement has already won a path to a living wage for millions of workers through various state- and company-level measures nationwide, and Congress is now weighing a new legislative proposal for a $15 minimum hourly wage and hike in the tipped wage for restaurant and service sectors.

Though still not a living wage in most places, the campaign’s call for $15 an hour harnesses the energy that has been unleashed by the post-recession unrest. The movement has won support from Silicon Valley tycoons, Black Lives Matter activists, and progressive officials. If a nationwide $15-an-hour minimum wage were achieved, food service and production as well as related industries like hospitality and logistics would see some of the largest wage boosts as a result of more than doubling the current, massively outdated federal $7.25 wage floor.

The fast-food workers’ initiative has spun off into other pro-migrant labor campaigns. At New York’s Tom Cat Bakery, the employees threatened with mass firings at their Queens-based factory are fighting back. At a recent rally at Trump Tower, the prelude to today’s May 1 actions, Hector, a veteran Tom Cat baker, stood firm on the picket line, backed by city officials, Yemeni bodega owners, and union activists.

“I’m just gonna say [to] Donald Trump and the Government that we are not criminals like they say, we are good people, hard workers,” he said. Yet he was fighting not for Trump’s sympathy but for the job he is entitled to. “I love to do my job…. This is why we are here. To fight. We’re going to stick together… We just started to fight.”

Local restaurant owners will also join today’s protests in solidarity, representing a growing group of liberal-minded bosses opposing Trump. With its “Sanctuary Restaurants” program, Restaurant Opportunities Center-United is campaigning for owners to make their May Day Special a full or partial work stoppage, or full-throated support for workers who protest today.

In a rare alliance, immigrant pushcart hawkers with the Street Vendor Project will line up with posh restaurateurs to show that New York’s ethnic-street-food impresarios will defend their turf against Trump’s anti-immigrant policies—not to mention against the gentrification that Trump’s real-estate cabal continues bankrolling across the city.

Further northward, in Vermont, migrant farmworkers from south of the border with the advocacy group Migrant Justice are pushing the hippie ice cream brand Ben & Jerry’s to sign into their “Milk with Dignity” program.

Activists have sought for two years to broker the binding contract, which provides for dignified working conditions, anti-discrimination protections, workplace-organizing rights, and decent schedules. Organizer Enrique “Kike” Balcazar, who was himself recently arrested by federal agents, says ICE appears to be putting the squeeze on local dairy workers as a way of intimidating a militant pro-migrant movement. So their fight for Milk with Dignity is even more vital and “visible,” he says, to “protect workers in their supply chain from violations of their human rights, because that’s particularly important when we’re living under a government that has no respect for Human rights at all.”

Another food-chain link mobilizing today is the office-canteen staff in Silicon Valley. Maria Elena Durazo, UNITE HERE’s vice president for civil rights, diversity, and immigration and a daughter of Mexican-American farmworkers, sees the fight for global justice embodied in the struggles of both union and non-union workers that UNITE HERE supports in the Bay Area. May Day was a platform for the union and other economic-justice groups to push tech companies to support workers engaging in strikes and other actions. Facebook and other tech firms recently agreed not to punish those who participated; other employers reportedly remain reluctant.

For the union, “the opportunity for May Day was to push the conversation with employers…not only push back on Trump,” Durazo tells The Nation, “but also raise the expectation that employers should be supporting their immigrant workforce…. And speak[ing] out in their defense.”

UNITE HERE is also working to secure long-term, workplace-based legal and social commitments from employers to protect immigrant employees, including refusing to voluntarily enforce federal work-authorization policies or complying with warrantless workplace audits, and adhering to nondiscrimination principles for the undocumented. “This is a long term commitment,” Durazo adds, “and I’m proud that our union is way out there up front publicly, but also behind the scenes, in the day-to-day work [or organizing] the housekeepers, dishwashers, and airport workers… Every day they’re going through these struggles and battles, and we never hear about them…the real grind is every single day behind the scenes there.”

May Day, though, isn’t about what Trump thinks, or even what bosses say. It’s about what workers do. The Donald, perhaps in spite of himself, is indeed proving a great unifier, but in an unexpected way: by sowing the seeds of a unique new resistance. Against the billionaire boss in Washington, workers nationwide and across borders are going past bread-and-butter demands on May Day to demand a real premium on economic justice.

In New York, a day of various protests across the city concluded with a rally at Foley Square in Manhattan. Public advocate Tish James led the crowd with chants of “Resist! Resist!” Despite the pressures local officials have been facing from an increasingly hostile White House, James vowed to push back against any federal budget plans that would “prioritize the rights of billion-dollar corporations,” and stressed “the power of the people that comes from the ground up. And when the ground rises and rocks and shakes, then there’s nothing that we cannot do.”

Yet Carlos Martinez, an organizer with the Brooklyn-based Make the Road New York, noted that despite encouragements from city officials who have proclaimed New York a “sanctuary city,” fear in his neighborhood was rife. Many employers, he said, were “taking advantage” of immigrants’ legal uncertainties and “using this for their profits.” And there remain concerns about local law enforcement’s supposed policy of not cooperating with Trump’s immigration crackdown. Martinez recalls that under the police’s past policy of stop-and-frisk, he had had a run in with police in his own community, as a middle-aged, US-born veteran.

“I think it depends on what neighborhood you’re in.”

But as the throngs of New Yorkers chanted “No Se Puede!” to the president, it sounded like a warning to Trump himself that he might be the one messing with the wrong neighborhood today.