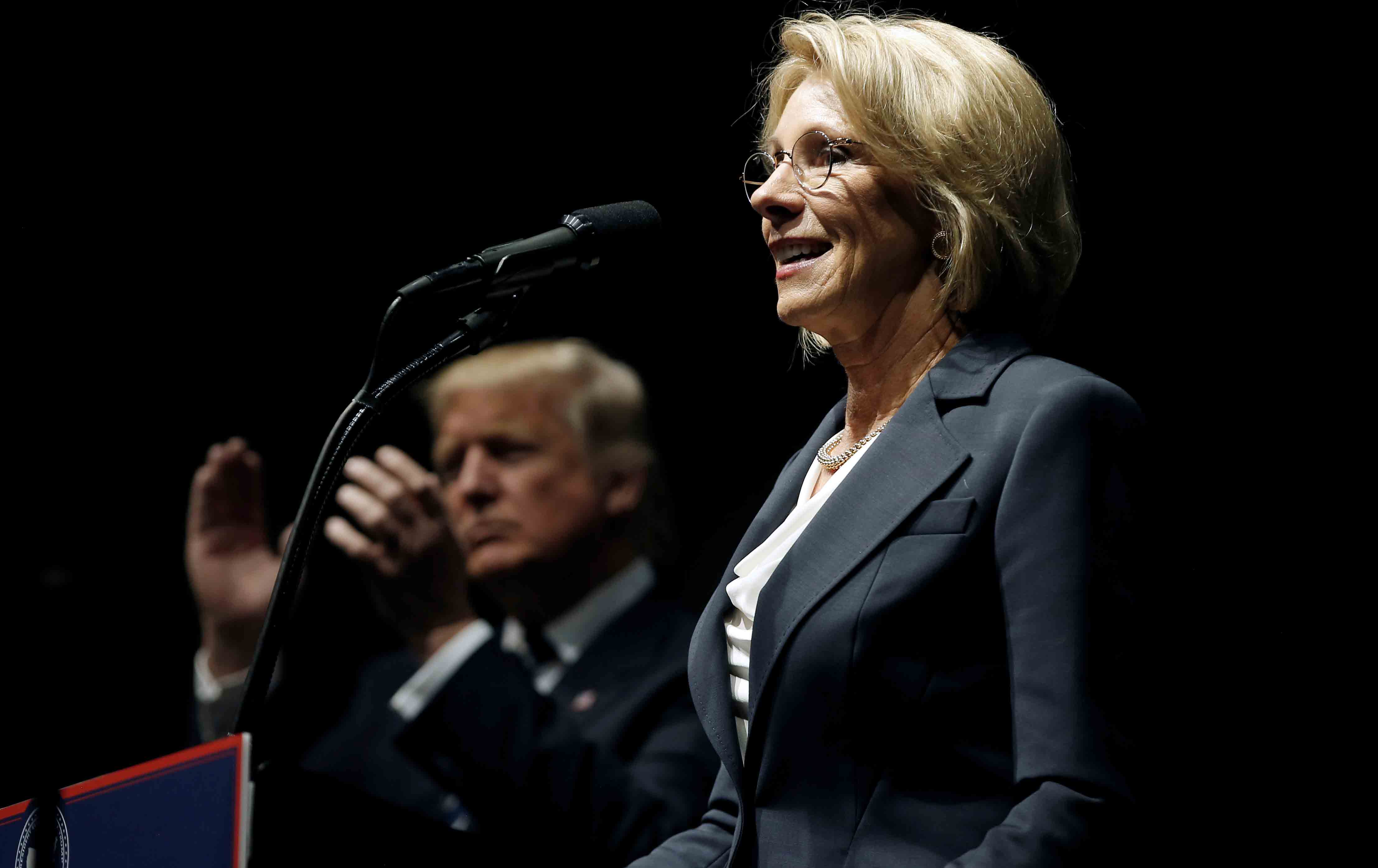 Betsy DeVos, whose nomination for secretary of education will be reviewed by the Senate Health, Education, Labor, and Pensions Committee on Tuesday, has never taught in a classroom. She’s never worked in a school administration, nor in a state education system, nor has she studied pedagogy. She’s never been to public school, and neither have her children. She has no record on higher education, except as an investor in the student-loan industry, which the Department of Education oversees. As Massachusetts Senator (and HELP Committee member) Elizabeth Warren wrote recently, there is “no precedent” for an education secretary with DeVos’s lack of experience in public education.

Under Trump, LGBT Student Rights Could Be in Trouble

What DeVos lacks in expertise she’s made up in money. The daughter of auto-parts magnate Edgar Prince, DeVos married Amway heir Dick DeVos, and together the DeVoses have given some $200 million to conservative organizations and politicians—including nearly $1 million to 21 of the senators who will vote on her nomination—with particular devotion to the cause of privatizing public education. DeVos is not coy about the power of her pockets: She wrote in 1997 that she had decided “to stop taking offense at the suggestion that we are buying influence. Now I simply concede the point…. We do expect some things in return.”

DeVos has been deeply involved in education—as a lobbyist and philanthropist—since the early 1990s, particularly in her home state, Michigan, where she’s pushed to expand charter schools and to implement a voucher system that would funnel public dollars to private schools. DeVos adheres to the idea that free-market competition between schools will produce the best outcome for students. “The more of a ‘marketplace’ we have for education, the more, I think, the better,” she said in a 2015 interview. In another speech that year, she referred to public education as a “dead end,” and said that “government really sucks.”

But DeVos is not simply a free-market ideologue: She has also argued for education reform as a way to advance a Christian worldview. Like her father, DeVos has backed a number of right-wing religious organizations. During a convening of wealthy Christians in 2001, DeVos likened debate about public education to a religious battlefield, and described her work to promote school choice as a crusade to “advance God’s Kingdom” and to secure “greater Kingdom gain.” In the year prior to those remarks, the DeVoses spent more than $2 million backing a school-voucher referendum that would have permitted Michigan parents to pay tuition at religious schools with public money. The measure failed decisively—but soon DeVos may have a national platform from which to attack the separation of church and state. (Donald Trump campaigned on a proposal to spend $20 million on a federal voucher program, though there are several obstacles to that plan.)

Publicly, DeVos talks less about serving God than about improving quality and equity in education. But there’s little evidence that the reforms she’s fought for have improved Michigan’s schools. In 1993, DeVos helped to advance a bill that opened up Michigan to the charter-school industry. Since then she’s advocated—successfully—to eliminate a cap on the number of charters operating in the state, and to block measures to improve oversight. As a result Michigan now funnels $1 billion in taxpayer dollars to the privately operated schools, which mostly have failed to outperform traditional public schools. In spite of the rapid expansion of charter networks, many children in the poorest neighborhoods of Detroit still live in an education desert.

Eighty percent of the state’s charters are operated for profit, and, according to a 2014 investigation by the Detroit Free Press, have committed a “range of abuses” including misuse of public money. Thanks to Michigan’s lax oversight laws, almost anyone can open a charter school—even operators with track records of failure—and schools that waste state money or demonstrate poor academic performance are hard to shut down. Former Michigan schools superintendent Tom Watkins, a charter advocate himself, told the Free Press, “in a number of cases, people are making a boatload of money, and the kids aren’t getting educated.”

DeVos’s record is so extreme that her nomination has made some allies of the charter movement queasy, along with teachers’ unions and other public-school advocates. The Massachusetts Charter Public School Association wrote to Senator Warren this week to express the association’s “concern” with DeVos, on account of her recent efforts to kill legislation to provide more oversight over Michigan’s charters. More than 200 national groups comprising the -he Leadership Conference on Civil and Human Rights sent a separate letter opposing her confirmation because of her efforts to “undermine bedrock American principles of equal opportunity, nondiscrimination and public education itself.” Others, including Senator Warren, are just as concerned about DeVos’s lack of a record on critical issues overseen by the Department of Education—about where she stands on re-privatizing the federal student-loan program, for instance; access to pre-kindergarten; or punitive discipline.

Republicans have rushed DeVos’s nomination along, and may make a complete evaluation impossible. The hearing was postponed after Democrats complained that an ethics review of DeVos’s conflicts of interest had not been completed (at the time of this writing, it still hasn’t been), and Senator Patty Murray, the ranking Democrat on the HELP committee, said Thursday that she still has “some concerns about missing information” on DeVos’s financial disclosure forms. Meanwhile, according to The New York Times, committee chairman Lamar Alexander has decided to limit fellow committee members’ questions to five minutes. In the end it’s likely that DeVos will be confirmed. For public-school advocates, the only small, good thing to come of her nomination may be a more critical conversation about what has until now been a bipartisan project to privatize public education.