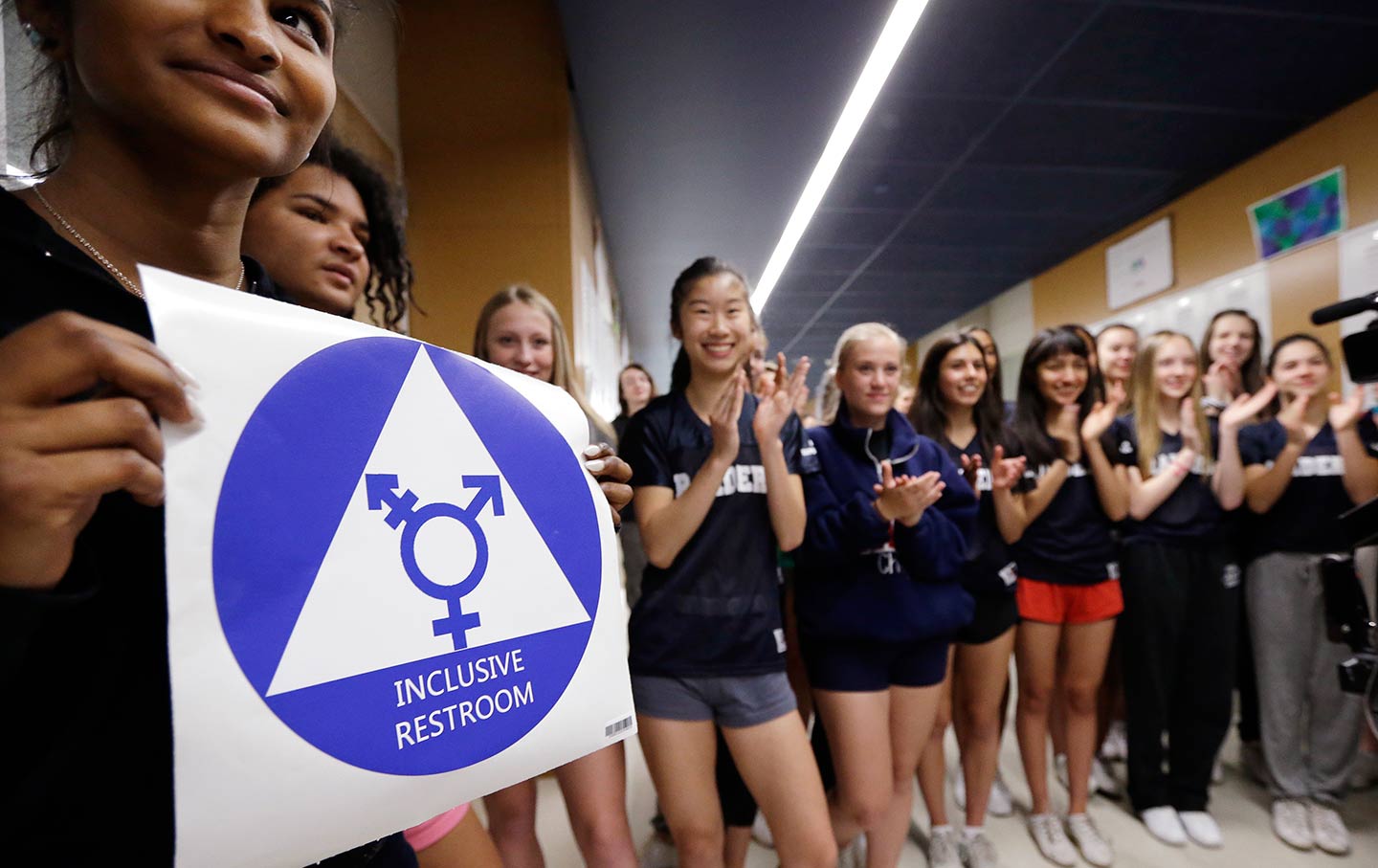 For many LGBT youth, bullying is more than the occasional mean taunt in the hallway. The bully can be the principal who refuses to call a trans teen by the right pronoun. Bullying can mean being barred from the bathroom. And now queer kids have an even bigger bully to fear: the one about move into the White House.

Under the Obama administration, there has been steady improvements in LGBT protections in schools, including policy directives supporting bathroom-access accommodations for transgender students and anti-bullying programs focused on LGBT youth.

But all of that progress is now in jeopardy as Donald Trump prepares to take office next week. In a sign of his approach to education, Trump has named education-privatization advocate Betsy DeVos to head the Department of Education. DeVos has alarmed activists with her track record of promoting charter schools and Christian conservative causes.

But whatever federal education authorities do to strengthen LGBT protections (as the Obama administration has done) or to undermine them—as many fear DeVos will attempt—rights advocates say that the future of LGBT youth rights will depend on how local communities proactively work to foster a more inclusive school culture.

According to Human Rights Watch’s report on LGBT youth struggles in five states (Alabama, Pennsylvania, Texas, Utah, and South Dakota), while federal protections have proven an essential safeguard for youth facing abuse and systematic discrimination, many remain vulnerable to violence.

Everyday violence and oppression reinforce each other in schools. Abuse takes many forms: blocking a trans student from using the gender-appropriate locker room, being called a slur by a bigoted teacher every day in class. In some heavily religious communities, kids are subtly shamed by the imposition of daily school prayer. A parent might be forced to withdraw a child from school because of a campaign of rape threats on social media. Students of color may be even more at risk, as racist school discipline policies may intersect with anti-LGBT harassment and push a youth into the juvenile justice system.

Kevin I, a 17 year-old transgender boy in Utah, was stunned to see his school staff aligning with his tormentors. He told researchers:

I’ve been shoved into lockers, and sometimes people will just push up on me to check if I have boobs…. [I have reported] I’ve been physically hurt because I’m trans, and I remember one of the administrators said, “It’s just because you’re so open about it.” I’ve reported slurs and they say they’re going to go talk to them, but they never do.

Still, progressive student groups, teachers, and administrators have often taken the initiative in defending LGBT students’ civil rights. Teachers could take the lead in helping charter pro-LGBT student groups, promote comprehensive sexuality-education programs, or post “safe space” signs in school to encourage a culture of inclusiveness and to promote community dialogue. These incremental steps help foster consciousness around LGBT issues, which can reverberate throughout the community.

According to HRW fellow and author of the report Ryan Thoreson, under Trump, local initiatives will be the key determinant of whether schools become more or less inclusive of LGBT youth under the next administration.

Currently 31 states “lack any specific, enumerated laws protecting against bullying on the basis of sexual orientation or gender identity,” effectively leaving it either to federal authorities or to individual schools to establish protections for LGBT youth. South Dakota actually bars school districts from creating their own targeted civil-rights policies. Nonetheless, HRW says the main threat isn’t explicitly anti-LGBT laws, but the failure of school districts to implement LGBT-friendly policies and programs at the grassroots.

Thoreson, author of the HRW report, notes that cultural change is in many ways exceeding legal reform:

Even in very red states, we’ve seen schools that have adopted trans-inclusive policies and have done so with a great deal of success, both for the individual students who see their experience in schools improve and also for the broader school community.

But the lack of concrete anti-discrimination policies can feed into local hostility to LGBT rights. “Ellen,” a gay teacher at a Utah school, testified about her struggle with a blatantly homophobic school atmosphere, in which anti-LGBT shaming was seen as routine. When the principal dismissed the abuse experienced by a boy, who seemed like he might have identified as gay in a more open environment, Ellen felt, “There was nothing I could do, and it killed me. It not only broke my heart for him, because I saw the bullying and teasing—but I was also terrified for me. I didn’t want to risk exposing myself.”

Moreover, if DeVos moves to defund public schools and shift more students into semi-privatized charters or private voucher-funded religious schools, public schools may become increasingly deregulated, and students may see even the limited progress under Obama unravel, according to Thoreson:

One of the big concerns is making sure that private schools and charter schools have the same protections in place for LGBT kids that public schools do…. How do we make sure that teachers feel protected, that there’s adequate training for school counselors, that bullying policies are fully inclusive of LGBT kids, and is there a way to guarantee that kids aren’t being thrown to the wolves.

It’s unclear how DeVos’s religiosity will color her policymaking, but she is taking office with an explicit agenda of making schools less publicly accountable. When schools become detached from constitutional protections and the community interest, other more regressive social forces may take hold. The whole school community could suffer, becoming less democratic as both a space for learning and a public workplace.

As Ellen explained, “When I was terrified of being discovered, I wasn’t nearly as effective as a teacher as I could have been…. And I think what applies to me applies to kids.”