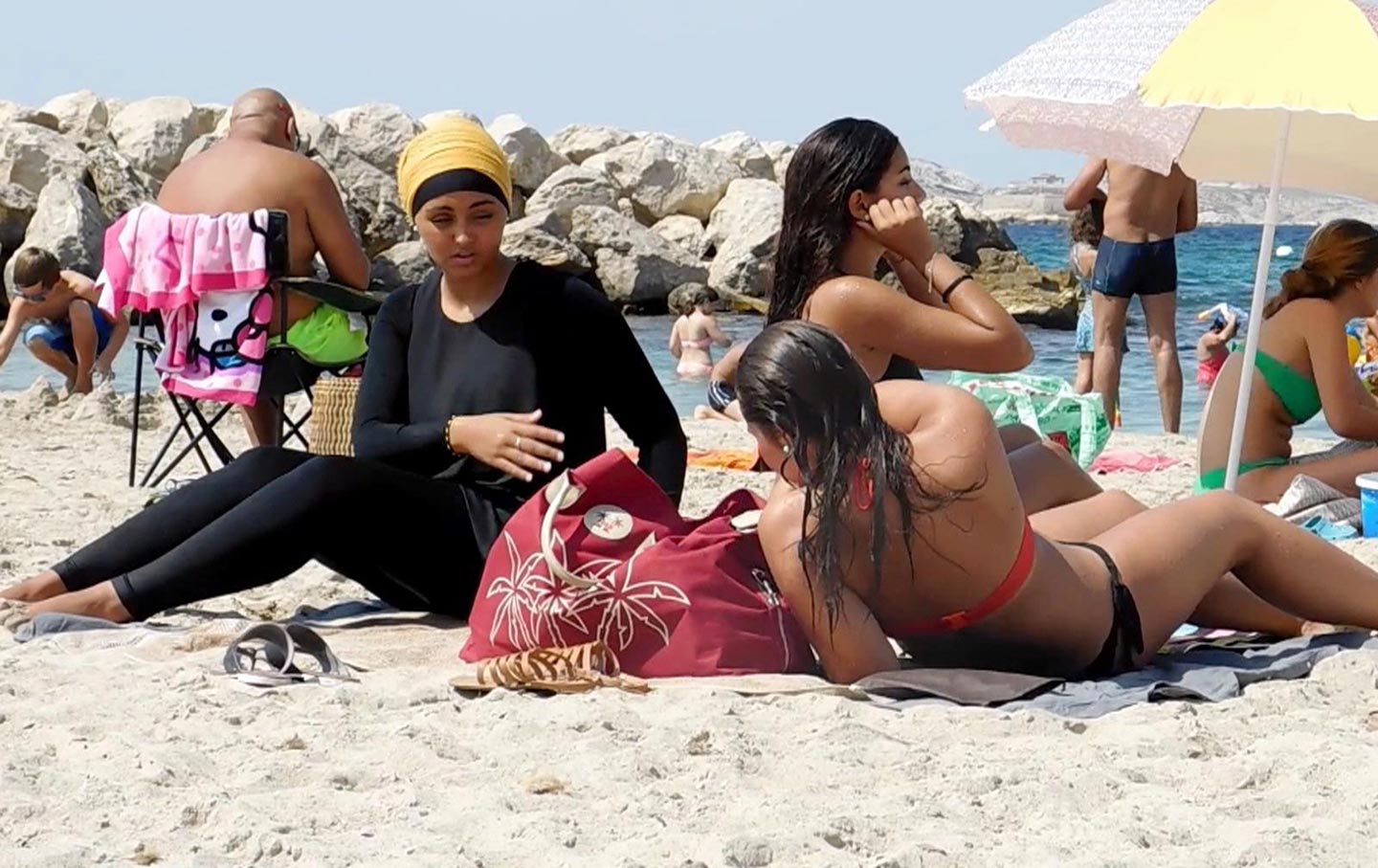 In this image taken from video, Nesrine Kenza, who says she is happy to be free to wear a burkini, and two unidentified friends rest on the beach in Marseille, France. (AP Photo)

The latest French fashion obsession isn’t on display on Paris runways but on the beach towels of Muslim women on the Riviera. The real craze, however, has nothing to do with apparel choices, and arguably little to do with the women themselves.

Following July’s deadly attack in Nice, a wave of xenophobia has inspired 30 coastal districts to ban the burkini, a full-body swimsuit resembling a wetsuit-niqab-ninja hybrid, intended to help women enjoy sun and surf while abiding by “modest” dress codes. Suddenly what started as a pragmatic sportswear option has been painted as a Muslim extremist “provocation.”

Last Friday, an administrative court effectively suspended the Burkini ban as an infringement on personal rights. However, opportunistic local politicians continue to grandstand in defiance, capitalizing on a xenophobic far-right populist surge. Former president Nicolas Sarkozy claimed he would try to impose a constitutional nationwide ban on burkinis, suggesting that the essence of French secular law was threatened by a few women sunning in pastel unitards.

The rash of burkini backlash is fueled by the ingrained French principle of laïcité, a distinct concept of militant civic secularism. This runs counter to the principle underlying “immigrant integration” policies: multiculturalism, inclusive of Islam. The murder of staff at the satirical journal Charlie Hebdo and other assaults at iconic cultural spaces like a Paris rock concert have stoked a panicked sense that French national identity is under attack. But the byproduct of the ethnic and religious fissures are not, as the far-right suggests, Muslim“extremism,” which is present in a negligible sliver of French society. Rather, the alienation of France’s Muslim minority is expressed in social despair, class and housing segregation, and, occasionally, the explosive language of a riot.

France has previously imposed similar restrictions, including a 2010 “burqa ban” on the full-face veil in public—but these have mainly been justified (controversially) on grounds of public security or civic cohesion. The burkini ban seems to reach further by treating a woman’s private choice of dress as a political offense.

According to Davidson College sociologist Natalie Deckard, compared to other liberal democracies, France’s political identity is framed around uniformity and exclusivity against Otherness:

The French conceive of minority status as a passing phase before assimilation into the French dominant culture.… The French are taking out their aggression against Islam on the usual victims of aggression of any type: the most vulnerable. By asserting control over women’s bodies, they are responding to the threat of terrorism by trying to break the will of the fractious Muslim minority.

French officialdom’s ham-fisted attempts to shield Muslim women from oppression actually seems to wear down their autonomy. One woman explained to The Guardian how the ban had made her feel chillingly self-conscious in public, even after the court’s intervention:

The ban and the row over burkinis make me feel very sad and it seems unfair…. We pay taxes like everyone else and I just want to do some exercise for my health on a public beach.

The simple recreational desire she expressed contrasts jarringly with the fashion-police agenda. The heart of Muslim discontent lies far from the coast, however: It’s rooted in the embattled Parisian cités—the suburban immigrant enclaves full of bitter youth, known for outbreaks of rioting in recent years—that France’s political establishment makes invisible while obsessing over bikini lines.

The ban’s material effects, meanwhile, remain ambiguous: Just 30 Burkini fines (38 euros each) have been issued, all in Cannes and Nice. This has been offset partially by one French businessman’s campaign to personally pay women’s fines in a kind of burkini jubilee. There has also been a paradoxical tripling of burkini sales, according to BBC, now that they have come to represent fashion contraband.

Burkinigate isn’t about the visual symbolism of Muslim “modesty,” but official humiliation of the Muslim community: sending a message that they are not welcome and “their women” will be ruthlessly marginalized. Even if French Muslimahs all wore pink thongs to the beach tomorrow, the idea would still be not so much to force women to change but to invent a pretext for excluding them, and simultaneously affirm the supposedly shared identity of “mainstream” liberal Frenchness.

The state-imposed “liberation” leaves Muslim women silenced, deprived of agency as their bodies are reduced to a proxy ideological battleground. Agnes De Feo, a sociologist who studies the politics of French Muslim women’s dress, says via e-mail from Paris that policies like the “burqa ban,” in their zealous imposition of supposedly “universal” Western norms, overlook the complexities of hybrid identities within marginalized minority communities:

Muslim women wearing headscarves are mostly born in France, they were educated in the schools of the republic and are well aware of themselves with a free will…. most curious is that these women say they are feminists and agree with the feminist struggle of saying: my body belongs to me.

Yet burkini bodies may actually signify a kind of rebellion. The design was created by an Australian designer to help give women greater access to swimming recreation. After years of criticism from religious conservatives that the design was unacceptably modern, now the same swimwear innovation is branded as jihadi chic by “Western” secular reactionaries.

Orthodox underpinnings aside, perhaps Burkinitas “wear” an individual aesthetic vernacular that others simply misread as a medieval relic, because it fails to conform. In De Feo’s view, the fetishistic policing of women’s appearance by legislating French “values” is a step in “the symbolic lynching of an entire category of the French population.”

The resulting civic polarization, moreover, might ultimately have truly regressive impacts on how Muslim women develop their own cross-cultural ideas of women’s rights:

Muslims are insulted, discriminated, beaten, especially Muslim women, they are a second-class people. So there is what we call in sociology the reversal of the stigma, they become more religious, wear islamic clothes, men grow beards, etc. And the cycle is without end.

The answer to the perceived patriarchy of one culture is not the liberal paternalism of another. The Muslim fashion wars draw a veil over the writhing anxiety of a whole generation of disaffected youth.