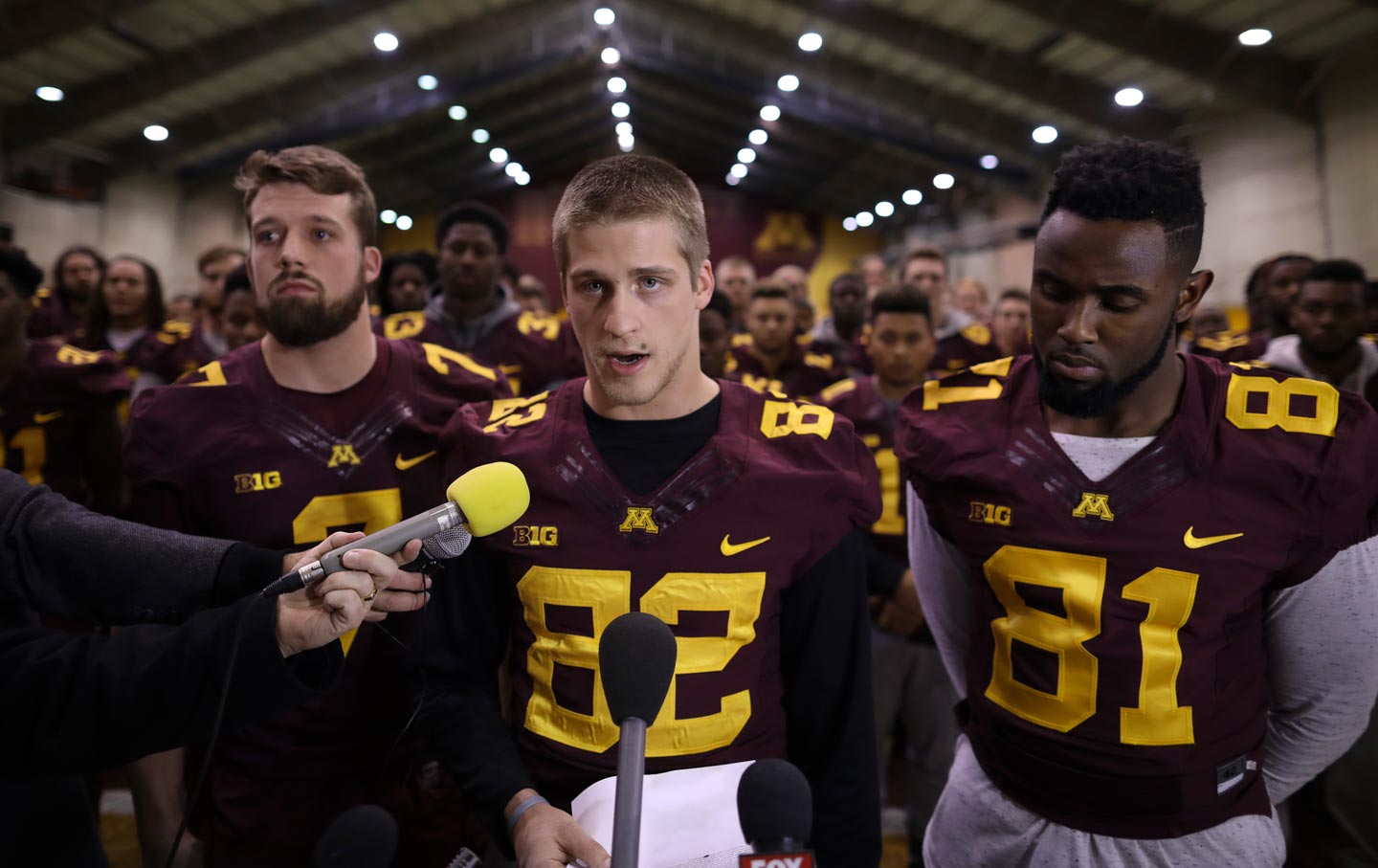 “So we watch [Negro and white boys on TV screens] in brutal solidarity burning the huts of a poor village, but we realize that they would never live on the same block in Detroit.” —Dr. Martin Luther King Jr., 1967

After 48 hours of tough talk, the Minnesota Golden Gophers football team decided on Saturday to end its strike/boycott and play in the Holiday Bowl on December 27 against the Washington State Cougars. Strikes on the part of NCAA athletes are incredibly rare. Usually they are rooted in some principle of social justice. This is not one of those times.

The players were demanding the reinstatement of 10 teammates who had been accused of taking part in a gang rape. They folded after two days.

It was a meek surrender for a team that had taken an emphatic stand on a battlefield it had no business fighting upon.

Football isn’t war, and damn the coaches and couch generals who say otherwise. But I couldn’t help think about Dr. King’s words about “brutal solidarity” when seeing the initial press conference of the white and black teammates. The Golden Gopher players thought the school suspensions were unjust because the police reviewed the evidence and declined to make any arrests. The alleged rape had been filmed by one of the players on his phone, and authorities said that the video showed, in the words of an investigator, that the woman who came forward in the immediate aftermath “does not appear to be upset by the sexual activity and does not indicate that she wants it to stop.”

Yet the survivor of this incident says she was inebriated to the point of blacking out, and sexual contact with only two of the players was consensual. The police may not have pressed charges, but the players were found to have violated of the campus’s code of conduct. Sentencing—suspension or expulsion—was not due to happen until after the Holiday Bowl. The school decided independently to make the players sit for the December 27 bowl game, which sparked the team’s boycott.

Tracy Claeys tweeted, “Have never been more proud of our kids. I respect their rights & support their effort to make a better world!”

I contacted Abeer Syedah, student-body president at the University of Minnesota. She said. “I certainly resonate with the experience of poor communication and transparency when it comes to working with campus officials. So I understand if that is contributing to the players’ frustrations. It is, however, really important to recognize that there is a lot of information about students that legally cannot be shared. And that information is also where much of this speculation lies. With that in mind, even ignoring all the facts and nuance, it needs to be recognized that there is deep symbolism in this act of solidarity the football players are showing with their suspended teammates that, to the many survivors of sexual assault across college campuses, is a harrowing reminder of the power associated with protecting rape culture. To survivors, this feels familiar. To those who thought about speaking up, this silences. We must believe, love, support, center, and be in solidarity with survivors. Especially when the power stratification is against them. Fact of the matter is that a Big 10 University like ours wouldn’t suspend 10 football players during the season without a strong reason. In fact, historically, they would have all the incentive to try not to.”

None of this deterred the team from turning this into a warped—at best confused, at worst pernicious—version of social protest. Team spokesperson, wide receiver Drew Wolitarsky said at their initial press conference:

The boycott will remain effective until due process is followed and suspensions for all 10 players involved are lifted. We got no answers to our questions about why these kids are suspended, when they were just found not guilty by the law.… We are concerned that our brothers have been named publicly with reckless disregard in violation of their constitutional rights. We are now compelled to speak for our team and take back our program.”

His full statement is a mess, not recognizing—or understanding—the difference between the university’s Office of Equal Opportunity and Affirmative Action finding and a separate decision by the school to suspend them. The team is upset about the latter, but was demanding to invalidate the former. This, knowingly or not, turned their strike into a direct action aimed against a university’s right to have a code of conduct around sexual assault. In addition, Wolitarsky’s statement that the players “were just found not guilty by the law,” is simply not true. As Jessica Luther, the author of the book Unsportsmanlike Conduct: College Football and the Politics of Rape, said to me:

“The police and district attorney decided not to charge them or prosecute the case, which means that guilt or non-guilt will never be determined under the law. Beyond that, the [university’s Office of Equal Opportunity and Affirmative Action] has a much lower standard of proof to determine the violation of the student-conduct code (‘preponderance of evidence’) than does a prosecutor or jury in a criminal court (‘beyond a reasonable doubt’). I am unsure if the players have a handle on that context and yet chose to make this bold public statement in which they claimed the process was unfair to them.… I find this distressing, since they chose to use their collective power to advocate for change.”

Then there is the support of the coach. Tracy Claeys has been on the coaching staff since since 2011. As Luther pointed out, “That means Claeys was around during the 2014–2015 season, there were ‘complaints about football players, including two reports of sexual assault committed by individual players,’ two reports of sexual harassment involving ‘groups of football players,’ and a report of retaliation of involving ‘a group of football players.’ He was also there when, in 2014, an MPR reporter attended a mandatory meeting for all UM athletes in which issues of ‘date rape, racism, substance abuse, and other issues on campus’ were discussed. I cannot but wonder, then, what Claeys means when he says that his players, who appear to be confused over what exactly they are boycotting and why, are trying to ‘make a better world.’”

I have heard from people who say that these players should be supported for their act of multiracial solidarity. One person emailed me: “Here are college athletes—who are treated like indentured servants—organizing and using their collective power to right what they believe is a wrong. It’s black and white players coming together to make this point. Why are you against that?”

I spoke to Keeanga Taylor, author of From Black Lives Matter to Black Liberation, and she put it perfectly: “Solidarity to subvert a rape investigation into several of their teammates is not really solidarity but evidence of persisting sexism, sexual violence and the continuing crisis of alcohol abuse, confusion over consent, and men who think women’s bodies are their domain on campuses across the country. Yes, we need solidarity. No, we’re not looking for solidarity in defense of a possible rape.”

It is a good thing the players stepped back from this boycott, removing its poison from a sports-yapping news cycle, defined by false equivalency and “embracing debate.” What they were doing was a perversion of every action by college athletes who have stood up to the rank exploitation of the NCAA. It was a slap in the face to the football team at the University of Missouri, who went on strike last year in support of the Black Lives Matter movement on campus. To even call this “solidarity” is also an insult to everyone in the University of Minnesota community who has engaged in a series of high-profile anti-racist struggles throughout the last several years, while the football team was silent.

I spoke to Julie Tilsen, an adjunct faculty member at the University of Minnesota. She said, “It would be so wrong to herald this team as some kind of justice heroes for performing the tired act of ‘bros before hos.’ They never did anything public or courageous during the heat of Black Lives Matter or about sexual assault on campus or when Chicano studies were cut. They’ve only emerged when their own interests were at stake. To add insult to injury, this came out while the Gopher women were at the final four in volleyball and it’s now overshadowed. I’m pissed that their continued success is ‘trumped’ by men’s bullshitery.”

Tilsen’s use of the word “trumped” was not just a presidential pot shot. The team demanded a meeting with the Board of Regents on Friday to discuss the suspensions and their goal, they said in a statement, was to “make the program great again.” The phrase in this political climate is chilling. It speaks to the fear that having this sexual-predator president in the White House means a cultural shift toward a backlash against those trying to end campus rape. That fear is understandable. But it is manifestly clear that the “brutal solidarity” in the Minnesota locker room has been nurtured since long before this election season.