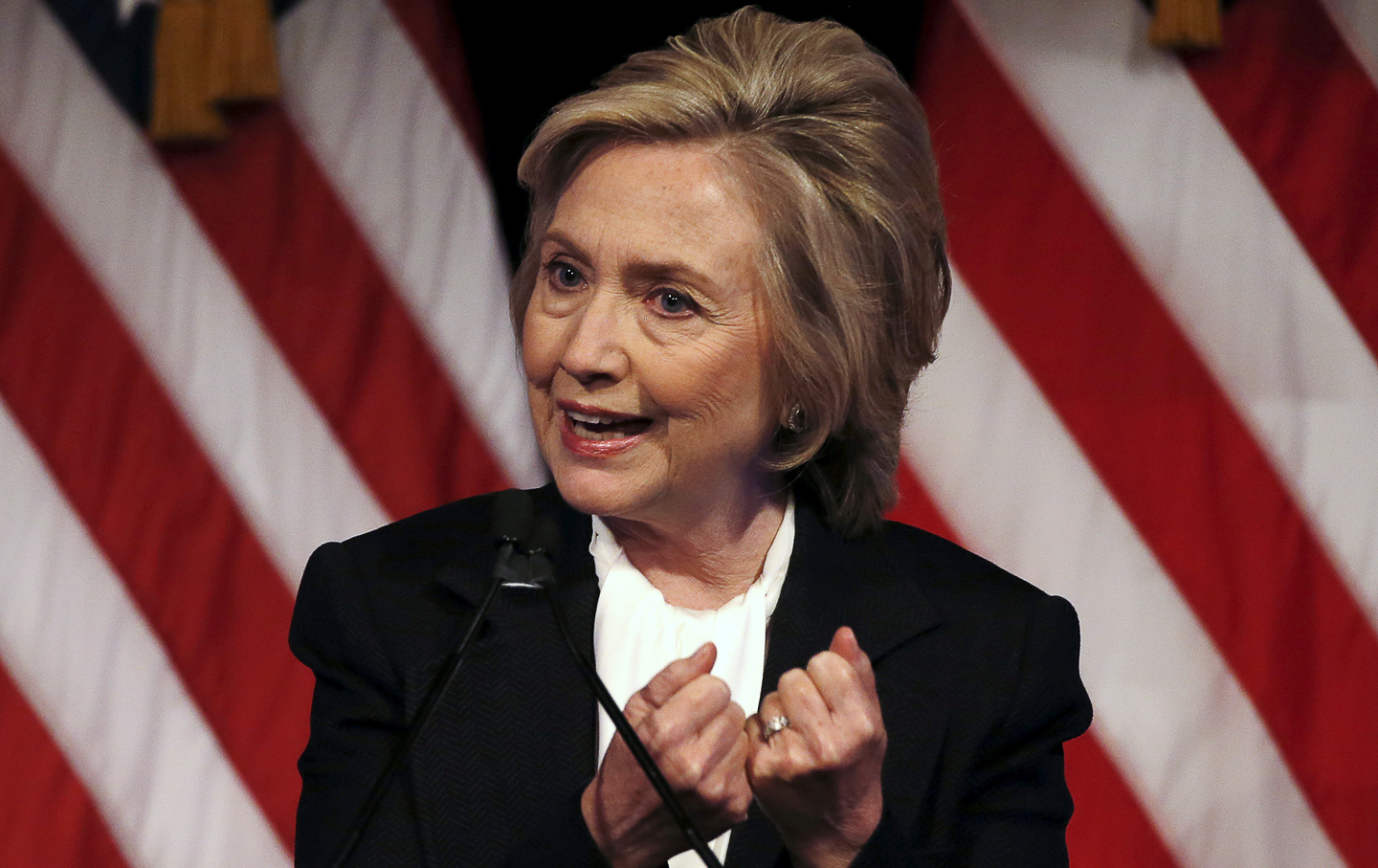 Doug Henwood has replied in Jacobin to my column in which I reviewed his new book My Turn: Hillary Clinton Targets the Presidency. As he notes, it’s a little unusual for a writer to respond to a review—my friends have talked me out of it several times. Mostly a writer’s reply provides an opportunity for the reviewer to repeat all the negative points from the original review, and then some. In any case, here goes.

Doug notes that I “begin with confessing a soft spot for Bernie Sanders,” but he thinks it’s just rhetorical. Not true. Bernie definitely seems like one of the good guys to me and, of course, I’m much closer to him than to Hillary politically. Like my Nation colleagues, I think it’s great that he’s running. It’s true that electing a pro-choice Democratic woman president is important to me—I explained why here—but that is not the only thing I care about. I supported Obama in 2008, after all. However, Doug is right to suggest that I think Hillary is the stronger candidate, by which I mean I think she is more likely to defeat any Republican nominee. Ultimately, that is why I support her, and why I would support her even if she had as little to recommend her as Doug argues in his book. If Bernie wins the primary, I will work my fingers and my bank account to the bone for him. But the stakes are too high to support in the primary a candidate who if he wins looks likely, at least as of now, to go down to honorable and virtuous defeat in November.

Doug says I make no serious effort to contradict his damning account of Hillary’s record. It is hardly news that Hillary is no populist insurgent: She is a technocrat, friendly to banks and Wall Street, has favored on “humanitarian grounds” military interventions that have not worked out well at all. Her excellent record on women’s issues is marred by her husband’s signing of the 1996 welfare-reform bill, which she endorsed. The Clinton Foundation’s record in Haiti—first reported, by the way in The Nation—is not good. And yes, both she and Bill have made a ton of money since they left the White House. But even if every word he writes is completely accurate, it’s not the whole story. If he’s going to attack her for botching healthcare reform, Doug should at least have mentioned her role in establishing the SCHIP program, which gave healthcare to millions of low-income children. If he’s going to dismiss her as a “carpetbagger” and a “mediocre” “seat warmer” in the Senate, he should have noted that her voting record made her one of the more liberal Senate Democrats—70 percent more liberal than her fellow Senate Dems in her final term. And isn’t it relevant that Republicans controlled the Senate from 2001 to 2007? What Doug gives us is so partial—he mentions every negative (even her supposed breaking of a lamp in a fight with Bill)—he turns her into a cartoon.

A word about Brad DeLong. Doug uses as the epigraph to My Turn a quotation from a 2003 blog post in which the economist Brad DeLong, who worked on Hillary’s healthcare reform, energetically declared her unfit for the White House. Doug appended a note that DeLong had failed to respond to his e-mails asking if that was still his view. In my review, I pointed out that a minute’s Googling would have revealed that DeLong retracted his view on Hillary in 2007 and endorsed her on his blog enthusiastically in 2015. Why can’t Doug just admit he messed up? Instead, he uses his Jacobin response to double down on poor DeLong, suggesting that perhaps he took down his original, negative post in order to position himself for a job in Hillary’s White House. There is simply no justification for concocting this mean-spirited fantasy.

Two things bothered me in particular about Doug’s book. First, as I suggested in my column, is his tone-deafness to gender. He attacks Hillary for qualities that pass without notice in men and that probably no person who runs for high office can do without, including Bernie Sanders: ambition, determination, egotism, pride, a capacity for strategic alliances, not always being pleasant. True, Doug did mention her swearing as a positive trait, which I overlooked, but my point was that he wouldn’t have even noticed her blue language if she were a man. Doug ignores everything good Hillary’s done or said—SCHIP, her excellent record on reproductive rights, on women’s rights, her elevation of women and girls as secretary of state, her speech at the 1995 UN conference on Women in Beijing, where she articulated before the whole world that “women’s rights are human rights”—a bold idea then, and still contested today. Perhaps he can’t see these good things she’s done, because they’re good for women. Doug also neglects the particular double binds and difficulties women face in public life, especially women of Hillary’s generation. He has no sympathy for the ways Hillary has had to bow to sexist conventions—changing her name, having to justify being a working mother, toning down her persona to fit preconceptions of how women should behave and what a marriage should be. Without her marriage—which Doug cites as a black mark against her—she surely would not be the first woman ever to make a serious run for the White House. Our politics are not kind to single women or wives with husbands who take a back seat. Because of that marriage, though, she is seen as entitled, as benefiting from a “dynasty,” as a kind of feminist Marie Antoinette.

I don’t think one can write meaningfully about Hillary and not discuss these things, especially in a book called My Turn. What she represents politically is entwined with her being a woman. That is why I mentioned that half the people In the country think she’s a radical socialist feminist: People see her through the lens of gender, and that matters. Nobody calls an ambitious man gay, but they do call Hillary a lesbian, a castrating bitch, and worse.

My second point is that Doug is fighting a straw man: “liberals’ fantasies about her as some sort of great progressive.” Most liberals are under no such illusion—I’m certainly not. She is simply the most progressive person who can actually win the 2016 election.

Editor’s Note: When published, this article erroneously stated that the UN Conference on Women in Beijing occurred in 1985. In fact, it took place in 1995. The article has been corrected.