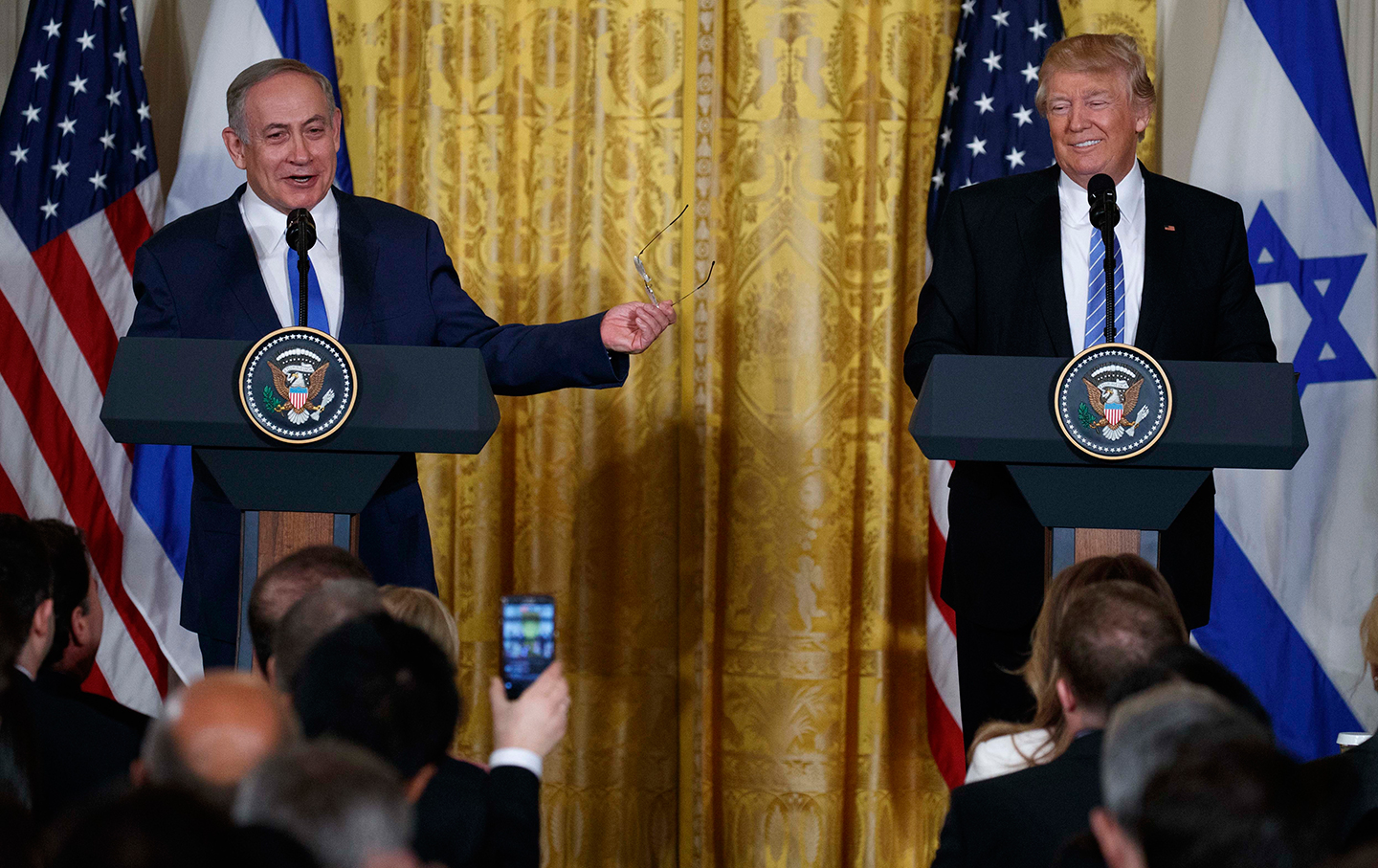 If he survives his mounting legal problems, next year Benjamin Netanyahu will become the longest-serving prime minister in Israel’s history, surpassing the state’s founding father, David Ben-Gurion. Throughout his terms in power (which include a first term, from 1996 to 1999, preceding his current tenure, which began in 2009), Netanyahu has had to deal with Democratic US presidents who were committed, at least in theory, to the two-state framework. As a result, Netanyahu has been forced again and again to pay lip service to the very idea—a Palestinian state—he had made his name opposing. Last week, in the promised land of Trump, Netanyahu finally got to hear an American president walking back on the two-state solution. The Israeli prime minister didn’t even try to hide his sense of triumph and vindication.1

But the meeting between Netanyahu and Trump did very little to shed light on the new administration’s Middle East policy or, specifically, on its approach to the Palestinian issue. Early in his presidential campaign Trump had promised to be a “sort of neutral” arbitrator between the parties, only to radically pivot to the Israeli side later on. Then came the promise to move the US embassy to Jerusalem, which was quickly put on hold after his inauguration. Now the president has appointed his son-in-law, Jared Kushner, to pursue “the ultimate deal,” while depriving him of a clear end-goal or any realistic parameters for such a deal.2

This incoherence is interpreted on the Israeli side as a major opportunity. The Trump administration’s desire to appear much closer to the Israeli government than the Obama administration was, along with the evident vacuum on the policy level, has led many Israeli politicians to believe that they now stand a chance of rearranging the entire context of the Palestinian problem—not just during the Trump presidency, but for decades to come. The only question is where to go: A regional arrangement involving Israel’s Arab neighbors? Major settlement expansion under continued occupation? Annexation of the West Bank, whether partial or total?3

The settlers aren’t satisfied with new housing projects; they want changes in the legal status of the West Bank.

Since his return to the prime minister’s office in 2009, Netanyahu has pursued a status-quo-oriented policy. Israel has been expanding settlements slowly, focusing on the 60 percent of the West Bank that is still under its direct military control, along with key neighborhoods in East Jerusalem. But Netanyahu was careful not to initiate large-scale actions that could bring about a serious backlash, from damage to economic relations with the European Union to a case at the International Criminal Court. In the Gaza Strip, Israel carried out consecutive military operations that inflicted much suffering on the civilian population, but the idea of toppling Hamas, which has been in control of the Strip since 2006, was rejected again and again, on the understanding that retaking Gaza will bring about negative consequences for Israel, both on the ground and internationally.  4

The new reality in Washington encourages more pro-active thinking, from settlement expansion to the retaking of Gaza. While in opposition, Avigdor Lieberman had made toppling Hamas one of his landmark policies; as defense minister, Lieberman is now taking a more careful line, but he could be tempted to try to fulfill his promise in the event of another escalation, planned or unexpected. In the West Bank, the settler leadership isn’t satisfied merely with new housing projects; it would like to see changes in the legal status of strategic parts of the West Bank. In the north, Israel would like to have its share in a Syria bargain—primarily, international legitimization of its occupation of the Golan Heights—if and when such a deal emerges.5

Encouraged by Trump’s election win, the Knesset approved a bill allowing the government to confiscate private Palestinian land on which Jewish outposts have been built, and an initiative to annex the West Bank city of Ma’ale Adumim is already under way (in the past, the United States opposed this move, as it could eliminate any future Palestinian contiguity in the West Bank). More mainstream voices are calling on the government to reach an agreement with Washington allowing unlimited construction in Jerusalem and within the major settlement blocs, thus bypassing the thorny legal issues that would be raised in the case of annexation.6

There are two corruption investigations against Netanyahu, another against his wife, and a fourth against his attorney.

Another idea, pushed publicly by Zvi Hauser, a former government secretary under Netanyahu, is to seek American recognition of Israel’s annexation of the Golan Heights as “compensation” for the nuclear deal with Iran, which Trump opposes. Netanyahu told reporters he brought this up in his Washington meetings last week.7

The prime minister himself seems to be more careful than his coalition partners. From his perspective, the frenzy on the right—and especially among the settlers, who describe Trump’s presidency in historic, almost biblical, terms—is not just about the new administration in Washington, but has a lot to do with his own political weakness. The police are conducting two corruption investigations against Netanyahu and another against his wife. A fourth case involves Netanyahu’s attorney and a close proxy, David Shimron. The attorney general is expected to rule within months on whether to file charges against Bibi. To complicate matters even further, Netanyahu has already hinted that unlike former Prime Minister Ehud Olmert, he won’t resign his post even if he’s indicted—a move that could throw Israel into legal and political limbo. Making far-reaching policy proposals is his coalition partners’ way of breaking from Bibi and preparing for elections, without the risk of directly criticizing the popular prime minister.8

Other Israeli politicians see the idea of an agreement with the Palestinians as a political liability, not an asset.

Whether it’s Netanyahu’s status quo or his rivals’ bolder ideas, the Israeli alternative to the two-state solution will not be one state, but rather a bypassing of the Palestinian question altogether. Reuven Rivlin, who holds the symbolic post of president, recently renewed his commitment to the idea of a single democratic state, but he remains a lone voice on the Israeli right and among elected officials in general. For other politicians—including former finance minister Yair Lapid, who is ahead of Netanyahu in some polls—the idea of an agreement with the Palestinians is seen as a political liability, not an asset. If Trump seriously pursues what he has called “the ultimate deal,” he will discover that his political problems lie on the Israeli side, not the Palestinian.9

It would be a mistake though, to examine relations between Israel and the United States under Trump only through the perspective of relations with Palestinians. The mutual political and even cultural interests between Netanyahu and Trump were already on display last week: Their summit helped Bibi move the Israeli news cycle away from his corruption cases, and he paid the US president back with hard political currency, absolving Trump (as much as he could) of anti-Semitism charges.10

These bonds are likely to tighten. Trump and Bibi share a disdain for “the old elites,” the media and the legal systems of their countries. It’s a pretty safe bet that Bibi is enjoying the crisis in the European Union, which Trump is openly aggravating. In short, the two leaders might or might not have disagreements on the issue of settlements, but they are natural allies in the biggest political drama of our time—the battle between liberalism and the populist right, which is being waged across the Western world. It is a story in which the Palestinians play an entirely different role than they have in the peace process, since if populism gains the upper hand, Israeli expertise in control and supervision of millions of people without rights might come in handy for Trump, and for many others like him.11