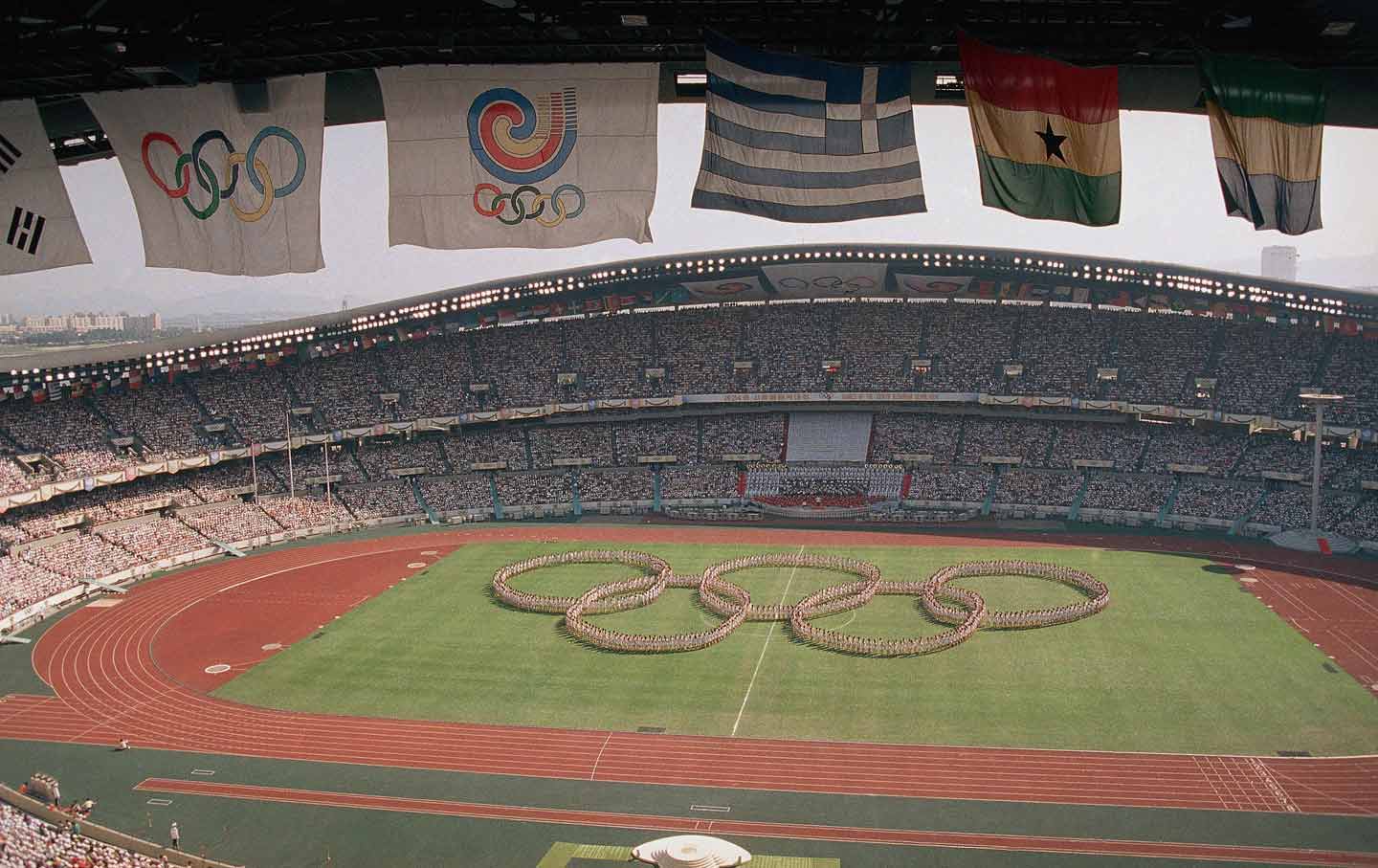 Flags frame the Olympic Stadium as participants form the Olympic rings on the field during opening ceremonies in Seoul on September 17, 1988. (AP Photo / Lineno Cironneau)

Thanks to an exhaustive as well as emotionally exhausting article published by the Associated Press, we now know that the 1988 Seoul Summer Games in South Korea were a horror show of torture, rape, slavery, and death. There has long been a fiction that these Olympics helped “democratize” the nation. Whatever good the 1988 games may have done, they were also a human-rights catastrophe beyond what even the most resolute Olympic critics could have imagined.

According to the AP, “the homeless, the drunk, but mostly children and the disabled”  were “rounded up off the streets ahead of the 1988 Seoul Olympics, which the ruling dictators saw as international validation of South Korea’s arrival as a modern country.”

Now the survivors of South Korea’s Olympic prison camps want recognition for all they suffered. In the words of a middle-aged man named Choi, who was just a boy when he was raped by the military’s prison guards, “The government has consistently tried to bury what happened. How do you fight that? If we spoke up, who would have heard us? I am wailing, desperate to tell our story. Please listen to us.” People should read the entire story. It stands as a stunning indictment not only of South Korea’s leaders but also as a testament to the price nations pay for hosting the Olympic Games.

I spoke to Jules Boykoff, author of the new book Power Games: A Political History of the Olympics about these revelations (full disclosure: I wrote the foreword to Power Games, but received no compensation for doing so). He responded: “This is the grisly underbelly of the Games. The Olympics are supposed to be about human rights and compassion, but all too often they are used as an alibi for brutal repression. The truth is that everyday people in South Korea paid an unspeakable toll so that South Korean leaders could convert the Olympic spectacle into convenient political myth. Unfortunately, this repellent incident gels with the general equation of the Olympic Games in the modern era: Olympic myth plus political opportunism equals the mistreatment of marginalized populations. In this case mistreatment is a mere euphemism for what was actually ferocious immiseration.”

The AP’s story by Kim Tong-Hyung and Foster Klug is difficult to read, the horrors and personal stories they have accumulated pile on top of one another like the bodies of those who died from exhaustion in the government’s Olympic slave-labor camps. It will make the reader want to sit and catch their breath, but, honestly, there isn’t time. Right now the countdown to the Rio Games is underway, and the story of South Korea should be taken as a call for vigilance.

I spoke with Rio’s own Juliana Barbassa, author of the book Dancing with the Devil: Rio de Janeiro on the Brink. She said that the city she loves saw an increase in human-rights abuses during the months leading up to the World Cup, and it is happening again now as the countdown to the Olympics begins: “There have been widespread favela demolitions, efforts to remove the homeless from high-rent, touristy neighborhoods like Ipanema and Copacabana, and an increase in police and army violence in low-income communities, where shoot-outs are once again the norm. Rio now is facing a budgetary crisis, and it has just over three months to be ready for the Olympics. This sort of pressure could worsen the abuses we have already seen. Human-rights observers could play an important role not just during the Games but also now, in the months leading up to the competition, by keeping track and calling attention to what is happening.”

This is absolutely right. As Brazil’s leaders battle, and Olympic construction proceeds at a breakneck pace, expect the poor of Rio to pay a terrible price. The need for independent Brazilian journalists to continue their work—see RioOnWatch for one example of this—and for people outside of Brazil to spread the word, has never been more urgent. The kinds of crimes we now know took place in Seoul flourish when practiced in the shadows.

I also spoke to Chris Gaffney, who organized extensively in Rio against the 2014 World Cup and 2016 Olympic planning. He underlined that the problem is not just about Brazil’s government but the Olympics Games themselves. “There is a case to be made for international human rights observers to be part of the Olympic planning process from day one,” he said. “While the IOC has some nice language in its documentation, there are no legally binding signatures on anything but the host city contract, which does not mention human rights at all. [IOC president] Thomas Bach has gone to the UN to declare how the Olympics are bringing peace to the world, but in reality, for Rio’s poor, they will be facing the barrels of 85,000 guns during the Olympic Games themselves and there is evidence to suggest a socioeconomic cleansing of streets. The Olympic Games themselves are generators of human-rights violations [which serve to] criminalize poverty and dispossess residents of their own city.”

This is the problem with the Olympics: They have never been just about sports. Instead, at least since Hitler’s Berlin Olympic games in 1936, they have been exploited by elites and political leaders as a way to push through construction projects that would otherwise never see the light of day and to step up military crackdowns that people would in any other instance oppose. As for Brazil, having hosted both the World Cup and Olympics, and now suffering a brutal recession, its very democracy is paying the price. Economic fears—which the “one, two punch” of hosting the Olympics and World Cup exacerbated—have opened the door for the right wing to push through the almost certain impeachment of President Dilma Rousseff on charges of corruption so minuscule by Brazilian—or the United States’—standards, that you don’t know whether to laugh or cry. Now the 2016 Olympics look poised to be an elaborate political backdrop to coronate whatever oligarchical, right-wing leadership assumes power.