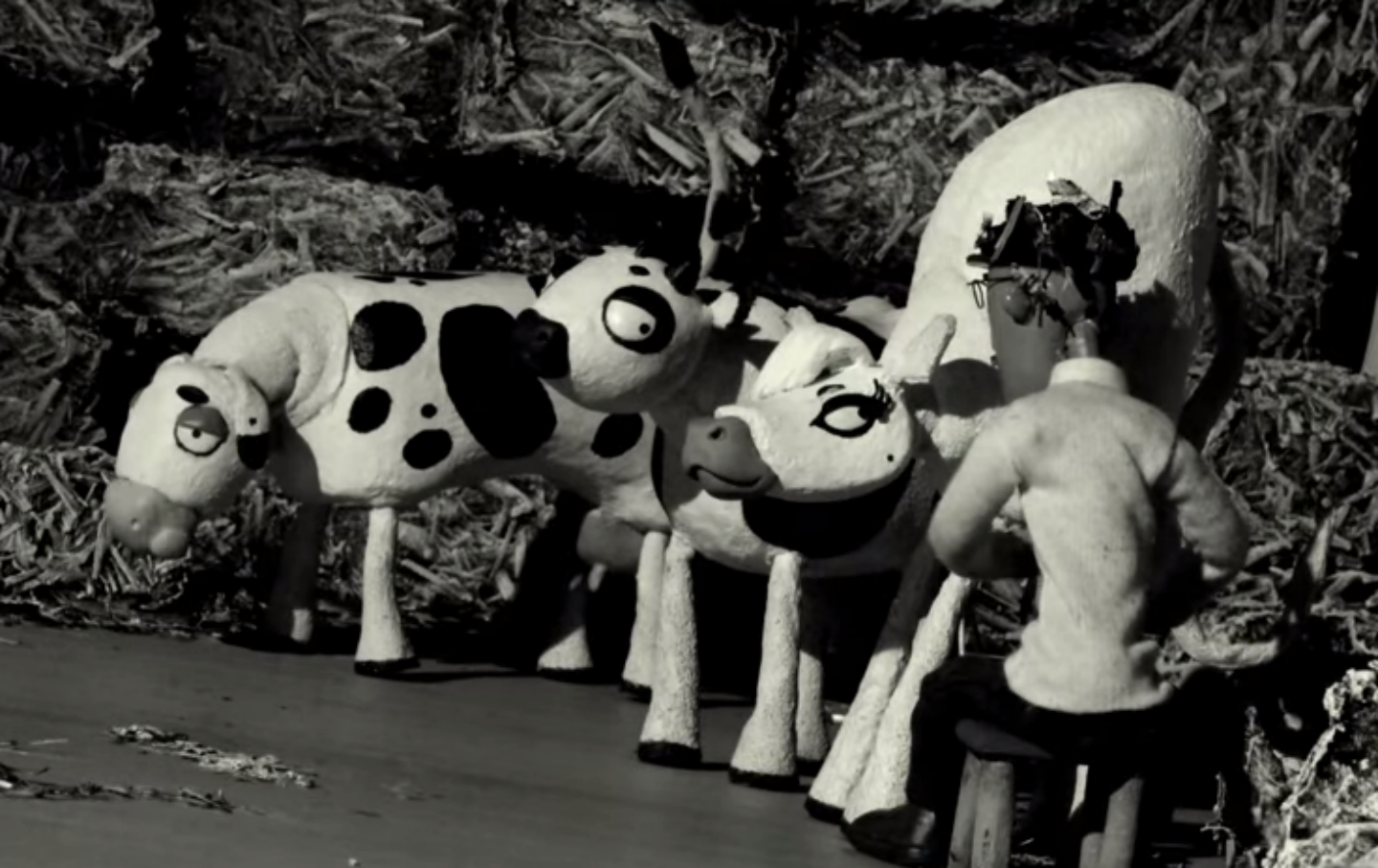 The Wanted 18 is a deadly serious documentary, a film about rebellion, resistance to occupation and the tragic toll that can come with it. But it’s also a very funny story about cows. The film, which is screening at the Human Rights Watch Film Festival this Saturday, oscillates between these modes seamlessly, with a few overlaps. How else can one explain the Israeli military’s orders to shut down a small Palestinian dairy farm except as both an example of the total control sought by the occupying power and also an exemplar of absurdist humor?

Through archival footage, claymation, illustrations, interviews, and some contrived reenactments, filmmakers Amer Shomali and Paul Cowan tell the tale of Beit Sahour, a small Christian town on the outskirts of Bethlehem in the occupied West Bank, during the First Intifada, or uprising. In late 1987, Palestinians began to organize a mass uprising in response to 20 years of Israeli occupation, which began with 1967’s Six-Day War. Local committees organized the demonstrations, strikes, mass refusals to pay taxes to the occupying authorities, and boycotts of Israeli products.

Beit Sahour was a hotbed of creative nonviolent activism. In 1988, activists decided to stop buying Israeli milk. But a substitute would be needed to feed the town’s families, so Jalal Qumsieh went to a friendly kibbutz, or Jewish collective community, and purchased 18 cows. But, as one Beit Sahour resident says in the film, Palestinians didn’t have a culture of cow farming, so a local university student was dispatched to the United States to learn everything from how to care for the cows to how to milk them. “The moment I saw the cows at the farm,” says Qumsieh in the film, “I felt as if we had started to realize our dream of freedom and independence.”

The sense of community that the cows helped to build comes across through present-day interviews with the neighborhood committee members. Everyone pitched in for the Intifada. One Beit Sahour resident tells of how a group of women would divide duties in order to sew Palestinian flags, which were banned at the time—including one woman to serve as a lookout for Israeli soldiers as the sewing happened. Majed Nasser, a doctor, recounts being stopped by soldiers as he swept the street; they did not believe a medical doctor would stoop to such a task. The soldiers then recognized, he said, “There was more to the Intifada than throwing stones and burning tires.” And, indeed, there were the cows.

The Israeli army didn’t like it one bit. Occupation was, so far as they were concerned, predicated on control—and dependence played a big part in that. Like much of the West Bank, many Palestinians in Beit Sahour depended on the Israeli economy for their livelihoods and for the products that sustained their lives; with the Israelis asserting firm control over open lands, especially so close to the so-called Green Line that sectioned off the occupied territories under military rule, agriculture proved enormously difficult. The neighborhood committees of the Intifada were themselves seen as a threat. The Israeli military governor, Shaltiel Lavie, explains in The Wanted 18:

We had a strict directive on dealing with those who formed the neighborhood committees with all the necessary force, and all legal means at our disposal in order to control them so as to prevent the possibility of their setting up an administrative apparatus which was ultimately designed to replace our own.

The Israeli military began keeping an eye on the small dairy farm and eventually intervened, ordering the farm shut down within 24 hours and, failing that, threatening to destroy it with bulldozers. Qumsieh asked the Israeli soldier why the farm had to be shut down and recalls the response word-for-word: “These cows are dangerous for the security of the State of Israel.”

Thus began a game of cat and mouse: The cows were moved to a secret location and the milk delivered by subterfuge to local residents on schedule, with the Israeli military searching the town for the bovine contraband. The search involved hundreds of soldiers and even two helicopters. “It was a real joke,” says one of the committee members, “to see the Israeli army looking for the Intifada cows.”

But here’s where things get more serious. Throughout the existence of the farm, the barn had been used by Palestinian activists wanted by the army for interrogation or arrest as a shelter. One such young activist, Anton Shomali, a cousin of the filmmaker, roosted with the cows, but left before sunrise. In the event farm workers ran into Anton, they wouldn’t speak to each other—“for security,” says a committee member, implicitly nodding to plausible deniability. When the cows were moved to a secret location, the activists kept up their interspecies cohabitation: What better place for a secret hideout than a secret hideout that worked for such conspicuous animals, too?

The 1991 Madrid Conference, where Palestinians and Israelis finally got together to negotiate, took the wind out of the Intifada and, by some accounts, marked its end. But the true death-knell of the uprising came with the signing of the Oslo Accords. Many of the residents of Beit Sahour involved in Intifada activism were disappointed by the accords, feeling that the deal was a good one for the exiled Palestinian leadership that had signed it, but at the expense of those who had made progress inside Palestine itself by organizing people on the ground. Nonetheless, residents of Beit Sahour approved of the deal by pouring out into the streets, car horns honking with approval. “We’re being fucked,” says one committee activist, “and we are celebrating.”

Discontented, several of the activists decided to stage one last Intifada demonstration. They hurled rocks at the military until the soldiers burst past the improvised barricade. Eventually, the soldiers chased down Anton Shomali, who was shot four times at close range with rubber bullets before being left on the street to bleed to death.

Anton’s fate shows how high the stakes were and the film reflected this; there are cows farting, sure, but there’s so much more. What’s remarkable is how much of the film’s themes of oppression and resistance remain relevant to this day. A Palestinian Authority now ostensibly exercises control over some of the West Bank, but the Israeli military can still go wherever it damn well pleases. And a movement to boycott Israel is again derided by Israeli hard-liners as a threat to the Jewish State’s security. Moreover, the reservations harbored about Oslo by activists have so far been borne out by history: Though the accords were set to create a Palestinian state within five years, now, almost a quarter-century after the deal was signed, hope for a two-state solution is rapidly receding.

And the cows? Their dwindling number and falling demand after Oslo made maintaining the small dairy farm economically unviable. The four remaining cows were sold to a butcher but, on the way there, one of them, a calf, escaped into the West Bank hills.