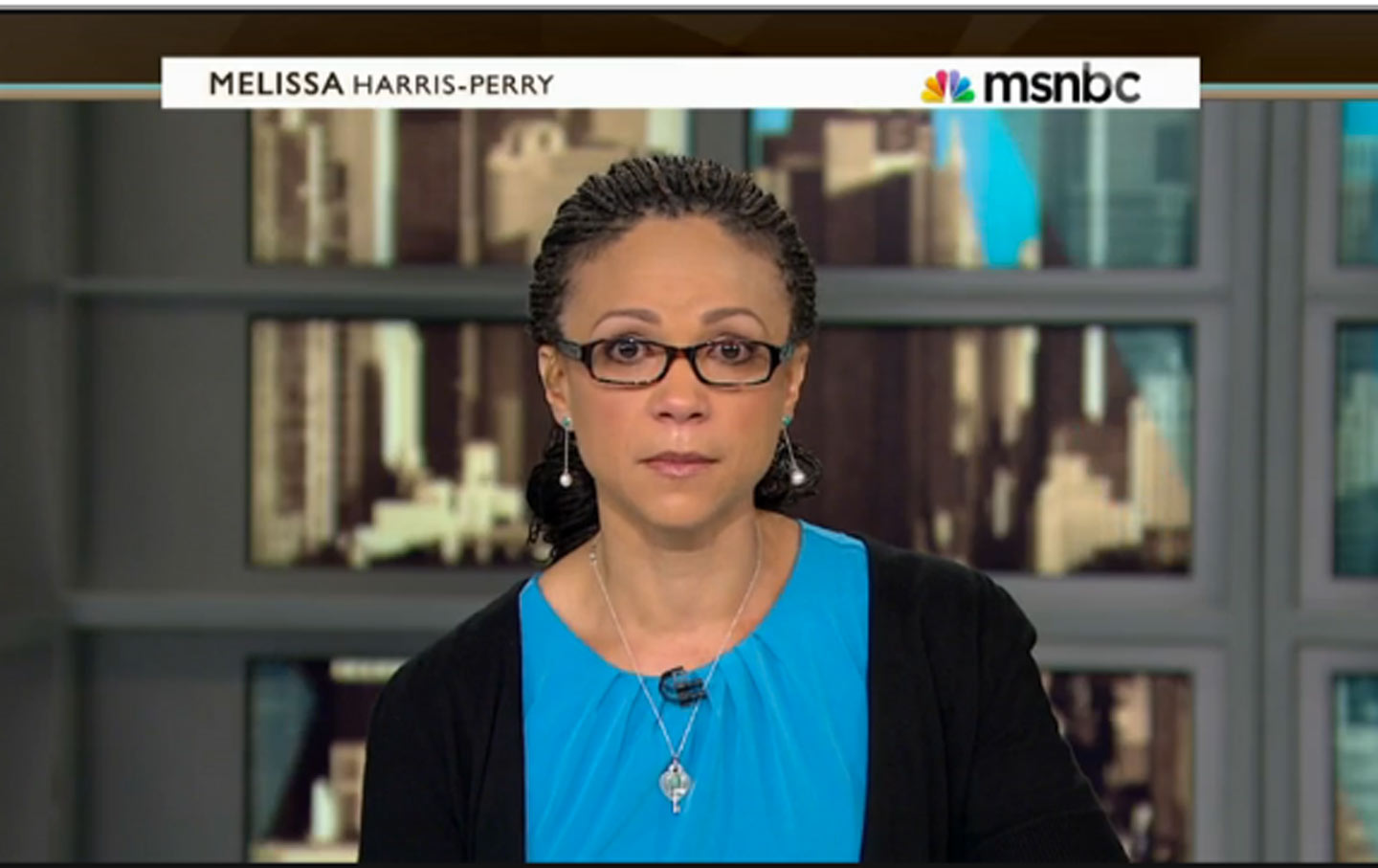 This weekend, a show that mattered to its audience as few programs on the vanilla ice-milk buffet that passes for news do, The Melissa Harris-Perry Show on MSNBC, was canceled, and it’s a tragic as well as angering turn of events. “Ties were severed,” as an MSNBC executive put it, after Melissa, who I am proud to count as a colleague, sent an email to her staff explaining why she would not be hosting her show this past weekend after several weeks of having the program pre-empted for election coverage. The “scorching” email, now public, is being cherry-picked in articles, particularly the part where Melissa wrote, “I will not be used as a tool for their purposes. I am not a token, mammy, or little brown bobble head.”

I want to encourage people to read it in its entirety, because that one section does not do justice to what she is trying to communicate. The part that stands out to me is when she writes,

MSNBC would like me to appear for four inconsequential hours to read news that they deem relevant without returning to our team any of the editorial control and authority that makes MHP Show distinctive. While MSNBC may believe that I am worthless, I know better. I know who I am. I know why MHP Show is unique and valuable. I will not sell short myself or this show. I am not hungry for empty airtime. I care only about substantive, meaningful, and autonomous work. When we can do that, I will return—not a moment earlier. I am deeply sorry for the ways that this decision makes life harder for all of you. You mean more to me than you can imagine.

Instead of responding to these concerns, network executives chose to simply kill the show, citing the email as “destructive to our relationship.” A nameless exec, speaking to The Washington Post, called her a “challenging and unpredictable personality.” It is certainly true that Melissa fought for her vision of what she wanted the show to be, but it is difficult to imagine that a white, male host would be attacked so personally and called “challenging and unpredictable” for exhibiting similar behavior. It also speaks volumes that such adjectives—“challenging,” “unpredictable”—would be seen as insults in the modern news media world, instead of high praise.

I suppose “challenging and unpredictable” mean decisions like the one she made for what we now know was her final show: a show based around the treatment of homeless people in San Francisco during Super Bowl week and the impact of Beyoncé’s “Formation” video, instead of ever more election analysis with campaign spinmeisters. MHP was the only show to discuss what the possible ramifications could be for Beyoncé if she performed the incendiary song later that day at Super Bowl halftime. It, of course, has caused a firestorm that has yet to die down. Melissa saw it coming. That, in a nutshell, was what made the show so distinctive. Because it discussed issues that other shows would not touch, with guests other shows would never dream of booking, it was able to see and often predict what they simply could not. (For what it’s worth, I was on that last show, a fact that I’ll wear going forward as a badge of honor.)

It would be difficult for me to fully express how upset I am. I’m upset because the staff on the show are some of the kindest people I’ve had the privilege to meet in an industry where the word “kind” is not often bandied about. I’m upset because I’ve met so many of these media anchors, and for a lot of them, the smile dissipates once the camera is turned off. Melissa was so warm off the air…to my mom, to my partner, to the very people other hosts breeze by.

I’m upset because the viewers of the show—the #nerdland community—felt like it was truly their space on network television. I can’t tell you how many times people have approached me or have come to events where I was speaking because they saw themselves—and by extension, me—as part of the #nerdland family. They were overwhelmingly black women; women who felt ownership of a show on which they and their concerns weren’t rendered invisible.

But most of all, I’m upset because of the voices that will not be heard. A Media Matters graph about diversity on weekend news shows reported that guests on Fox were 87 percent white; CBS’s Face the Nation were 88 percent white, This Week on ABC were 77 percent white, NBC’s Meet the Press were 78 percent white, and on MHP, 45 percent white. It was also the only show even close to a 50-50 split on gender. But MHP also wasn’t diversity for diversity’s sake. This was a show that introduced us to community leaders, academics, small-town politicians, and musicians who otherwise never would have seen the light of day.

And, speaking very selfishly, I was given a platform by Melissa to speak about sports and society in a way that centered on race, class, gender, sexuality, and big business. It was the only place where I was allowed—on Super Bowl Sunday no less—to write out a scripted commentary I could deliver on camera that called for NFL Commissioner Roger Goodell to resign. Being a guest on MHP was always “challenging,” always “unpredictable,” and I use those adjectives as the highest praise.

Melissa will be fine. She heads the Anna Julia Cooper Center and holds the Maya Angelou Chair at Wake Forest, where she lives with her beautiful family. She’ll be back on television when she wants to be, if she wants to be. I’m worried about the rest of us and a media landscape that is now less diverse, less interesting, and less accessible to masses of people in this country. But I want to thank Melissa Harris-Perry and everyone at MHP for showing us that another kind of network television news show was possible. I want to thank her for standing up, not for herself but for the show. I want to thank her for pushing the boundaries, even when those boundaries became walls. I’m excited to see what she does next, and also excited for the people inspired by her work, to step up and show us what they got. The #nerdland community will exist beyond MHP and will continue to inspire those trying to find their voice as well as anger all the right people.