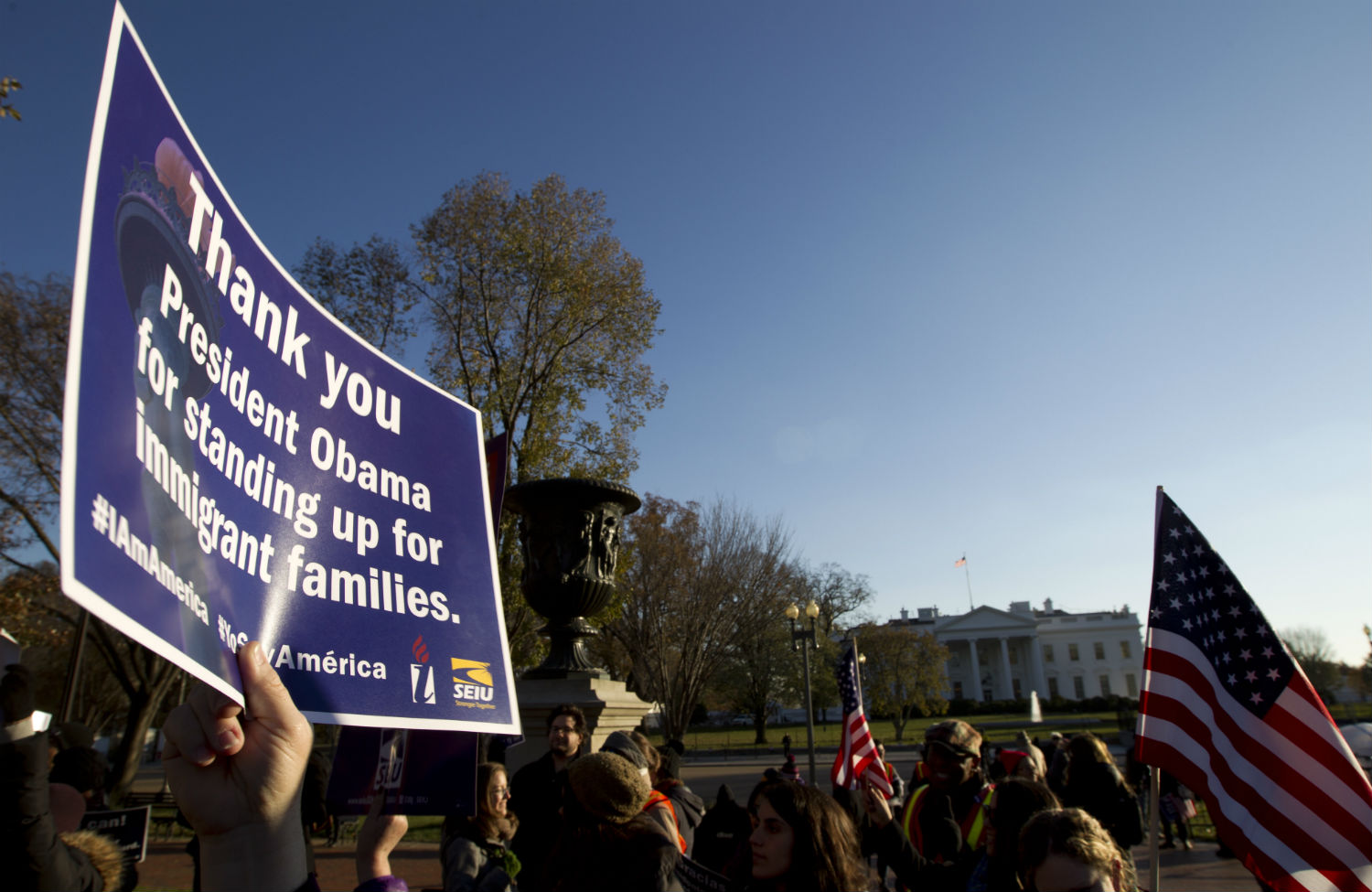 Supporters of immigration reform attend a rally in front of the White House in November 2014. (AP Photo/Jose Luis Magana)

For the immigrant-rights movement, Wednesday was supposed to mark a victory: the first day that thousands of undocumented immigrants brought to the United States as children could apply for work permits and a temporary reprieve from deportation under an executive order that President Obama issued last fall.

But late on Monday a federal judge in Texas blocked the implementation of those orders, taking the side of twenty-six states suing the Obama administration over the deferred-action programs. Homeland Security Secretary Jeh Johnson said Tuesday that the administration would appeal immediately to the US Court of Appeals for the Fifth Circuit, but will suspend its plans to accept applications until that ruling.

The injunction casts a shadow of uncertainty on people who have waited months for the orders to take effect. A delay will immediately impact up to 290,000 immigrants who are newly eligible for the expanded Deferred Action for Childhood Arrivals program, which was supposed to begin accepting applications on February 18. Another 3.7 million were expected to be able to start applying for work permits under Deferred Action for Parents of Americans program later this spring.

Rights groups are quickly adapting their organizing efforts to make sure that confusion and fear about what the injunction means doesn’t discourage people from preparing their applications. Immigrant, faith and labor groups, along with elected officials, are going ahead with more than 75 events planned throughout the country during the ten-day congressional recess. The press conferences and rallies are meant to show support for immigrants, as well as to put pressure on Republicans in Congress, who are currently holding the Department of Homeland Security’s budget hostage in an attempt to block the orders.

“It’s a political tactic aimed at intimidating and confusing the community,” Melissa Miranda, the Houston coordinator of Mi Familia Vota, said of the lawsuit. Her group held a press conference Tuesday morning with SEIU president Mary Kay Henry and Representative Al Green. “We were ready,” Miranda said. “We’re here on the ground doing the work that we can to make sure that people are informed correctly.”

Miranda and other organizers weren’t surprised that Judge Andrew Hanen sided with the plaintiffs in the case, at least for now. (Hanen has yet to rule on the legality of the executive orders; the injunction indicates there is a serious chance he might rule against the government.) Hanen, a George W. Bush appointee, wrote in an opinion last year that Obama’s immigration enforcement policy “endangers America” and is “an open invitation to the most dangerous criminals in society.” Many immigrants and allies say that Hanen himself is the reason the plaintiffs decided to file their suit in Brownsville, Texas.

“Republicans went out shopping for a federal judge, and they got the result that they were looking for in this battle,” said Arturo Carmona, executive director of Presente.org. “But we’re very confident that the executive order will stay.”

“We’re basically taking the view that this is just a pause in the process,” said Sundrop Carter, organizing director at the Pennsylvania Immigration & Citizenship Coalition. “Most folks are clear that [executive action] has always been a temporary fix. It’s not really what our movement is fighting for,” she continued. Carter noted that many people were deported while waiting for Obama to issue the orders, and that further delays could come with a human cost as well. Defending deferred action is just “one step in a long fight to make sure immigrant communities are treated with dignity and respect,” she said.

It’s not clear how the injunction will impact the fight over DHS funding in Congress. Some Republicans have said they might support a “clean” budget that doesn’t address Obama’s orders. Others say they’re not interested in ending their siege. “This ruling underscores what the president has already acknowledged publicly 22 times: He doesn’t have the authority to take the kinds of actions he once referred to as ‘ignoring the law’ and ‘unwise and unfair,’” Senate majority leader Mitch McConnell said in a statement. “Senate Democrats—especially those who’ve voiced opposition to the president’s executive overreach—should end their partisan filibuster of Department of Homeland Security funding.”

Injunction or no, the GOP will ultimately lose this particular game of chicken, which is supported only by the by the far-right fringe. In a recent Public Religion Research Institute poll, only 17 percent of Americans said that overturning Obama’s immigration orders should be the GOP’s legislative priority. A whopping 73 percent—and 62 percent of Republican respondents—said that the GOP should focus instead on passing a comprehensive immigration-reform bill.